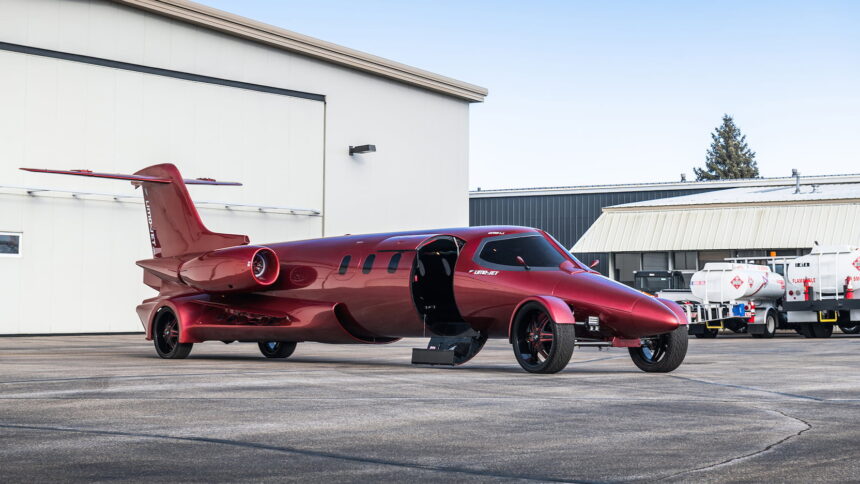 File this one under “this is obviously an April Fool’s joke” if you like, but it isn’t. Meet the 42-foot (13-meter) long Learmousine, possibly the most inexplicable car we’ve ever seen.

While we’re still all waiting for our flying cars — it’s 2020 after all — Dan Harris of Bend, Oregon, clearly had a completely polar opposite thought: what about a driving plane? After picking up the fuselage of a Learjet 40-family airplane, Harris and Exotic Coach set to work on a build project that took nearly 12 years.

For starters, the jet’s landing gear isn’t entirely suitable for road use. The little nose wheel would make for an interesting long distance driving experience, if serious stress was your thing. That meant the car/plane needed new wheels, requiring an entirely new steel frame which took over two years to research, design and build.

The end result is not unlike a custom hot rod. Learmousine’s new wheels are 28-inch Diablo Elite rims, with appropriately enormous 325/25R28 tires from Kumho. There’s not much information on the car’s braking system, other than that it is a hydroboosted system.

When it comes to motive power, two enormous jet engines is probably overkill, and might set the NHTSA’s teeth on edge with the prospect of having bird, cats, and small children sucked in. That notwithstanding, Exotic Coach got rid of the wings — for fairly obvious reasons — which is where the main fuel tanks for the jet sit.

The natural solution was a V8, which you’ll find mid-mounted. It’s a pretty hefty 8.1-liter Chevrolet Vortec V8 truck engine, good for some 400hp — a little down on the usual 4,000lb or so of thrust, but then the Learmousine doesn’t need to accelerate into the sky at 400mph. 65mph will be plenty, because the car is fully road legal.

However the engine nacelles remain, and are now home to parts of the 17,000W speaker system — so they can at least play jet engine sounds as you drive down the road. That leads into the limousine part of the Learmousine.

The cabin is now an 18-passenger party room. There’s a 42-inch plasma TV (the car build started in 2006 after all), along with further speakers, a bar and refreshment center and an infinity floor. Each of the leather seats is diamond-stitched.

Up front the pilot/chauffeur gets a custom showtime audio dashboard, with cameras and monitors for all corners of the jet. It does feature wing mirrors, but these seem to point mainly at those enormous speaker nacelles.

The winning bidder will also get a 44-foot Iron Bull trailer, and a 2015 Chevrolet 2500HD — in matching red — to pull it, which will be handy if you don’t fancy driving home in a V8 plane. If you aren’t sufficiently tempted, or still think this is an elaborate send-up, you can watch the Learmousine in action below:

Motorsports 67 Aug 2 by Andrew Evans
The 2018 GT Sport world champion Igor Fraga has had another weekend to forget in FIA Formula 3, after his car broke down during the sprint race at Silverstone. Perhaps…

Motorsports 67 Jul 19 by Andrew Evans
A third-lap incident in the FIA Formula 3 race at the Hungaroring robbed GT Sport world champion Igor Fraga of his first chance to score points this season. After two…