Logitech has just announced the all-new Driving Force GT wheel for Gran Turismo 5 Prologue! This is the first wheel of its kind that has a dial on the wheel itself to allow the user to adjust things on the car in real time, such as brake bias and damper settings. The force-feedback feature has also been given more power, and most importantly, the illuminated GT logo in the center can now be pressed to blow the car’s horn in the game. 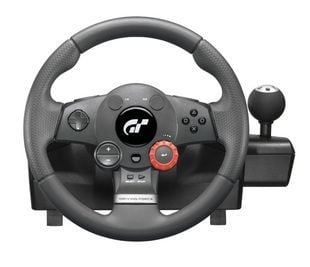 “The Gran Turismo series has always been designed for racing enthusiasts,” said Kazunori Yamauchi, President of Polyphony Digital. “The Driving Force GT racing wheel was designed to perfection by our team, specifically for the next generation of Gran Turismo.” Here’s some of the most interesting bits of the official press release from the 2008 Game Developer’s Conference today:

“Logitech’s latest racing wheel was meticulously designed by Logitech and Polyphony Digital, Inc., the developer of the Gran Turismo series. The companies worked together to add the unique realtime adjustment dial, a first for force feedback wheels, allowing people to fine tune the car’s balance by adjusting the brake bias, traction control and damper settings. Now Gran Turismo drivers can have precise control over the car’s setup to achieve maximum performance.”

“In the center of the 11-inch wheel, the Driving Force GT features an illuminated horn button with the official Gran Turismo logo. Using the authentic sounds of the car being driven, racers can quickly alert other cars when they are approaching fast. Or when playing online, people can simply use the horn to taunt other players as they speed by.”