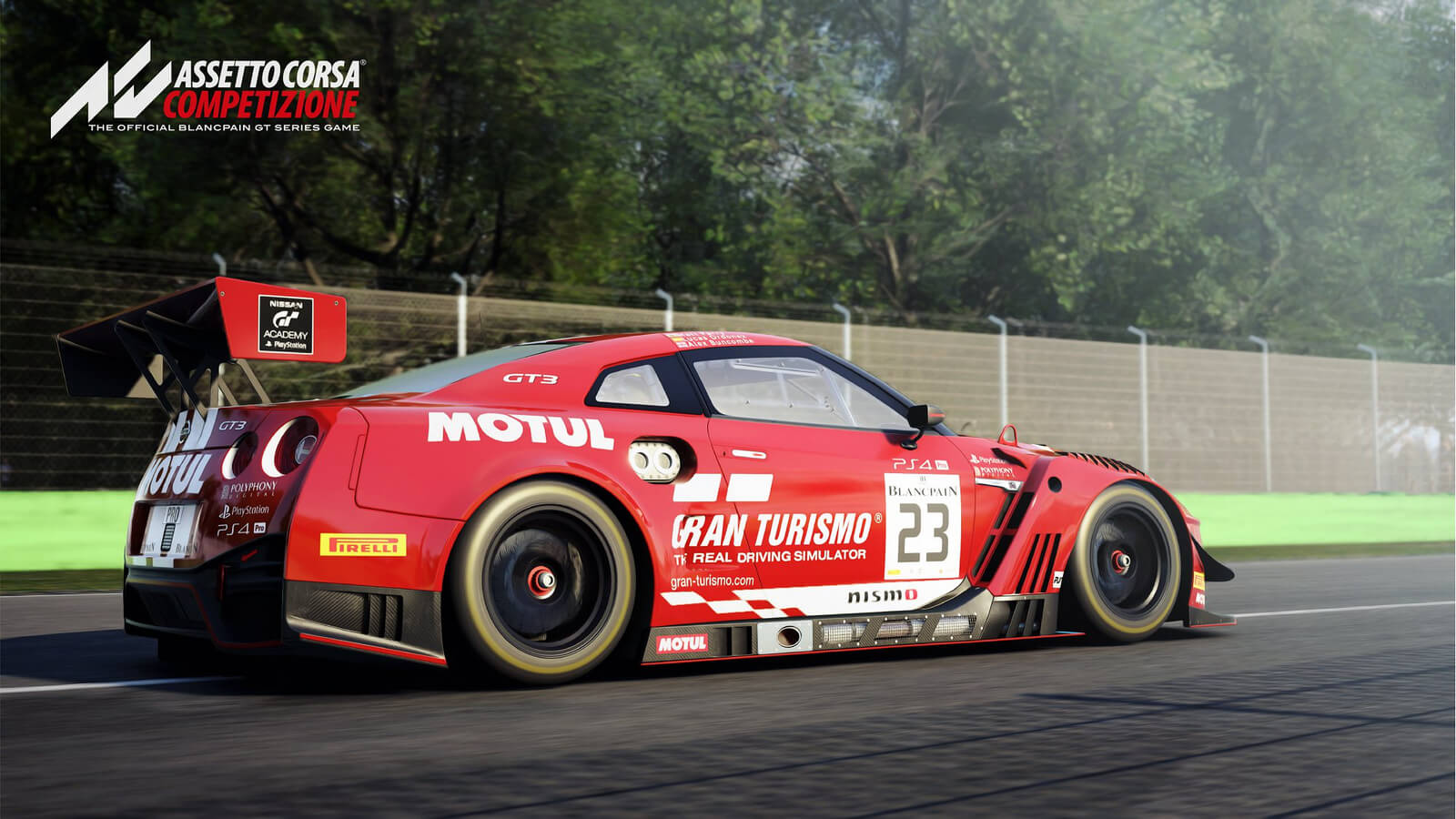 After a delay of nearly three weeks, Kunos finally allowed us to put our grubby mitts on the latest Early Access release of Assetto Corsa Competizione! With the addition of not one, but TWO Nissan GT-R GT3s, it’s fair to say I’ve been looking forward to it.

The original GTR GT3 was one of the most recognizable cars in the class, for one big reason: its size. The Nissan, quite literally, towered over the opposition. In a field of R8s, Z4s and 458s, you could always spot the Nissan.

I may have mentioned once or twice that, to drive, GT3 doesn’t excite me, but that’s where the Nissan is a little different. With its look and attributes, it’s a car that appeals to me through its character.

Before I drove Godzilla, I had the chance to speak to 2015 Bathurst 12 hour winner Florian Strauss about the 2018 car. He told me that for 2018, Nissan both lowered and pushed the engine back, improving the center of gravity. That, along with aerodynamic upgrades, made for a big improvement over the old car. It certainly feels like those improvements are represented in ACC.

Any other GT-R GT3 I’ve driven has certainly erred on the side of understeer. Lots and lots of understeer. With those upgrades, the car certainly doesn’t seem to lack cornering performance, at least in comparison to other representations of the GT-R.

Another improvement Florian talked about was the braking. With improved aerodynamics, it allowed the Nissan drivers to push the car into braking zones. With newly-released Monza’s numerous big stops, it gave me plenty of opportunities to test those details. Those improvements appear to be modelled here with the car showing plenty of poise and performance under heavy braking.

With this being ACC, you really have to take care while you bring the car up to temperature. It’s another example of excellent attention to detail in this sim. As the car warmed up, the GT-R became a hunter, a car I could attack the track and the opposition with. I know I’ve raved about it before but I don’t think any other sim does it as well.

As with the heating up process, the car also comes complete with the typically fantastic force feedback. On my OSW, I absolutely love how much information I get through the wheel. The FFB and the car feel so intuitive, so natural to drive and react to. To steal a GamerMuscle reference, the front end feel is very subtle but wonderfully detailed. I don’t think I can really ask for more.

So, was this update worth the wait? Without a doubt, yes. Yet another incredible car and highly detailed, classic track. I can’t help but be excited about getting stuck into some longer events, both online and offline, as ACC nears its full release.

Andrew Evans · Mar 8, 2019· Comments
The major 1.8 update for Assetto Corsa Competitzione is finally heading to ninth-generation consoles later this month, almost a year on from its appearance on PC versions of the game.

Andrew Evans · Mar 8, 2019· Comments
The long-hinted GT2 pack for Assetto Corsa Competizione has been confirmed, seemingly by accident, during a special live stream from the SRO Motorsports Group at this season’s 24 Hours of Spa.

Andrew Evans · Mar 8, 2019· Comments
The FIA Motorsport Games has announced that its esports competition will be staged in Assetto Corsa Competizione for the 2022 event, replacing Gran Turismo.

Michael Leary · Mar 8, 2019· Comments
Kunos Simulzione has revealed that the next DLC for Assetto Corsa Competizione is right around the corner, with “The Land of the Free” heading to PC on June 30.

Andrew Evans · Mar 8, 2019· Comments
Kunos Simulazioni has release the first official gameplay footage of its “next-gen” version of Assetto Corsa Competizione, and a little extra good news for players who just can’t wait: it will release the title early!

Andrew Evans · Mar 8, 2019· Comments
Kunos Simulazioni seems to be teasing some new content coming to Assetto Corsa Competizione in the near future, during the official v1.8 update stream to announce the new BMW M4 GT3.