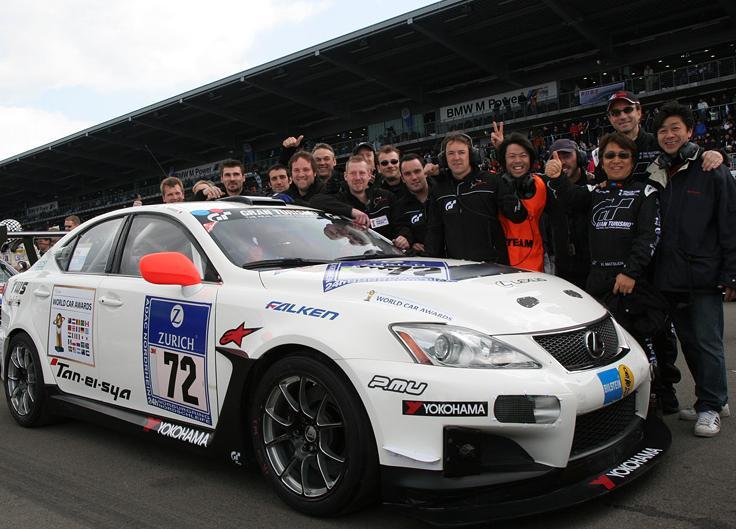 Onboard with Yamauchi at the Nurburgring 24h Race 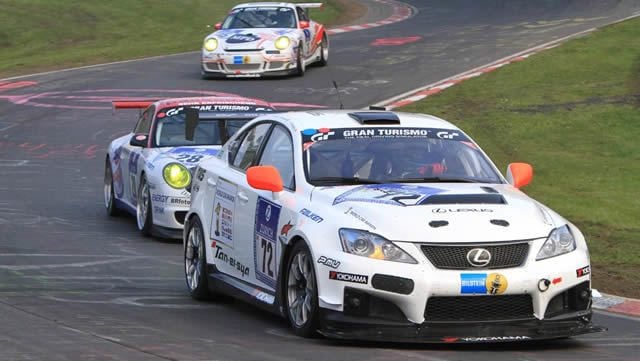 As you may recall, GT series creator Kazunori Yamauchi joined the Team World Car Awards for the 24-Hour Nurburgring race just a few weeks ago. Despite some mechanical troubles, they finished fourth in their class, with Yamauchi himself setting the team’s second-fastest lap at 9:48. Check out on-board video of one of his laps below, featuring his signature smooth-and-steady driving style. Congratulations to the whole team, and thanks to all who sent this in!

NURBURGRING, GERMANY (May 15-16) The 38th edition of the Nurburgring 24-hour classic turned into a sprint race from start to finish as the clouds, which threatened to drop more rain, parted to create cold but dry track conditions. Under the gaze of over 220,000 race fans, 197 race entries followed pace cars around the 25km-long track (combination of Nordschleife and GP F1 track) in starting grid formation before blasting through the start-finish line in a thunderous rolling-start.

A fuel pump problem forced the IS-F to pit costing around 25 minutes. Running at 6th in class as night fell, a brake issue led to another pit stop which was solved by switching to different brake pads. In the first of two night stints, ex-Indycar pilot Matsuda posted a 9 minute 58 second lap time, the team’s best night lap time. Just after Mildenhall handed over to Lyon for the mid-morning stint, severe vibrations from a split front spoiler forced the team to pit once again and repair the damage. Running at 5th in class, Yamauchi took the wheel and posted his fastest time of the race, a 9.48. That was just after Matsuda had recorded the team’s fastest lap of 9.46.

As wear and tear and accidents saw one-third of the field retire, Team WCA stayed in the race, gradually moving up the rankings until finishing 4th in class, just behind two Astons and a factory Lexus LFA.

Meanwhile, the focus of the race fell on the Manthey Porsche GT3 R, winner of the event for the last 4 years. Securing the race lead from an Audi R8 LMS on a lightning fast first lap, the Porsche met with disaster when it was taken out of the race after just 7 hours after a slower car collided with it. Then the Manthey Porsche 911 GT3 R Hybrid held the lead for 15 hours until a blown engine forced its retirement with just 90 minutes to go.

The eventual winner of the race was the BMW M3 GT2 which had qualified in 9 position, after four Audi R8’s dominated the first two rows. In second place was the Ferrari F430 GTC followed by an Audi R8 LMS.

At the prize giving ceremony after the race, Team WCA was awarded a trophy for 4th in class, a great result for a program which started in August 2009 with an SP8 class win in the team’s very first VLN 4-hour race. Gran Turismo driving simulator creator Kazunori Yamauchi also received a special trophy from the race organiser for “Distinguished Services to Motor Sport.”

Team WCA wishes to thank Toyota Europe, Gran Turismo, Alpine Stars and Yokohama Tires for their collaboration in this racing effort. Look out for race reports in magazines and websites around the world as WCA jurors cover the story.

Feedback data from the race car will be used in future Toyota models.

Kazunori YamauchiLexus IS-FNurburgring 24 HoursNurburgring NordschleifeVideos
The original comments for this post are no longer available.
Test Your Badge Knowledge With Our Car Logo Quiz

Car Culture 18 May 5 by Andrew Evans
The Bugatti name is inextricably linked with extreme opulence, and the latest product from Molsheim is testament to that. In partnership with carbon-fiber specialist IXO, Bugatti Lifestyle has revealed a…