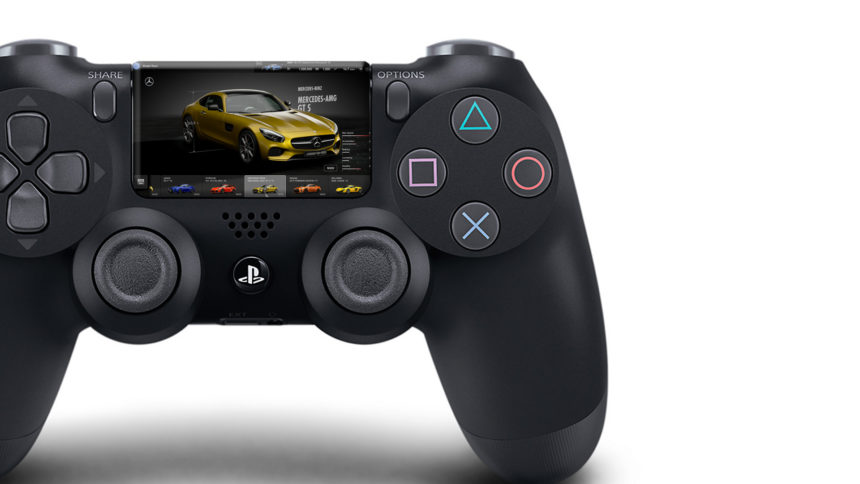 The next generation of video game consoles is on the horizon. If a new patent filed by Sony is a sign, we could finally have our first concrete look at what’s to come.

Sony Interactive filed the patent with the United States Patent Office on September 27, 2017. It reads as follows:

The intricate description is for none other than the current Dualshock controller. However, you may have noticed something different: the addition of a touchscreen. As it stands, the DS4 comes equipped with a touchpad roughly two inches wide. While the feature may not have many applications, was this Sony testing the waters?

The claims for the device paint an interesting picture as well. One claim describes a button along the top of the controller used for ” sharing gameplay to a social graph”. This sounds like Sony may be doubling down on the platform’s share functionality.

Furthermore, another claim suggests players can share one or more of an image, pre-recorded video, or stream gameplay. If this all sounds commonplace, that’s because it is. The difference, however, is this functionality focuses entirely on the controller itself.

You can read the patent in its entirety at the USPTO listing.

While it’s possible Sony plans to update the DualShock 4 with a touchscreen, we wouldn’t bet on it. For one, the DS4 doesn’t have the best battery life as is and adding a touchscreen would only exacerbate that. Moreover, the PS4 is entering the end of its life cycle — meaning this investment would fall to the wayside.

That leaves another possibility: PlayStation 5. It’s no secret Sony is hard at work on the ninth generation successor, but the question is “when”. While the console wasn’t featured at this year’s E3, analysts predict a 2019 release at the earliest. This is the closest yet to a potential first look at what’s in store for the fifth console.

Sony is no stranger to using a touchscreen. After all, the PlayStation Vita makes use of it to varying degree. As far as home consoles go, it would be the third, following the Nintendo Wii U and Switch. It will be interesting to see how Sony makes use of the tech moving forward as the two giants will no doubt be compared.

Of course, it’s just as likely this concept will never come to fruition. For the time being it’s best to exercise caution and take this with a grain of salt. We’ll find out for sure one way or another in the coming months. Stay tuned!

WRC Series 4 Nov 25 by Andrew Evans
There’s another new update coming along for WRC 9 in December, bringing along new stages, features and a remarkable new vehicle. The December update will add a vehicle that hasn’t…

Gran Turismo 5 55 Nov 24 by Andrew Evans
November 24, 2010. That’s the day that Gran Turismo 5, the first full Gran Turismo release on the PlayStation 3, first launched. It’s tough to accept that a decade has…

Gran Turismo Sport 1953 Nov 24 by Andrew Evans
While the finalists from the official 2020 FIA Online Championship season are fighting for their World Finals places right now, there’s still plenty of racing for the rest of us.…

Gaming 13 Nov 23 by Andrew Evans
The annual Black Friday shopping frenzy is almost upon us once again. What once was a single day of bargains in the USA has now extended to a week, or…

Gran Turismo Sport 587 Nov 23 by Andrew Evans
It’s all about racing cars in this week’s new set of GT Sport Daily Races, as players have a choice between three different types of racing machine. Race A this…