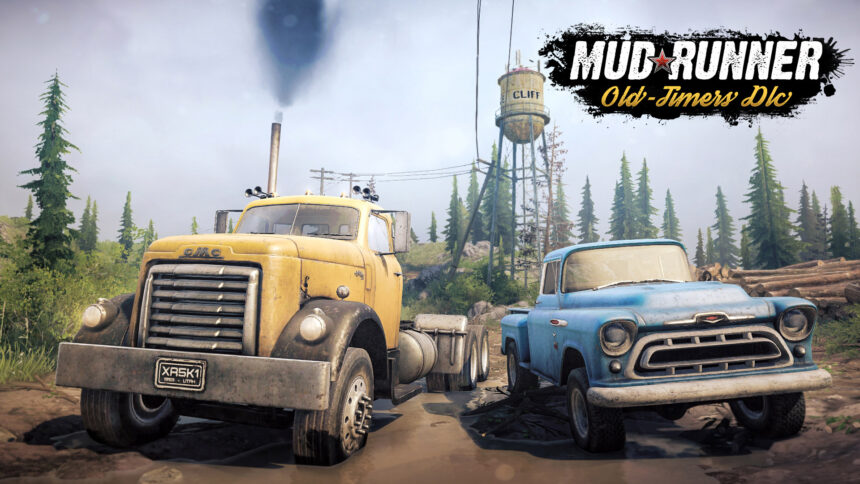 There’s a new DLC on the way for Spintires: Mudrunnner that will excite vintage truck fans. Called the Old-Timers DLC, it’s bringing with it some old school metal and a new map.

The map, called Rocky Hills, adds another American location to the game. This joins the two already available with the American Wilds expansion. However, you don’t need the expansion in order to enjoy the map.

Focus Home Interactive (FHI) doesn’t mention where in the US the Rocky Hills map is. But one of the new trucks sports a vintage Utah license plate. Given the tall pine trees and rocky landscape, northern Utah does seem likely. Also, the surrounding area of Wyoming, Idaho, and Colorado all are possibilities as well.

As for the trucks, both are real models instead of the fantasy vehicles that make up a majority of the game. These will join the list of seven licensed vehicles already in the game. 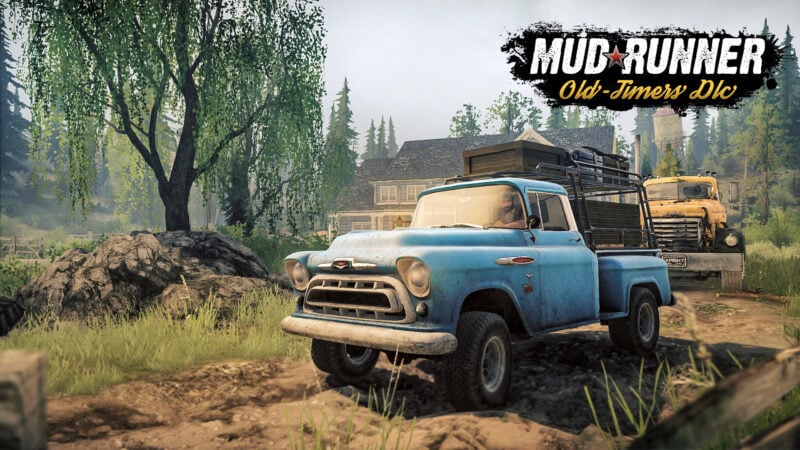 The first up is the 1957 Chevrolet NAPCO 3100. Meant as a scout vehicle it’s fairly small and should conquer the terrain with ease. It also has several attachments to outfit it for whatever duty you want to use it for.

There are even two unique attachments for the 3100. For hauling cargo there’s a loaded log cart that’s unique to the Rocky Hills map. There’s also a scout trailer that’s available on all the maps to aid in exploration.

Power for 3100 comes from a 4.6-liter V6 with an output of around 185hp. However, the truck’s real claim to fame is the 4WD system. Back in the 1950s GM didn’t offer its pickups as 4x4s from the factory. Instead, the buyer would need to order the truck with a conversion courtesy of Northwestern Auto Parts Company (NAPCO). This truck sports that system and should work well in the mud.

The second truck is the GMC DW950 and is definitely a workhorse. With a 7.0-liter Detroit Diesel 6-71 turbodiesel under the hood, it packs a serious punch. With 236hp and a whopping 630lbft of torque, it will make short work of hauling logs.

To help with the hauling duty, it also comes with several add-ons as well. FHI even dubs it the “king of attachments” and says you can customize the truck to meet any of your needs.

The Old-Timers DLC will launch on April 30 for the PC, PS4, Xbox One, and Switch. Even better, it will be available to players completely free of charge as well.

MudrunnerSpintires Mudrunner DLC
764 Comments Discuss this post in our forums...
Test Your Badge Knowledge With Our Car Logo Quiz

Gaming 24 Feb 26 by Andrew Evans
Milestone has revealed it’s developing a game based on that famous toy line from Mattel, Hot Wheels. The brands have worked together to create Hot Wheels Unleashed, which looks like…

Gran Turismo Sport 297 Feb 25 by Andrew Evans
GT Sport players have a new set of Time Trials for the next two weeks and, after the slightly unusual and seemingly unplanned change last time out, things are back…

Project CARS 3 34 Feb 24 by Andrew Evans
Update: Slightly Mad Studios has now confirmed some aspects of the Power Pack DLC. We’ve updated the article below to reflect this. The next DLC pack for Project CARS 3…

Gran Turismo Sport 184 Feb 24 by Andrew Evans
The latest game update for GT Sport has arrived. Weighing in at 176.8MB it is, as expected, not a major content update, but it does bring along some interesting changes…

Gran Turismo 7 281 Feb 23 by Andrew Evans
Gran Turismo fans will have to wait a little longer to get their hands on the next full entry in the series, as Sony has revealed the game won’t make…