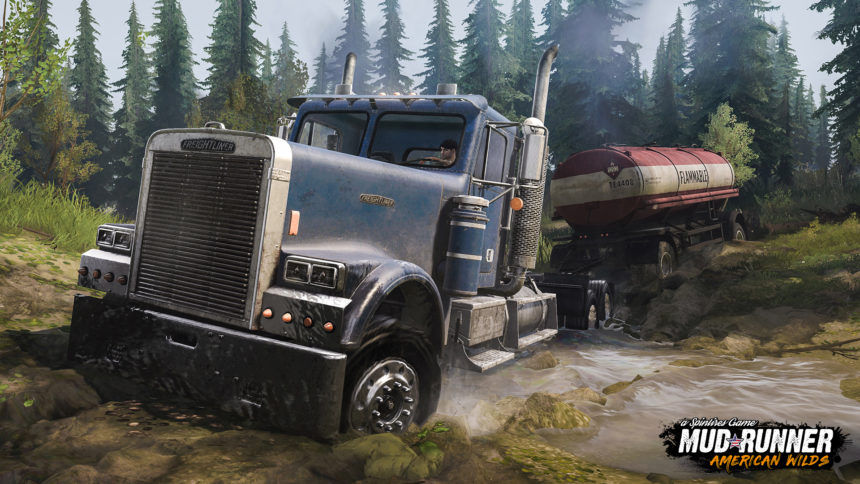 Last month, the American Wilds expansion landed for Spintires: Mudrunner on Steam, PS4, and Xbox One. However, if you had a Switch you were out of luck. That’s not the case any longer though as the game is now out on Nintendo’s system.

Unlike the standard version of the game, the Switch edition comes with all the DLC. This includes not only American Wilds, but also the Ridge and Valley DLC too.

Since it comes complete will all the available maps, it means players have plenty of options. Altogether, you can traverse 10 sandbox maps in Russia and America. There are also 11 challenge maps to really put your skills to the test.

The vehicle list remains the same too, including the seven new licensed vehicles. That list includes trucks like the Ford F-150, Western Star 6900XD, and Chevrolet Bison. In addition, Mudrunner also contains 26 fictional vehicles too. All of these, however, are based on Soviet-era rigs.

One major plus the Switch version has going for it is portability. Mudrunner can be played in either docked or undocked mode. This means you can take all the fun with you where ever you go. You can even sim off-road while you off-road for real if you want too.

Thankfully, the co-op feature for the game remains with the Switch too. So you can grab up to three of your friends and dive into a four-person co-op game. This will certainly come in handy when you bury your truck up to the doors in mud.

If you want to pick up Spintires on the Switch, it’s available on the Nintendo Game Store for $39.99. If you prefer a physical copy, it’s also available at most game retailers and Amazon.

You can check out the Switch launch trailer below:

American WildsMudrunnerNintendo SwitchSpinTires
492 Comments Discuss this post in our forums...
GT Sport Circuits Quiz: Can You Spot the DLC Track From These Detail Shots?

Gran Turismo Sport 11 Feb 28 by Andrew Evans
Since GT Sport launched back in October 2017, the Polyphony Digital team has brought an impressive number of new circuits to the game. From old favorites like Laguna Seca and…

Gran Turismo Sport 191 Feb 27 by Andrew Evans
The latest GT Sport update has arrived, with some new content to sink your teeth into and some gameplay tweaks. Polyphony Digital studio boss Kazunori Yamauchi cautioned over the weekend…

Gran Turismo Sport 191 Feb 26 by Andrew Evans
The next content update for GT Sport is on its way, and Polyphony Digital has released the official, reveal-all trailer. As revealed over the weekend, the keyword for 2020 is…