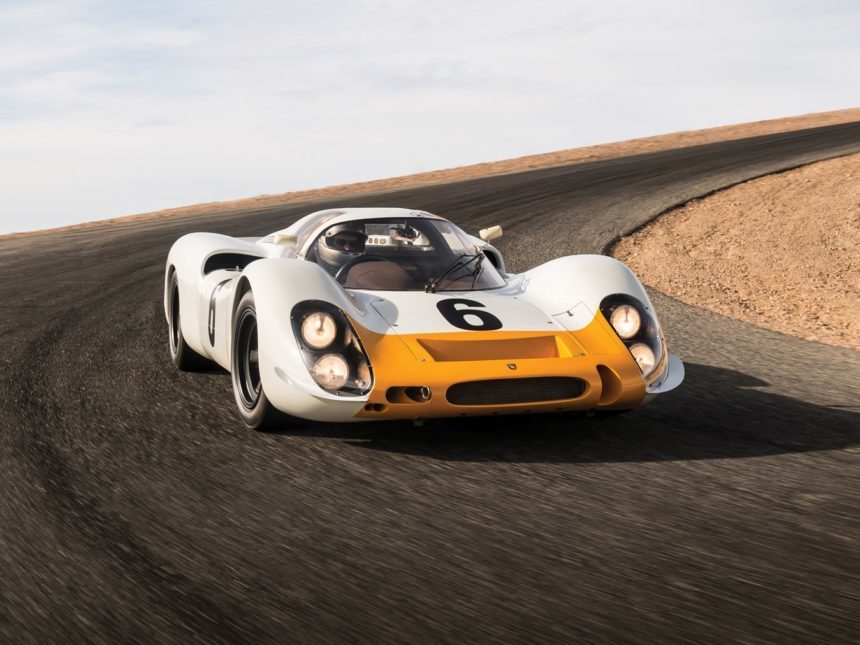 This Gorgeous Porsche 908K is a Chance to Own Racing History

Porsche’s been celebrating this year. It’s the brand’s 70th birthday, and this week’s Want is from another big year. We’re travelling back half a century, to a track-proven sports racer from 1968.

This is the 908 Kurzheck (German for “short tail”). An early example of the “Plastic Porsche”, this specific car is one of five short-tailed coupes. Porsche had built the car in response to the FIA’s new Group 6 rules, which limited displacement to 3,000cc. Engineers got to work enlarging the 2.2-liter engine of the 907, resulting in a 3.0-liter flat-eight. This little engine was a screamer: not only did it produce 350hp without the aid of a turbo, it did so at a heady 8,500rpm. In a featherweight 1,300lb chassis, that results in a Veyron-rivalling power/weight ratio.

This chassis (908-010) contested the 1000km Spa race in May 1968. With Vic Elford and Jochen Neerpasch sharing driver duties, the car’s fortunes looked good. Elford put the car fourth on the grid in qualifying, but torrential downpours dashed the team’s hopes. During his stint in the second half of the 71-lap race, Neerpasch slid off track around Malmedy, knocking over a telegraph pole — which in turn knocked him out.

Thankfully, Neerpasch suffered nothing worse than a slight concussion, but the car was out of the running. Its sister-car, chassis 908-011, did end up third, however. 010 returned to the factory, where it sat until a Swiss collector bought it. It remained with this owner until almost the end of the century, when American Porsche specialist Dale Miller bought the car on behalf of racer/collector Bill Ferran.

The duo put John Corson of Pine Plains, New York, in charge of the full restoration in 1999. Corson hunted down replacement parts and repaired what he could, and the refreshed car debuted at the 2004 Rennsport Reunion at Daytona.

In 2006, Portland’s Cameron Healy bought the car and brought it across the country, where it’s raced in vintage events since. It’s done museum duty, and was the Best In Class winner at the 2016 Forest Grove Concours d’Elegance. Healy has also secured its spot at the Rennsport Reunion at Laguna Seca this year, which is sure to be a big event, given Porsche’s platinum anniversary. We might even see the 919 Tribute attempt a lap record…

Speaking of Monterey, the 908K will be headlining RM Sotheby’s Monterey event this year, August 24–25. The lot listing offers a more detailed breakdown of the car’s history, and we’ve included a small sampling of the stunning photos below.

The afore-mentioned 011 sister car recently went up for auction. It sold for a cool $3 million in 2016. This car may lack the pedigree, but it’s still expected to easily clear the $2 million bar.

A little rich for your tastes? The newer 908/03 landed in Project CARS 2 as part of the Porsche Legends Car Pack last month. You can even take it around Willow Springs’ Horse Thief Mile like the video above!

PorscheWednesday Want
4 Comments Discuss this post in our forums...
Test Your Badge Knowledge With Our Car Logo Quiz