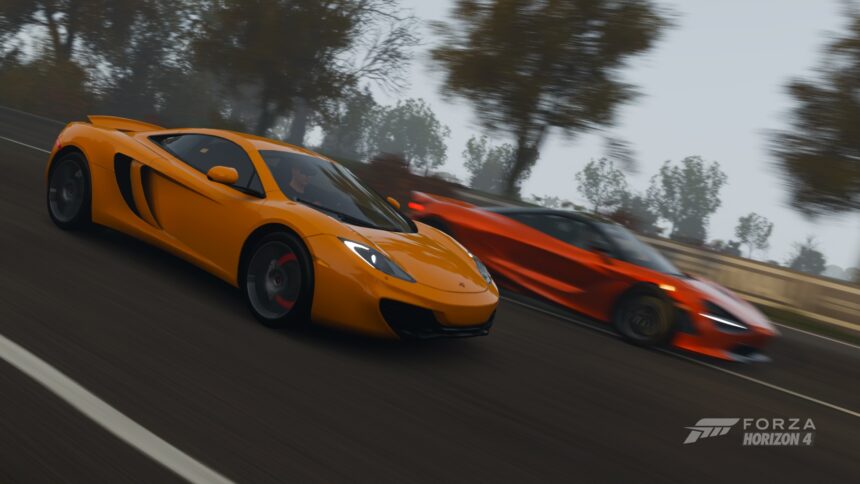 The newest season change is upon us in Forza Horizon 4. Autumn makes its presence known by bringing a fresh set of content for players who continue to seek out new cars for their collection.

This week’s events bring something for everyone. Read on further for our full breakdown.

The seasonal switcharoo means a fresh update to the Playlist. New prizes are also available for 50% and 80% completion for this season. This week puts previous rare cars in the spotlight.

Let’s dive in to the challenges available. 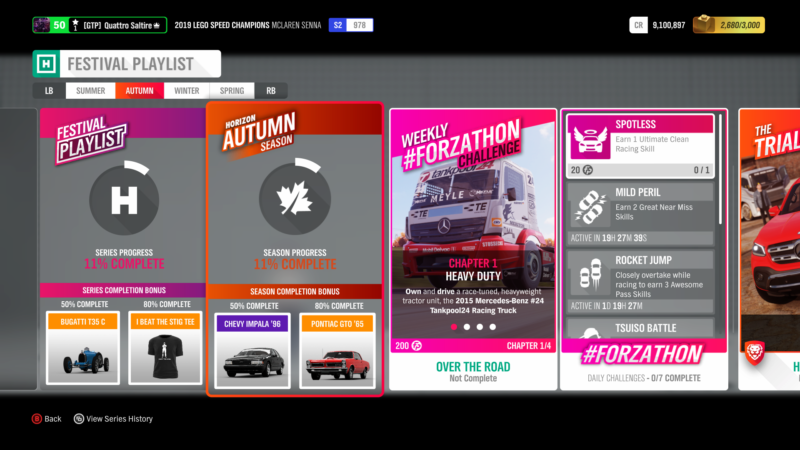 Prizes this week constitute returnees that have featured in prize pools before. The rarity of these cars should prove an attraction.

Leading the charge is the 1996 Chevrolet Impala SS. This big American sedan has only been seen in Forza Motorsport 4, and now it makes a long awaited return in Horizon. Like the Ford Crown Victoria, the Impala is most famous for its service as a police car.

As the flagship Impala, the SS comes with a 5.7-liter V8 engine. At 260 horsepower, performance won’t be particularly blistering due to the 4000lb weight.

Joining it is the 1965 Pontiac GTO. This American bruiser is regarded as the genesis of muscle cars. With a 6.4-liter V8 making 360 horsepower, the GTO remains an icon even today.

Leading the Seasonal prizes is the 2011 McLaren 12C. This thoroughly modern supercar was McLaren’s first road car since the mighty F1. Packing a 3.8 liter twin-turbocharged V8 with 592 horsepower, the 12C was thrust into direct competition with the Ferrari 458. Players can acquire the 12C by winning the “McLaren Cup” seasonal championship.

Returning to the prize pool is the BMW M3 GTR. Previously available as an 80% seasonal completion award in April, the M3 is now up for grabs with less daunting requirements.

The GTR was built as a homologation special and features a 4.0-liter V8 making 380 horsepower. The GTR can be acquired by winning the “FR Spotlight” championship.

The rest of this week’s events are listed below:

The Sky Is The Limit 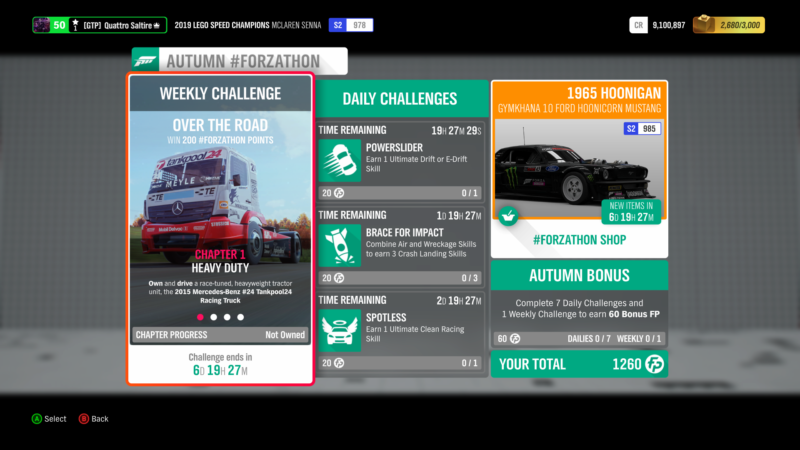 Forzathon goes big this week. The spotlight shines on one of the biggest vehicles in FH4; the Mercedes Racing Truck. The first objective is an easy one; own and drive this behemoth.

Next, hit the streets and win 3 Street Scene events in this unorthodox machine. For the third objective, unleash all 1,000 horsepower and earn a total of 3 stars from Speed Traps.

To finish up this week, prove your truck is king of the road by earning 10 Trading Paint skills. 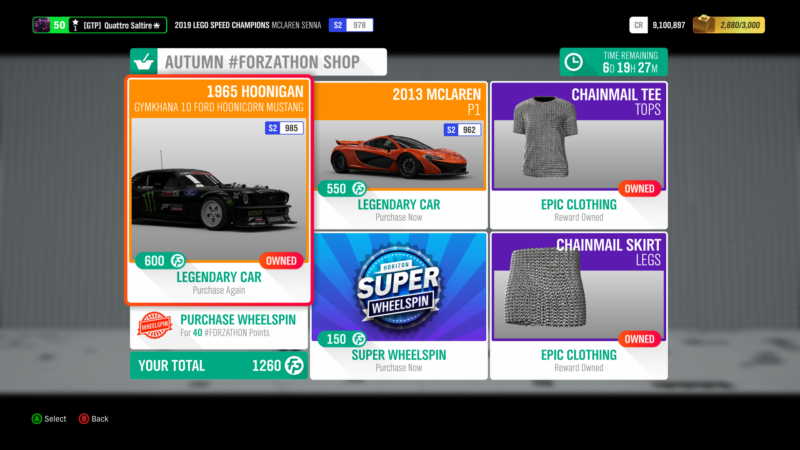 The shop lineup mainly comprises of big power for this week. Returning to the shop is the Ford “Hoonicorn” Mustang.

As the star of Ken Block’s Gymkhana Ten, the Hoonicorn isn’t short on power. The 6.7-liter twin-turbocharged V8 makes a substantial 1,400 horsepower. With a specialiazed four-wheel-drive system, the Hoonicorn will pull big skids all day long.

At 600 Forzathon Points, unless you picked one up earlier, we recommend spending points on wheelspins instead.

Sitting alongside the Hoonicorn is the 2013 McLaren P1. Woking’s flagship hypercar is one third of the hybrid “Holy Trinity”, packing F1-developed technology. The 3.8-liter twin-turbocharged V8 is mated to a hybrid system, which helps to produce a combined 903 horsepower.

Costing 550FP, the P1 will prove useful for those looking to win the Mclaren seasonal championship.

Colthing items for this week include the Chainmail T-shirt and Chainmail Skirt.