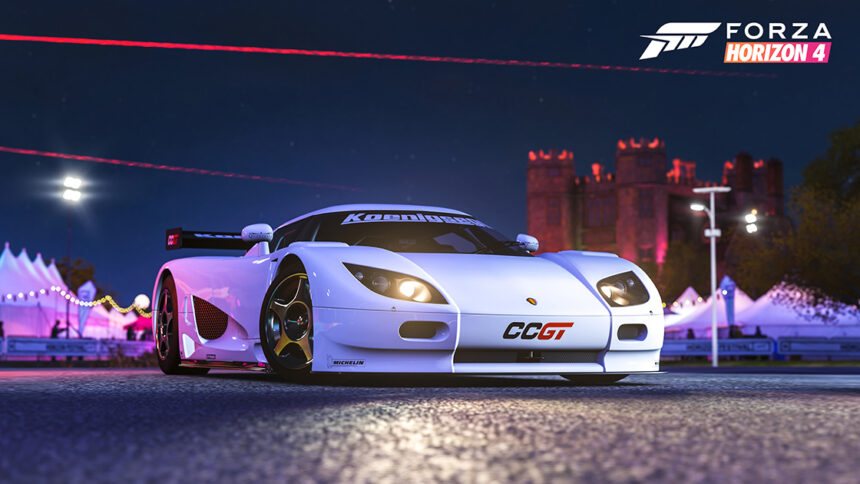 This Week’s Forza Horizon 4 Season Change: Spice Up Spring With a Rare Koenigsegg

Spring has arrived in the UK for another week in Forza Horizon 4. Series 15 is heading into the final stretch this week, with a new batch of content up for grabs.

The latest Playlist update has a new set of prizes available for 50% and 80% completion. A rare Koenigsegg racing car makes its debut this week. 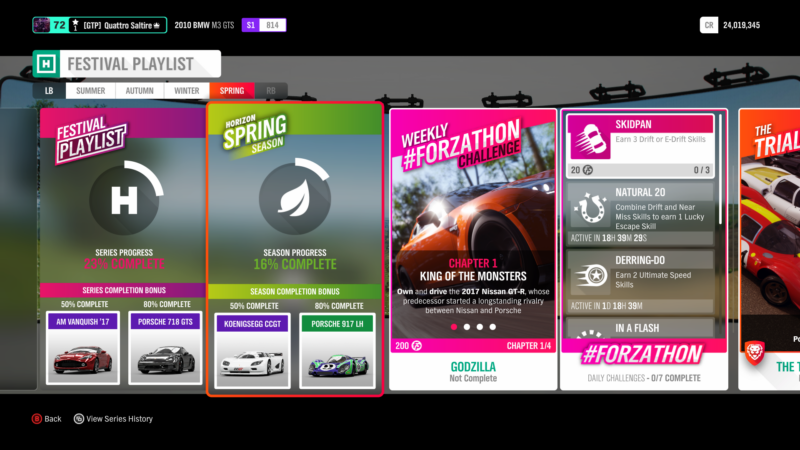 The big talking point this week is the return of a forgotten Koenigsegg racer. The CCGT was set to compete in GT1 racing, but rule changes meant it never saw any racing action.

Powering the CCGT is a 5.0-liter V8, a modified variant of the engine used in the CCR. Complying with GT1 regulations, power sits at 600hp. An enhanced aero package ensures the CCGT has plenty of downforce for tackling the winding roads of Britain.

Joining the CCGT is the legendary Porsche 917LH. This longtail variant also features the very distinctive psychedelic livery it sported in 1970.

Weighing in at just over 2,000lb, the 917’s flat-12 engine churns out 600hp which will propel it to almost 240mph. With rudimentary downforce, cornering is best done with a side of caution.

One of the stand-outs is the 1966 Porsche 906 Carrera 6. This racer was one of the unknown stars of the 1966 Le Mans 24 Hours, a race that was dominated by the historic battle between Ford and Ferrari. The 906 may have just 210hp from its 2.0 liter flat-six, but a stout 1,360lb curb weight means nimble handling.

You can acquire the 906 by winning this week’s Trial, “The Triple Threat”. 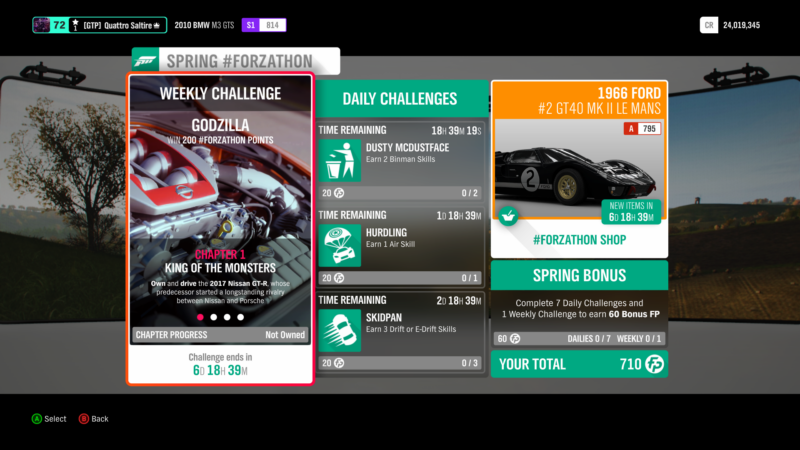 Forzathon looks at one of the most iconic names in motoring this week: the Nissan GT-R. Get things started by owning and driving the 2017 version of the car nicknamed “Godzilla”.

Next, prove the GT-R is a true monster by winning a Road Racing Series event at The Goliath circuit. The third objective will require more skill, as you’ll need to earn 3 Drift Tap Skills.

Finally, take some brave pills and earn 3 Daredevil Skills to finish things off this week. 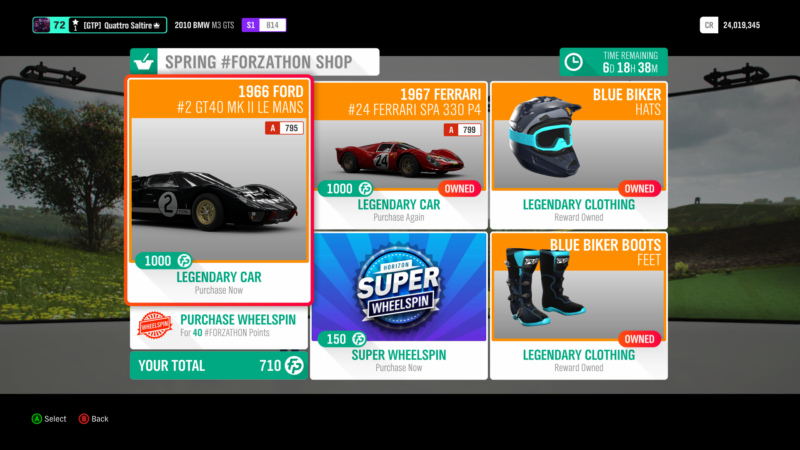 It’s Ford versus Ferrari this week in the Forzathon Shop, and its the most expensive lineup yet.

The 1966 GT40 Mk II became one of the most iconic racers of all time, after famously beating Ferrari at Le Mans to snap Maranello’s dominance. The GT40 sports a massive 7.0-liter V8 with almost 500hp. With that much power and era-appropriate handling, the GT40 will be a handful.

If that’s to your liking, the GT40 will set you back an eye-watering 1,000 Forzathon Points. If you choose to pick this for the Trial event, you’ll need plenty of points saved up.

Alongside it is the Ferrari 330 P4. The GT40’s legendary rival received numerous upgrades over the previous P3. The 4.0-liter V12 produces 450hp, combined with a weight of just over 2,200lb. Among other claims to fame, the P4 is noted for its own photo-finish at the 1967 Daytona 24 Hours.

The P4 will also set you back 1,000 FP. Unless you’ve bagged your choice from the Auction House or in a Wheelspin, be prepared for a very large dent in your wallet.

Forza Horizon 4 Season Change
5 Comments Discuss this post in our forums...
Can You Beat the Impossible Gran Turismo Quiz?

Forza Horizon 4 18 Feb 13 by Gary Slater
Love is in the air, and so is a new season in Forza Horizon 4. Summer has rolled around once more to kick off Series 19, bringing new content and new…