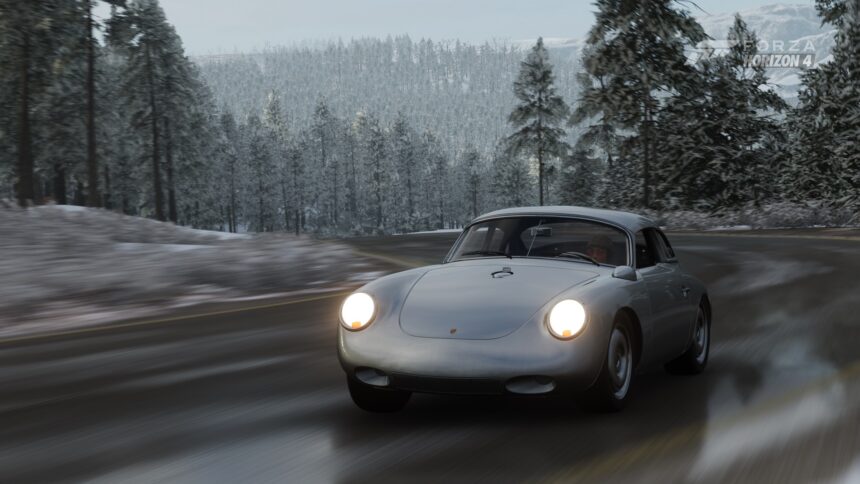 January is about to come to a close, but Winter is making its presence felt once more in Forza Horizon 4. The latest snowy season brings in the latest batch of new events and content to the UK.

A fresh Playlist update ushers in a new set of prizes for 50% and 80% completion. This week, a rather peculiar Porsche takes center stage. Our full content breakdown is below. 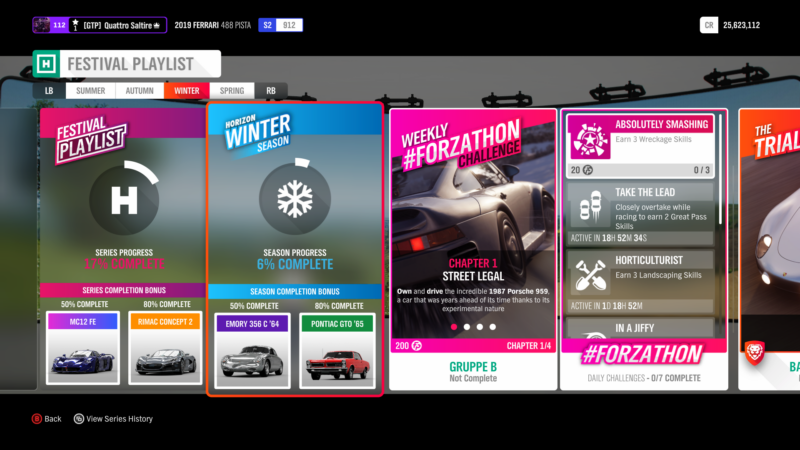 The main debut this week is the 1964 Porsche 356 C by Emory Motorsports. While this may look like a normal 356 convertible on the outside, it has actually been extensively restored and sprinkled with modern touches underneath.

Emory gives the engine given an extensive makeover too. The flat-four unit makes a healthy 220hp, giving the 356 the performance of a more modern car. Weighing in at just 2150lb, the Emory 356 should prove to be plenty of fun on the snow-covered UK roads.

If you’re after more power, then look no further than the 1965 Pontiac GTO. Considered the genesis of muscle cars, the GTO packs a hefty punch. Power comes from a 6.4-liter V8, putting out 360hp, but with some tweaks you can extract a lot more power.

The big standout prize doesn’t come from Porsche, but from Mercedes. 1955’s Mercedes 300 SLR is one of the most valuable cars ever made, but it also comes with legendary racing pedigree. The Merc is most famous for winning the Mille Miglia road race in record time. Its 3.0-liter straight-eight produces 310hp, on par with modern machinery.

If you fancy it, you can win the expensive Merc from the “Dirt Cheap” seasonal championship.

This week’s prizes are below.

The Trial: Back in Time (Co-Op Championship) 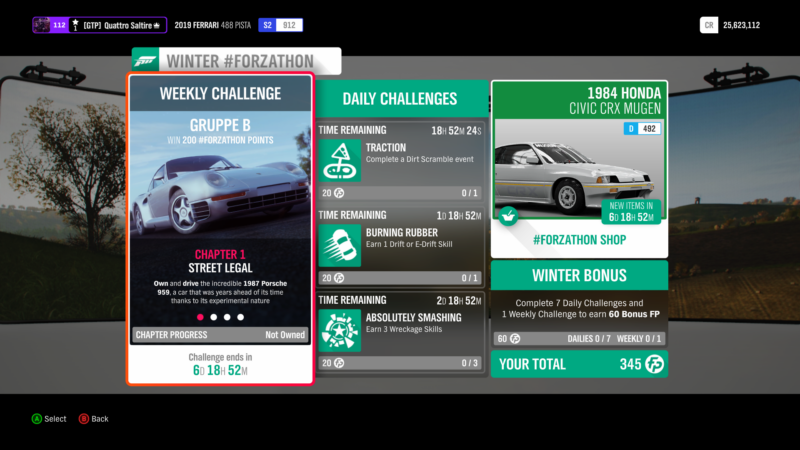 Forzathon continues the Porsche theme this week by taking a look at one of the company’s most iconic models: the 959. Grab this 1980s technological powerhouse to get started.

Next, showcase the 959’s surprising rally capabilities by winning 3 Dirt Trail events. Afterwards, prove its superiority on the streets by taking victory in 2 Street Scene events.

Finally, be sure to take some brave pills, as you’ll need to earn 10 Ultimate Near Miss skills to wrap up this week. 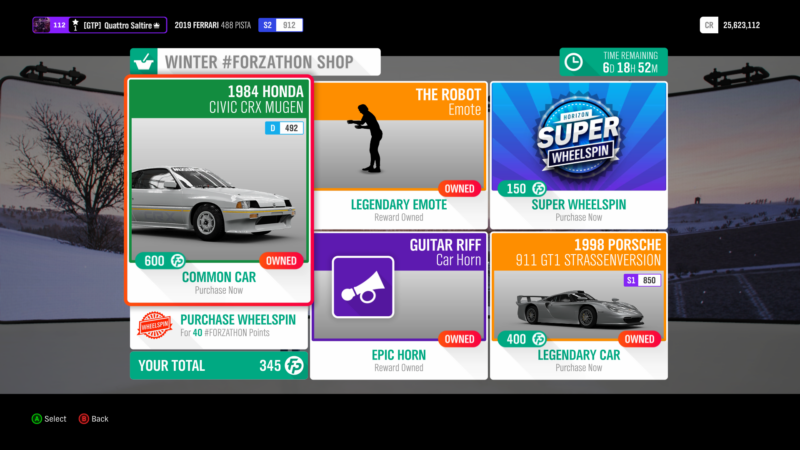 This week’s lineup is about two opposite ends of the performance spectrum. First up is the 1984 Honda CRX Mugen.

A diminutive hot hatch, the CRX marked the start of the partnership between Honda and Mugen, with the latter gifting the CRX with numerous handling upgrades. Still, with just 120hp from its 1.5-liter engine, you’ll need to thrash the CRX to get the best out of it.

The CRX will set you back a hefty 600 Forzathon Points. Unless you’re desperate for one, we advise to spend your points elsewhere.

On the other end of the performance spectrum sits the 1998 Porsche 911 GT1 Strassenversion. This GT1 homologation special sits far apart from the regular 911 road car and shares very little components. The 3.2-liter, twin-turbocharged flat-six puts 536hp on to the road, which could prove tricky in the snow.

Despite lofty power and performance, the 911 GT1 is a cheaper proposition, at just 400 FP. If you’re after one of the most iconic GT1 cars, then the Porsche is the one to go for.

Novelty items up for grabs in the shop this week are the Robot dance emote and the Guitar Riff horn.