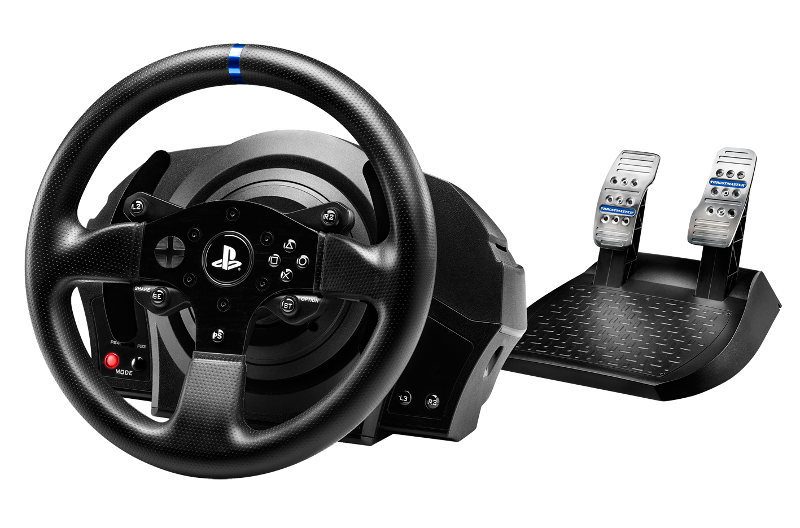 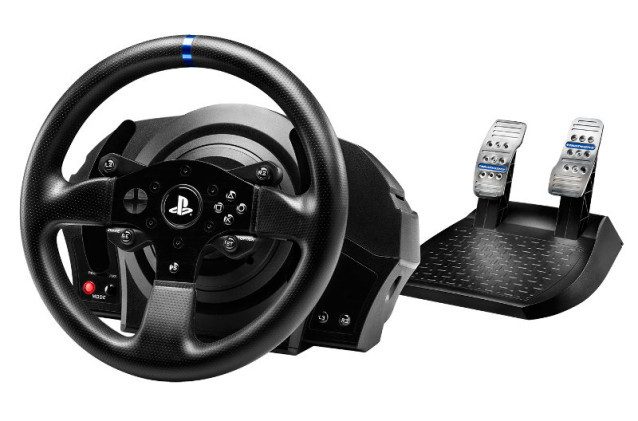 When Thrustmaster released the T500RS as the officially-licensed wheel for Gran Turismo 5 back in 2011, it made quite an impact on the sim racing hardware market. Featuring sturdy construction, high-quality materials, and wide availability among retailers around the world, it got the attention of many enthusiasts looking for a PS3 and PC compatible wheel.

The T500RS has been widely praised, and Thrustmaster is looking to repeat their success on the latest generation of consoles with the new T300RS, which first hit the market late last year boasting full compatibility with the PlayStation 4. Although the model number may be smaller, the T300 is packed with new technology that supposedly makes it more precise, more durable, and more engaging to use than its older brother. As a satisfied owner of the T500RS, I was curious to get my hands on the new hardware when Thrustmaster offered to send over a T300RS for review (the company has also purchased advertising on GTPlanet in the past).

My first impressions unboxing Thrustmaster products have consistently been positive; it’s easy to see why Sony – a company very protective of its brands – has entrusted Thrustmaster with building officially licensed PlayStation and Gran Turismo accessories. They are well packaged and documented, with clear instructions and diagrams. 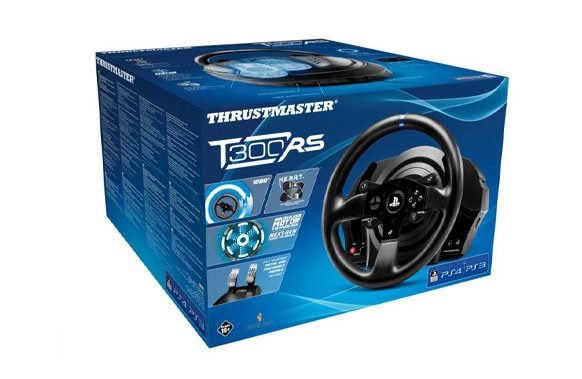 Setup was a breeze, and I was pleasantly surprised to find the provided cables offered more than enough length to accommodate my rather unorthodox configuration (if you’ve ever struggled to plug in a USB or power cable that’s just a few inches too short, you know how important this is!); it even features as internal power block, so there’s less clutter. As with other wheels, the T300RS includes both a table mounting bracket and M6 threaded screw holes, so you can clamp it to a table or attach it to a driving rig. 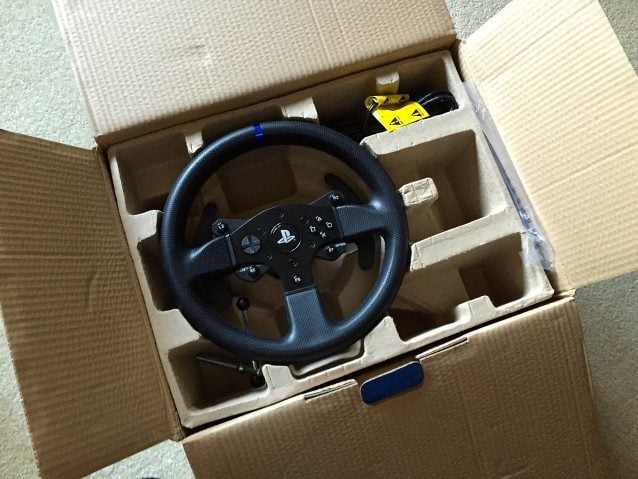 One of the T300’s main selling points is compatibility: it works out-of-the-box with the PlayStation 4, PlayStation 3, and PC, thanks to a switch that changes the wheel’s mode. This means that – aside from the Forza Motorsports series on Xbox One – you’ll be able to use it for all of the most popular racing games for years to come (if you are looking for Xbox compatibility, check out the Thrustmaster TX).

How does this compare with the T500? Although the T500 can work with the PS4, support for every game is not guaranteed – it’s up to each game developer to decide if they want to support the older hardware (you can find a list of currently supported titles here). The T500 is also lacking PS4-compatible “PS” and “Share” buttons. The T300, by contrast, offers full functionality on both the PS3 and PS4, so you can ditch the controller and use the console with the wheel alone. Although this may seem like a small feature, the simple convenience of hopping into your driving rig without having to juggle and keep track of a controller should not be overlooked.

Compatibility aside, I found the new button layout on the T300 to be much improved over the T500. The L2, R2, Select, and Start buttons have been moved closer to the thumbs, so they can be reached without having to remove your hand from the wheel. The T300 also features more traditionally-mounted paddle shifters, which are attached to the back of the wheel and rotate with it (this is in contrast to the T500, which was often criticized for its stationary paddles). 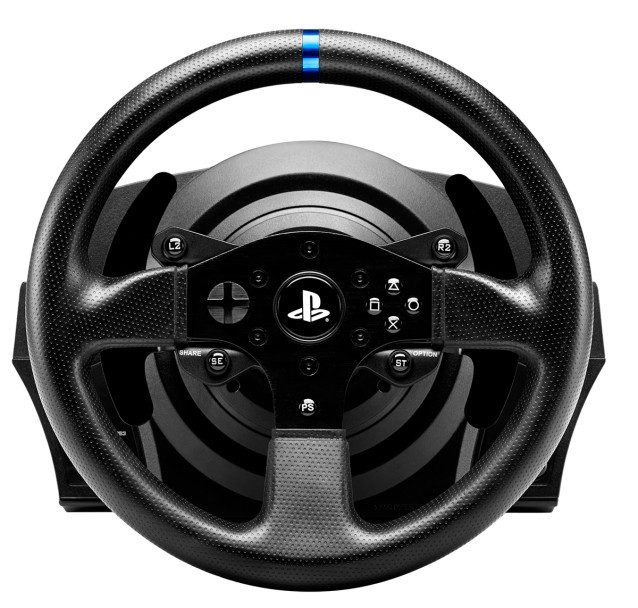 Although I had grown accustomed to the T500’s stationary paddles, I was never particularly fond of them, and I did occasionally miss mid-corner shifts when my fingers were out of reach. This problem is completely resolved with the T300, and its paddles present a nice, solid click, with a short travel that is surprisingly satisfying. Although it’s probably psychological, it makes me feel like I’m able to execute shifts faster on the T300 and it’s more fun doing so. 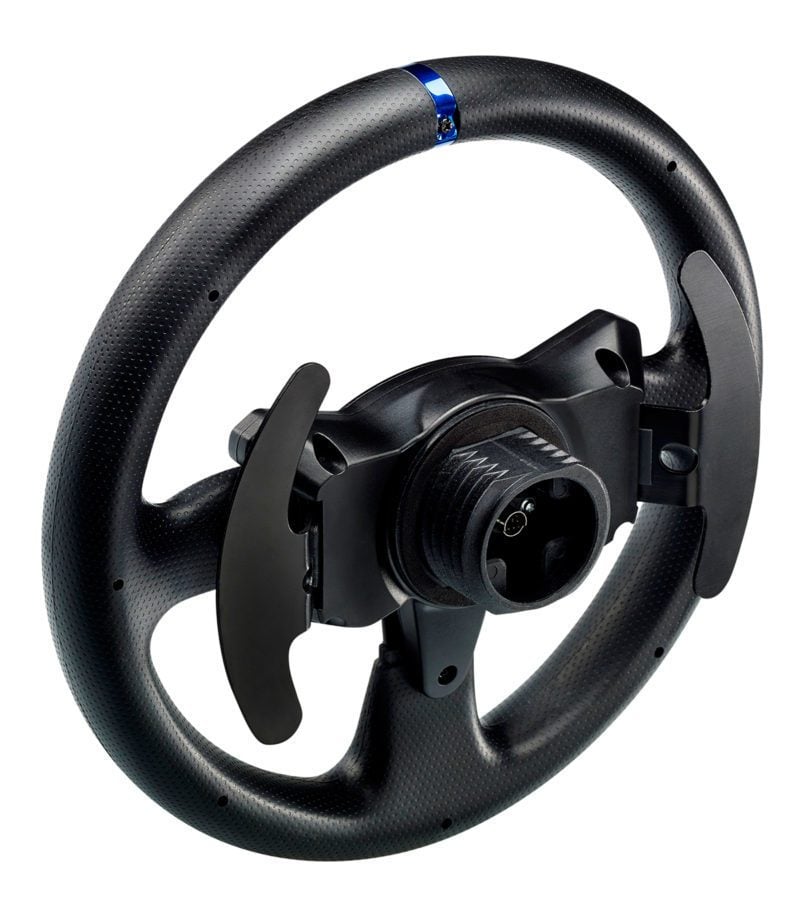 This would be a good time to mention that the T300RS is fully compatible with all of the rims produced by Thrustmaster, including the Ferrari GTE wheel (458 Challenge Replica Edition), TX wheel, the Ferrari F1 replica wheel, and even the T500 rim. The rims can be swapped using a quick-release mechanism, but it’s not entirely plug and play – you will still need to grab a screwdriver to make the switch. For me, the stock T300 wheel remains the best choice: it’s a good size and feels nice in your hands.

The real pleasure with the T300RS, however, comes from the wheel’s new force feedback motor: it’s strong and exceptionally smooth. It is a treat to drive in Gran Turismo 6, and the more communicative PC simulators such as iRacing and Assetto Corsa feel even better. The wheel even helps games with more “arcade” physics, such as DriveClub, feel more immersive.

The smooth torque delivery makes the force feedback feel more natural, and allows the nuances of the track surface and the car’s behavior to be communicated more fluently into your hands. The sensation is not only smooth, but powerful – you’ll get quite a workout with stronger force-feedback strength settings, and it should be able to satisfy players who enjoy a more aggressive wheel. According to Thrustmaster’s documentation, the T500 can still produce more force, but I wasn’t able to tell much of a difference in my testing (I personally prefer medium-light force feedback settings, where the T300’s smoothness is most apparent). 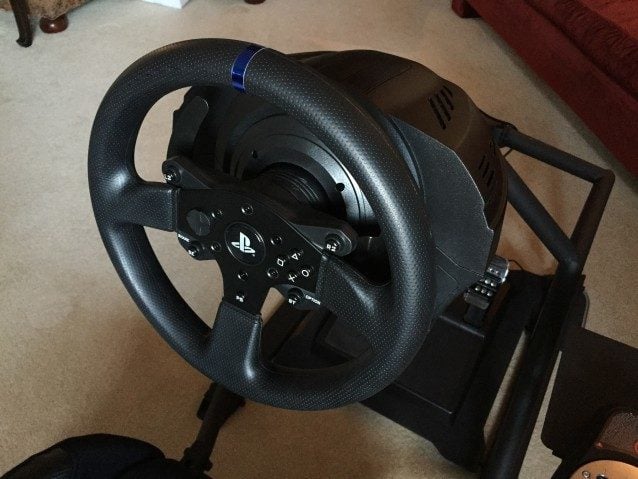 The T300’s power delivery feels “frictionless” because, in some ways, it is: it uses an industrial-grade brushless servo motor, which is typically only seen in higher-end wheels which are considerably more expensive.

A technical discussion on the merits of a “brushless” DC motor are beyond the scope of this review, but you can learn more about the technology here. To summarize, there is less friction inside the motor, so it’s quieter and more durable. The T300 also employs Thrustmaster’s “H.E.A.R.T.” (“Hall Effect AccuRate Technology”) system, which uses magnets to detect the wheel’s steering position without the need for any moving parts. There is a small fan inside the T300 which turns on during heavy use; you’ll hear the fan if there is no sound coming from the game, but it never got loud enough in my testing to be heard over the television’s speakers.

It all contributes to one of the best experiences to be had at this price point, wrapped in a handsome package that should be able to withstand plenty of abuse.

Such an outstanding wheel can make the pedals seem a bit of an afterthought, though: unlike the T500, which included three pedals that could be mounted in a top-hinged configuration, the T300’s included pedals are much less sophisticated (though to be fair, the T500 is $200 more expensive!).

Although they remain overshadowed by their clutch-touting counterparts, they are not necessarily bad; the brake pedal has more resistance than the throttle, and will serve most T300 owners well. Note that they do lack grip on carpeted surfaces, which may cause an issue if you will not be mounting them inside a dedicated rig. 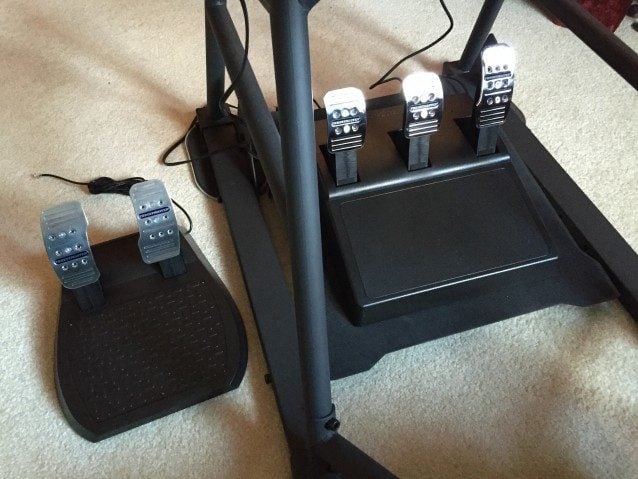 The T300’s included pedals on the left; the T3PA pedals (sold separately) on the right.

More serious sim racers, however, will be happy to know the wheel can be used with a wide range of Thrustmaster-compatible pedal sets (including those from other manufacturers). Although the T300 is not unique in this regard, such interoperability is a very important feature for any sim racing product so you can mix, match, and upgrade accessories to your liking.

So, should you buy one of these? If you’re in the market for a wheel and have the budget, you can’t go wrong with the T300RS. The durability and exceptional feel provided by the brushless motor, full PS3, PS4, and PC support, and a reasonable price tag will make it a practical and attractive option for years to come. If I had to choose between the T500 and T300 today, I wouldn’t hesitate to go with the T300.

If you already have a T500RS, though, don’t fret too much; although the T300 has its advantages, you still own one of the best wheels on the market, and its popularity should help ensure that game developers continue to support it throughout the PS4’s lifespan. For aging Logitech wheel owners looking to make the jump to latest generation of consoles while maintaining compatibility with older titles, however, the T300RS will be a significant upgrade.

You can purchase the T300RS here on Amazon (if you found this review helpful, ordering via any of the affiliate links in this post will help support GTPlanet). Please leave any questions in the comments below, or stop by our Sim Racing Hardware forum for more in-depth discussions with other enthusiasts and T300 owners

Thrustmaster
The original comments for this post are no longer available.
Test Your Badge Knowledge With Our Car Logo Quiz