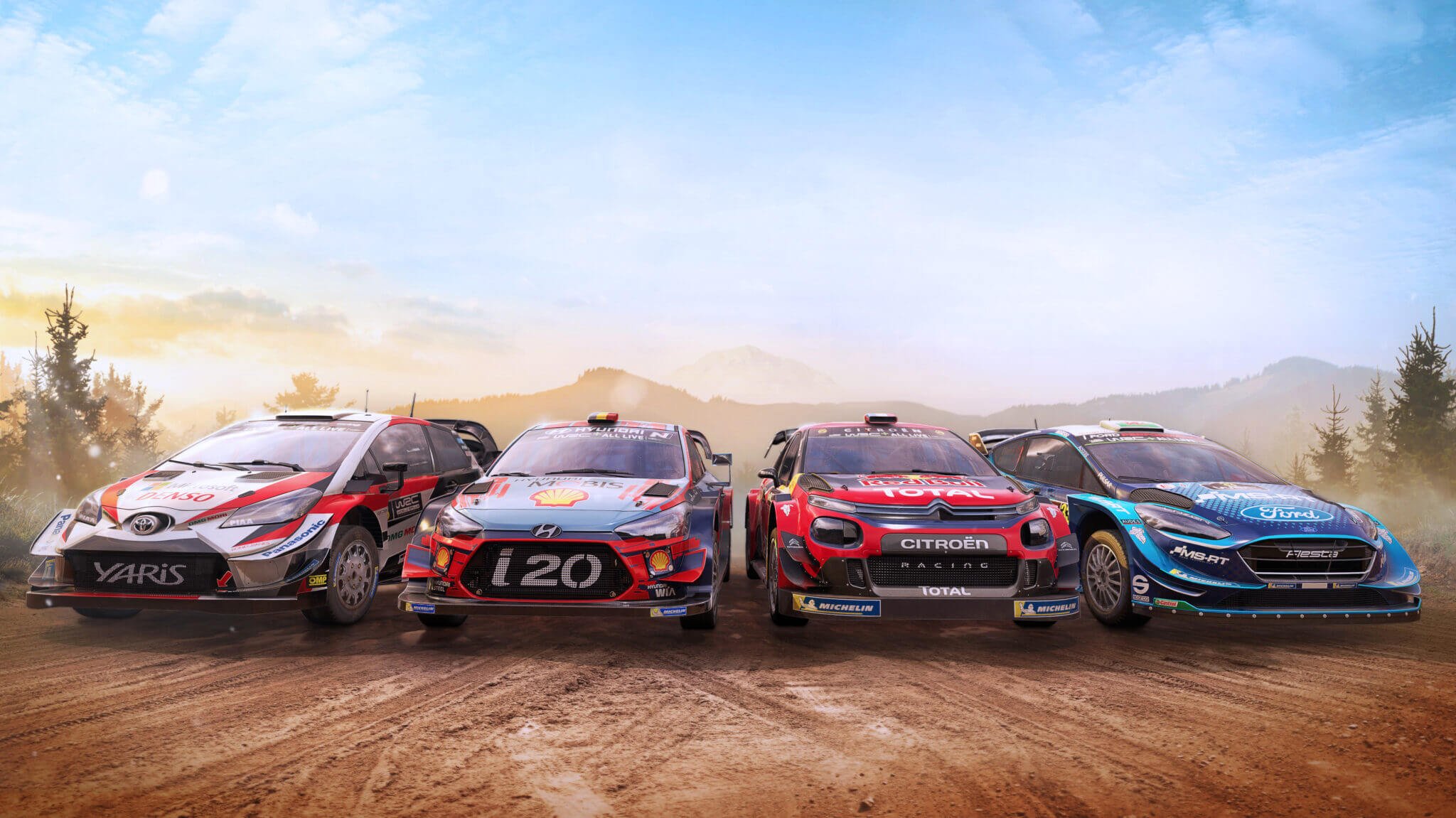 If 2017 was the year of circuit-based sim racing, and 2018 was all about arcade racers, rally is undoubtedly in the spotlight this year.

It began back in February when DiRT Rally 2.0 touched down. Now Kylotonn Racing is back on the grid with WRC 8. Boasting the official blessing of the eponymous sport, and getting an extra year’s development time under its tires, is WRC 8 a worthy competitor for Codemasters’ acclaimed — but certainly not perfect — rally sim? We’ve spent a week with it to find out.

WRC 8 released Thursday, September 5, on PS4, XB1 and PC. Bigben Interactive provided a pre-release version of the game for review on Xbox One. I played it on Xbox One X, with both a pad and the Fanatec CSL Elite PS4 wheel (with P1 Elite rim). 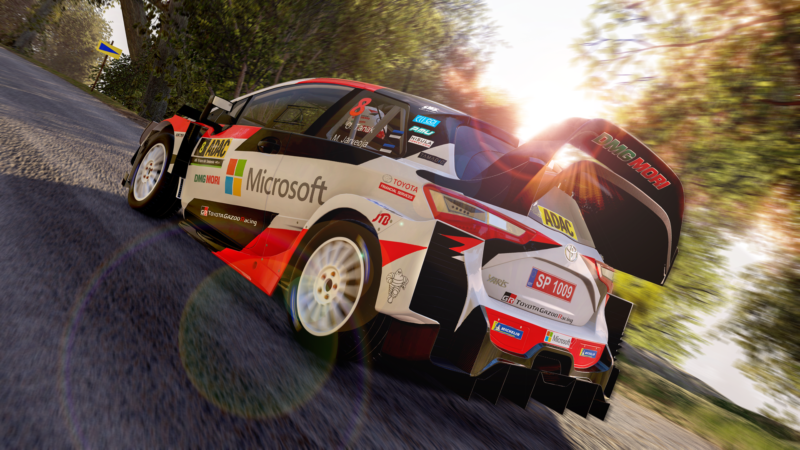 For a title focused on an already niche aspect of motorsport, WRC 8 packs in a strong suite of content.

Like previous installments, the entire season lineup — in this case, 2019 — is present and accounted for. That means every car, team and class, from WRC Junior up to the big show. The full calendar is here too, with 14 locations. The two year gap from 7 drops Poland, but adds Turkey and Chile. There’s also a large open-world area for players to practice in. It’s a welcome addition, though we do wish the reset-to-road function was disabled here, if even just to explore the team’s work.

Kylotonn solidifies its position as the best rally stage designer in the business. There’s so much variety on offer here, from the stunning high-speed dirt runs in Mexico to the utterly claustrophobic climbs at Monte Carlo. Every location has its own distinct feeling, and the long-form Epic Stages return to truly test players’ skills with 13-mile behemoths. It will take you a long, long time to truly master these routes.

Layering on top of these excellent stages is a new dynamic weather system. It makes every rally more unpredictable, and stresses the importance of a good meteorologist on your team. 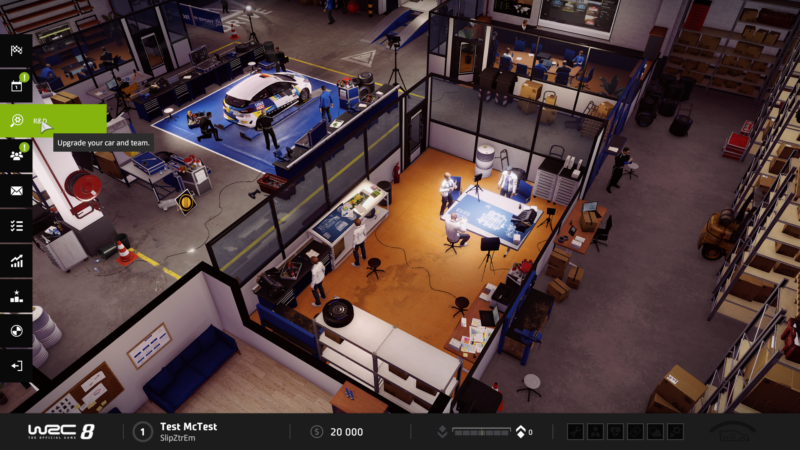 Yes, you’ll be hiring a meteorologist. And a whole bunch of other jobs. The Career Mode in WRC 8 is surprisingly in-depth, like a certain Codemasters title: F1 2019. Here you’ll sign contracts, try to keep manufacturers happy, hire out a crew, and even lead research and development. An overview of your whole outfit is a nice touch, with the camera panning to different sections of the garage as you move from option to option.

In Career Mode, you’ll follow a racing calendar filled with various events. Sure, there are straight-forward rallies, but there’s also extreme scenarios where you have to nurse a damaged car to the finish in a set time, or test to earn brownie points for another manufacturer if you’re thinking of jumping ship. There are also tests with the legendary cars, letting players experience icons like the Lancia Fulvia within the career. Be warned, though, that these are merely short interludes between the WRC action — not to mention a good portion of the legendary cars are pre-order or special edition exclusives.

Your crew gets tired with each event, so you might just elect to skip one and give them the rest they need too. Treat them well and you’ll get unique perks.

The R&D tree will look familiar to players of the afore-mentioned open-wheeler. It’s simpler, however: you earn points doing events, and when you want something, you purchase it. There’s no failure rate percentage or things like that, finding the happy balance between breezy and tedious.

We only wish there were a way to re-run the career walkthrough. There is little explanation for the stats on the team page, making it hard to understand what exactly you’re looking at (outside of the age-old approach of just always aiming for higher numbers).

If all of this sounds a little too complicated for you, no worries: there’s a full Season mode, where you can take part in the rallies without dealing with all the team actions out of the car. You’ll just be missing out!

There are also Quick Play and Split-Screen modes available for players to brush up on their favorites with. 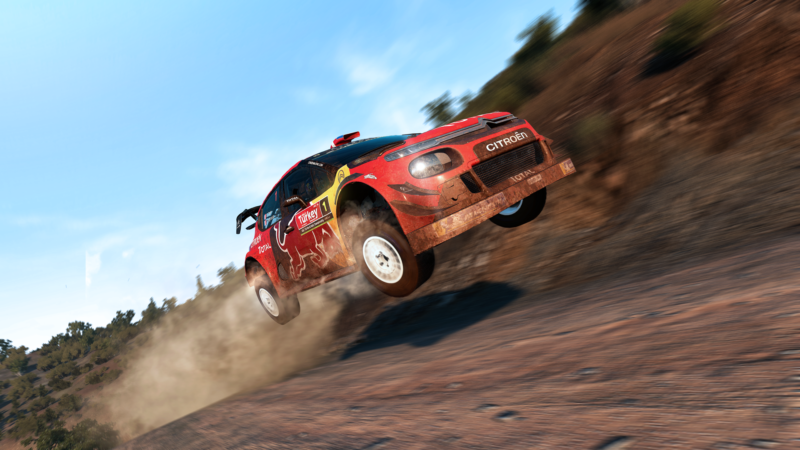 If there’s a weak part of WRC 8, it’s the limited amount of online features that can tempt you away from that engrossing career mode.

There’s nothing bad here: we experienced zero issues with online connections, and it’s all straight-forward. But after the in-depth single-player modes, the multiplayer feels sparse. You can hop into quick events simply enough, with the option to create or join lobbies as well.

There are also leaderboards for every stage — though not divvied up by class. Weekly challenges bolster these, sticking players in specific car/class/track pairings, and the Esports events will add yet more, but it’s all from the same mould. Where are user-created championships? Leagues? Clubs? The career mode has plucked some of the best Codemasters features out of the DiRT and F1 franchises, so it’s a shame that hasn’t happened in the multiplayer. 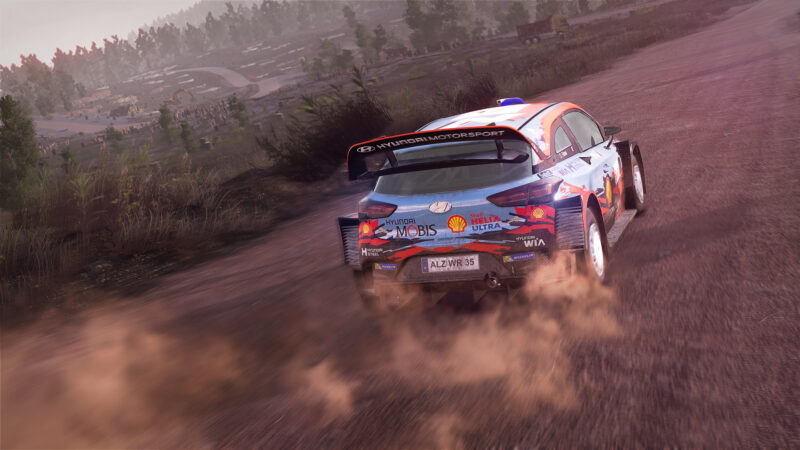 Back to the good stuff then: the driving in WRC 8 is largely a joy. There are distinct character differences not only between the classes, but from different manufacturers as well. A modern WRC machine is a fast, twitchy beast, second only to Group B in terms of pace — and benefitting from over three decades of tech advances. WRC 8 provides a visceral hit of that madness.

Admittedly, like other dedicated rally titles, the learning curve can be steep. If you’re not well-versed in the unique challenge of threading a 380hp hatch through a forest at full tilt, it might take a few DNFs to find the rhythm. There are no rewinds either, though you can turn off damage if you’d like some manner of safety net.

But what makes WRC 8 so satisfying is that it never feels punishing for the sake of it. There’s a consistency to the handling model that breeds confidence: it’s eager on turn-in and dislikes fast, harsh inputs. The exception to this is at very low speeds — a common weak spot in most racing titles — where the cars get vague, and almost give the impression of crab-walking.

On a pad in anything all-paw, you quickly learn to stop over-correcting so much and to trust in the age-old art of steering with the throttle. The front-drive Junior class requires a different approach. Here you can get more aggressive, trail-braking or straight up yanking the handbrake to over-rotate the rear early. The cars take it, and you need them to when you mash the throttle, as the front tries to pull the car wide.

Weather has a large impact on the handling too. Not only because of the importance of the right rubber, but for the aquaplaning as you careen through puddles. WRC 8 handles this mostly well, but there’s a feeling of randomness with the puddles that can prove frustrating. Sometimes, you’ll sail through one without issue. Do the same run, and hitting the puddle will have your car wildly veering to the side. And that’s on full wet tires!

Things get even better for those with a wheel, though. Gone is the seesawing you might get into on a pad thanks to over-correction. The weighting out of the box on the Fanatec CSL Elite is great: it’s light, but consistent with its feedback and linearity. It also feels absolutely natural in the hairpins, slowly building up resistance as you wind on more opposite lock until you find the sweet spot. It all clicks, no doubt thanks to Kylotonn bringing in real racers and the WRC Esports guys to give it that extra bit of polish. 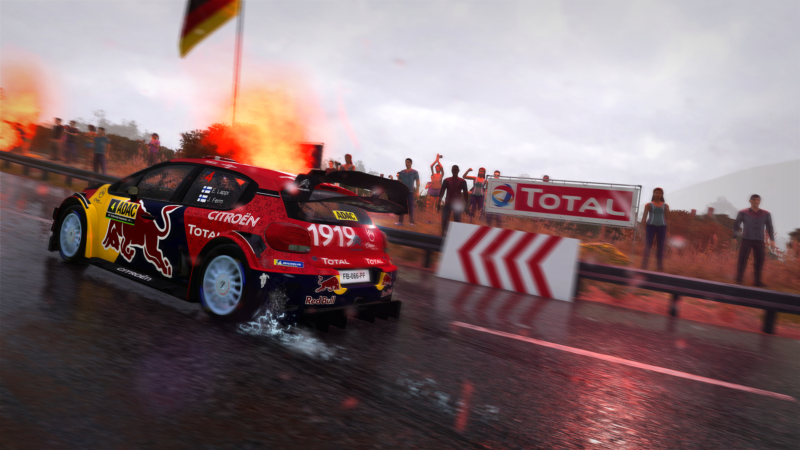 WRC 8 is, overall, a good looking game. It’s not going to challenge the big first-party titles in terms of eye-candy, but arguably, it doesn’t need to: selling consoles is the job of the Forzas and Gran Turismos of the world.

Pardon us for banging the same drum here, but the strongest part of the visual side of WRC 8 is certainly the stage design. Epic vistas abound — if you stop to really take them in — and some of the more dramatic elevation changes really sell the whole package. Stopping may present you with some low-polygon rocks on the road-side, sure: but the sheer saturation of trackside items turns every stage into a real, living part of the world.

The cars also look good, with sharp liveries and powerful headlights slicing through the dark stages. The atmospheric lighting in general is quite well-done. The dynamic weather adds to this, with the sunlight taking on a more desaturated tone when the drops start falling.

If there’s one major drawback with WRC 8, it’s the inconsistent framerate. We couldn’t tell where it sat, with brief glimpses that suggested it could hit 60fps. This was on the One X no less.

The presentation is clean and follows the real WRC site. That’s good for a sense of brand cohesion, but we wouldn’t be opposed to a little more flash to them. The menus can sometimes feel flat. 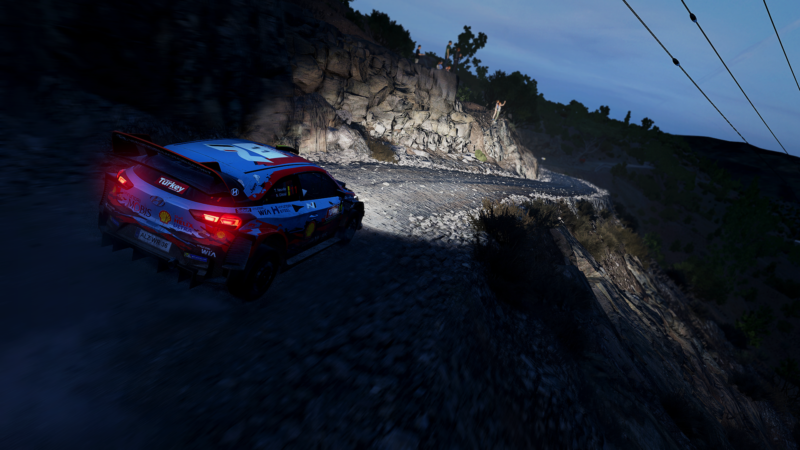 As is the case with every other aspect of the game, the aural experience is a solid step forward from WRC 7. The modern cars have more depth across their rev range, with satisfying pops and crackles on the overrun. Turbos whistle and whoosh satisfyingly. Over all of this is your co-driver: what he lacks in emotion, he makes up for in smooth consistency. And isn’t that more important?

Driving in the cockpit gives you a plenty of audio cues when something goes wrong, too. A damaged wheel will make itself known before you notice it on the HUD, for instance. Keep smacking into trees and the engine will also voice its disapproval by, well, losing its voice. Whoops.

The sounds of the stages are generally quite good, with one exception: the puddles. Somehow these manage to sound like door slamming shut mixed with a cap gun. Rainy stages are like flashbacks to learning starting blocks in high school track and field. 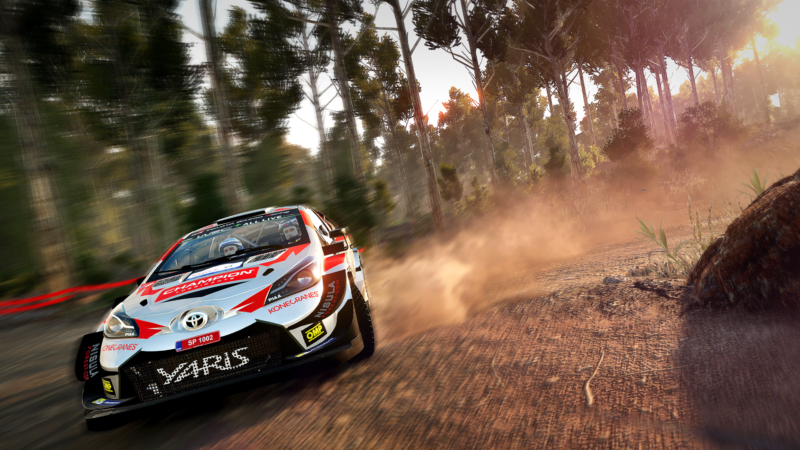 WRC 7 was a line in the sand for Kylotonn. Its first few titles with the license weren’t exactly what we’d call strong, but the 2017 entry showed the French outfit had found its feet.

WRC 8 improves on that in every respect. It’s prettier, better handling, deeper, and — crucially — more fun. From a purely physics perspective it might not dethrone DiRT Rally 2.0, but it runs it closer than you might think. The stage design (and variety) is superb, and the career mode is one of the best in the genre. It also shows signs of expanding with things like the legendary cars and the fun training area. These are important additions, as they cast the net wider in a crowded racing market.

That eponymous focus may be a turn-off for some, but ignore WRC 8 at your own peril: it can stand toe to toe with DR2 in terms of off-circuit racing fun. Sim racers have another strong title to enjoy here, and that’s cause for celebration. 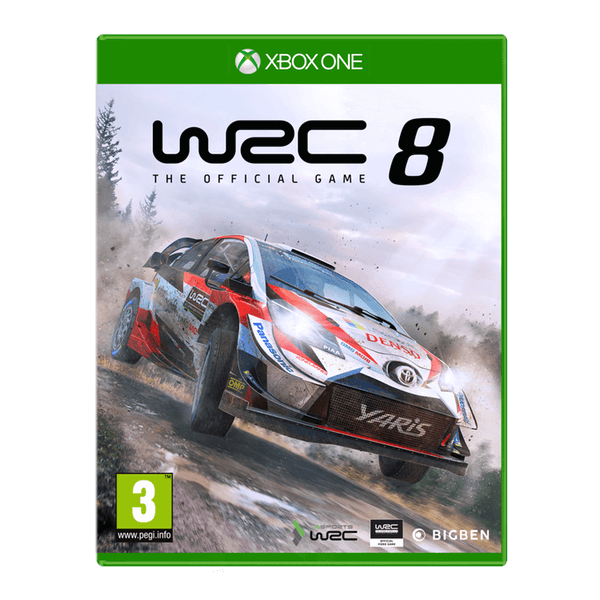 Plenty of stages, the entire 2019 season, and an in-depth career mode only bested by F1 2019. Classic vehicles are thoughtful addition.
Online Features

Par for the course here, with leaderboards, lobbies, and quick-join abilities.
Driving Physics and Handling

An improvement all-round, physics are impressive without being too punishing. Handbrake turns on a wheel are a joy.
Graphics

Stages are lush and weather ups the eye candy. Gets dinged on inconsistent framerate.
Sound Design

Better than before, with a real voice from the cars. Stages have a life to them.