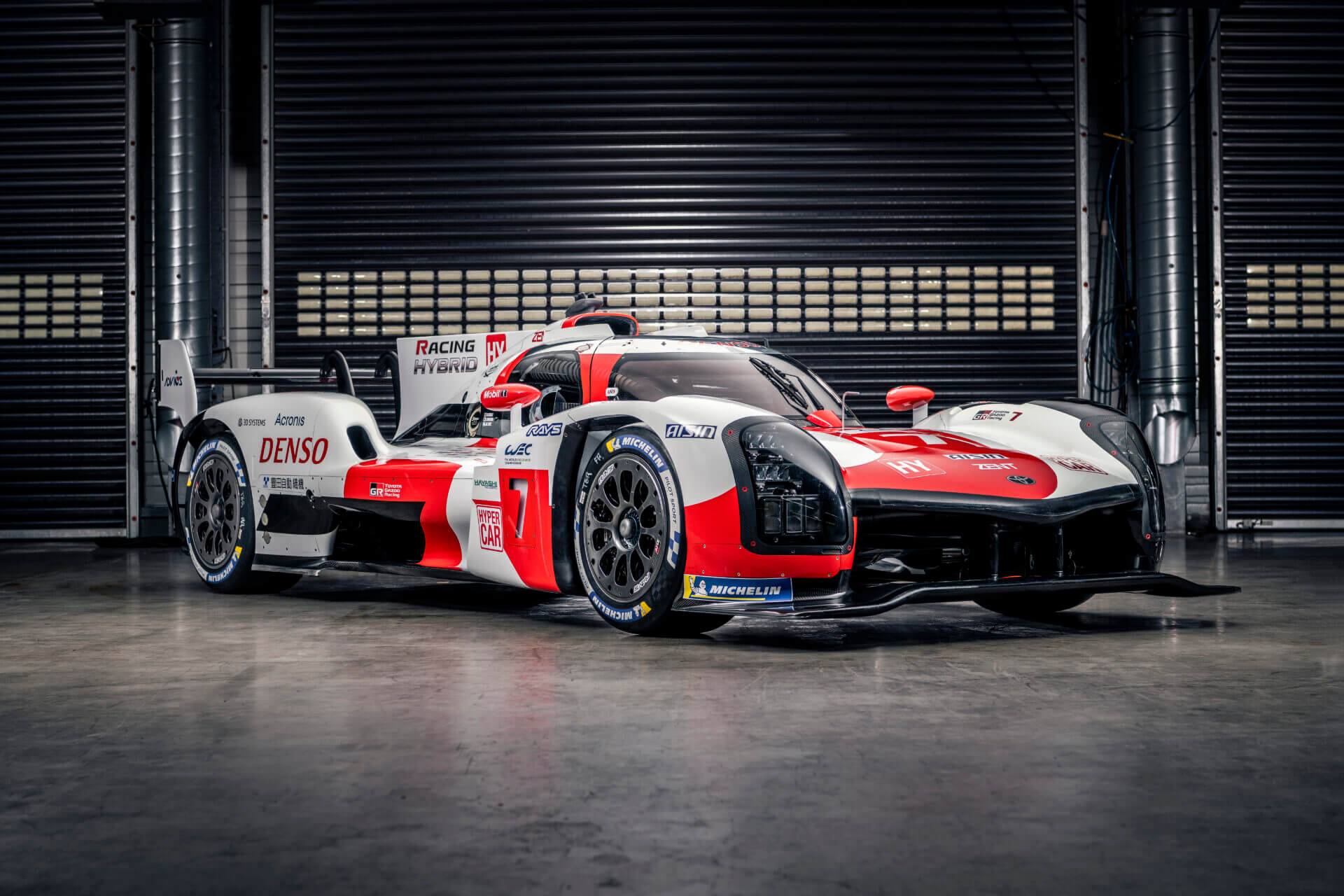 Toyota has become the first brand to reveal its Le Mans Hypercar in full. Sticking with Toyota’s naming scheme for its World Endurance Championship vehicles, but shaking things up a little to reflect the fresh start for the category, the car is called the GR010 Hybrid.

At first glance the GR010 doesn’t seem too far removed from the TS050 that it replaces. Although much larger — coming in at almost ten inches (250mm) longer, and four inches (100mm) taller and wider — the GR010 does adapt some of the previous car’s technologies.

Power comes from two sources, as before. First up is a new and much larger capacity V6 engine, coming in at 3.5 liters and equipped with a pair of turbochargers. That provides 670hp to the rear wheels of the GR010. In addition there’s a front axle motor unit producing 268hp and driving the front wheels.

In competition spec, an LMH car is only allowed to produce a maximum of 670hp, so the GR010 dials back the petrol engine as the motor deploys. This keeps the entire powertrain at as close to that 670hp limit as possible.

Further regulations govern the car’s weight, which is up by 365lb (162kg) compared to its predecessor. As power is also down — Toyota states 32% less power, suggesting 985hp for the TS050 — lap times will be slower than before. Although we won’t find out how much slower until June, Toyota is projecting around a 10s loss per lap around Circuit de la Sarthe.

One other major change comes by way of the vehicle aerodynamics. Whereas in previous seasons we’ve seen manufacturers run low drag configurations for Le Mans or Monza, the LMH class is only permitted one bodywork package. That means each car will run all six races without major changes, and only an adjustable rear wing to
help out.

After an 18-month development period, Toyota has already put the GR010 through its paces in two three-day tests at the Algarve International Circuit (also known as Portimao) in Portugal. It’s even already selected the drivers for the 2021 FIA World Endurance Championship campaign and Le Mans — with the same driver lineup that won both titles last year. That’s Mike Conway, Kamui Kobayashi, and Jose Maria Lopez in the #7 car, and Sebastien Buemi, Kazuki Nakajima, and Brendon Hartley in the #8 car.

In addition to the race car, Toyota is also continuing to develop a road car based around the same formula. It remains to be seen just how similar the GR010 and eventual production GR Super Sport will be however. The prototype that delivered the Le Mans 24 trophy last year was essentially a rebodied TS050.

While Toyota is the first brand to reveal its car, we’re expecting a flurry of other vehicles to appear over the next few weeks, ahead of the season start in Sebring on March 19. That includes the SCG007, which is well on the way, and a mystery vehicle from ByKolles Racing.

“During our LMP1 era, since 2012, we worked tirelessly to improve and strengthen our hybrid technology for racing. We set new standards with the TS050 HYBRID and our first loop of racing hybrid development is complete; this technology will be available to our future customers soon.

“Now the second stage will begin. Through our WEC participation, we will refine our racing hybrid powertrain in the GR010 hybrid, enhance our understanding of hypercar technology and continually develop our staff. We do this with one clear goal: to deliver more exciting sportscars to our customers in the future.

“The GR010 hybrid is a preview of our road-going cars and what we learn on the WEC race tracks will directly benefit our customers. For this reason, we are delighted to welcome new competitors to the top category of WEC; a tough fight on the track will inspire us to continuously improve and push the limits for better.”

Andrew Evans · Jan 14, 2021· Comments
The most famous 24-hour race in the world is back, for its 90th running, just 10 months on from its last event as it returns to its normal spot on the calendar.

Andrew Evans · Jan 14, 2021· Comments
Gran Turismo series partner Toyota has revealed a special, limited edition version of its Toyota Yaris hatchback, which not only bears the Gran Turismo 7 name but comes with a free copy of the game and a PlayStation 5 console.

Andrew Evans · Jan 14, 2021· Comments
After it surprisingly revealed a new car at the Consumer Electronics Show (CES) in 2020, Sony has taken the covers off a second model at this year’s show — and it looks like it might be planning to build them.

Andrew Evans · Jan 14, 2021· Comments
Porsche has officially taken the covers off its Vision Gran Turismo car, designed specifically for Gran Turismo 7 when it launches on March 4.

Andrew Evans · Jan 14, 2021· Comments
MG’s specialist design center, SAIC Design in London, has created a new concept car that’s not only inspired by gaming, but a games room itself.

Andrew Evans · Jan 14, 2021· 1 Comment
Only 11 months have passed since the last 24 Hours of Le Mans but, thanks to yet more calendar disruption, the world’s most famous 24-hour race is back — and there’s some major changes.

Michael Leary · Jan 14, 2021· 13 Comments
Although Lamborghini has now officially pulled the wraps off its latest nostalgia project, the Countach LPI 800-4, you’re already too late to buy one.