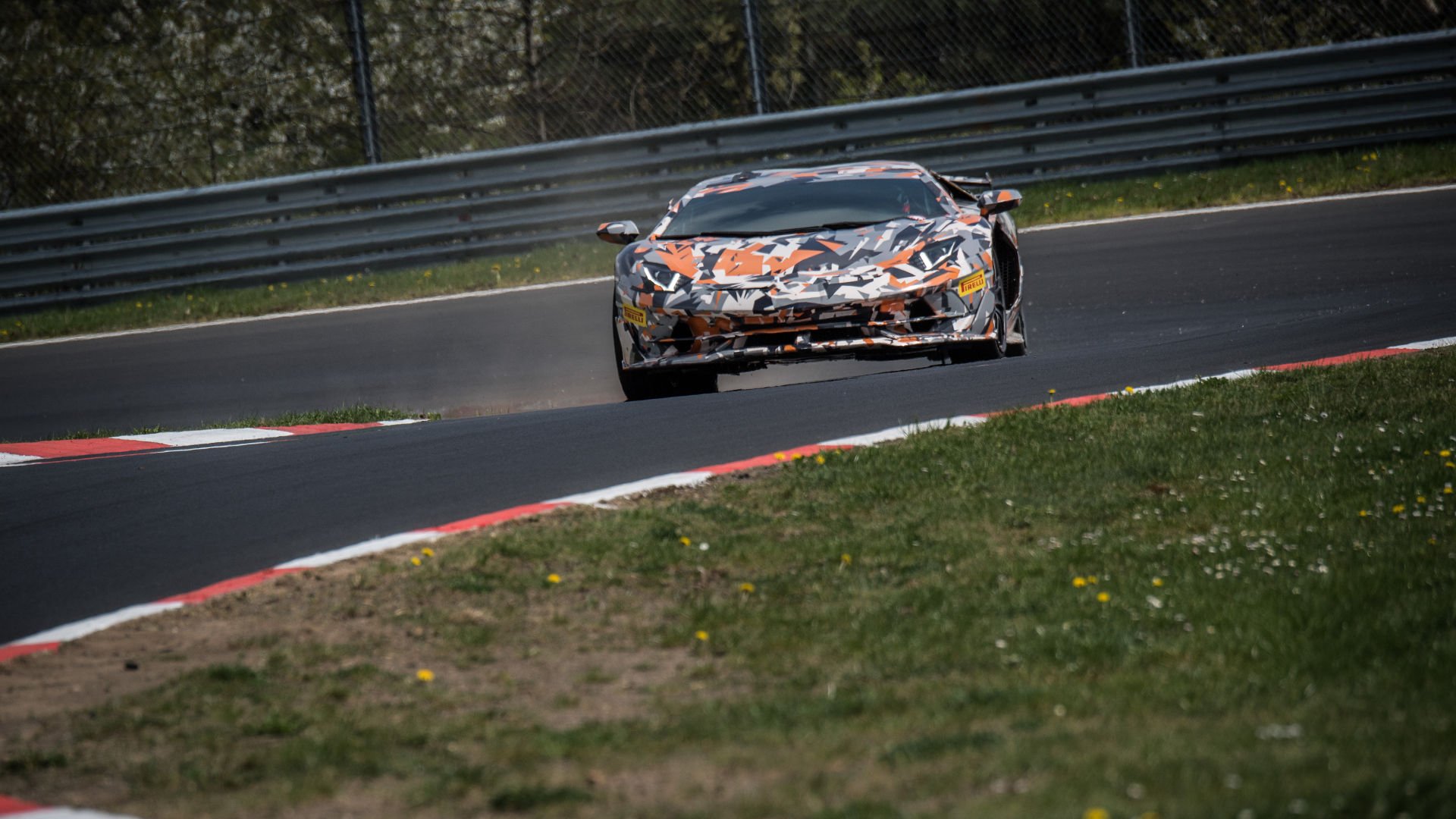 Lamborghini has another ring-meister in its paddock, in the shape of the new Aventador SVJ.

The team at Sant’Agata hasn’t even unveiled the car officially yet — which explains its rather dazzling camouflage. Nonetheless, the SVJ has already one-upped its predecessor, the LP750-4 SV, with a rather remarkable lap time around the Nordschleife.

Compared to the LP750-4 SV, the SVJ is both more powerful and lighter. Lamborghini’s being a bit tight-lipped about how much in either direction right now, but it does say the SVJ comes in at 1.98kg/hp. Assuming the company means “PS” when it says “hp” (as seems to be the norm now), that’s about 4.43lb/hp. This would roughly equal a gain of 20hp on a car around 100lb lighter, or 760hp (770PS) with a dry weight of 3,360lb. 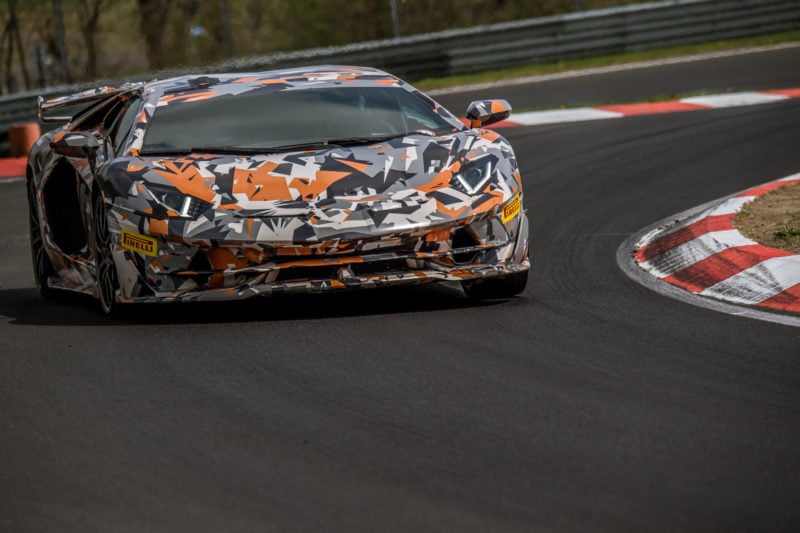 Like the SV, Lamborghini has achieved its weight loss with more extensive use of lightweight materials. But it’s not just about slimming down; the SVJ has some serious work under the hood too.

Lamborghini has reworked the four-wheel drive system and rear-wheel steering for the SVJ. It combines this with model-specific tweaks to the “ALA” (Aerodinamica Lamborghini Attiva) active aerodynamics system. This employs an aero vectoring system to generate the downforce needed for a fast lap time without significant harm to the top speed or emissions. 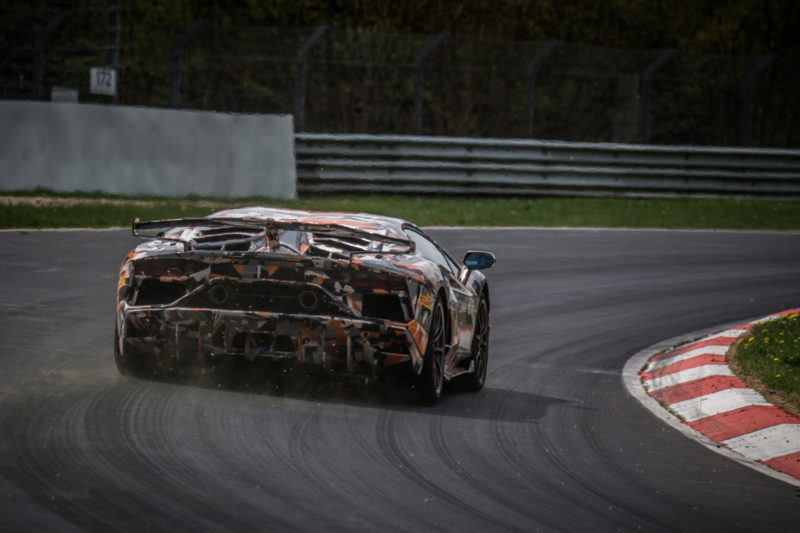 During simulation runs for the ALA system, the SVJ managed to beat its fastest sibling, the Huracan Performante. With a lap time of 6:52.01, the Huracan was well over seven seconds quicker than the old SV, and so naturally Lamborghini took the SVJ to the ‘Ring to find out.

Official Lamborghini driver Marco Mapelli took on driving duties. Remak S.r.l. fitted the car with VBOX technology for timing, GPS certification and filming purposes for the run, to head off any video-tampering claims as with the Huracan.

The net result of all of this? A lap time of 6:44.97 — seven seconds faster than the Huracan Performante and 15 ahead of the previous Aventador record. More importantly, it’s 2.3 seconds ahead of Porsche’s 911 GT2 RS, which had laid down the previous claim to the production car lap record.

“The Aventador SVJ takes the Jota suffix, following the Lamborghini tradition for denoting a car’s track-focused talent. This new car is the convergence of Lamborghini technologies to produce a super sports car that transcends current performance benchmarks.

“Its tenure as the Nürburgring lap time record holder, even before its unveiling during the Monterey Car Week in California in August, endorses Lamborghini’s competence in applying superlative design engineering and ground-breaking technologies. The SVJ is a super sports car at the zenith of performance, while also ensuring unrivaled driving pleasure.”

You can watch Mapelli’s lap, onboard and in full, below:

Andrew Evans · Jul 26, 2018· Comments
Gran Turismo series partner Toyota has revealed a special, limited edition version of its Toyota Yaris hatchback, which not only bears the Gran Turismo 7 name but comes with a free copy of the game and a PlayStation 5 console.

Andrew Evans · Jul 26, 2018· Comments
After it surprisingly revealed a new car at the Consumer Electronics Show (CES) in 2020, Sony has taken the covers off a second model at this year’s show — and it looks like it might be planning to build them.

Andrew Evans · Jul 26, 2018· Comments
Porsche has officially taken the covers off its Vision Gran Turismo car, designed specifically for Gran Turismo 7 when it launches on March 4.

Andrew Evans · Jul 26, 2018· Comments
MG’s specialist design center, SAIC Design in London, has created a new concept car that’s not only inspired by gaming, but a games room itself.

Michael Leary · Jul 26, 2018· 13 Comments
Although Lamborghini has now officially pulled the wraps off its latest nostalgia project, the Countach LPI 800-4, you’re already too late to buy one.

Andrew Evans · Jul 26, 2018· 21 Comments
Genesis has unveiled a trio of new racing car concepts designed in collaboration with Gran Turismo, destined to take their places in the racing game series in the near future.

Andrew Evans · Jul 26, 2018· Comments
Nissan has taken the covers off the latest model of its flagship performance car, the GT-R Nismo, ahead of its market launch later this year.