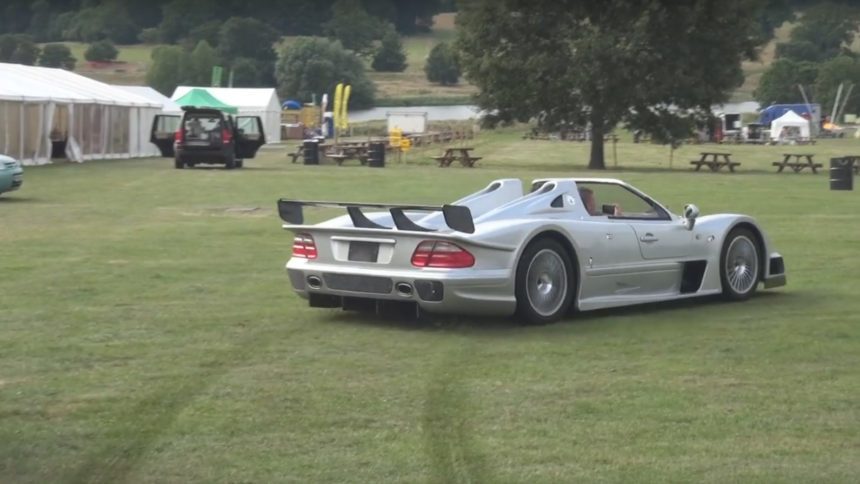 It’s rare that you get access to a one-of-six, million dollar supercar, so you have to make the most of it, right?

That’s clearly what these two lads thought, when they took this ultra-rare Mercedes CLK-GTR Roadster out for a spin.

The car, the third of six ever made, was on display at Heveningham Hall in Suffolk, UK. You may recognise it as the home of famed supercar torturers Tax The Rich, but this time it was the venue for a second annual Concours d’Elegance.

With a 604hp, 6.9-liter V12, the race-derived CLK was a homologation special; Mercedes had to deliver 25 road cars in order for the vehicle to qualify for FIA GT1. In fact it went one better and produced 26, with AMG creating 20 coupes and HWA building the 6 convertibles.

Despite the very pedestrian, 1990s interior, the CLK is very much a road car in name only. It’s not something you could use every day, as it isn’t even high enough to clear a speed hump. That doesn’t deter these chaps though, as they leather the GTR across Heveningham’s fields – at one point nearly grounding it.

You can watch the car in action below, but we wish they’d have let the engine warm up a bit first.

Mercedes-Benz
59 Comments Discuss this post in our forums...
Can You Beat the Impossible Gran Turismo Quiz?