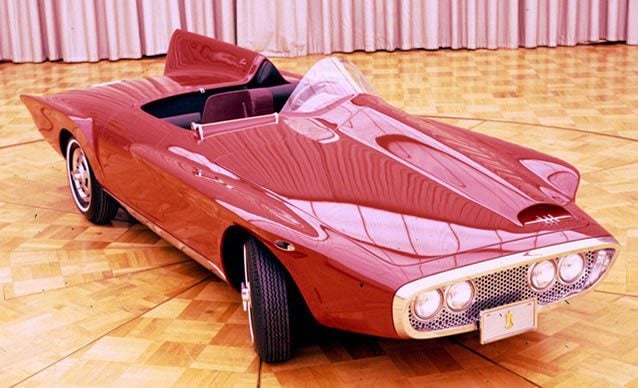 At the 2011 Pebble Beach Concours d’Elegance yesterday, Kazunori Yamauchi awarded this year’s Gran Turismo Trophy to a head-turning 1960 Plymouth XNR Ghia Roadster concept car. Created by influential car designer Virgil Exner (hence the concept’s name), it was intended to preview the direction of Chrysler’s designs in the 1960’s. It had enough muscle to back up its dramatic, asymmetrical look, producing 250 horsepower from a Valiant 225 Slant Six (more details on the car are available here).

Kazunori has commented on his selection via Twitter, confirming that it won’t be coming to GT5 via DLC, but will instead be featured in the “next Gran Turismo“, presumably GT6 (thanks to Shirakawa Akira for the translation).

Thanks to all of you who sent this in! Head over to Motor Authority for more photos.

Andrew Evans · Aug 22, 2011· Comments
GTPlanet had the opportunity to sit down with Gran Turismo series creator Kazunori Yamauchi as part of a round-table interview during the recent GT World Series Finals in Monaco.

Andrew Evans · Aug 22, 2011· Comments
One of the bigger stories surrounding Gran Turismo in 2022 is production finally beginning on the long-awaited movie of the same name.

Andrew Evans · Aug 22, 2011· Comments
As the curtain drops on another exciting season of the Gran Turismo World Series, Polyphony Digital is already looking forward to a bigger and better 2023.

Jordan Greer · Aug 22, 2011· Comments
Ferrari has finally unveiled its highly anticipated Vision GT project car during the Gran Turismo World Finals here in Monaco. As you might expect from the famous Italian company, it’s quite a looker!