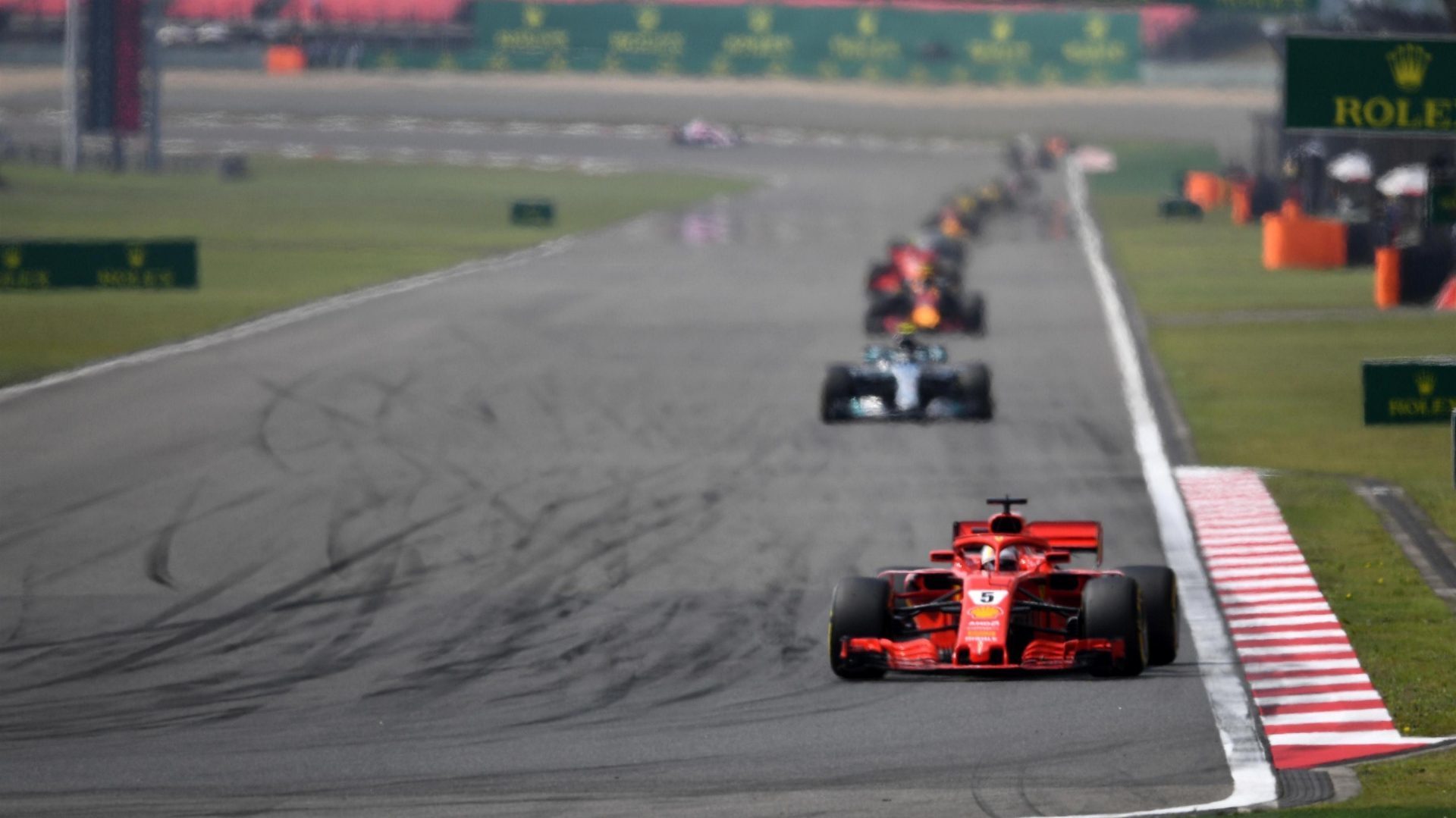 Heading into today’s Formula One race, we’d forgive fans for assuming the final finishing order. The first half of the race even played into these expectations — but the second half was utter chaos.

The Chinese Grand Prix is often one of the more formulaic races of the season. The dominant 1–2 of Ferrari in qualifying yesterday suggested this would continue unabated. But today’s race broke the mold, and is without question the best of the season thus far. It was neither a Prancing Horse nor a Silver Arrow on the top step when the dust settled; instead, Red Bull’s Daniel Ricciardo stole top honors.

Sebastian Vettel led from pole for Ferrari at the beginning of the race. With a sharp move he closed the door on teammate Kimi Raikkonen heading into Turn 1, a move leaving Raikkonen vulnerable to the oncoming Mercedes of Valtteri Bottas.

With Vettel leading the pack by more than three seconds, strategy came into play. Mercedes was the first to react, pulling Bottas into the pits on lap 19. Ferrari made the call the following lap, but Bottas was able to undercut Vettel as he exited pit lane. Bottas kept Vettel at bay for the next handful of laps, quickly gaining on Raikkonen up ahead. 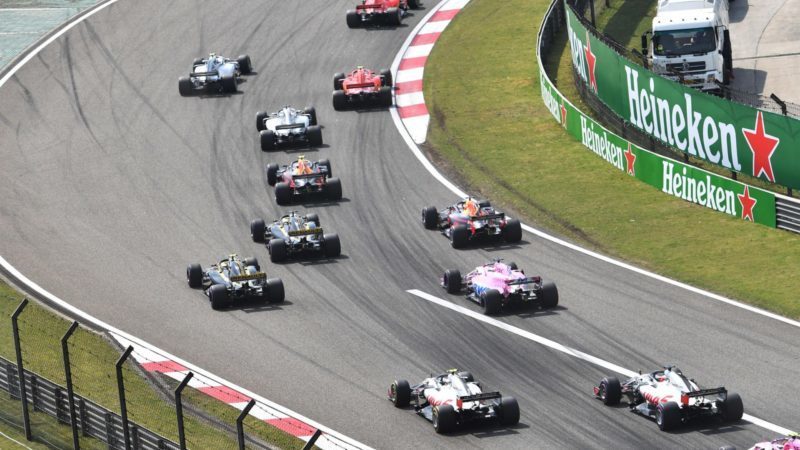 Kimi was on a different strategy, serving to pinch the Mercedes, allowing Vettel to draw closer. The Iceman kept his fellow Finn behind into the penultimate hairpin of Turn 14. With worn tires, Raikkonen was unable to do anything as the Mercedes charged around the outside of Turn 1 for the overtake.

Vettel would also overtake his teammate and looked to do away with Bottas through Turn 6, but to no avail. The Mercedes driver put enough distance between them, nullifying DRS. Just as Bottas looked to have the race in the bag, the race took an unexpected turn.

On lap 30, Pierre Gasly collided with Toro Rosso teammate Brendan Hartley. Given the go-ahead to pass by the team, Gasly misjudged a move from his teammate, spinning both cars into Turn 14. As a result of the collision, debris littered the track prompting the safety car. 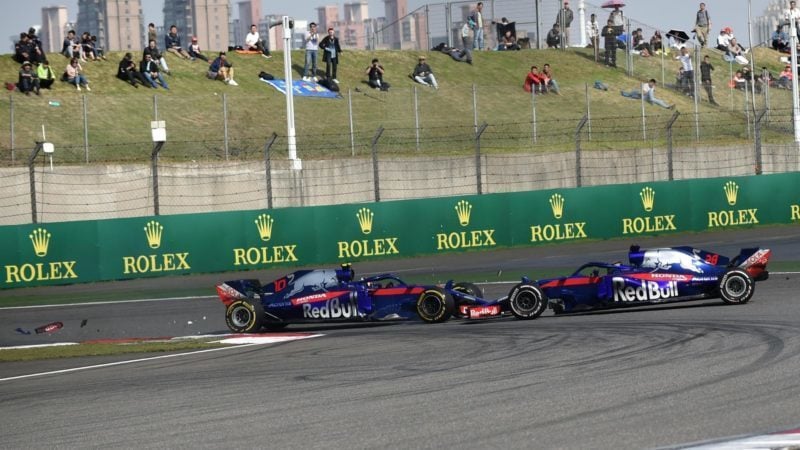 With a golden opportunity, Red Bull was quick to react. Max Verstappen and Daniel Ricciardo, running third and fifth, came into the pits and fitted with soft tires. Rejoining the race in fourth and sixth, the Red Bull duo were now the fastest cars on track.

Ricciardo made short work of Raikkonen’s Ferrari in fifth. On medium tires, the Ferrari was unable to fend off the charging Bull. Before long, he had his teammate and Lewis Hamilton in his sights. He passed his teammate through Turn 7 following an incident, and collected Hamilton soon after.

2.8s away from Bottas in the lead, the Aussie driver cut the gap down in convincing fashion, breezing past Vettel in the process. With 12 laps remaining, the final stretch of the race came alive. Ricciardo went for a daring overtake heading into Turn 4, forcing Bottas to give up the position.

As of today, Ricciardo brings Red Bull its first Chinese GP victory since its 2009 debut. Better still, this is the first time the team has won one of the first three races since 2013. It’s not a bad way for the Aussie to celebrate his sixth Grand Prix victory. Starting from second, Raikkonen settled for third in today’s race. The Finn stole the position following an incident between Verstappen and Vettel. 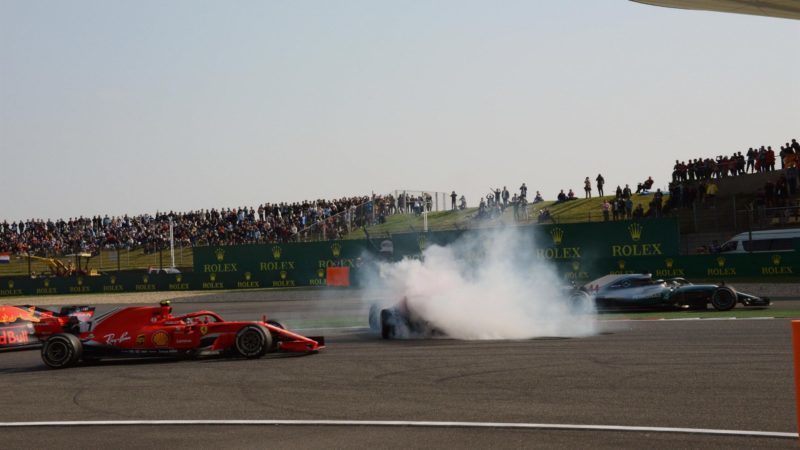 Verstappen was in a prime position to make the most of the turn of events, but impatience was his undoing. Heading into Turn 7 on lap 39, he had a go at Hamilton but ran off track; an unrealistic attempt against the defensive Briton.

The bad luck continued on lap 43 where he and Vettel butted heads. Max dove for the overtake through Turn 14’s hairpin, but the two collided — almost a carbon copy of the Toro Rosso incident. Both drivers were able to rejoin the race but the Belgian picked up a 10-second penalty. At the end of the day, Verstappen crossed the line in fourth after recovering but drops to fifth.

Vettel fell down the grid order into eighth following the contact. Struggling, the Ferrari fell victim to Nico Hulkenberg’s Renault and the McLaren of Fernando Alonso. Alonso and Vettel had a heated exchange through Turns 1 and 2, with Alonso forcing the Ferrari to run wide. 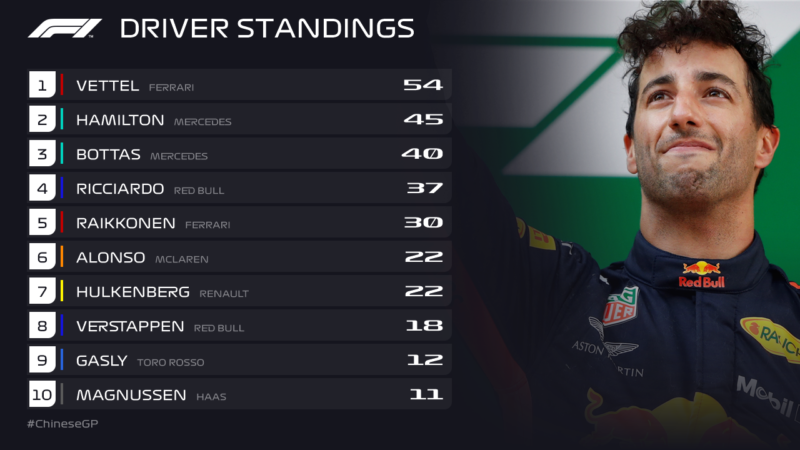 Carlos Sainz and Kevin Magnussen round out the top 10 for Renault and Haas, respectively. As a result of the crazy second half of the race, the driver standings have shifted a bit. Vettel’s championship lead narrows down to 9 points over Hamilton, 54 to 45. Bottas trails his teammate by five points, and Daniel Ricciardo jumps to fourth with 37.

In the constructors’ standings Mercedes takes the lead with a single point, 85 to 84, and Red Bull moves into third with 55. In two weeks time the circus heads to Baku for the Azerbaijan Grand Prix. If last year’s controversial race is anything to go by, 2018 is just heating up. 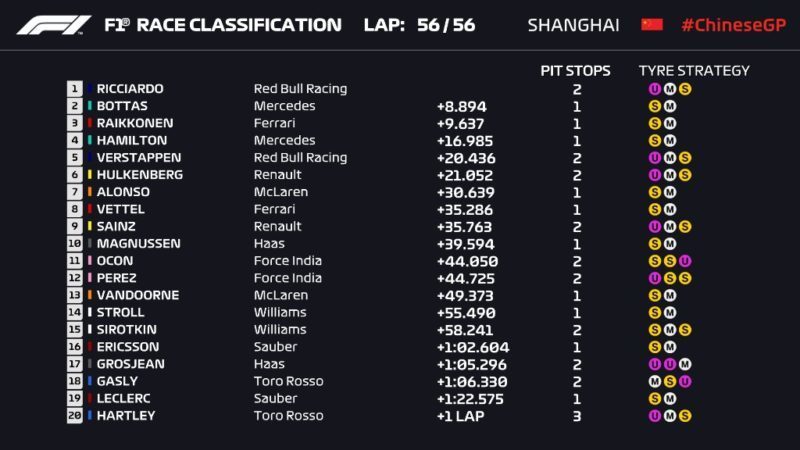