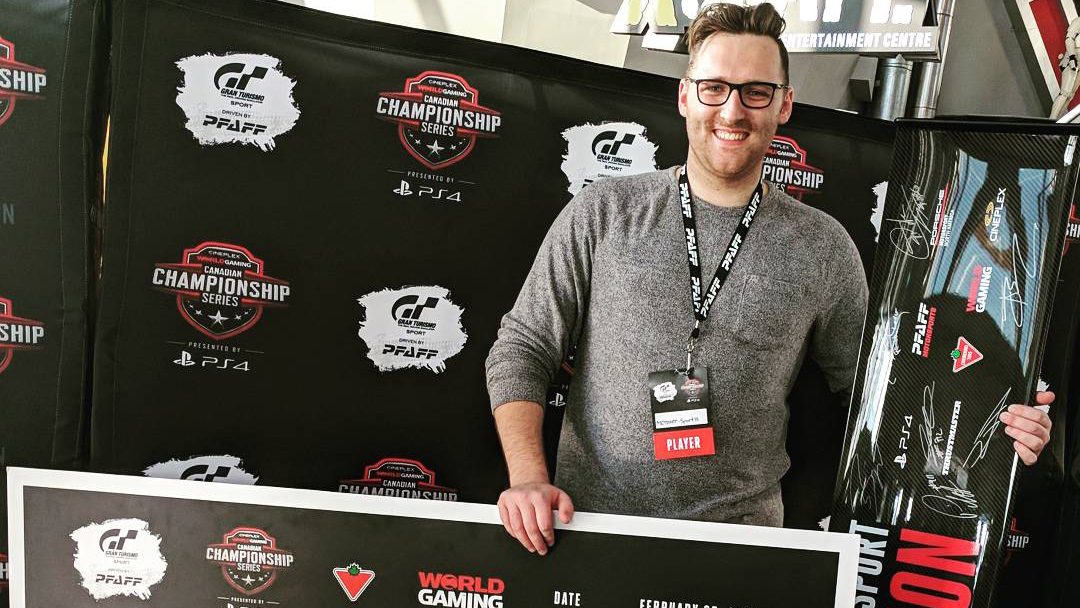 After a dominant early performance and an exciting final race at the Nordschleife, Barrie’s Andrew Waring (Monster-Sport71) walked away from the first WorldGaming Canadian GT Sport Championship $8000 richer.

It was the culmination of nearly two months of competition in the first major live GT Sport event of 2018. Kicking off at the beginning of the year, the series brought in players from across the country to determine the fastest in Polyphony’s latest racer. Waring not only bags the cash, but the carbon fiber wing off a real-world 911 RSR courtesy of Pfaff Automotive and an all-expenses-paid trip to the Long Beach Grand Prix in April.

Competition was fierce, and I say this from experience: I tried my hand in the first round, and just barely made it into the top 40, only to be eliminated in the next round. That cut determined the fastest 16 — many of whom are GTPlanet members — and they all descended upon Cineplex’s Colossus Theatre in Vaughan, just outside of Toronto this last Sunday.

Going into the event, it could’ve been anybody’s game. Waring qualified strong in the prelims, but not first in his heat. But true to his username, he monstered the competition in Heat 1, pulling out a sizeable lead at both the Nürburgring GP and Dragon Trail races.

With clear air between him and the rest of the pack during the first round, Monster locked in his position alongside the other seven drivers for the final races:

Bigauskas (hotsaucer) would go on to qualify on pole at Lago Maggiore GP II for the penultimate race, followed by Waring and Alipacha (Djow-Al). That lead would be short-lived however, as opening corner carnage pushed him off-track and all the way to the back of the pack. By the end of the first lap, he would make his way up to fifth.

Up front, Waring had his hands full fending off Thorogood (TheRaceboy77). Meanwhile, Bigauskas had worked his way up to Thorogood’s bumper by the start of the last lap. An over-eager punt may have nabbed him second at Lago Maggiore, but the race stewards hit him with a single-point reduction because of it. This meant that even if he were to overtake Waring at the daunting Nordschleife, Monster-Sport71 would need to fall back to third (or worse) for hotsaucer to nab the overall win.

While the final race would be the longest of the day (three laps at the Nordshcleife), nobody seemed to tell the drivers. From the off it was an all-out sprint, with Waring and Bigauskas running nose-to-tail the majority of the race. They would swap spots multiple times, even going two-wide throughout the track.

Carrier (Nic-KL) jumped up from a disappointing Maggiore showing to overhaul Thorogood for third mid-race. It couldn’t last however, and with an unexpected off before the final straight, Bigauskas dropped down to second, and the second race podium mirrored that of the first.

Four races, four wins: it was a clean sweep for Andrew Waring. Bigauskas took home $4,000 and a 911 RSR hood, while ForzaRC veteran Thorogood pocketed $2,000 and a hood as well. The 25-year old Albertan was one of the bigger surprises of the event. A ForzaRC veteran, we caught up with him post-race to find out how he adapted:

“It was totally different. Learning the wheel, learning a new physics engine, learning everything, it was completely different. Most people play both, but it’s not the same, right? So I just tried to put in as much time as I could, adapted as best I could. I came here, and I know I have a lot of live experience with Forza stuff, knowing that I was probably one of the most experienced ones at live events. So I was hoping I could pull something out — I didn’t think I would make it even to the top eight, I was just happy to be here, and it ended up working out alright!”

You can catch the whole day’s action over on WorldGaming’s Twitch archive. To skip straight to the action, hit the 03:46:30 mark for Lago Maggiore, and 04:17:50 for the Nordschleife. Congrats to all of the winners!

A huge thanks to the folks at Cineplex, WorldGaming, Pfaff, and all the rest involved in putting on the event!