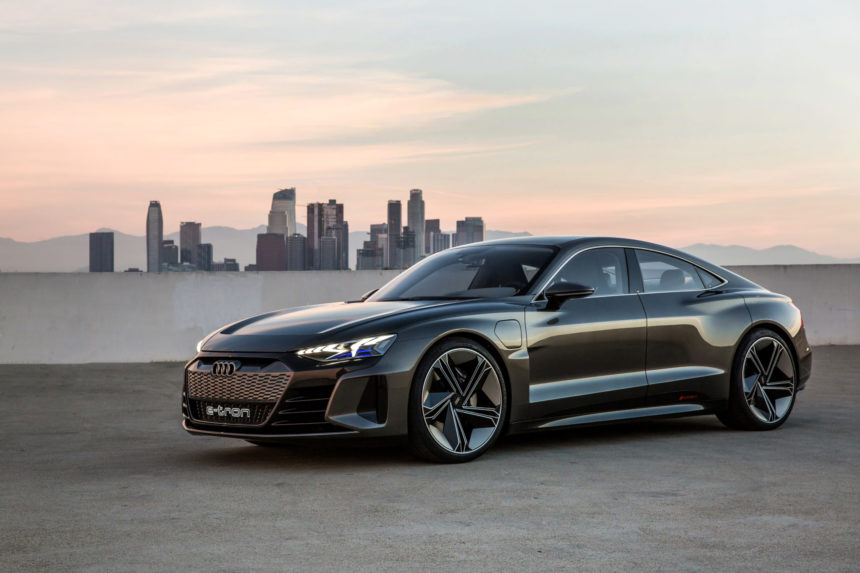 After a short spell of teasing us, Audi has revealed its new all-electric GT car at the LA Auto Show.

Rather imaginatively, Audi’s called it the e-tron GT, and it’ll join the e-tron SUV and e-tron Sportback in the all-electric range from 2020. Audi has developed the e-tron from the same platform as sister brand Porsche’s Taycan four-door, but insists the two cars are otherwise unrelated. 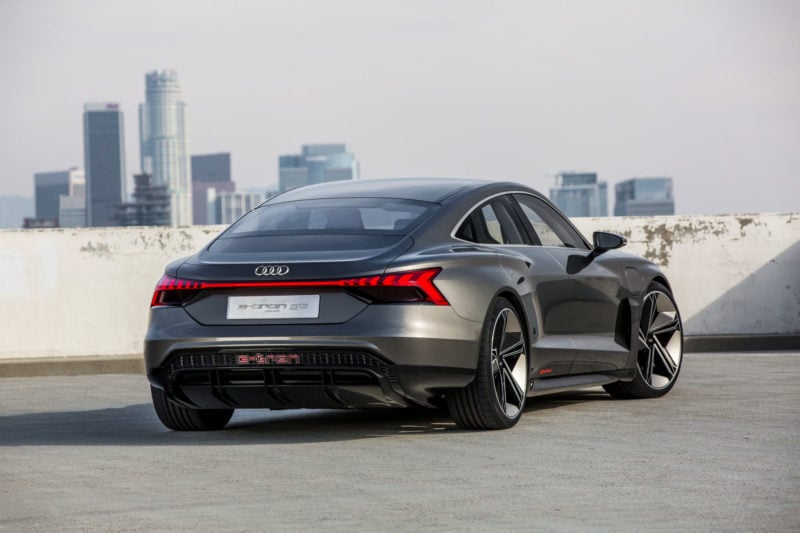 One thing’s for sure though: the e-tron GT is not a small car. Coming in at over 16 feet long, the GT is nearly six and a half feet wide. However, it sits pretty low to the ground, at just four and a half feet to the highest point — Audi says it has a low center of gravity comparable to the R8 supercar.

Although many of the structural elements of the car use high-strength steel, there’s a number of weight-saving measures in the construction. This includes extensive use of aluminum and a carbon-fiber roof section. Audi hasn’t revealed a precise weight for the car just yet though.

More than 60% of the car’s length is wheelbase, giving decent room in the cabin for four occupants. The absence of bulky powertrain units also gives plenty of load space, with 450 liters of luggage capacity in the back and an extra 100 liters in the nose. 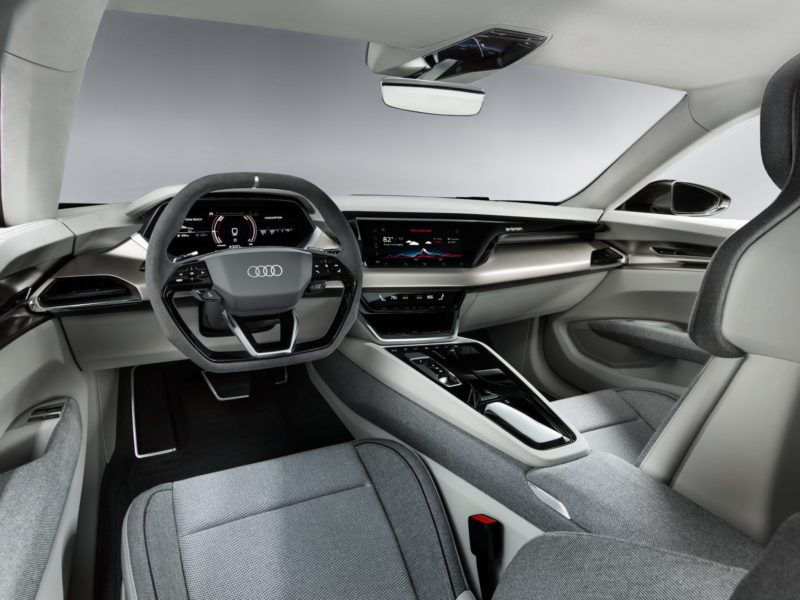 Power for the e-tron comes from a 96kWh lithium-ion battery pack, although this may increase nearer the production date. This sits flat under the floor, taking up every inch of the space between the axles. Charging can take the conventional cable form or by induction with an Audi Wireless Charging pad. There’s also 800V fast-charging system, providing 80% charge in just 20 minutes where available.

The battery pack powers a pair of motors, one on each axle, good for a total of 434kW, or 582hp. That translates to a 0-60mph time of around 3.3s, with a top speed limited to 149.1mph in order to keep the range sensible. In current guise, that stands at almost 250 miles under the WLTP efficiency standards. A novel battery cooling system means that drivers can use the car’s maximum performance repeatedly, suggesting other rival brands (we wonder who) can’t match this. 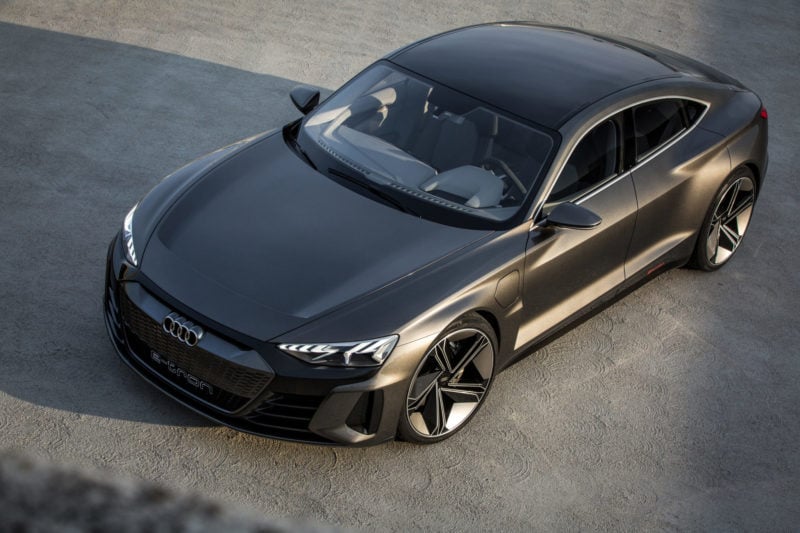 With no physical link between the front and rear motors, the e-tron GT is able to switch between front, rear and four-wheel drive as required. The car’s motor control systems can also divert torque laterally across either axle. There’s also all-wheel steering.

Although fitted with ceramic brake discs, chances are you’ll rarely use them. The e-tron GT recovers energy through braking the motor system for decelerations up to 0.3g, only needing the physical brakes above that. Audi claims this covers 90% of all braking situations, so the car will recharge in most normal decelerations. 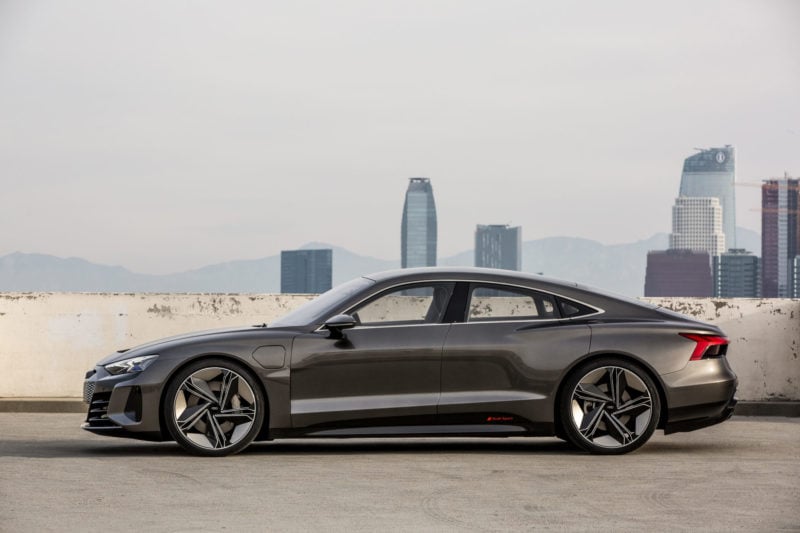 For the concept car at least, the interior takes a driver-focused layout. There’s a virtual cockpit ahead of the driver and a large touchscreen, angled towards them, on top of the center console. There’s sport seats for all four occupants, suggesting the car has quite some cornering performance too.

Unusually, Audi is touting the e-tron GT’s vegan credentials. The leather in the cabin is in fact synthetic, and many of the materials are recycled. That extends to the microfiber headlining and the deep-pile floor carpet which, of all things, is made from used fishing nets…

Production of the e-tron starts in 2020, with customer deliveries in early 2021, but you’ll get a chance to see it in action well before that. The e-tron GT has a role in the currently untitled fourth Marvel Avengers film, due in summer 2019. Presumably Ingolstadt survived the Snappening…

LA Auto Show 2018
93 Comments Discuss this post in our forums...
Test Your Badge Knowledge With Our Car Logo Quiz