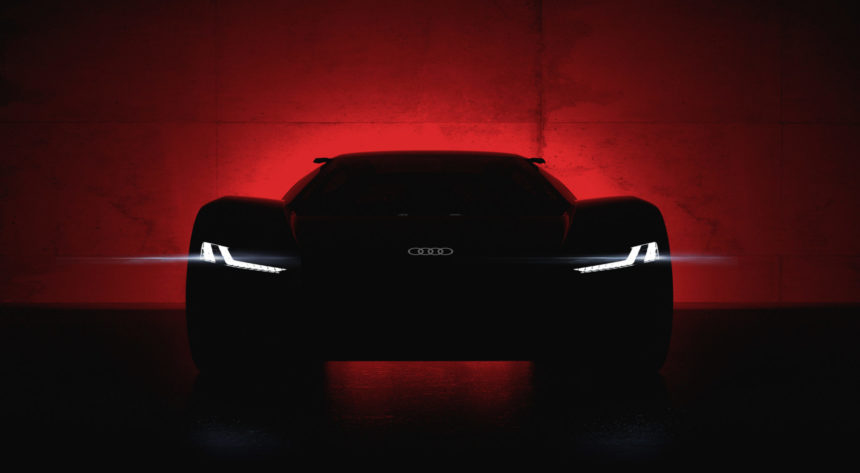 Fresh from revealing its electric GT car, the e-tron Vision GT, in June, Audi is continuing the theme.

It’s heading to the Monterey Car Week with an all-new, and electric, supercar concept. We’ve only got a teaser image for now, as Audi is going to take the covers off on August 23.

Audi calls this car the “PB18 e-tron”. It’s named for the date and location of its debut — 2018 Pebble Beach — but also the Le Mans-winning R18 e-tron race car. That’s also a clue to some of the technologies underneath, although unlike the R18, PB18 is all-electric. In Audi’s own words, it’s pursuing “emotion instead of emissions”.

Although details are scarce at the moment, the teaser does give away a few details over the styling. The front-end shot shows a car not hugely dissimilar to the second generation R8, and Audi has produced electric e-tron models of the R8 in the past. We’d expect something in the R8s mold when the covers come off, although the task of styling the PB18 fell to Audi’s new Malibu Design Loft. Not too similar though; Audi says the car is a “design study for a puristic sports car of the future”.

As Audi pitches the PB18 as a supercar, there’s likely to be plenty of exotic materials in the car’s construction. The R8 uses a carbon-fiber cell, designed for GT3 races, and it’s reasonable to assume PB18 will employ a similar construction. Power is also under wraps for now, but it’ll have to retain a similar power-to-weight ratio to meet the supercar brief.

The unveiling will take place at 1700 on August 23, on the racetrack at Laguna Seca. It’ll follow this up with an appearance at “The Quail” the next day, from 0800 to 1600, before returning to the track all day on August 25. There’ll be one last appearance during the Concours d’Elegance on August 26.

Pebble Beach Concours d'Elegance
44 Comments Discuss this post in our forums...
Test Your Badge Knowledge With Our Car Logo Quiz