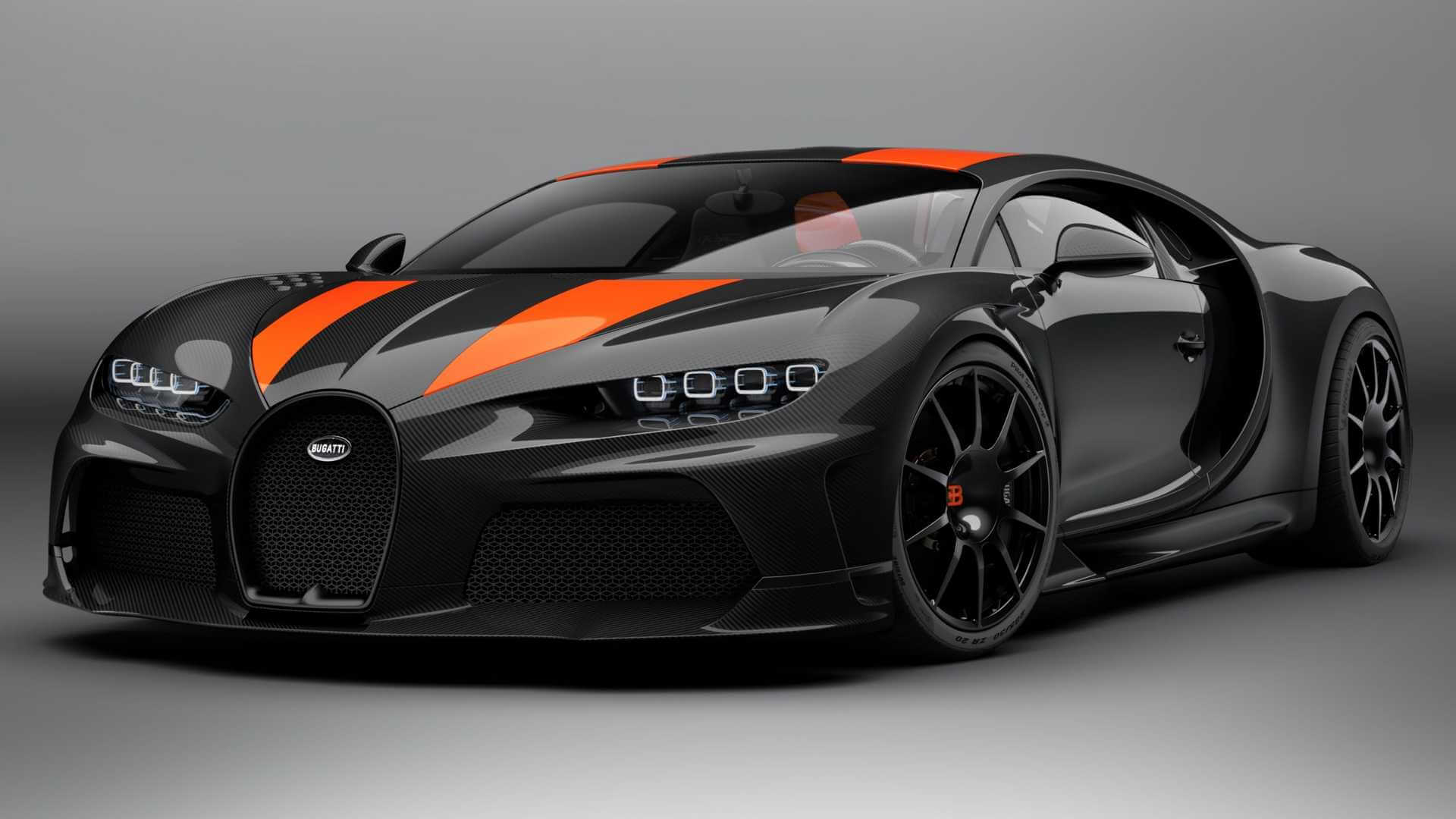 We all like to mark big achievements, and car manufacturers are no different. Bugatti is already making a celebratory model for its 110th anniversary, in the shape of the Chiron Sport 110 Ans and Centodieci versions, but it has something else to shout about this year too.

The brand has laid claim to building the fastest production road car in the world. Yes, again. There’s a few minor caveats to the claim — it didn’t meet the minutiae of the record requirements (for good reasons) and it’s not really a production car — but to become the first manufacturer to build what’s essentially a regular road car, with a warranty, that can do 300mph is still a pretty big deal.

It’s such a big deal that Bugatti is making 30 cars to mark the occasion. The Chiron Super Sport 300+ follows in the footsteps of Bugatti’s old record-breaking car. When some American upstarts beat the Veyron — the first 250mph production road car — Bugatti made a more powerful, faster version called “Super Sport” to take the record back. 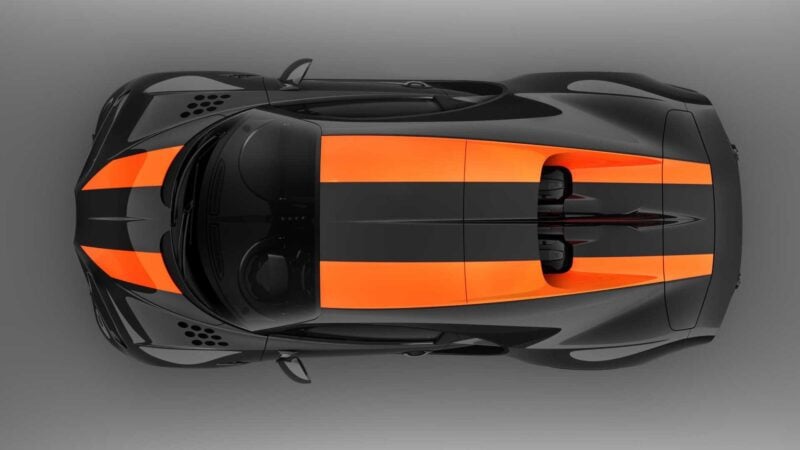 Like the Veyron Super Sport, the Chiron’s version comes with a distinctive black and orange color scheme — although you can option it in a different finish if you prefer. It also employs the same, updated bodywork as used on that 304.773mph run, which includes a new front end, new venting over the front wheel arches and that longtail arrangement at the back.

The 300+ also comes with the updated “Thor” version of the Bugatti W16 engine. Still coming in at eight liters, the newer engine produces 1,576hp — 97hp more than standard — driving all four wheels through a seven-speed dual clutch auto gearbox.

However, there’s one or two differences between the car Andy Wallace drove to the triple triple last month and the Super Sport 300+. 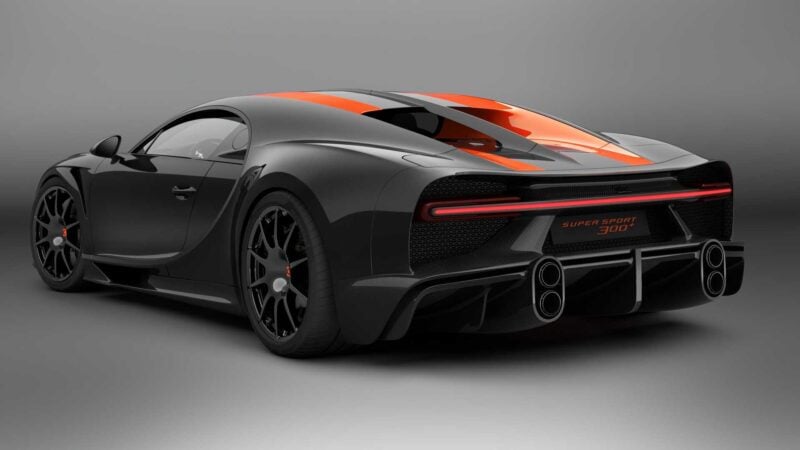 For starters, the production car won’t be able to do 300mph. Bugatti will install a standard speed limiter, although it’s not actually revealed what that limit will be. The regular Chiron has a 261mph limiter even in top speed mode, but if this is to be Bugatti’s last big punt for the fastest road car title it’s likely that the Super Sport 300+ will exceed at least the Veyron SS’s 267mph — or possibly 278mph just to mess with Koenigsegg.

If you want to go a little faster, Bugatti can reportedly disable the limiter and will give customers the chance to have a blast at Ehra-Lessien to match Wallace’s benchmark.

Other changes include proper seats — Wallace used a special racing seat, and Bugatti removed the passenger seat — and the absence of a roll cage. We reckon that Bugatti will make the car more faithful to the record car for dedicated customers. However, the 305mph car also used a fixed rear wing which is unlikely to replace the active hydraulic version on the road car due to its double-duty as an air brake. 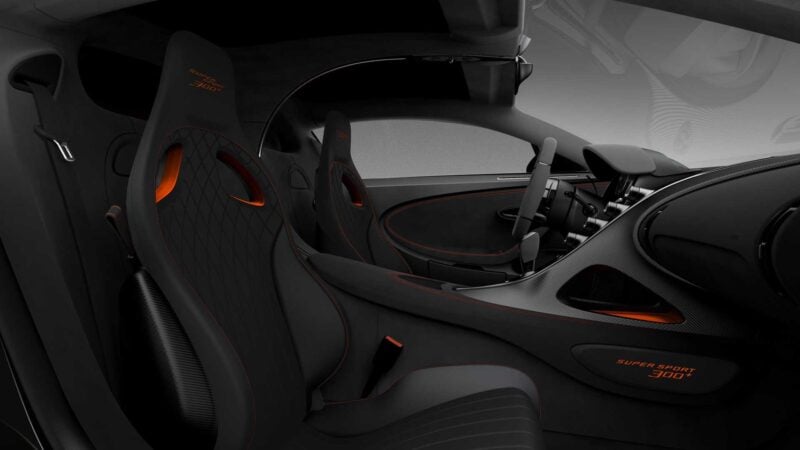 There’ll only be 30 examples of the Chiron Super Sport 300+, coming in at $3.9m before local taxes. As you can guess, it’s probably already too late to get your name down for one, with Bugatti offering up the car first to customers on its special 110th anniversary road trip across Europe which finished in Molsheim over the weekend.

The first cars should hit the streets (or arrive in static garage displays) by the middle of 2021.

Andrew Evans · Sep 9, 2019· Comments
Gran Turismo series partner Toyota has revealed a special, limited edition version of its Toyota Yaris hatchback, which not only bears the Gran Turismo 7 name but comes with a free copy of the game and a PlayStation 5 console.

Andrew Evans · Sep 9, 2019· Comments
After it surprisingly revealed a new car at the Consumer Electronics Show (CES) in 2020, Sony has taken the covers off a second model at this year’s show — and it looks like it might be planning to build them.

Andrew Evans · Sep 9, 2019· Comments
Porsche has officially taken the covers off its Vision Gran Turismo car, designed specifically for Gran Turismo 7 when it launches on March 4.

Andrew Evans · Sep 9, 2019· Comments
MG’s specialist design center, SAIC Design in London, has created a new concept car that’s not only inspired by gaming, but a games room itself.

Michael Leary · Sep 9, 2019· 13 Comments
Although Lamborghini has now officially pulled the wraps off its latest nostalgia project, the Countach LPI 800-4, you’re already too late to buy one.

Andrew Evans · Sep 9, 2019· 21 Comments
Genesis has unveiled a trio of new racing car concepts designed in collaboration with Gran Turismo, destined to take their places in the racing game series in the near future.

Andrew Evans · Sep 9, 2019· Comments
Nissan has taken the covers off the latest model of its flagship performance car, the GT-R Nismo, ahead of its market launch later this year.