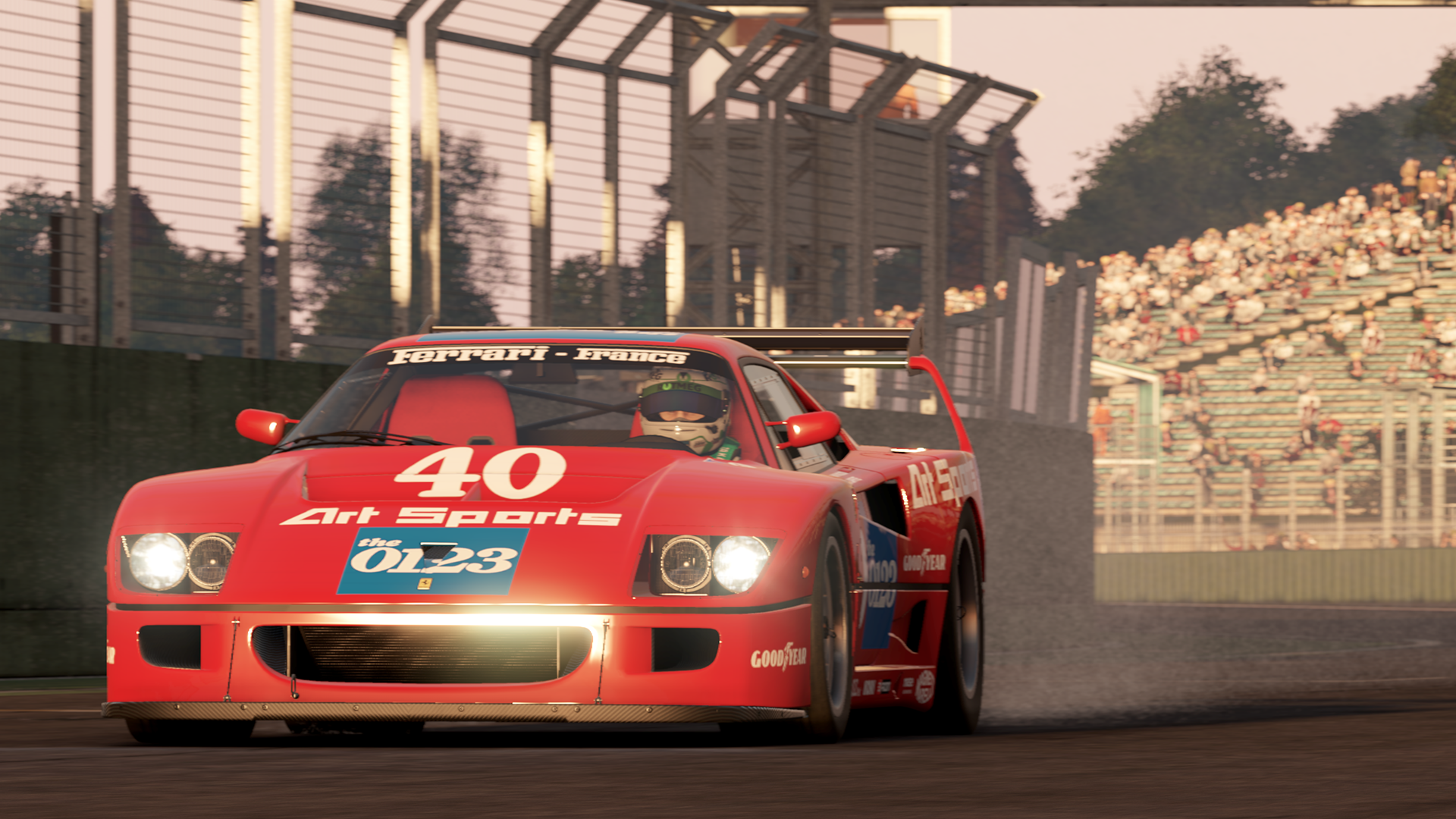 Slightly Mad Studios showed off more of Project CARS 2’s various online features earlier this week. The reveal happened during the team’s latest live stream, offering players their best look yet at what to expect next month.

The hour-long video covered a lot of ground, so we’ll be breaking it down into the main categories down below. 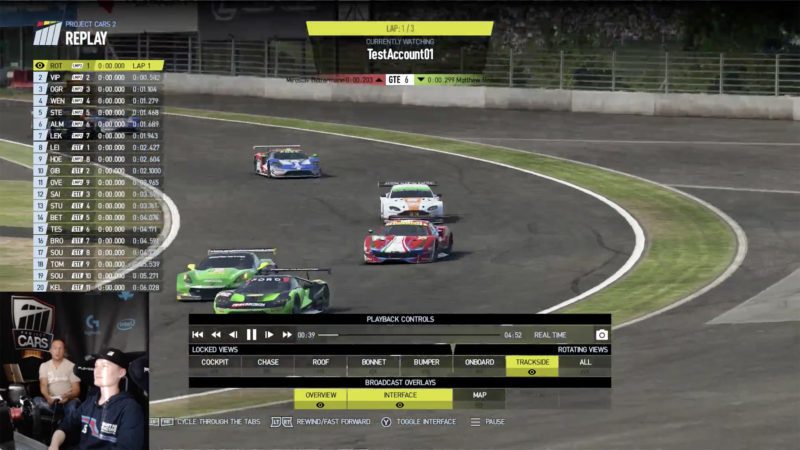 The first Project CARS was — and still is — a regular fixture in the racing esports world. SMS aims to double-down on the sequel’s appeal here, and has improved the viewer-side experience.

Take a look at the overlay up top. That’s what players can expect from replay mode. A full list of drivers on the left allows you to jump to any driver immediately; there’s no need to cycle through the field. The new setup highlights the currently-selected driver up at the top of the screen, making it easier for viewers to keep track of the action.

The replay mode features the usual raft of controls (fast forward, rewind, etc). Just like the car selection, players can pick exact replay views instead of cycling through. The camera options are split between locked and rotating options. The overriding message here is that broadcasters will have a lot of options to tailor their material.

SMS’ Andy Tudor also mentions additional options that will be available in the Director Mode. There, players can get timing splits across the bottom of the screen (just like real life). In addition, a timing board will give more in-depth info on the field’s performance.

Later on in the stream, Tudor shows off an online lobby option to add broadcaster and director slots. Crucially, neither of these player slots take up precious space on the starting grid. On PC, that means in addition to the 32 players in the lobby racing. On consoles, it’s 18 total. 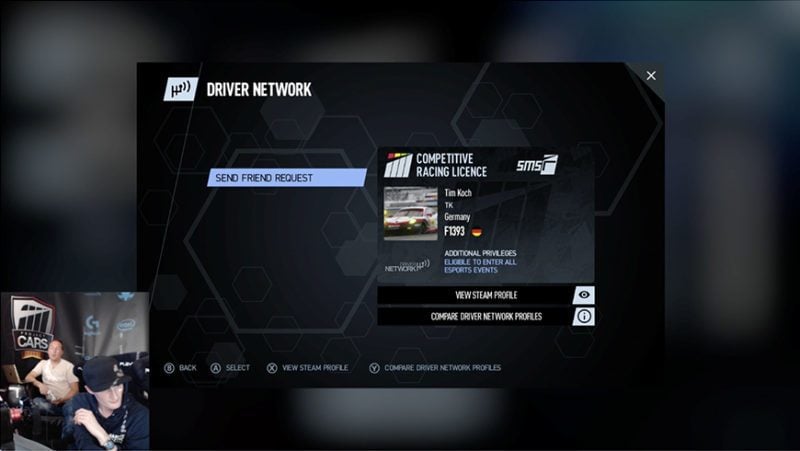 One area of the game that has been shrouded in mystery is the driver license system. While we’ve heard brief rumblings of it since the beginning of the year, the latest stream explains much more.

The Competitive Racing License will affect every aspect of the game, not just the esport aspects. All players will start with a U1500 rating: unclassified, and aiming for the lowest number possible (100). As players progress, they’ll move from U to F, then up to A, and finally the top S class. Numbers will also be shed over time, though SMS hasn’t yet provided a detailed breakdown of how players improve their score.

Tudor has good news for players that take breaks over time as well. The driver ratings won’t degrade over time: if you’re away from the game for a long period of time, you won’t come back to see you’ve been bumped back to U.

Players can dive deep into the licenses, too. As shown in the video, we can compare our licenses with any other playing Project CARS 2. The stats on display are deeply impressive, showing all manner of

The performance summary provides a detailed breakdown of a player’s experience in the game. Races started (and DQ’d), pole positions, win ratios… you’ll get a very clear picture of how a racer has performed in PCARS2 here. There’s also a simple graph to show where their time is spent: a lot of time in engineering shows a player focused on finding that perfect setup.

Sliding over to the Affinity tab, we can see what cars and tracks players prefer. The examples up top are sorted by distance driven, but there will be other options for players to cycle through. The license also keeps track of a player’s preferred input method and driving view. Handy.

As mentioned in the stream, these detailed breakdowns should be very useful to players. Not only will they provide an idea of who you’re up against, they can work as effective recruitment tools for racing teams or league organizers.

We’ve only covered some of the information SMS revealed in the stream. Stay tuned for more info on the game’s various online hosting features soon. If you want to catch up on the stream yourself, head here.

Gary Slater · Aug 19, 2017· Comments
Racers on Xbox One can look forward to a titan of a racing game this April as part of Microsoft’s monthly “Games With Gold” program. Previous big-name titles that have gone free as part of Games with Gold include Forza Motorsport 6 and its open-world counterpart, Forza Horizon 2.

Kyle Patrick · Aug 19, 2017· Comments
The premiere yearly Project CARS 2 esport series is back for 2019. There’s €20,000 in prize money up for grabs, and the return of fan-favorite multi-class racing.

Kyle Patrick · Aug 19, 2017· Comments
Has it been a year already? Project CARS 2 celebrated its first anniversary recently. To get in on the festivities, we’re invited the community to share its best memory of the game in photo form!

Kyle Patrick · Aug 19, 2017· Comments
If you loaded up Project CARS 2 earlier today — and you’re in Australia — you may have noticed a rather large update available. Weighing in at 4GB or so depending on platform, the size and timing make it clear: the horses are coming.

Kyle Patrick · Aug 19, 2017· Comments
All the pretty horses. With news of a certain Prancing Horse marque’s upcoming DLC popping up over the weekend, we thought it was high time to focus on Ferrari in this, our latest Project CARS 2 Photo Mode Competition.

Kyle Patrick · Aug 19, 2017· Comments
Things have been a little quiet on the Project CARS 2 front of late. Luckily that’s come to an end, after the Xbox Store inadvertently released a trailer for the game’s next DLC pack.

Kyle Patrick · Aug 19, 2017· Comments
Have we really hit 20 iterations of our modern photo mode competitions? To celebrate, we’re casting a wide net this round, eschewing a theme to find the best shots out there.