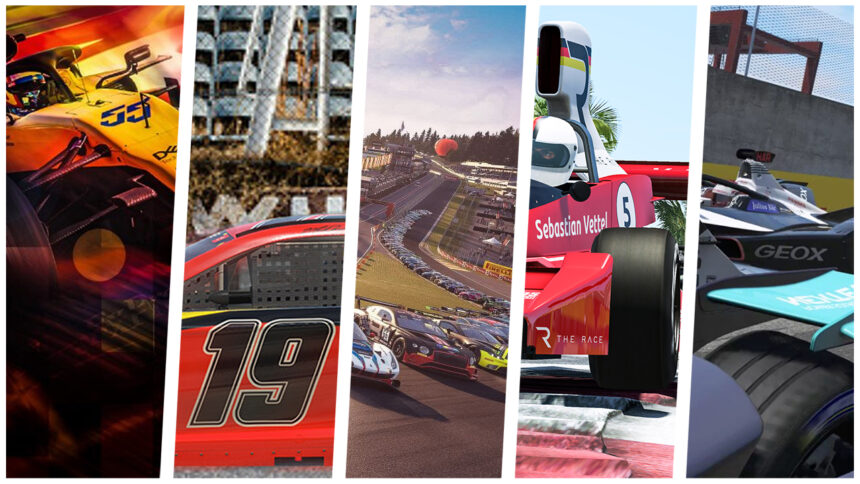 Virtual motorsport continues to come to the rescue of the real world this weekend, with plenty of action from series around the world. Whatever your particular motorsport preference, you’re likely to find something digital to fill the gap.

Last weekend proved highly controversial, with numerous crashes putting the spotlight on driver behavior and the world of sim-racing. Whether the sport, its participants, and the organizing bodies have learned any lessons from the incidents remains to be seen. However, over the last nine weeks, viewers can hardly complain of a lack of excitement!

There’s more to come this weekend, and you can keep across it all below:

The electric race cars head back to Monaco this week, the venue for the pre-season test event, for a points-scoring round. Formula E uses an alternate layout of Monaco, with the course heading down to the harbor after St. Devote, then hooking back on itself at Nouvelle Chicane — a hairpin — onto the back half of the traditional F1 circuit.

Maximilian Guenther is three-for-three so far this season. While not necessarily the fastest on the grid, as Stoffel Vandoorne has shown with back-to-back pole positions, the BMW driver has been able to mix consistent speed with keeping it on the island — letting the chasing pack crash themselves out of contention. The tight Monaco circuit should play to his strengths.

Adding some female faces to the Formula E grid this week are Simona de Silvestro, Porsche’s Formula E development driver, and Sophia Floersch. Floersch was due to test in Formula E in 2018, before her incredibly violent crash in Macau, and will race on the sim-driver grid for Mercedes this weekend.

The first race starts Saturday May 2 at 1425 UTC, and you can watch it on Youtube below:

Last week’s All-Star events saw the esports debut of arguably the biggest name yet: Sebastian Vettel. The four-time F1 champ was a late entrant for the Legends Trophy event, but didn’t make too much impact. Whether he returns for a second weekend remains to be seen, but the grid remains largely as it did last weekend. One notable addition will be touring car and Dakar star Tom Coronel, whose twin brother Tim was a GT Academy judge.

A new manufacturer series saw Mercedes-Benz take an early lead with two wins, but it’s ex-NISMO Athlete Alex Buncombe driving for Bentley that leads the driver field. Hyundai will be joining in this week, to become the fifth manufacturer alongside BMW and Aston Martin. The sim racers will also resume their championship, with Jernej Simoncic at the head of the pack.

The action starts at 1600 UTC on Saturday, and you can watch it all below:

It’s the last week for the NASCAR event, as it plans to return to real-world racing next Sunday. Hopefully the season concludes in a better manner than IndyCar managed last weekend. The venue is certainly unusual, with the defunct North Wilkesboro Speedway. A short 0.625-mile oval set on a slope — so the front straight is uphill and the back downhill — NWS closed in 1996, bar a brief spell of racing in 2010-2011.

The last driver to win a NASCAR Cup Series race at the track was Jeff Gordon, and he’s returning for this weekend’s race. Bar Gordon, the only other drivers on the grid with experience on the North Carolina track are Dale Earnhardt Jr and Bobby Labonte. It’s a packed grid again this week, but the absence of three-time winner William Byron means there’s an opportunity for another name on the top step.

This week’s race is at 1900 UTC on Saturday, and as it’ll be live on NBCSN there won’t be a live stream. We’ll add the full race replay when it’s available, but for now you can catch up with the highlights reel below:

After a break last weekend, the Pro-Am SRO event returns for some GT racing action from one of the world’s most fearsome circuits: Spa-Francorchamps. Both the pro series and the silver series — for seasoned sim-racers — will head to the track this weekend, with the Am series still in the qualification stages.

It’s a pretty packed grid again, with ten manufacturers competing in the Pro series. Jordan Pepper won the race at Silverstone for Bentley, which means weight penalties for the team — including Alex Buncombe. Jenson Button returns to race his own McLaren 720S, while ex-F1 driver and twice Formula E champion Jean-Eric Vergne is on the grid this week as a Ferrari team wildcard.

There’s a pair of one-hour races, starting this Sunday at 1145 UTC. You can watch the whole event live below:

This weekend would have seen drivers head to the Spanish Grand Prix and the Circuit de Barcelona-Catalunya. As that’s off the schedule, the Virtual Grand Prix returns, and it’s at the same venue.

The six F1 regulars — Leclerc, Norris, Russell, Latifi, Giovinazzi, and last week’s winner Albon — all return, with an interesting variety of teammates. You’ll get to see a Hamilton back at McLaren but, despite his preparations, it’s not the six-time champion. Younger brother Nic will pair up with Norris in the orange cars.

The broadcast starts at 1700 UTC on Sunday May 10, and you can watch below: