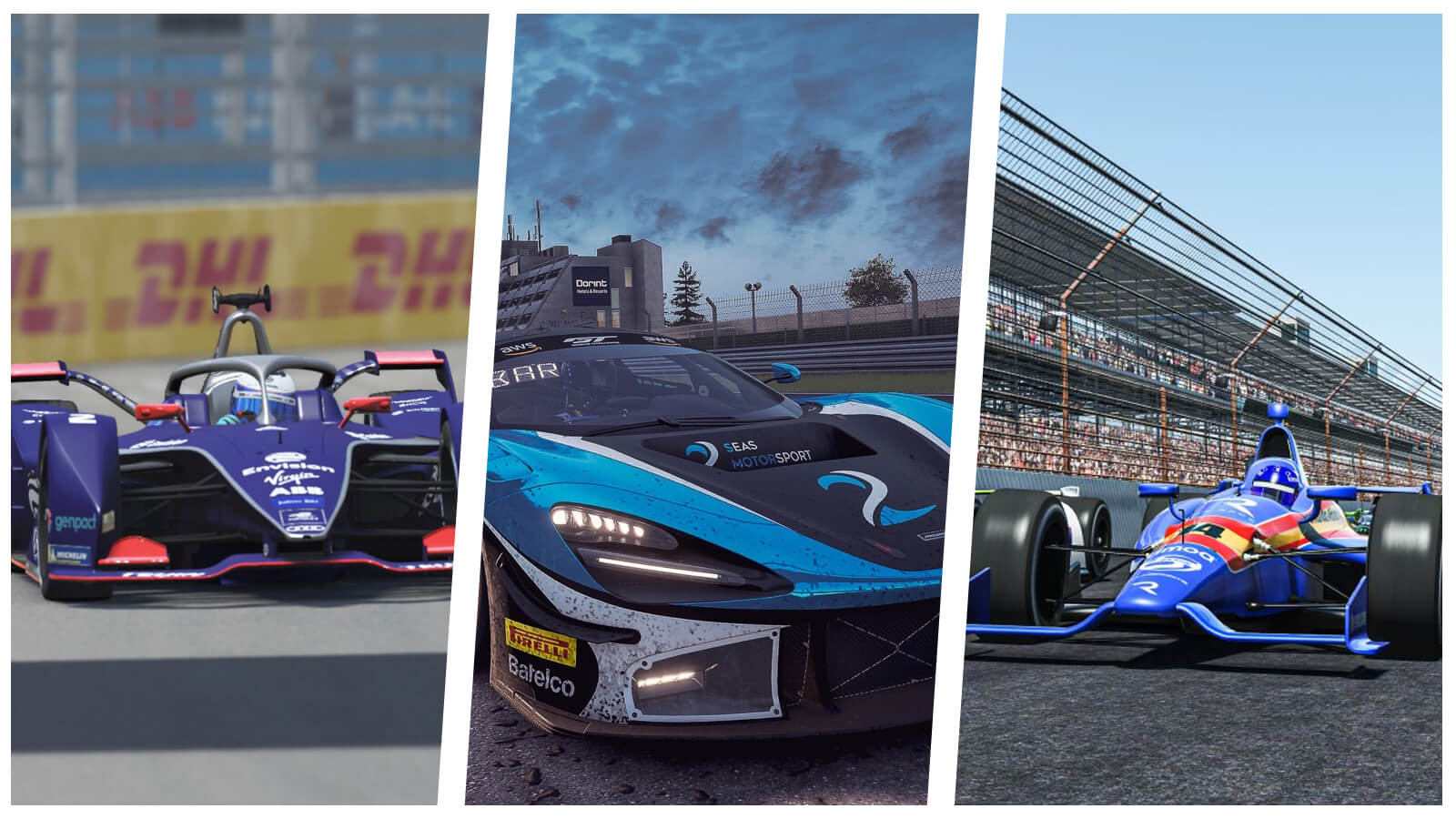 After last weekend’s exciting, packed, and controversial weekend of esports, there’s still more action to come. Aside from NASCAR, the world of physical motorsport hasn’t restarted after a prolonged layoff, but the digital world continues to spin.

As it wouldn’t have been an F1 weekend in the normal timeline, the virtual F1 action is hitting a pause button. That brings plenty of focus onto the other regular series, with the SRO event for those who like their car to have a roof and Formula E if motors are more your thing.

There’s plenty to watch, and you can catch it all right here on this page. Here’s what you’ve got to look forward to this weekend:

It’s the last regular race for Formula E’s Race At Home event this weekend, ahead of the grand final on June 7. The series will be hoping to put last week’s shenanigans behind it, with Daniel Abt booted from the series — and his real-world race seat — after letting a sim racer drive for him, apparently as an ill-judged prank for his YouTube following.

Again it’s a new track this week, with the New York City ePrix circuit hosting the race. It’s a tight, 14-turn circuit sited in Brooklyn, around the Brooklyn Cruise terminal. Pascal Wehrlein still has the championship lead ahead of new second-place man Stoffel Vandoorne — who can feel aggrieved it’s not closer after several pole positions and a scrap with Not-Abt at Berlin.

Along with the sim racer event, the action all gets underway at 1425 UTC on May 30.

Last weekend saw Fernando Alonso — in only his second ever esports event — achieve what he couldn’t in real life, and win at Indy. Not only that, he did it back-to-back, despite the reverse grid race. The Legends head into their final championship this weekend, and it’s Jenson Button leading the way thanks to two top-five finishes at Indy.

The other two series also conclude this weekend, with Bono Huis leading in the Sim Masters and Esteban Gutierrez in the Pro Cup — though his Mercedes team is second fiddle to Aston Martin. You’ll be able to watch all three events, from Silverstone, from 1600 UTC on Saturday.

If you like your action a little dirtier, the FIA World Rallycross is back after a little break. The event, using DIRT Rally 2.0, will see a host of big names from the world of rallycross — and beyond — hitting the mixed-surface racing at Abu Dhabi’s Yas Marina Circuit.

There’ll be 22 races packed into the 2.5-hour broadcast, which gets underway at 1230 UTC on Sunday.

Posted by FIA World Rallycross Championship on Friday, May 29, 2020

The SRO event will run a triple-header this weekend, with all three categories racing — albeit at two different tracks and on different days. It’s the Am Series which will get underway first, for its third round from the Nurburgring on Saturday. Samir Ibraimi is leading this event for Porsche, despite not winning either of the opening rounds.

Saturday’s race starts at 1900 UTC, with the Sunday event — which you can watch below — at 11.45 UTC the following morning.

Andrew Evans · May 30, 2020· Comments
The United Kingdom’s James Baldwin has taken the gold medal in the esports discipline at the FIA Motorsport Games, to give the country its first ever category gold.

Andrew Evans · May 30, 2020· Comments
The FIA Motorsport Games will crown its esports champion today, with the semi-finals and final taking place live from the Mistral Hall at Circuit Paul Ricard.

Andrew Evans · May 30, 2020· Comments
The world’s best virtual racers will be gunning for the medals in the FIA Motorsport Games Esports event over the next two days, starting with the quarter-finals on Friday October 28.

Andrew Evans · May 30, 2020· Comments
The UK’s Jonathan Riley has taken victory at the 2022 Ferrari Velas Esports Series Grand Final, claiming the prize of a paid, professional seat on the factory Ferrari esports team.

Andrew Evans · May 30, 2020· Comments
The 2022 Ferrari Velas Esports Series reaches its climax today, with the Grand Final coming from Ferrari’s headquarters in Maranello.

Andrew Evans · May 30, 2020· Comments
After six months of racing, the final six competitors in the 2022 Ferrari Velas Esports Series have gathered in Maranello for the Grand Final, which will broadcast on Sunday October 2.

Andrew Evans · May 30, 2020· Comments
The 2022 Ferrari Velas Esports Championship is now down to its final six drivers after two evenings of racing in the Regional Finals.

Andrew Evans · May 30, 2020· Comments
Half of the names heading to the 2022 Ferrari Velas Esports Championship Grand Final are now locked in, and today’s North American Regional Final is set to decide the remaining racers.