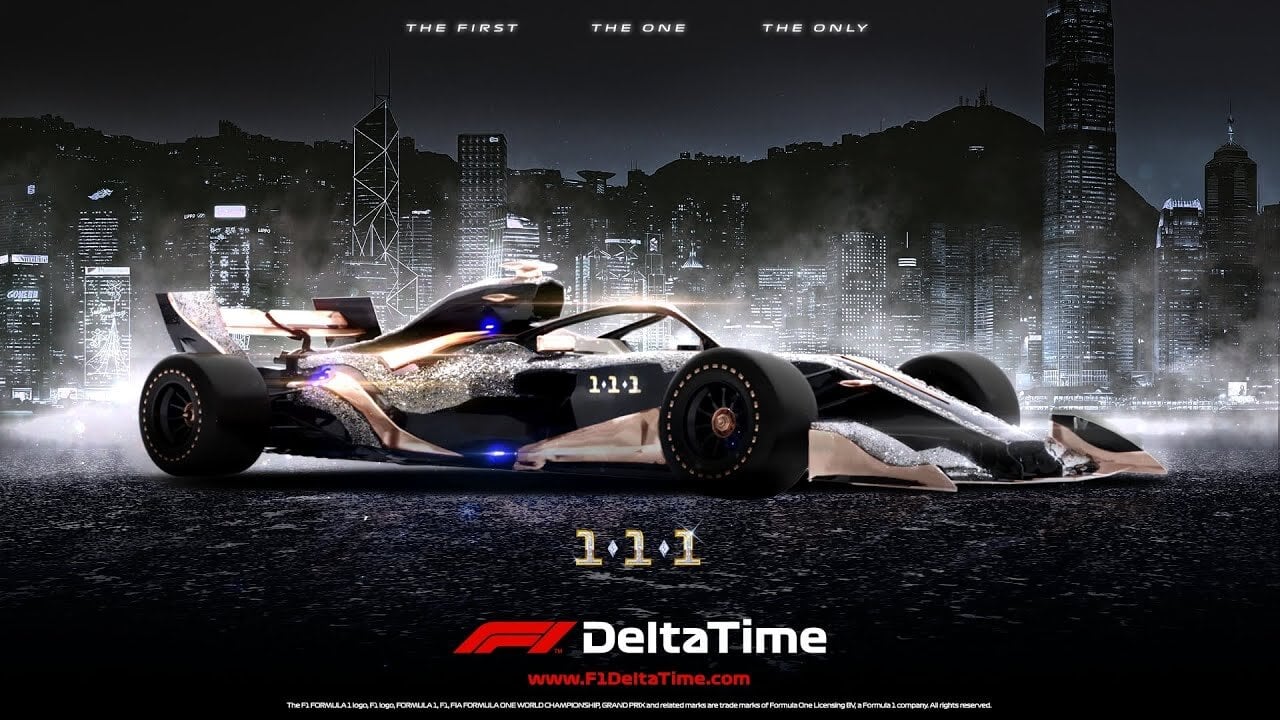 An as-yet unidentified person has purchased an exclusive “virtual car” for more than $100,000 USD in an unreleased, officially-licensed Formula 1 game you have almost certainly never heard of.

If you think that sounds crazy, keep reading. There’s a lot of weird stuff to digest here that has far-reaching implications for both the future of racing games and Formula 1, so we’ll cover things one at a time.

That’s a good question. No-one has been saying much about exactly what “F1 Delta Time” is.

Animoca Brands announced it as a “blockchain game” earlier this year. It’s developed the game in an official partnership with Liberty Media Group, the owners of Formula 1. Animoca revealed F1 Delta Time with little fanfare — receiving attention only from cryptocurrency websites — and has flown quietly under the radar until now. 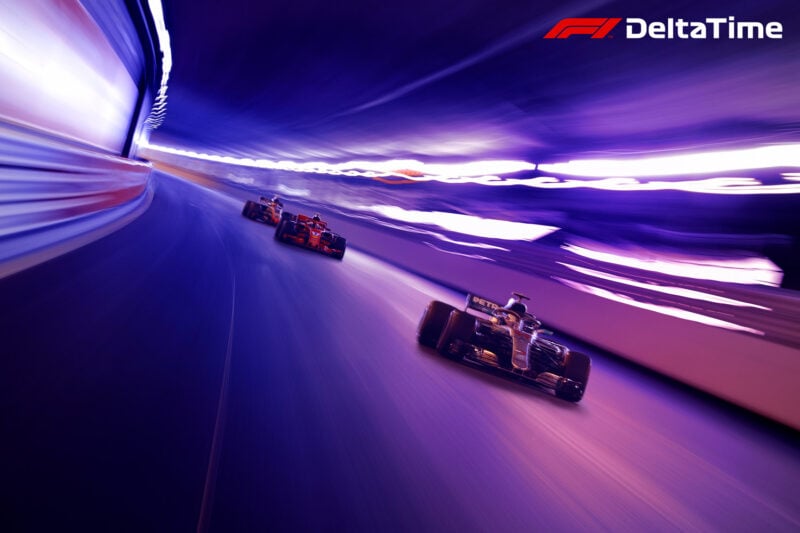 What is a “blockchain game”?

You have probably heard about blockchain used in the context of discussions around cryptocurrencies like Bitcoin. A full explanation of blockchain is beyond the scope of this article (I recommend this explainer video, if you’re interested), but the easiest way to think of it is an open, decentralized ledger of transactions that anyone can read with confidence that it is accurate.

While cryptocurrencies are the most widely-known use for blockchains right now, people are quickly figuring out other ways to use them. One promising application is games, thanks to something called “non-fungible tokens”, or NFTs.

NFTs are unique digital assets that you can buy, sell, and own. Think of them like virtual trading cards, of which only one exists. It might be hard to imagine that something virtual is unique, or entirely “owned” by one person, but thanks to the blockchain, anyone can verify that it is only being used by its rightful owner.

One of the most popular NFT-based “games” is CryptoKitties, which allows you to breed, trade, and play with one-of-a-kind virtual cats — oh, what a time to be alive!

What does this have to do with racing?

Formula 1 is aiming to take this dynamic a step further with F1 Delta Time. NFTs would allow players to own unique cars and drivers in the game, to compete in virtual racing events.

F1® Delta Time is a blockchain-based game which will utilise the ERC-721 and ERC-20 standards, and run on the Ethereum blockchain.

The game will center around the collection and trading of unique Cars, Drivers and Components – all of which will exist as non-fungible tokens (NFTs) based on the ERC-721 token standard.

In F1® Delta Time, all Cars, Drivers and Components will be NFTs, and will possess special raceday attributes which will increase players’ chances of out-performing competition on the track. Tokens are produced in limited quantities as determined by their level of rarity, with the rarest tokens possessing the most impressive racing attributes.

To hype the upcoming launch of F1 Delta Time, Animoca put the game’s very first item up for auction: a unique F1 car called the “1-1-1”.

Its auction page describes the 1-1-1 as “the first car to be released for F1® Delta Time, and we made this a hyper-limited edition: there is just one single 1-1-1, and there will never be another. It’s truly a one-of-a-kind digital collectible.”

The auction page also includes an odd YouTube video and “boost” stats for the car. This includes metrics for “acceleration”, “grip”, “luck”, and “top speed”, which seem to offer insight into how the game will actually function.

Running for around four days, members of the public could place bids for the 1-1-1 in Ethereum cryptocurrency. After receiving 31 bids, an anonymous bidder known as “09E282” bought the car for 415.9 ETH. That’s equivalent to $101,336.40 USD at the time of purchase. 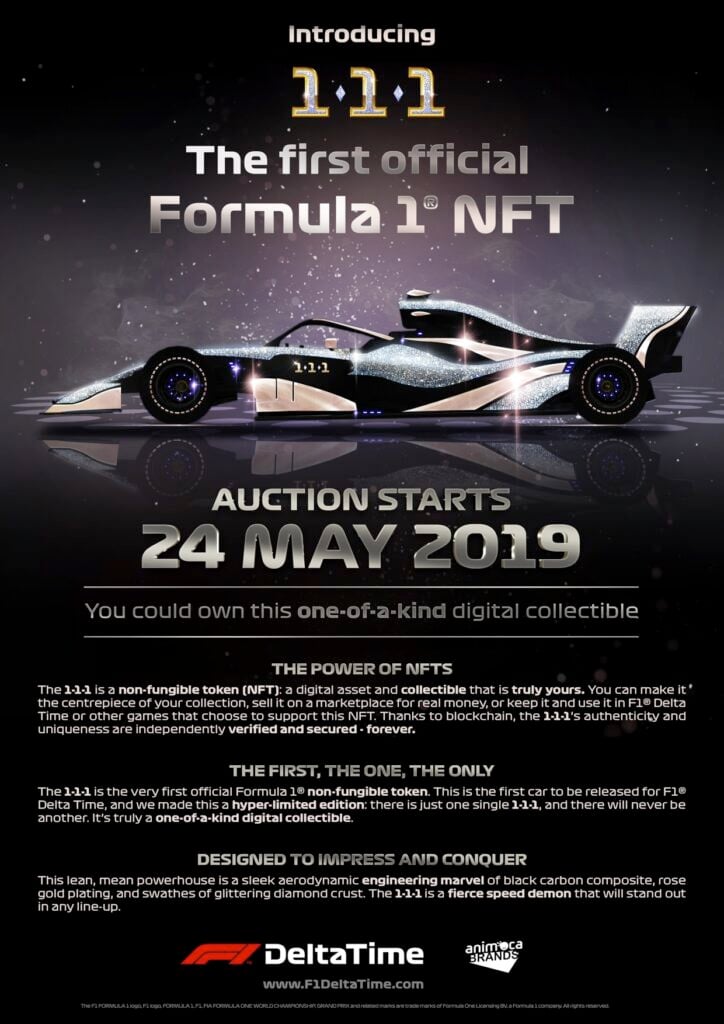 That is the hundred-thousand-dollar question, which at this point, can only be answered by “09E282”, whomever they might be (if you are reading, please contact us!).

Why would anyone spend that much money on a virtual car in an unreleased racing game that few people know anything about? While NFT-based cryptocurrency games like F1 Delta Time are interesting and exciting new ways to use blockchain, this investment is so outrageously bizarre that it seems almost suspicious.

Was Animoco just using this auction to build publicity around its new game? Could some wealthy F1 fan with a penchant for cryptocurrency speculation really have spent $100,000 on the 1-1-1?

At this point, there are a lot more questions than answers. We’ll be keeping a close eye on F1 Delta Time and the 1-1-1 moving forward to see how this all plays out.

Andrew Evans · May 28, 2019· Comments
The latest Forza Horizon streams have revealed what players will be getting up to over the next couple of months, with the new Series themes, activities, and rewards for Series 15 and Series 16.

Gary Slater · May 28, 2019· Comments
As 2022 begins to enter the closing stages, Forza Horizon 4 welcomes December with an apt Winter season. With festive plans beginning to take shape, players are continuing to hunt down the latest events.

Andrew Evans · May 28, 2019· Comments
The final set of Forza Horizon 5 seasonal playlist challenges for the current Series is available from today, with seven more days to get through the donut-based activities.

Andrew Evans · May 28, 2019· Comments
The latest seasonal preview for Forza Horizon 5 will stream later today, Thursday December 1, revealing what new content, challenge, accolades, events, and world changes are coming up for players over the next couple of month.

Andrew Evans · May 28, 2019· Comments
Gran Turismo 7’s latest set of Daily Races is now available, with new events for the next week including the second rotation of special World Finals events.

Andrew Evans · May 28, 2019· Comments
GTPlanet had the opportunity to sit down with Gran Turismo series creator Kazunori Yamauchi as part of a round-table interview during the recent GT World Series Finals in Monaco.

Andrew Evans · May 28, 2019· Comments
One of the bigger stories surrounding Gran Turismo in 2022 is production finally beginning on the long-awaited movie of the same name.

Andrew Evans · May 28, 2019· Comments
As the curtain drops on another exciting season of the Gran Turismo World Series, Polyphony Digital is already looking forward to a bigger and better 2023.