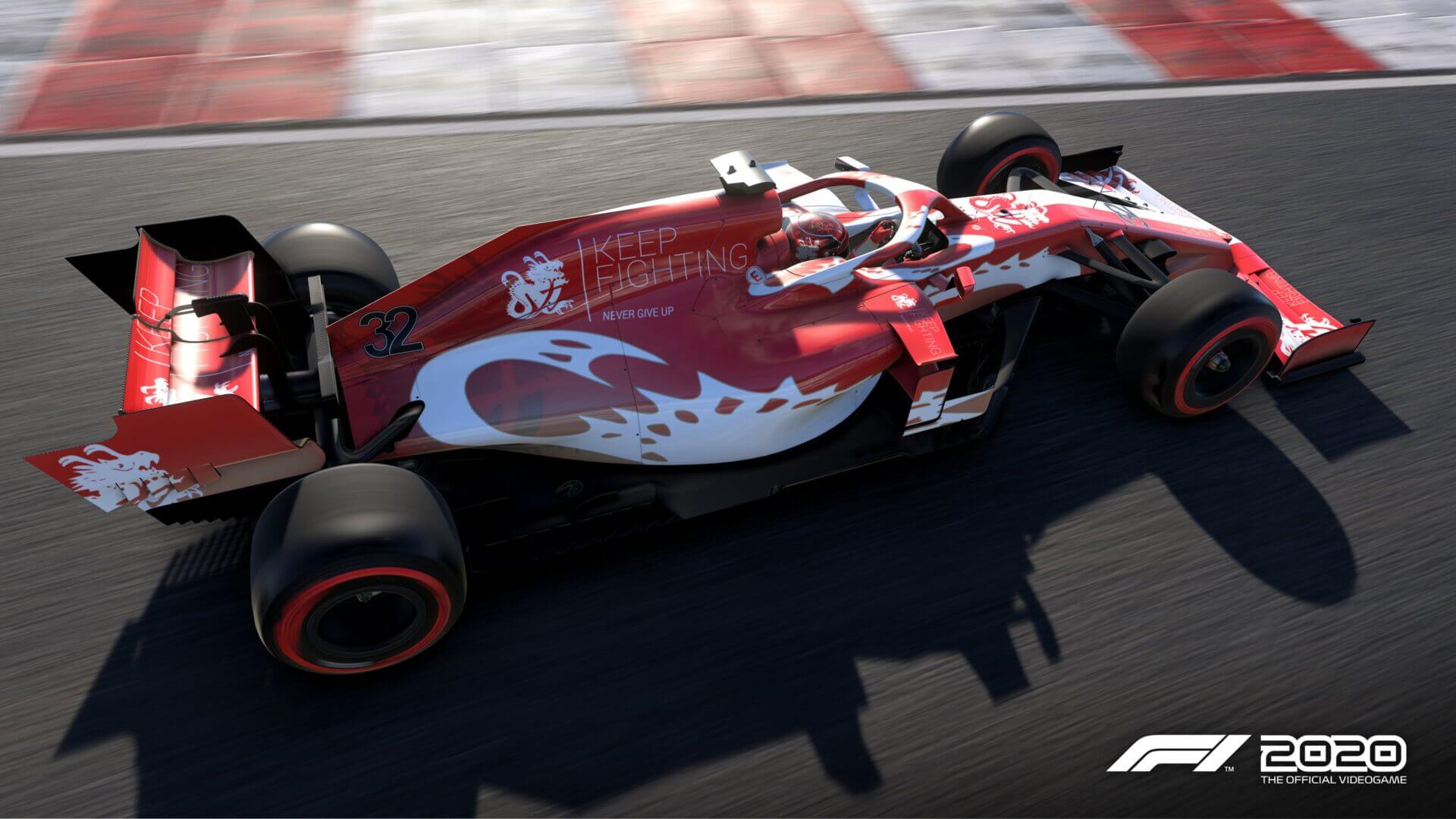 There’s a new update now available for F1 2020, and it brings along an interesting additional offering. It’s a DLC pack that goes by the name of “Keep Fighting Foundation DLC”, and it’s all in aid of charity.

The pack comes in at $4.99 (£3.99/€4.99), and adds the usual set of customization items. There’s a new car livery, a podium celebration, race suit including helmet and gloves, and a badge. All celebrate the Keep Fighting Foundation, and the proceeds from all sales will go to the charity.

If you’re not familiar with the Keep Fighting Foundation, it’s a charity set up in Germany to continue the philanthropic work of Michael Schumacher. Seven-time world champion Schumacher’s work for charity is well known, with the driver appointed a UNESCO ambassador in 2002. He’s also donated tens of millions of dollars to charity — often to otherwise low profile causes around the world.

It’s something he’s not been able to actively participate in since a near-fatal skiing accident in 2013. Schumacher sustained serious head injuries and has been out of the public eye ever since; even his current health is unknown outside of his family and medical team, though his long-time friend and colleague Jean Todt, president of the FIA, says he watches the F1 races on television.

Keep Fighting exists to continue these charitable projects, and you’ll see its slogans throughout the real F1 grid. Given that the F1 2020 game also had a special edition release celebrating Michael Schumacher, it’s only natural that the Keep Fighting message is also marked in the game. Lee Mather, F1 franchise game director at Codemasters, commented:

“It was an honour for the studio to focus on Michael’s record-breaking F1® career for the F1® 2020 Deluxe Schumacher Edition. We are equally proud to support the Keep Fighting Foundation. Many of our players regard Michael as the greatest of all time, and we know the exclusive items will prove incredibly popular.”

The Keep Fighting Foundation DLC is available with the 1.07 update to F1 2020. That’s available now for PS4, Xbox, Stadia, and PC.

Andrew Evans · Aug 12, 2020· Comments
There’s a new patch available for F1 2020 today, adding the complete set of cars and drivers from the past season of Formula 2.

Andrew Evans · Aug 12, 2020· Comments
If you weren’t sure whether F1 2020 was for you, now is the ideal time to find out. For PlayStation 4 and Xbox One owners there’s a new free trial version of the game to give you a taste of the action.

Andrew Evans · Aug 12, 2020· Comments
There’s another chance for players to qualify for the 2021 F1 Esports Challenger Series this month, with the second of F1 2020’s official events. Just like October’s event, you’ll be recreating — and hopefully improving upon — some F1 history in your bid to get into the 2021 event.

Andrew Evans · Aug 12, 2020· Comments
This year’s F1 Esports competition starts in just under two weeks, but if you want to find yourself in the hot seat next year the process begins right now.

Andrew Evans · Aug 12, 2020· Comments
While there’s been an annual release of an official F1 game every year since 1996, F1 2020 is the 13th such game since Codemasters picked up the official licence.

Andrew Evans · Aug 12, 2020· Comments
In June we announced a new initiative here at GTPlanet: the GTPlanet Guides. The Guides section of the site is resource we’ll be building up over the coming weeks and months, into a comprehensive library of about the biggest topics we cover.

Andrew Evans · Aug 12, 2020· Comments
This year’s real world motorsports calendar has, so far, been rubbish. Right now we should be half way through the 2020 season but, following the last-minute cancellation of the Australian event in March and almost every event since either going in the bin or into a perpetual holding pattern, we’re only one race down.

Andrew Evans · Aug 12, 2020· Comments
With just over a week to go (or less) until F1 2020 arrives, Codemasters has revealed some more information about the variety of features the game will include.