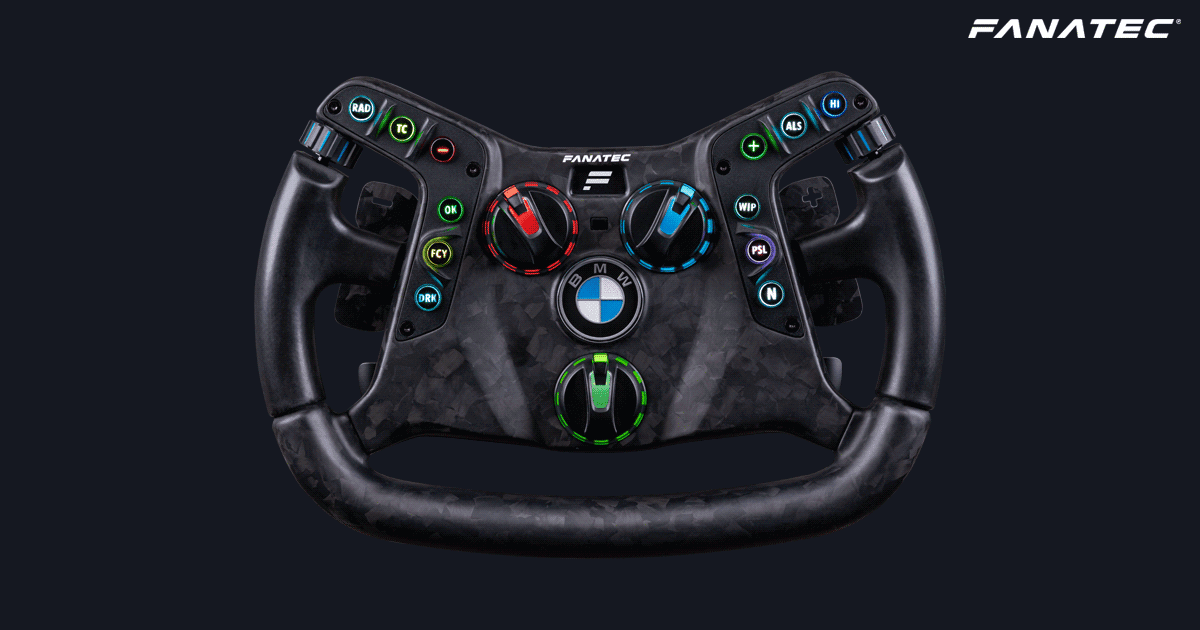 Fanatec has revealed a new sim racing wheel that you can take off your driving rig and fit into a real race car.

This rather unusual blurring of the line between real and virtual comes as a result of a collaboration between Fanatec and BMW. It’s called the Podium Steering Wheel BMW M4 GT3, and it’s considerably more than a mere gaming peripheral, or a licensing gimmick. The wheel will be the actual steering wheel used in the BMW M4 GT3, due in 2022.

BMW and Fanatec have designed the wheel in tandem. It’s fully homologated for GT3 racing, so BMW’s drivers can use it in their M4 race car, and it also slots into any Fanatec wheel base via a new QR2 quick-release connector. That allows for GT3 drivers to put in their simulator training and then transfer to the real car at the real track with the exact same wheel.

The 12-inch (310mm) wheel has an eight-layer carbon fiber body, and comes in at a pretty sturdy 3lb (1.4kg) in weight. There’s a one-inch (25mm) OLED display in the center, and it’s naturally festooned with buttons and dials.

In total there’s 14 different push buttons — 12 on the front and two on the rear — each with 7N activation force, and those on the wheel face are also backlit (with options to change the colors) for night racing. You’ll also find three, 12-position rotary switches, also backlit, and two, 12-step thumb dials. There’s a four-way D-pad within the BMW logo itself too.

The shifter paddles are magnetic and have dual action, so you can push or pull them. In addition there’s two dual Hall sensor clutch paddles. The wheel communicates with the wheel base as any other Fanatec wheel would, and uses CANbus for communication with the real M4 GT3.

Fanatec states that the wheel is PC-compatible — naturally — but also fully functional on PlayStation 4 and PlayStation 5 when connected to a licensed wheel base. Although you likely won’t need it in your gaming set up, it’s also IP65 rated, so the innards are protected from dust and also significant quantities of water.

“You have to take your hat off to the pioneering role that BMW Motorsport and Fanatec have taken on here, and to the courage to implement a project of this kind. I know the people who were involved in the development at BMW Motorsport and at Fanatec, and never doubted that they would design a superb steering wheel.

“Compared to the steering wheel in the BMW M6 GT3, for example, the new wheel has extremely good ergonomics. It is very comfortable to hold. You can tell that real professionals have been at work in every area.”

As yet, we don’t have a price for the Podium Steering Wheel BMW M4 GT3, but we wouldn’t expect it to come in anywhere under four figures. It’ll be available to buy, whether you want it in a sim ring or in a race car, starting in the second quarter of 2021.