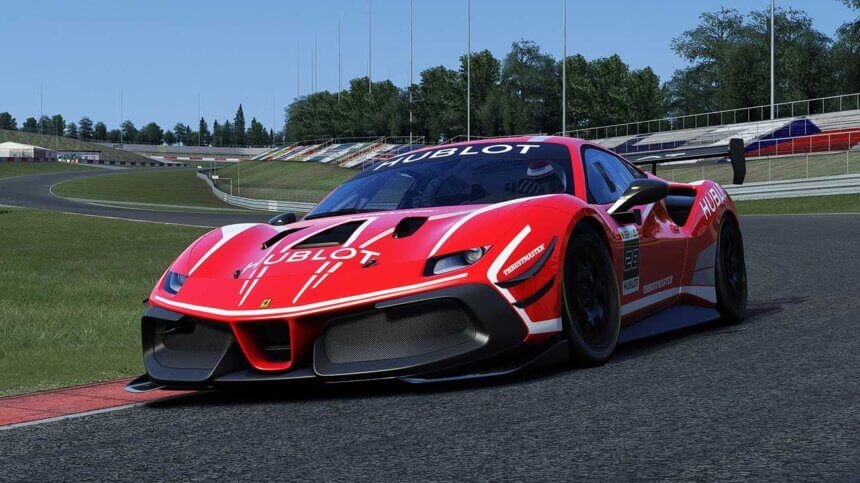 Ferrari has launched a new esports competition, which it hopes will find the next big talent in sim racing. It’s called the Ferrari Hublot Esports Series, and the prize for the eventual winner is a spot on the Italian brand’s own esports team.

Sign-ups are open soon for the event which gets underway in September. The series will run in Assetto Corsa, although it’s not clear at present whether this is on the PC only or available across its platforms. Participants will then face a series of tests in the Ferrari 488 Challenge Evo, which will be available exclusively to those who are taking part.

In total there’ll be four weekly qualifier events across September. The top six players from each qualifier will then participate in a special “AM Series” in October, with a further four races to whittle the field down to 12 finalists.

Running at the same time as this will be a PRO Series. This will see 24 sim racers invited by Ferrari to run the same races, though not at the same time. Again, this will select 12 finalists. The two groups of drivers come together for the finals in November, as all 24 battle to be the best driver overall from three more events.

Ferrari will then offer whoever takes the title the chance to join its 2021 squad in the Ferrari Driver Academy Hublot Esports team. As you’ll likely be aware, this official Ferrari driver squad joined the F1 Esports Series for the first time in 2019, and David Tonizza duly claimed the title for drivers.

For now, this Ferrari Hublot Esports Series is only open to drivers resident in Europe, and all players must be over the age of 18. You can sign up on the official series website starting on August 7, though you can pre-register now.

Ferrari
6 Comments Discuss this post in our forums...
Test Your Badge Knowledge With Our Car Logo Quiz

DIRT 5 1 May 10 by Andrew Evans
A new update is coming to DIRT 5 this week, bringing new features and new content to all players, including cross-platform play The update is officially known as the Red…

Hardware 3 May 10 by Andrew Evans
Hot on the heels of the new CSL DD direct drive wheel, racing peripheral manufacturer has revealed another new product aimed squarely at bringing its technologies to a lower price…

Gran Turismo Sport 12 May 10 by Andrew Evans
A new game update for Gran Turismo Sport will arrive this week, according to an in-game announcement mirrored on the official game website. The update will follow a period of…

Gaming 7 May 7 by Andrew Evans
Raceward Studio has unveiled the first gameplay video and images of motorbike racing game RiMS Racing. The title, revealed in April, brings together eight of the most powerful motorbikes in…