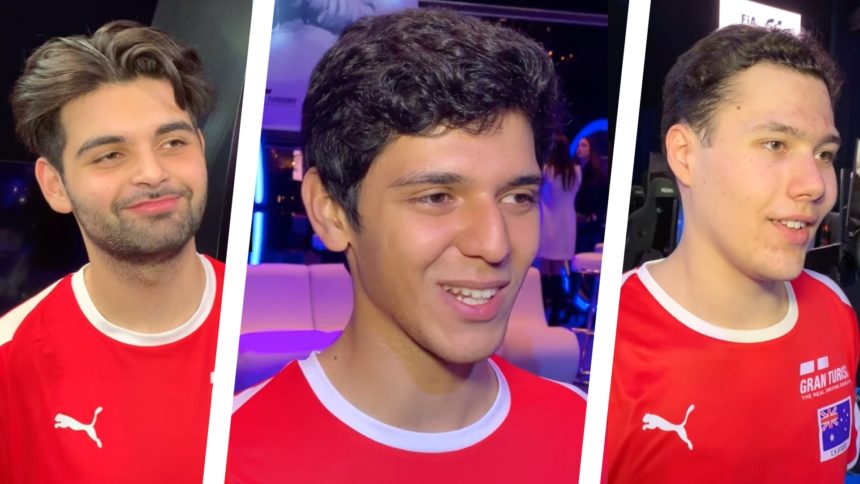 After all the confetti had dropped at the FIA-certified GT Championship Nations Cup World Final on Sunday night, we had a chance to speak with all the podium finishers about their races and their time in Monaco.

In case you missed the Nations Cup Final, you can re-watch it here or just check out our full race-recap to see how it all went down.

Consistent driving earned Australian driver Cody Nikola Latkovski a spot on the podium, as he slowly but steadily moved up the points leaderboard after each race at the World Finals.

After winning the EMEA Championship in Madrid, there were a lot of eyes on Hizal at the World Final and many picked him to win the whole thing. He almost did just that, but for a poor finish in the second race at Interlagos.

Hizal ate two cookies before the race, one of which was a gift from the infamous Translator-san.

Although Fraga was a popular favorite leading into the last day of competition, none of it came easily for the Brazilian. He was 2nd in the points standings and 10th on the grid heading into the final race. He needed to win, and more importantly, he needed points leader Yamanaka to finish far enough back to take the championship away from him.

That’s exactly what happened, in a wild, dramatic finish that saw Fraga take the race win — and the championship.

Congratulations to you all!

2018 FIA GT Championship World Final
2544 Comments Discuss this post in our forums...
GT Sport Circuits Quiz: Can You Spot the DLC Track From These Detail Shots?

Gran Turismo Sport 31 Feb 28 by Andrew Evans
Since GT Sport launched back in October 2017, the Polyphony Digital team has brought an impressive number of new circuits to the game. From old favorites like Laguna Seca and…

Gran Turismo Sport 531 Feb 24 by Andrew Evans
For this week’s GT Sport Daily Races you’ll be heading to two racing circuits on opposite sides of the Pacific Ocean, and indulging in a spot of street racing. Race…

Gran Turismo Sport 2046 Feb 17 by Andrew Evans
GT Sport‘s first World Tour event of the year is still fresh in our minds, but already it’s time to prepare for the next stage. The Pre-Season for 2020 FIA…