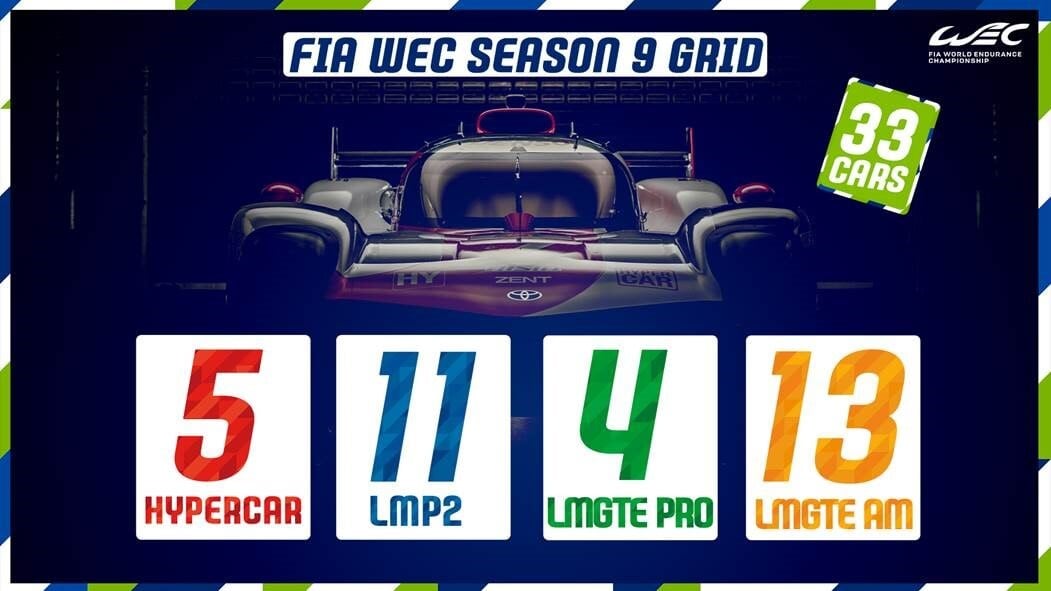 The FIA has published the full, 33-car entry list for the 2021 season of the FIA World Endurance Championship.

2021 will be a season dominated by the massive change at the front of the grid, with the consequences of that trickling down to the rest of the field. It’s the first season of the new Le Mans Hypercar era, which will see the record-setting prototypes vanish — for the most part — and replaced with new, far less expensive vehicles.

The new Hypercar class will see three entries, and they’re a bit of a mixed bag, thanks to the spread of new regulations. Toyota is the only team that retains its top-category entry from the 2019-20 season, with the new GR010 LMH replacing the triple champion TS050 LMP1-H. Not only that, the team will retain the entire driver line-up from last season’s series victory.

Lining up alongside is a car that we’ve actually seen before, but running under a new name. The Signatech Alpine team will campaign in a single Alpine A480, which is actually a rebadged Rebellion R13 LMP1. This car actually won two rounds of WEC last season and finished runner-up at Le Mans, but in order to fit with the Hypercar regulations it faces stiff power and weight penalties compared to 2019-20; its 2’15.8 hyperpole time last year would be 14 seconds faster than projected lap times for the category!

The final full season entry is totally new. Scuderia Cameron Glickenhaus will field two of its SCG007 cars which, like the Toyota, is built to the new LMH regulations. Unlike the Toyota though, it won’t be a hybrid, meaning all 670hp comes from a petrol engine. SCG has confirmed one driver for each car, with platinum driver Ryan Briscoe in the #709 and gold driver Gustavo Menezes joining from Rebellion in the #708.

While fans were also expecting the ByKolles team to join with its new LMH machine, the team is absent from the entry list right now. Quite what this means for the car and team is unclear, but thus far we have only seen renders of the “PMC Project LMH” car while the others vehicles have all seen track testing action.

As the Hypercars would be dramatically slower in 2021, the FIA has also slowed the LMP2 cars down. As well as mandating a spec tire from Goodyear, power of the spec Gibson V8 has fallen from 600hp to 560hp, which should see the LMP2s around ten seconds a lap slower at Le Mans.

GT cars make up 17 of the 33-car field, but the champion Aston Martin team won’t return for GTE Pro. In fact the category will only be a two-team, four-car grid, with AF Corse running two Ferrari 488s and Porsche GT Team running two Porsche 911 RSRs. The category-winning GTE Am AF Corsa Ferrari 488 returns with its winning driver line-up of Emmanuel Collard, Nicklas Nielsen, and Francois Perrodo.

Of course this entry list represents the full season only, with an additional 23 cars due to take part in June’s 24 Hours of Le Mans. Further driver announcements are set to arrive in due course too, and you can see the official list here.

Andrew Evans · Jan 21, 2021· Comments
The most famous 24-hour race in the world is back, for its 90th running, just 10 months on from its last event as it returns to its normal spot on the calendar.

Andrew Evans · Jan 21, 2021· 1 Comment
Only 11 months have passed since the last 24 Hours of Le Mans but, thanks to yet more calendar disruption, the world’s most famous 24-hour race is back — and there’s some major changes.

Andrew Evans · Jan 21, 2021· 12 Comments
Peugeot has revealed its 9X8 Hypercar, which the brand hopes will recapture the 24 Hours of Le Mans trophy and the World Endurance Championship crown when it races in 2022.

Andrew Evans · Jan 21, 2021· Comments
Following on from January’s reveal of the 2021 FIA World Endurance Championship season entry list, the FIA and ACO have announced the full 62-car entry list for the delayed 2021 24 Hours of Le Mans.

Andrew Evans · Jan 21, 2021· Comments
The organizing body of the 24 Hours of Le Mans, the Automobile Club de l’Ouest (ACO), has announced that it is postponing this year’s race by a little over two months.

Andrew Evans · Jan 21, 2021· Comments
After a 50 year absence from top class sportscar racing, Ferrari is set to return as an official entry in the Le Mans Hypercar (LMH) category in 2023.

Andrew Evans · Jan 21, 2021· Comments
The first race in the new Hypercar era of the FIA World Endurance Championship (WEC) will take place in Portugal in April, after the championship’s organizers dropped Sebring from the calendar.

Andrew Evans · Jan 21, 2021· Comments
Toyota has become the first brand to reveal its Le Mans Hypercar in full. Sticking with Toyota’s naming scheme for its World Endurance Championship vehicles, but shaking things up a little to reflect the fresh start for the category, the car is called the GR010 Hybrid.