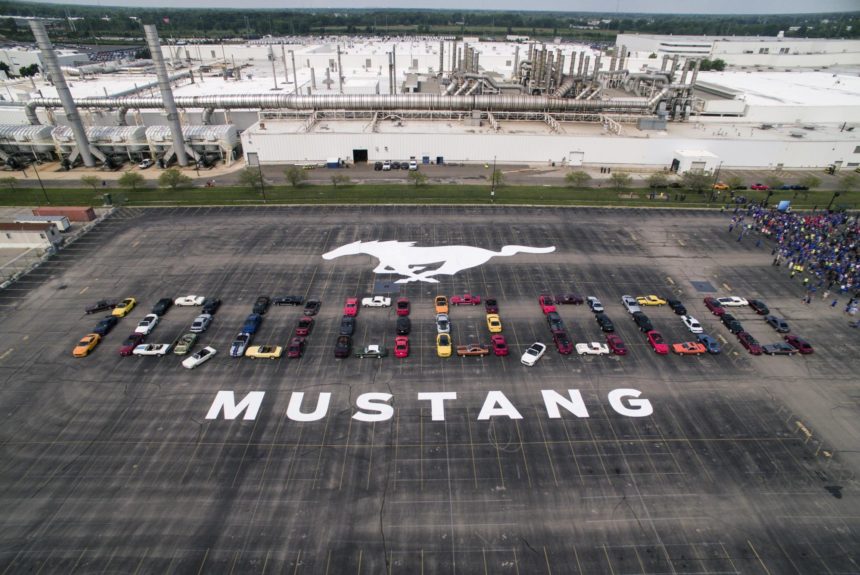 When it comes to iconic cars, you’d have to go a long way to match the Ford Mustang.

It’s been in production for 54 years, in one form or another, and might be the most recognizable car on the planet. The Mustang certainly leaves an impression in the movies, from Bullitt to Need for Speed, and everything between those two extremes of cinema.

As of today, the Mustang name has appeared on ten million cars, and Ford is rightly celebrating. It’s a mark few models ever reach, and they’re generally very earnest or robust vehicles. For a sports car to do it is testament to its enduring appeal.

To celebrate this landmark, Ford gathered more than 60 Mustang owners across all model years of the car, to spell out the number “10,000,000” at Dearborn. The cars covered the whole range of Mustangs, including a limited model SVT Cobra R from the fourth generation, a classic Mustang Mach 1 like the cars that found fame in Gone in 60 Seconds and Diamonds Are Forever, and even a Mustang police car. The book-ending cars of the production run (so far) even provided the commas.

In addition to the traditional spelling-out display, Ford also arranged a parade of Mustangs, driving from Dearborn to Flat Rock. To cap things off there were Mustangs in the sky too — three P-51 Mustang aircraft gave their namesake a flypast.

“Mustang is the heart and soul of this company and a favorite around the world I get the same thrill seeing a Mustang roll down a street in Detroit, London or Beijing that I felt when I bought my first car – a 1966 Mustang coupe that I drove across the country as a teenager. Mustang is a smile-maker in any language.”

FordFord Mustang
11 Comments Discuss this post in our forums...
Can You Beat the Impossible Gran Turismo Quiz?