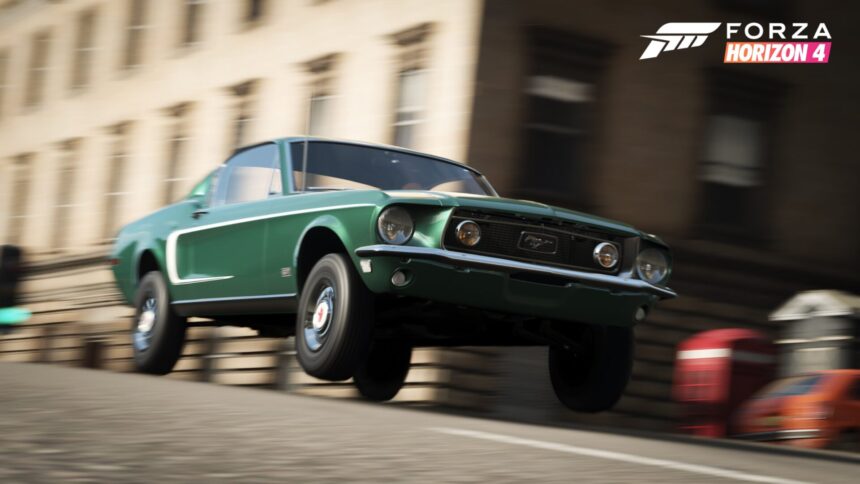 With today’s digital release of ‘Ford v Ferrari’, it seems Microsoft has a little incentive up its sleeve. To celebrate the occasion, those that purchase the film on Microsoft Movies & TV will receive the 1968 Ford Mustang 2+2 Fastback Coupe. Not a real one, of course, rather a digital one for use in Forza Horizon 4.

If the car in question, pictured above, looks familiar, it should. Ford’s pony car originally debuted in the game last February as a part of the Car Pass. The move to give away paid DLC as a freebie might rankle in some quarters, although at $19.99 for the film it’s hardly a gift considering one could simply purchase the Mustang Fastback by itself for $2.69.

Perhaps best known as Steve McQueen’s car in the classic Bullitt, this pony car means business. Moreover, the once lost vehicle headed to the Mecum Auction in Kissimmee, Florida earlier this month. There, the hero car sold for a whopping $3.74m all-in, making it the most valuable Mustang ever.

With a 6.4-liter naturally-aspirated V8 under the hood, it makes do with over 300 horsepower going to the rear wheels. That’s more than enough power to chase down cars around the virtual streets of Britain. As an added bonus, players can recreate the look of the ‘Bullitt’ Mustang through customization efforts.

Ready to get your heart pumping with historical racing action? Buy @FordvFerrari from the Microsoft Store between 1/28-2/10 and receive the iconic 1968 Ford Mustang GT 2+2 Fastback in #ForzaHorizon4. https://t.co/4Kx90Ucr7V pic.twitter.com/YmpjR83Xig

For those that have yet to see ‘Ford v Ferrari’, we heartily recommend it. The film is based on real events, and depicts the late Carroll Shelby and Ken Miles — portrayed by Matt Damon and Christian Bale, respectively — building the revolutionary Ford GT40 to take on the might of Ferrari at Le Mans.

The Mustang is an unusual choice to celebrate the film. Something like the GT40 Prototype, used for a good portion of the film, would be more appropriate. Not only that, it would have been new to the game, and added extra incentive to those that already have the Car Pass, or purchased the 2+2 Fastback by itself.

If this interests you, head on over to the Microsoft Store for more information. You’ll need to act fast, as the offer will only be available until February 10.