Welcome to my GT Planet Gallery.

It's about time you've open up your gallery. It is great to see you stepping up. 👍

Thanks Taiga and Crooooooow the champagne and beer are on the way for the Grand Opening!

Crooooooow, I saw the yellow Lancia Stratos you are using for your banner a while back and it inspired me so much that I had to do one(see above).

This was an interesting edit, I thought I couldn't pull it off. It was easier than other edits because "I couldn't do wrong". No livery to get right or need to fix reflections, match colors, etc. 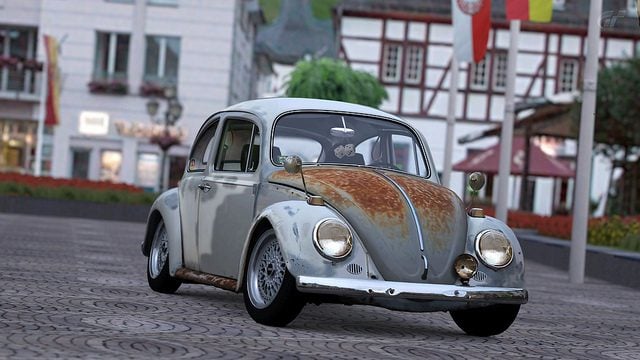 FOR SALE...real cheap. The wheels are worth more than the car. Will accept Paypal. Must have your tetanus shot up-to-date. Buyer must pay shipment to your final destination. The car has never been involved in any criminal activity.​
Last edited: Jul 11, 2013

^Haha, that is awesome. Great editing too. Love the rusty spotlight.

Reminds me of a program we have here called Wheeler dealers where they buy old cars and restore them to sell on, The guy bought an old Porsche 928 and hated the wheels so he part exchanged them for a cheap pair of original ones that were worth about £200, turned out the wheels he didn't want were rare BBS alloys and they were worth thousands and he practically gave them away...they were worth well more than the car cost....D'oh!

Great work Metalsun - like Lee said, I really like the editing on the VDub, and the rusty spotlight is a fantastic detail. Well done. 👍

Thanks leeislee, I watch Wheeler Dealers every now and then, pretty cool show. Now about the spotlight, I thought you and Primus Ortus really liked the fuzzy dice?

The dice are cool too!

After the VW above, I decided to increase the damage, but not to the extreme, yet. A fender bender could be reproduced by crashing the car a bunch of times in-game but I wanted something more challenging. Try that Polyphony! 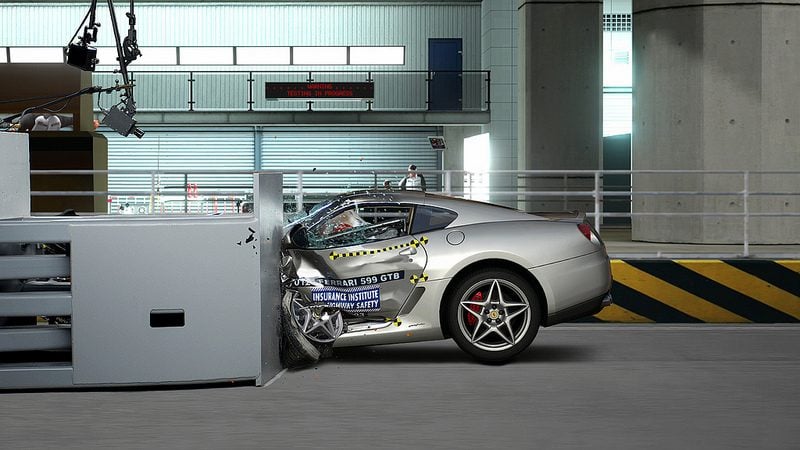 Ferrari 599 06 Special Stage Route X by Metalsun1, on Flickr​
I know, I know, it brought tears to my eyes also. A brand new Ferrari 599 GTB purposely crashed into a wall. Well, this is a necessary evil that car manufacturers must go through to certify their cars as safe in their target markets. In the US the National Highway Traffic Safety Administration (NHTSA) does the certification through the New Car Assessment Program (NCAP). The NCAP formed the basis for certifications in many countries such as Australia (ANCAP), China (C-NCAP), Europe (Euro-NCAP) and Japan (J-NCAP). For marketing reasons, some manufacturers volunteer their cars for testing to the Insurance Institute for Highway Safety (IIHS); good ratings result in more sales. Which brings us to my "victim". Here, the Ferrari is being voluntarily subjected to the small overlap frontal offset crash test. This a more statistically, real-world, test as opposed to the standard frontal crash test.
Last edited: Aug 8, 2018

That looks amazing! How long did it take?!?!

Goonie P
That looks amazing! How long did it take?!?!
Click to expand...

I think I started 4 days ago, working on and off, about 12 hours. I sometimes edit all the way down to the individual pixel.

Fantastic work Metalsun. I don't even know how you did most of that. Just really well done and quite realisitic too. 👍

GPR
Fantastic work Metalsun. I don't even know how you did most of that. Just really well done and quite realisitic too. 👍
Click to expand...

There was the SSRX "lab" shot without the car, I changed de asphalt pavement to concrete and added the striped curb, both from SSRX. I took two shots of the Ferrari, one profile and the other of the front wheel at an angle. The "doner" car was a real crashed Volkswagen CC. I did tons of editing to fit the VW door to the Ferrari trying to make it plausible and photorealistic. I imported everything to the "lab". Worked a lot to color-match the VW/Ferrari door. Later I added the glass/plastic shards, some with "motion blur".

Funny, with every project I learn something new and now I am beginning to feel confident that anything I can think of, I can reproduce it photorealistically.

And thanks a lot for sharing the process to create it. Very interesting to read

My first rally car mod. The initial subject was the Lancia Stratos, but then I decided on the extreme side of rallying, The Dakar. The Mini shot was taken in Laguna Seca. I wanted a lower point of view and a sun position that wasn't there in other tracks. The background is from Toscana, you know, that first big jump. I removed the fence, electrical posts, cables and trees. About 90% of the livery was custom. I later created the dust and added the rocks. 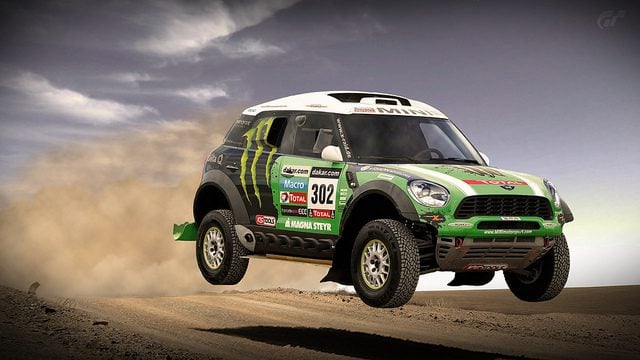 The Dakar, originally known as the Paris to Dakar Rally, is the world's most grueling rally raid type, off-road endurance race. As its previous name hints, the race began in 1978 between the European city of Paris, France and Dakar, Senegal in Africa. Through-out the years, the race course has changed little, but it's most dramatic change came in 2008, where fears of terrorism and driver safety cancelled any racing in the African continent. From 2009 to the present, The Dakar, takes place in the South American continent. In 2013 the race began in Lima, Peru, thru Argentina and finished in Santiago, Chile. This most recent race took place in stages for some 5,200 mi (8,500 km) in 15 days with 4 vehicle categories. This shot depicts the winning entry of the german X-Raid team, driven by Stéphane Peterhansel and co-driver Jean-Paul Cottret . Peterhansel has the record of wins, 11th with this race, his first 6 in Yamaha motorcycles and his 2nd with the Mini.
Last edited: Oct 29, 2013

The appearance of the car and the road are very reallisitic, the edits are very well done. Great work once more 👍

I think the most dramatic change has began with the helicopter crash which killed Thierry Sabine, Daniel Balavoine and three other person in 1986

And I thought the Mini was hard. This was a tough project, a huge amount of livery. Apart from that, it was a straight forward edit, no big tricks. 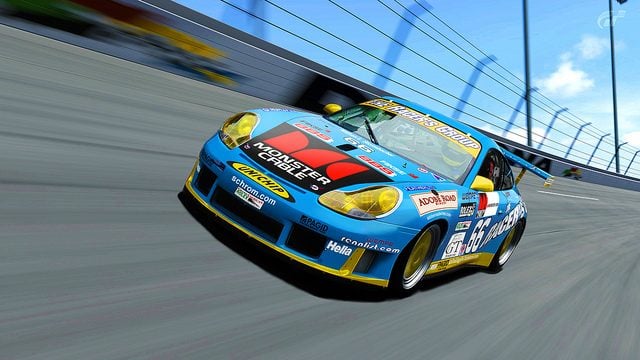 The Racer's Group, a Californian team racing since 1995. The "weapon" at hand is a Porsche 996 GT3 RS. By 2002 the team was noticed enough by Porsche that it gained support from the factory to run in the Rolex 24 at Daytona. In this eighth try, they finally won their class. This shot represents the team's run for the 2003 Rolex 24 at Daytona. Here, drivers Kevin Buckler, Michael Schrom, Timo Bernhard and Jörg Bergmeister not only won their class but they also beat the more powerful prototypes for the overall win.
Last edited: Oct 29, 2013

I'm very impressed by the amount of quality you're able to deliver, Metalsun. You seem to come up with something noone else has thought of before and the implementation of said ideas is flawless. Keep the great photos coming! 👍

Yeah, your photos are very creative (like 599 crash-test, Countryman on Dakar or Bugatti vs. Plane). Each one has also very high quality and details. I like all of them and I also faved 'em some of them on Flickr

Impressive, you truly make superb editings in the photos of your gallery putting fleshes on the commentary about the car, its vehicular or manufacturing backdrops and career in actual race events going on... enough fascinating to appraise the showing of your photoworks with awesome editings alongside hitting up the detailed descriptions of the car on display. it appears to me that you might hit on with something nobody has even struck on doing before.

Superb sense of motion in this last shot and, of course, an awesome edit work as usual with you 👍

Qnrad, YellowBird23, Kodje and all those before, thanks for your inspiring and kind words. This just makes me enjoy my work that much more and motivates me to come up with some "crazy" and new, sometimes historical, visuals.

Always meant to stop by and applaud your creativity. Great work Metalsun

Wouah ! Outstanding editing skills Metalsun, the 599 crash is a masterpiece ! amazingly well done, this is one of the strongest work ever seen. Others are reallt fine too. Bravo 👍

I was thinking in doing a Hot Wheels project for a while but then KING OF SKULLS named it as the 3.0 Comp themes, cool. This was another straight-forward simple edit. The most problematic step was that the engine's red colored accents needed to match the car's color. The trouble was that when working levels, contrasts, brightness, etc., it also changed the characteristics of the chrome. My solution was to create another top layer of the engine and erase the chrome and other metal parts. This separated the red color from the chrome, giving me all the freedom to match the colors. 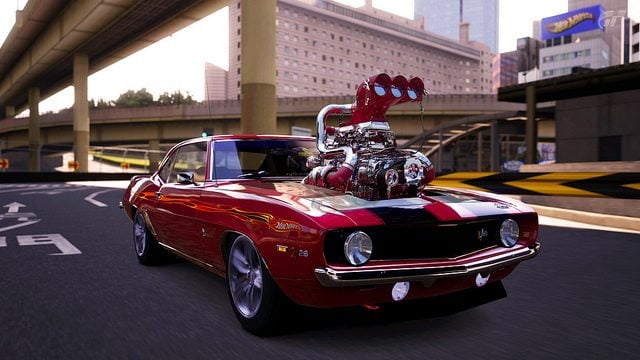 Hot Wheels Chevrolet Camaro Z28 69 Tokyo R246 by Metalsun1, on Flickr​
You better have a good insurance plan! This twin-turbo, super-charged, mechanical monstrosity might just blow-up in your face and if that doesn't kill you, well, hitting on the brakes will certainly flip you over. YOU HAVE BEEN WARNED!
Last edited: Aug 18, 2013

Also finding an engine that is at the same angle as the car is also tricky!!
Great edit!👍