I really hope SMS will clarify this announcment and show us more "sim" side of this game... I really hope..

02civic
i get what you're saying, and arcade-ish style games can be fun.

but, like, the spoilers were popping off of the cars in the trailer? why? that's such a change of direction from PC2... and it just seems like they failed to prep their audience for such a drastic change and that it's going to end up biting them in the ass bc nobody was ready for this game. plus, it's so similar to GRID, which was a huge disappointment. so why do it again?
Click to expand...

I agree wit you.
Does Codemaster want to lose money? Haven't they learned their lessons with the GRID series... making PC3 to be GRID 3 would be another huge mistake!


Eunos_Cosmo
I quite liked the NFS Shift games, so I might be into this. Why do cars in the gameplay video appear that they don't have any dampers? Did cars bounce around like this in PCARS 1 & 2? I never played them.
Click to expand...

Never played NFS Shift, but between what NFS was in the early 2000 and what it is now, i have never liked any of them..
i gave EA several chances, and each time they have failed me...
... i guess i dont have the same taste in Car game as the majority of players out there...

Kaz and his PD team have been spoiling me with GT games for far too long, i am in in the GT camp for now, best balance of all the worlds...
prove me wrong SMS.

why not hold it back and make it a PS5 Launch game? 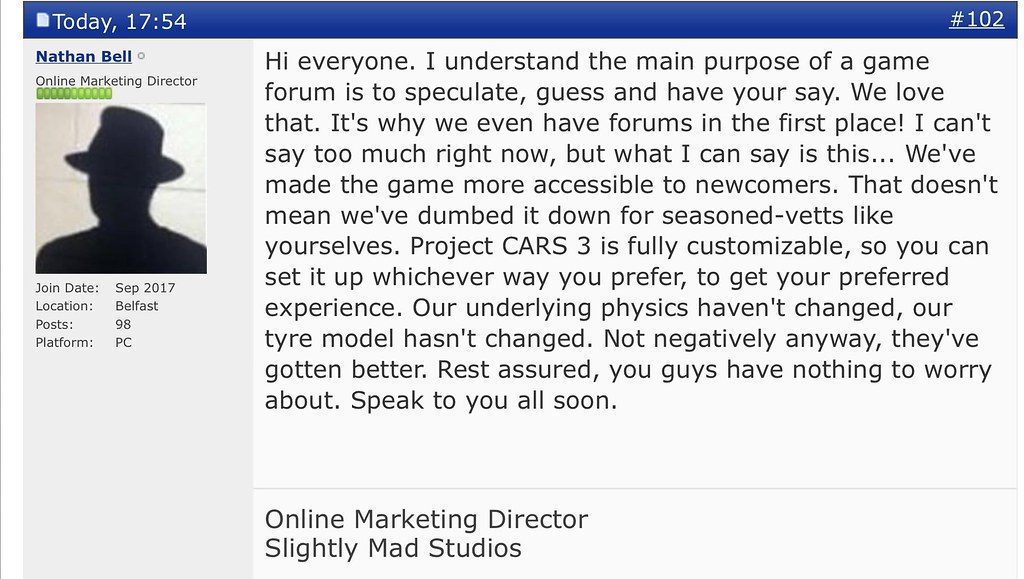 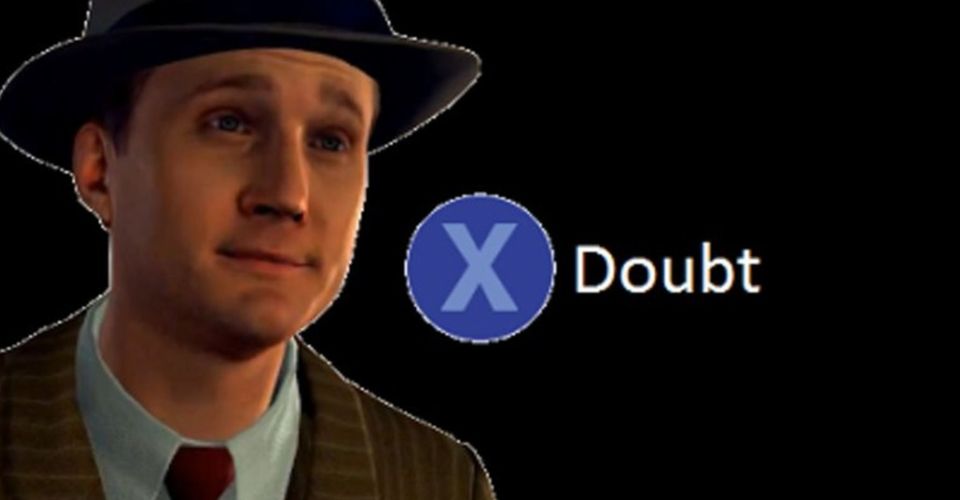 Ok... One thing needs to be made clear... Stop hating codemasters if you feel disappointed with this game. Ian Bell was saying it will be something like Shift WAAAAAAAAAAY before Codemasters acquired SMS. So no... This is no codemasters influence.

On the other hand. We need to see more of this game. Maybe only this trailer was made to appeal to wider audience? Maybe they really nailed the game with both arcade style racing and option to made it more simulation? We just need to see more of it.

Lol yeah, ..reminds me i should go back finish that game, was cool detective work.

Looks really disappointing - very similar to the latest Grid imo. Im not that bothered as il hopefully be balls deep in ACC and F12020 this summer. I just hope they sort this Touring Car license for the next gen.

Hmm.
Not sure what to make of this, we'll see.

Improve the physics and ffb.

Im so annoyed by their change in course.

Improve the physics and ffb.

Im so annoyed by their change in course.
Click to expand...

Exactly!
Visual gimmick to make you feel like you are racing are just that, gimmick !

If I wanted such a thing, I would be playing Burnout Paradise...

Please prove to us that pCARS still means something.


raven214
I am completely caught off guard by this... And completely disappointed by the footage. I love PCars2 even though I have a ton of unfinished business with it. I don't want sim-cade. This looks like arcade crap and what is with the sound? Is it just me - I can barely hear the cars. Mostly what I hear is a flat ambient track/scenery background sound that makes the racing feel very oddly distant and removed.

I was not expecting anything PCars3 related until next year and only next gen/PC. Either the current gen versions will be incredibly dumbed down or, as I fear will be the case, the whole game will be simplified so they can improve graphics and "chase the middle" with arcade gameplay.

The only redeeming value I see is the Corvette C8, but at this point I'll probably just pick up the next Forza Motorsport (as I assume it will be there) for that fix.
Click to expand...

The videos we saw so far are going against what we want here...

PCARS was aimed at us first.
Clearly SMS is now aiming at a different crowd, the Michael Bay movies fans, easily impressed as soon as they see sounds and flash like at the club...

I understand SMS needs to make money as much as possible, and I have nothing against that.

It's ok that they attract new players...
But please do not alienate the people you first wanted to cater to...

That would be a slap on the face...

Just watched the trailer and the GameRiot gameplay video. I think this looks like it could be a very fun game.

While I vehemently disliked Shift 1, Shift 2 was a ton of fun for me, and had a solid amount of content and variety. If PC3 is a truly a spiritual successor to Shift 2, the I will be excitedly cautious. More than anything, I hope it's composed, and somewhat competitive with a gamepad. PC2 was a major step-up from PC1 in terms of gamepad control, but even PC2 could be really hit or miss. I was often annoyed as to how often I would lose grip and felt like I got no feedback at all that my car was losing control.

I don't get why some of you say it looks like a Codies game, though. Codemasters, even with their more serious games, have a very distinct style and overall feel to them. Looking at the graphics, the aesthetic, the sense of speed, and even how the cars move and jostle on the track (which does have me slightly concerned), I personally see no Codemasters influence present.

Frankly, the only thing I didn't care for in the gameplay video was the music, but that's what Spotify is for.

I kinda like how the cars behave even if its arcade,too often in arcade racing games the cars are glued so much to the ground that they look like they are on rails.
In pc3 the cars bounce a little when taking corners and in cockpit view the driver hands struggle to turn the wheel,its a small detail that wont affect much of the gameplay but helps alot with immersion.
I also like how there arent cliche effects like huge amounts of screen shaking when going too fast and sudden motion blur.
They should get rid of the camera shake when changing gears tho,its unnecessary.

I just want to know if Driveclub's sound files will be used or not. That's what will define whether I buy it or not. In the gameplay video, the AMG GT3 unfortunately still has the sound from PC1.

I'm honestly not seeing where people got GRID out of this. Shift definitely, but GRID?

Sage Ages
I'm honestly not seeing where people got GRID out of this. Shift definitely, but GRID?
Click to expand...

I mean GRID and Shift are pretty much the same concept. "Professional racing" that you'd typically see in a simulation game but with an arcade twist. If you take away physics and visuals and look at the core idea both franchises are essentially the same thing.

Alpine GT4 would be an instabuy but meh I’ll wait for a massive discount sale.

Anyone notice the pit lane is blocked in the video, so guessing pit stops are gone

The HUD is awful and more worrying is the line from an interview about online races " And if you don't have a suitable car in your personal garage for an online event, you can borrow one to take part" So you will be given a basic car with no options, but that means we will be now buying and modding/upgrading cars like Forza to try an compete online why????????

So mad at this. I totally love that they are trying to bring new users but forcing us to grind for XP and 'buy and mod' cars? sorry, its a racing game I want race cars not road cars to 'upgrade'

Funny with regards to above comment, I want the best of both worlds IMHO. City cars to mod and max out and works convert like Shift 2 and also race going cars ready to go out the box, more options the better.

So onto the gameplay so far. Well...that looks like the newer GRID100%. Looks and feels nothing like Shift 2: Unleashed, which was awesome. This seems to behave very arcadey and floaty. Why do all the cars look like go-karts? They zoom around and speed up and brake and slow down really quickly, they dart jarringly from left to right, the motion blur and speed effects seems to no match the action properly and why more of this"hit the sparkly target 1/10s!" mechanics? Just...no. As for car selection, i know we don't know 100% yet but if it's anything like Pcars 2 i'll pass. Needs more everyday city cars you can transform into works converted track monsters like in Shift 2. If it's all going to be sports cars and super cars it'll feel really dull to me. Will wait and see.
D

PSN:And-War
why not hold it back and make it a PS5 Launch game?
Click to expand...

I guess because there will be a tiny user base for a long time after launch and race sims are a niche game genre as it is.

The disappointing thing for me is that, since racing games have become more and more niche over the past decade, quality arcade racers that actually stand out have become a rarity. If PC3 does indeed take a hard pivot toward arcade physics, not only will it be unable to differentiate itself from other games on the arcade-end of the spectrum, but the sudden change for an otherwise realistic sim, without a change in branding to indicate as such, will only confuse people. Project Cars 1 and 2 were far from perfect, but they stood out as sim racers, especially on consoles. I'm not optimistic they can stand out as arcade racers.

And here's why that's disappointing; one genre in arcade racers that's completely underutilized is open-world. Forza Horizon is the only consistently good open world racing series. I'm not interested in any more circuit racers that try to appeal to both sim and arcade fans. I would be very excited if this were an open-world Horizon-style spinoff. I would have quite a bit of confidence SMS and Codemasters could pull off something compelling in that area. And given that I only own a PS4 and a Switch, my only option remaining is... sigh, The Crew 2.

Welp, no open-world racing for me anytime soon.

There's a smell of "Shift" in the air and i can only think of one thing:

So Mercedes AMG GT3 rear wings just fall off and tumble across the ground. Nifty beans that is right there. The realism is smacking me in the chops as we speak.

I mean its okay to have simcade PCars as long as it's not inherited the mainline numbering. Name it as a spinoff like PCars: Revolution or something. DiRT does that albeit in reverse.

Another big racing game hitting ps4, acc and this game will do damage to GT sport,

Are people really surprised that the game is more like Shift despite the fact that Ian Bell mentioned it a million times before?