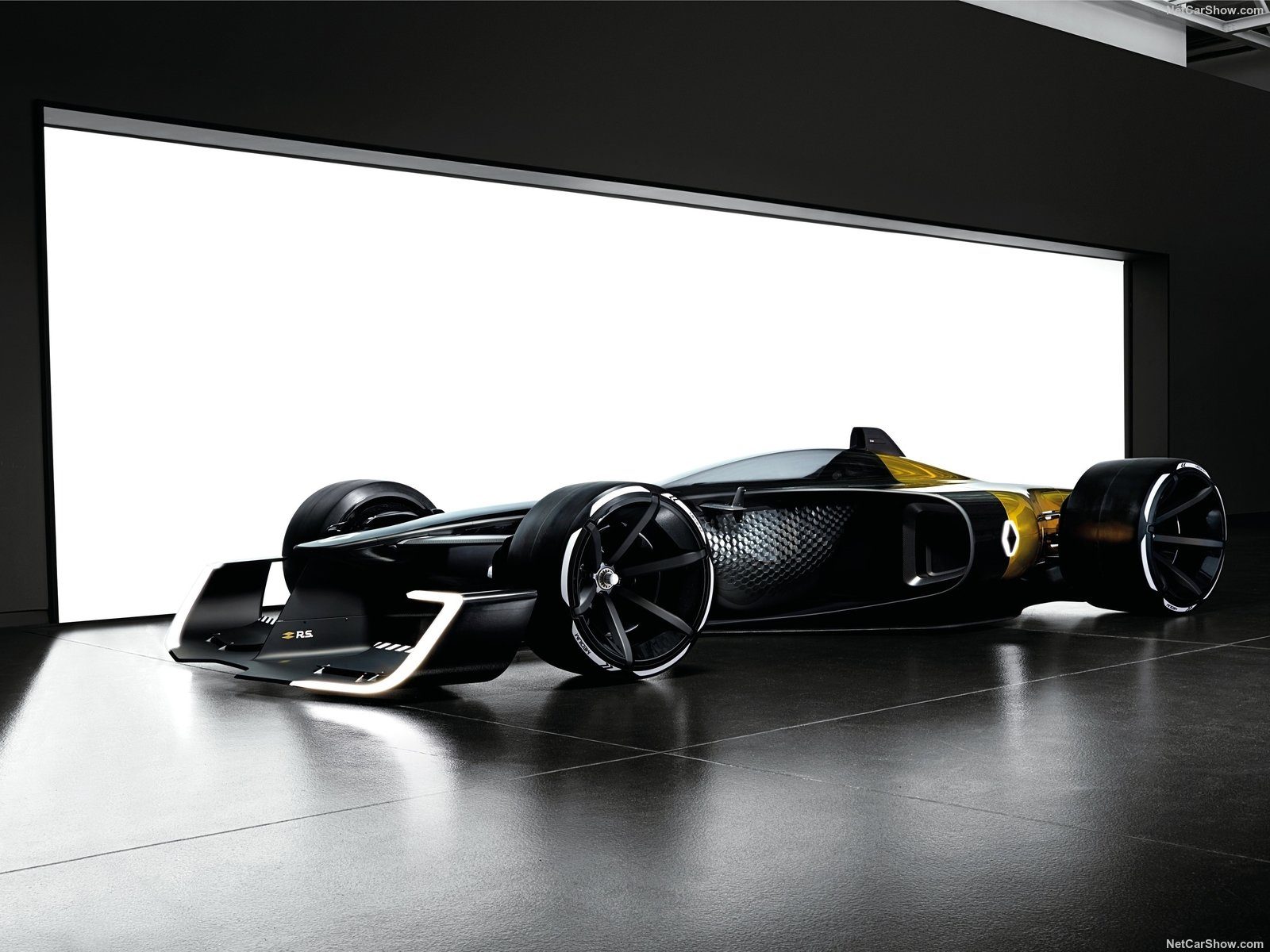 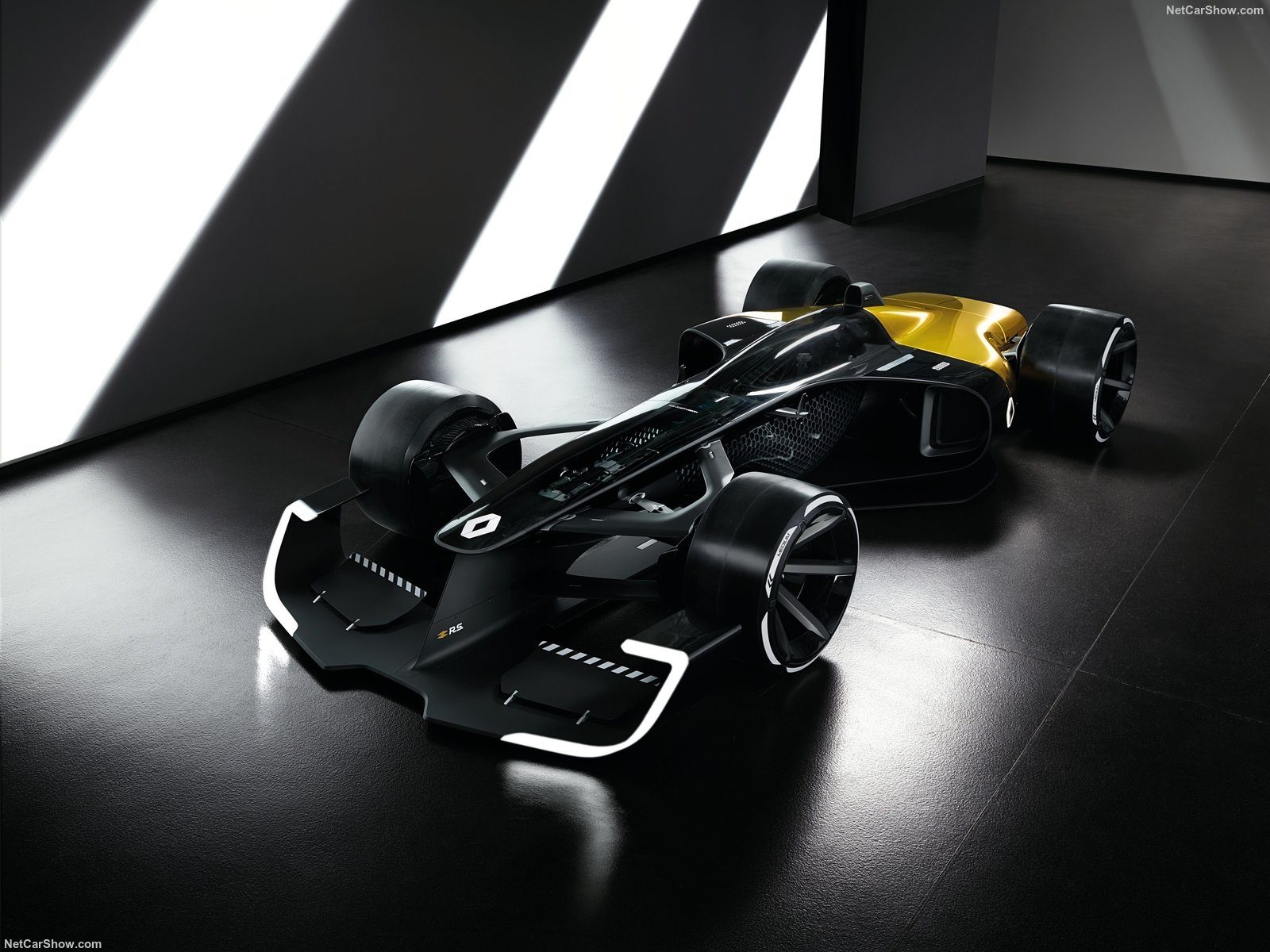 Renault's vision of Formula 1, ten years from now, places people at the centre -one of Renault's core values- as a vital cornerstone of F1 experience. Propelled by a high-powered engine, the driver can showcase qualities as a top athlete for the pleasure of fans. More attractive, Formula 1 also becomes safer, to better protect participants, and takes more active responsibility towards the environment.

The year is 2027. At every Grand Prix, the competition is fierce. With a weight / power ratio never before reached in the history of Formula 1 (1 megawatt on the whole for a weight limited to 600 kilos), human performance is at the heart of the sport. 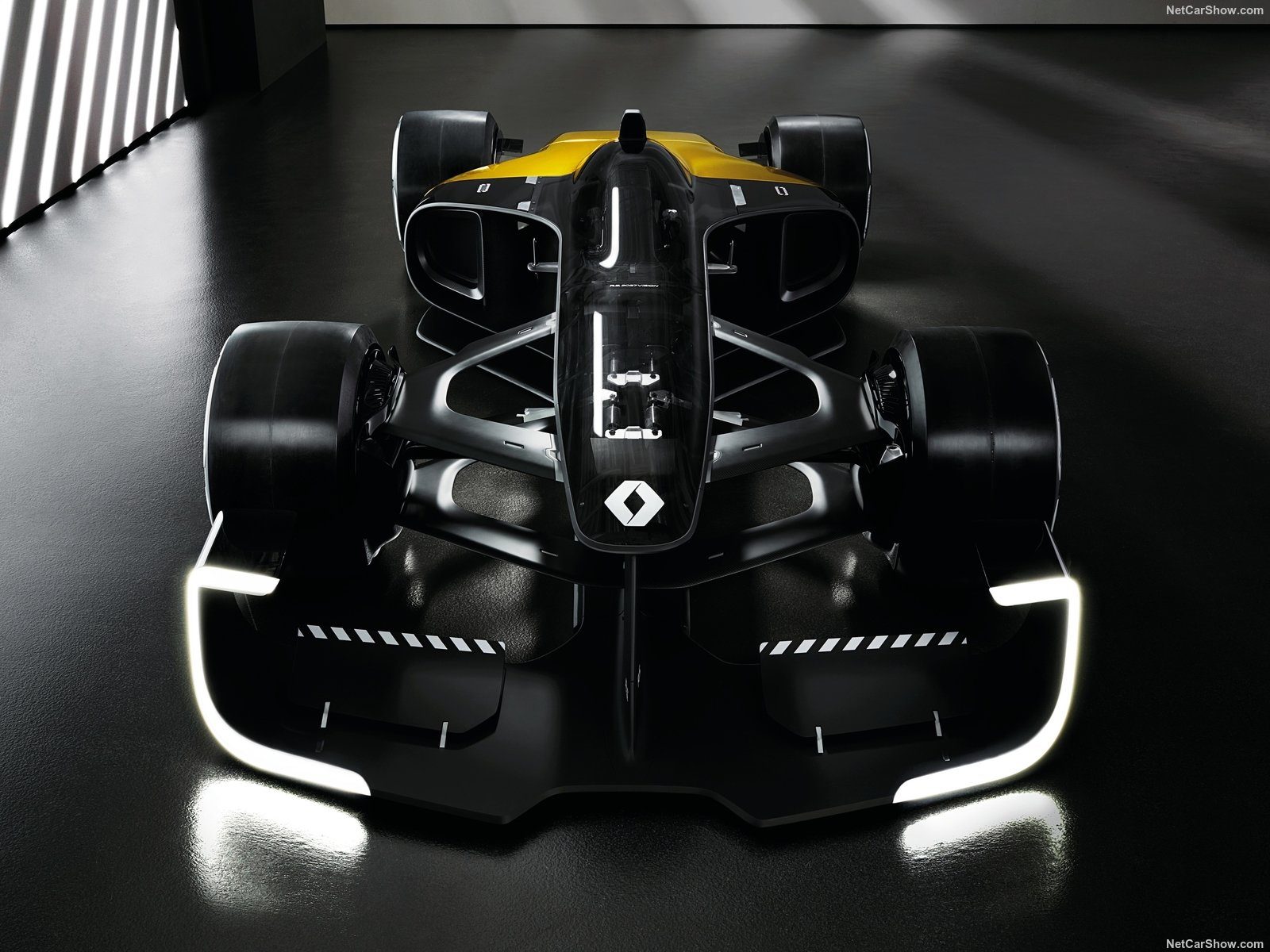 To make Formula 1 more captivating, fans benefit from a closer connection to the driver, whether they are watching trackside or on television.

• Thanks to its transparent cockpit, the R.S. 2027 Vision concept provides the best-ever view of the driver at work. This resistant, lightweight shell is 3D-printed, with forms tailored to the driver's body, mirroring how the design of Renault's road-going models is directly inspired by the human body.
• The helmet is also transparent, enabling fans to see the driver's face and expressions.
• Active LED lighting incorporated into the wheels displays a range of information, including the driver's position and the car's remaining energy reserves, making it easier for spectators and television viewers alike to understand how the race unfolds.
• The digital display in the centre of the steering wheel informs the driver of his 'fan ranking' position, which is determined by spectators' interaction on social media, rewarding the most deserving driver on the track with an additional boost of power in the last laps.
• Some of the driver's telemetry data is accessible to fans via the Internet, enhancing their overall understanding of the race and the strategy. This data also allows connected players to participate real-time in the race and compete against their heroes. 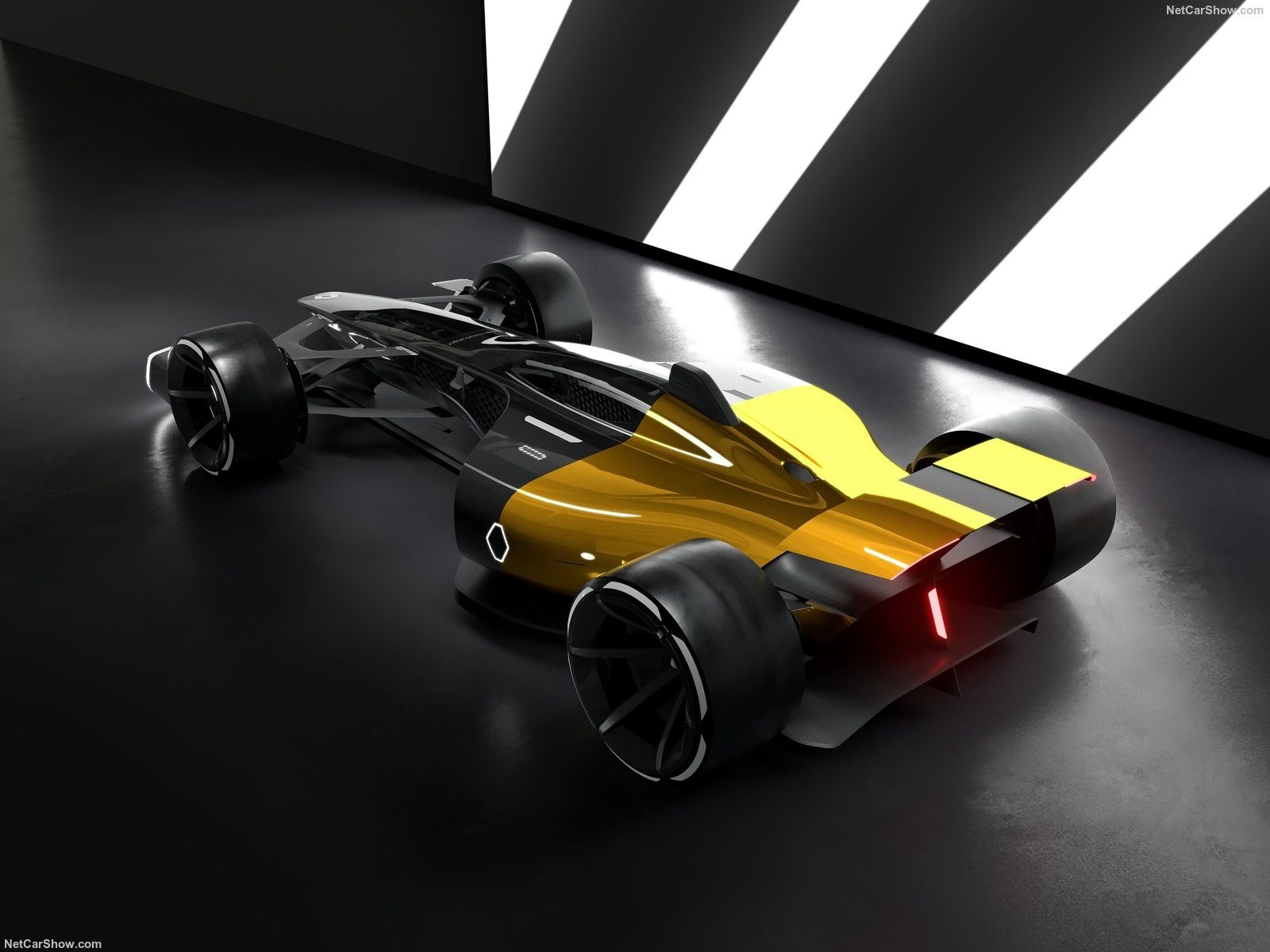 In terms of design, Formula 1 evolves to become equally appealing to racing enthusiasts while it attracts new fans.

• The cars are instantly recognisable as F1 single-seaters, with their long, slender nose, side pods and four open wheels. Their design is both finely-honed and more aggressive.
• In addition to the roles they play in optimising performance and energy efficiency, the combination of mobile aerodynamic features and active lighting systems make the cars more 'communicative' for spectators and television viewers.
• In the case of the R.S. 2027 Vision, bold features like the C-shaped LED front lights and the illuminated Renault diamond on the engine cover provide a visual tie between the racing car and Renault's road-going models.
• To make the show even more captivating for spectators, the colour emitted by these lights switches from a white to a blue hue when the electric mode is activated. 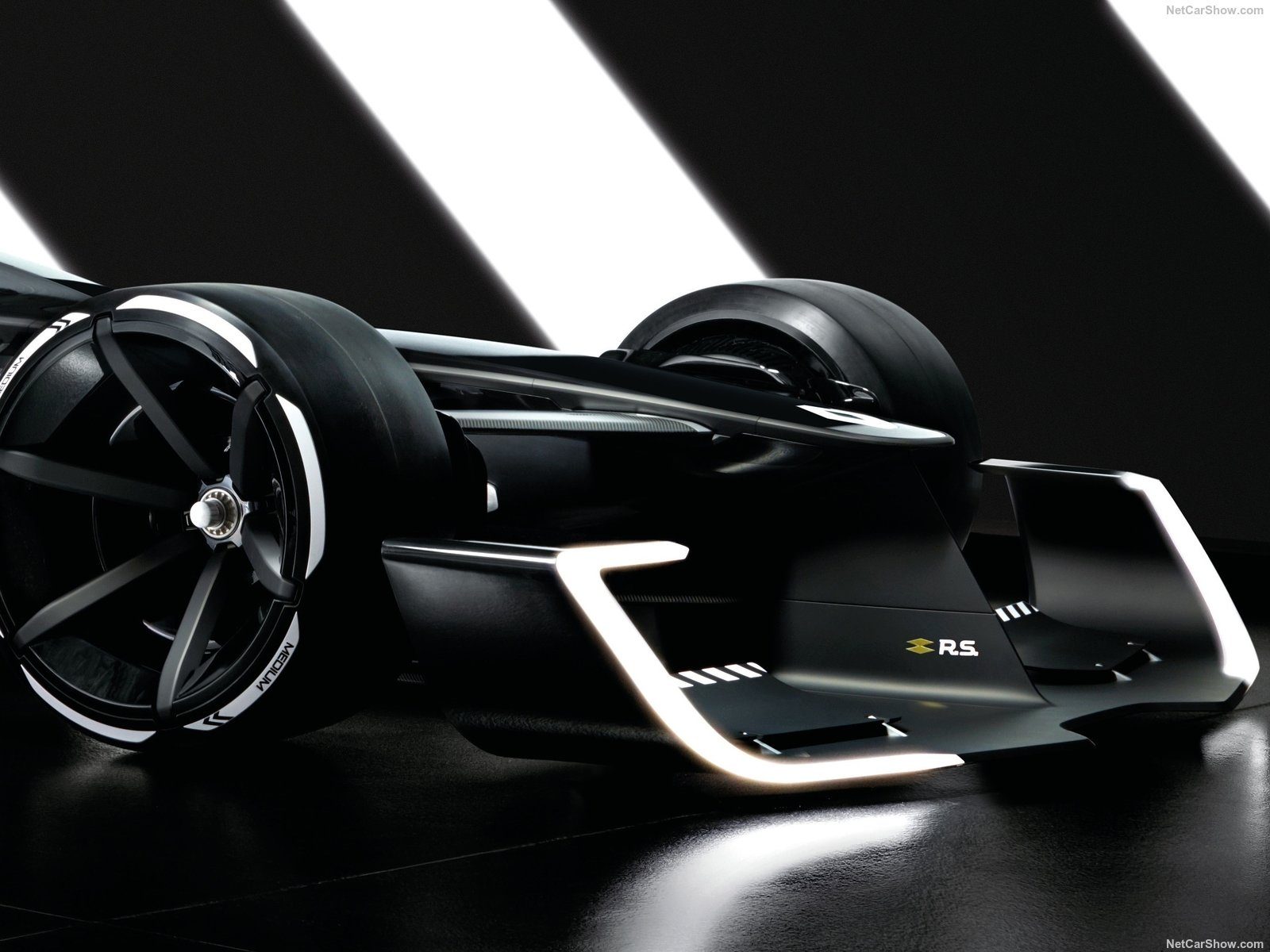 Safety, always one of Groupe Renault's chief objectives, naturally remains a priority in Formula 1 in 2027. Numerous decisions have been taken to make the discipline even safer for all involved, notably the drivers.

• The F1 cars incorporate autonomous driving functions. This delegation of driving duties is automatically activated in the situation of race incidents (safety car, virtual safety car, yellow flags, etc.). In this situation, the mandatory single-file running and accompanying restrictions (ban on overtaking, speed limits, etc.) are managed entirely by the car, minimising the risk of further accidents and ensuring the safety of competitors and track marshals alike.
• The car's closed cockpit protects the driver from flying debris and other dangerous objects that have the potential to strike with force. This aerodynamic canopy has been produced in polycarbonate, which is ultra- resistant to impact and flames.
• It is framed by two titanium 'pop-up' roll-over bars that emerge from their unobtrusive location in milliseconds should the car overturn, providing the driver -still strapped into the seat- with an essential gap between the cockpit and the ground from which to escape.
• These two features were both specifically designed to allow the driver to be able to extract himself from his car in the event of an accident in which their car overturns, and not to hamper the efforts of rescue teams if required. 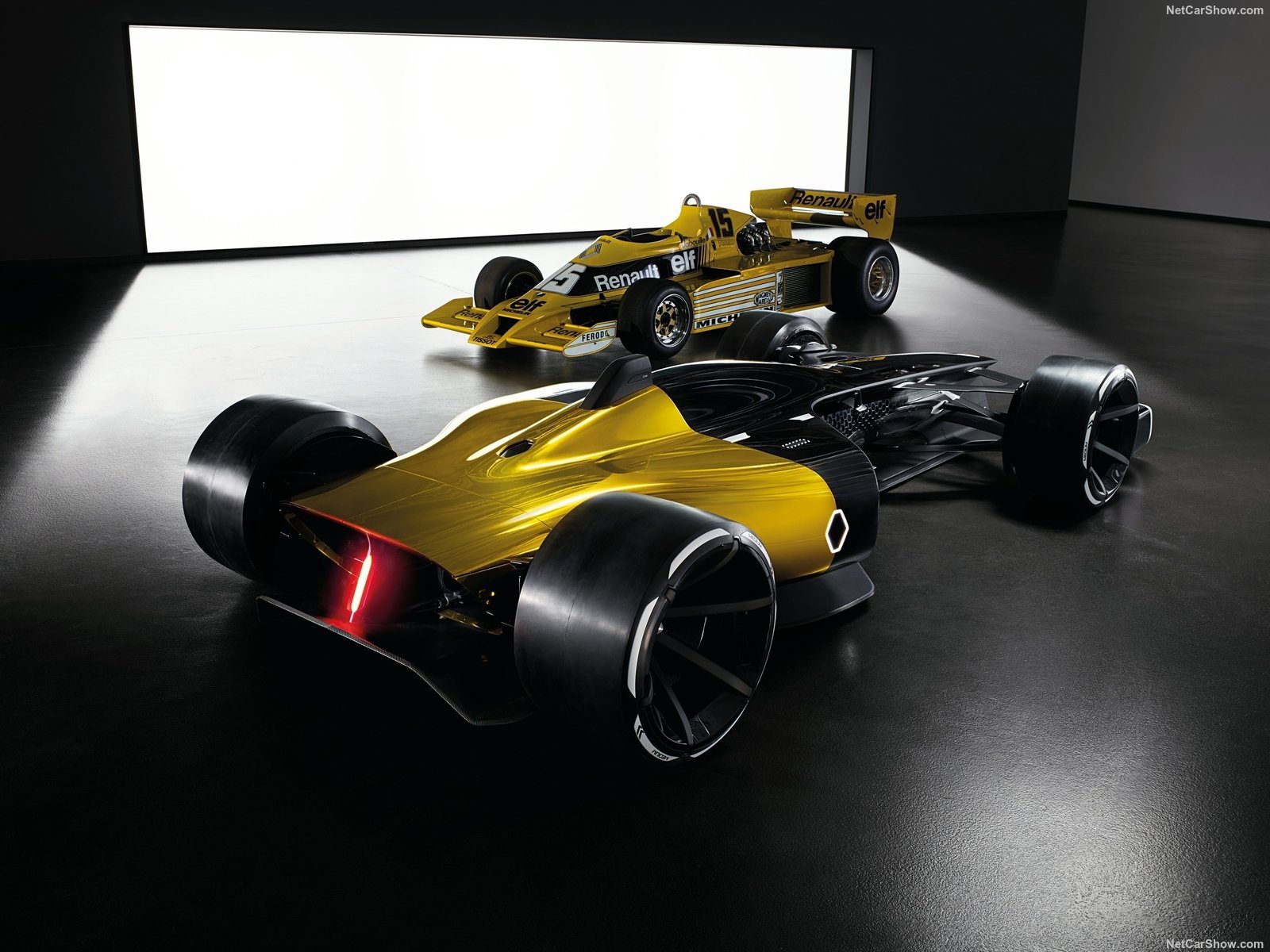 Safety is similarly ensured by the ultra-connected nature of these Formula 1 cars -increasingly common features across Renault's passenger car range. These functions exchange information based on what is happening in the race, seamlessly.

• Vehicle-to-vehicle (V2V) communication with the other cars in the race, so that every driver knows exactly where each of their competitors is on the track or in the pit-lane. This feeds information to the pit lane's predictive collision warning system, preventing teams from releasing a driver while another car is passing by at speed.
• Vehicle-to-Everything (V2X) communication with peripheral systems on the steering wheel's digital screen, including the immediate display of instructions given by the race director, such as yellow or blue flags. A direct link is established with the marshals in the section of the track where each car is running. 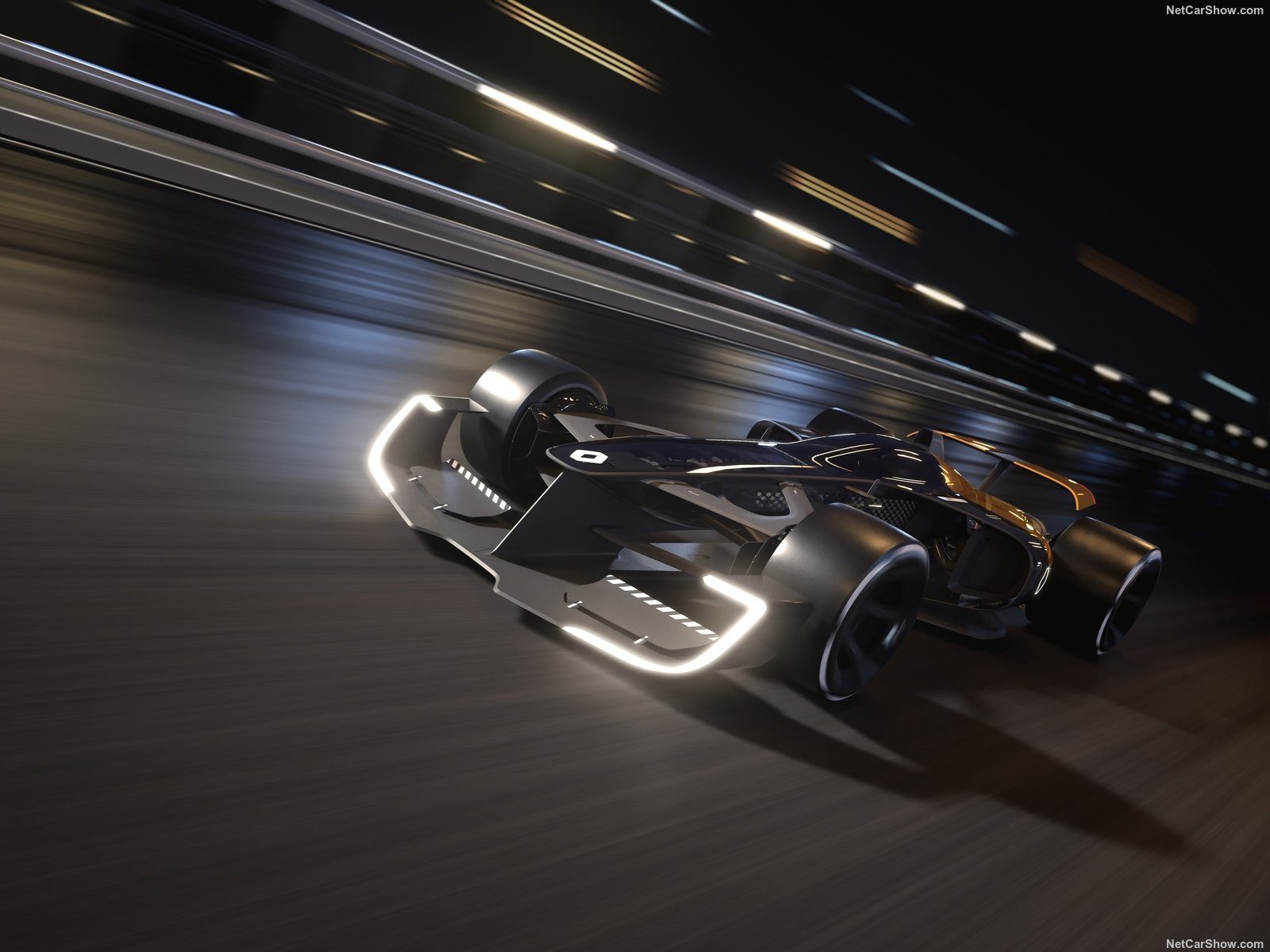 • Designing the individual parts of a Formula 1 car now requires less time and tooling thanks to increasing use of 3D-printing. This benefits the R.S. 2027 Vision concept as it previously benefited TREZOR, the Renault concept car unveiled at the 2016 Paris Motor Show that formally launched the brand's new design cycle.
• The new materials used by 3D printers to produce parts are more recycling-friendly than many composite materials they replace.

These decisions serve to make the cars both safer and cleaner, without detracting from the spirit of single- seater racing. 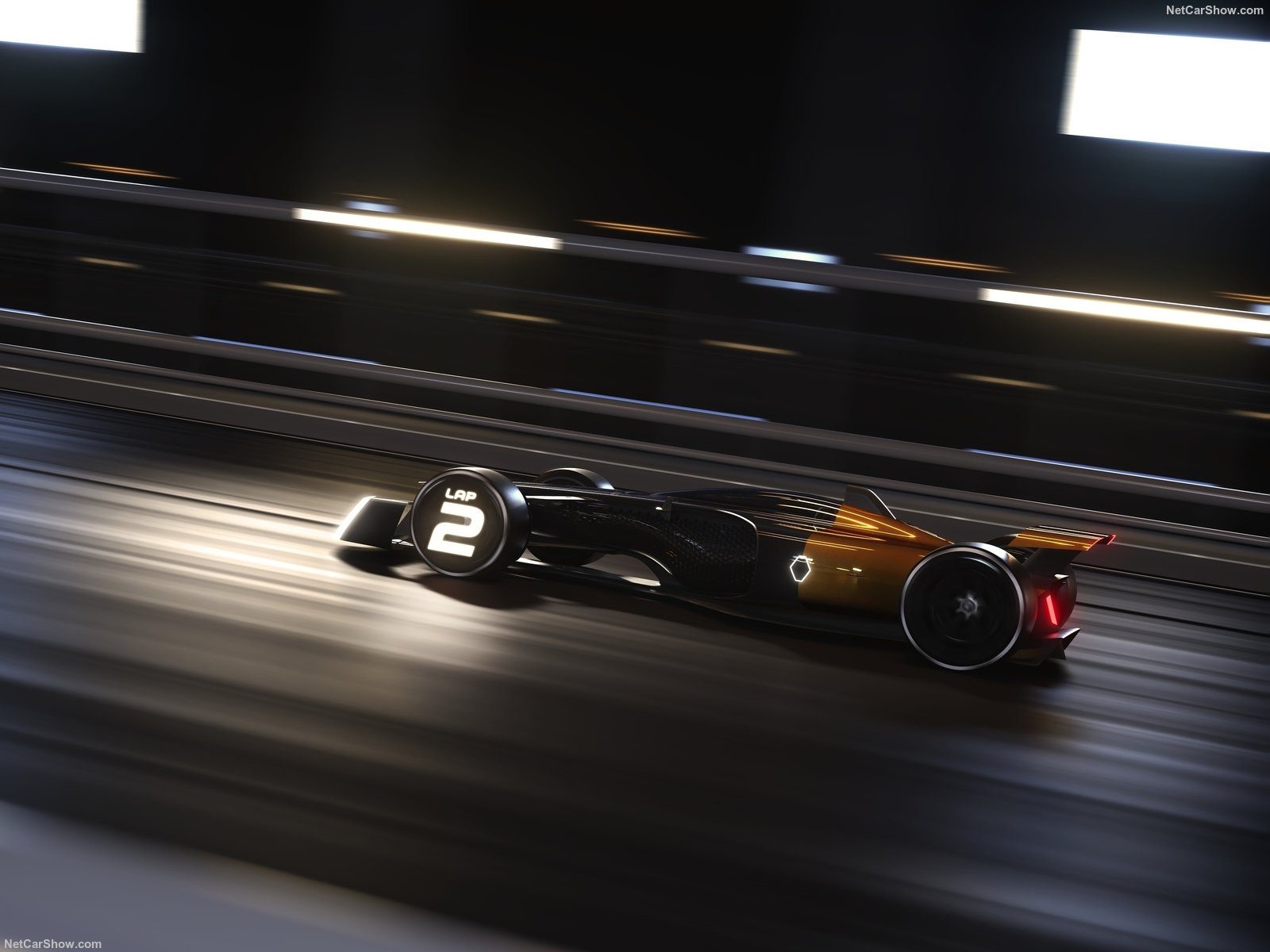 To put the human factor back on centre stage, Renault's vision for Formula 1 in 2027 also covers the technical side. In addition to delivering higher performance, cars have taken advantage of the new electrification technologies to become even more efficient. Consequently, they contribute to making Formula 1 a continued test ground for passenger vehicles while helping the race industry follow a responsible approach to costs. 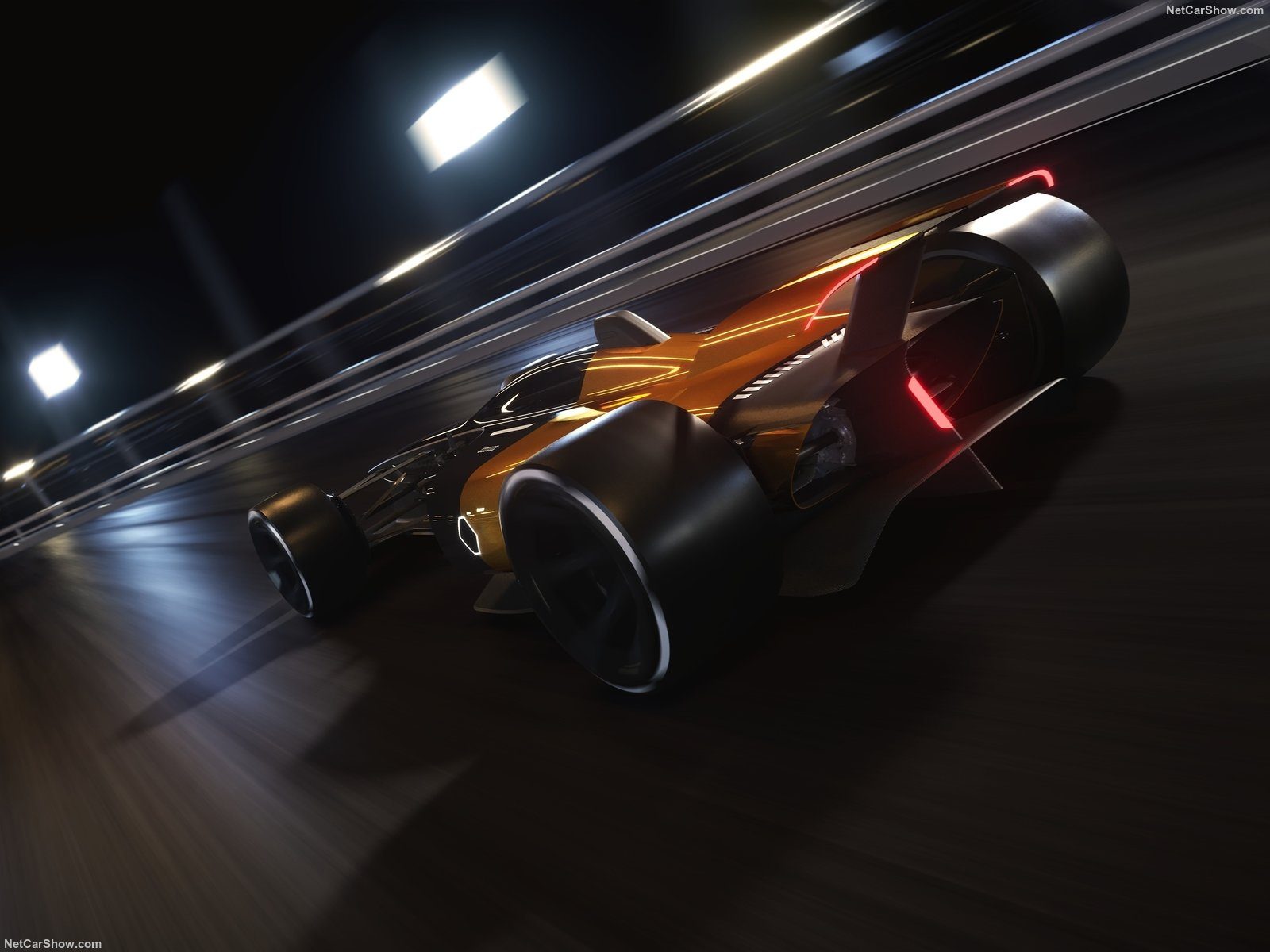 Maintaining its role as a platform for Renault's advanced technology, Formula 1 in 2027 drives innovation efforts towards higher engine and aerodynamic efficiency.

• The total amount of power is 1 megawatt and the weight limited to 600 kilos.
• The level of power generated by the Kinetic Energy Recovery System is now fixed at 500kW (compared with 120kW in 2017) courtesy of two ERS-K units, one at the front and one at the rear.
• This four-wheel drive configuration delivers unprecedented traction for a single-seater racing car.
• The car's very high-energy density batteries, two times the current F1 batteries -a field of intensive research for Renault's electric vehicles - are connected to an ultra-high-performance dual-energy recovery system. Thanks to two 250kW electric motors (one at the front, one at the rear), the bulk of the energy otherwise wasted under braking can be recovered and stored for later use during the same lap.
• To minimise energy waste due to drag at high speeds without detracting from slow-speed stability, the car's aerodynamics are now active. Their efficiency is further enhanced by active suspension that optimises handling under the exclusive control of the driver.
• In addition to facilitating pit-lane manoeuvres, four-wheel steering makes the cars agile and responsive. 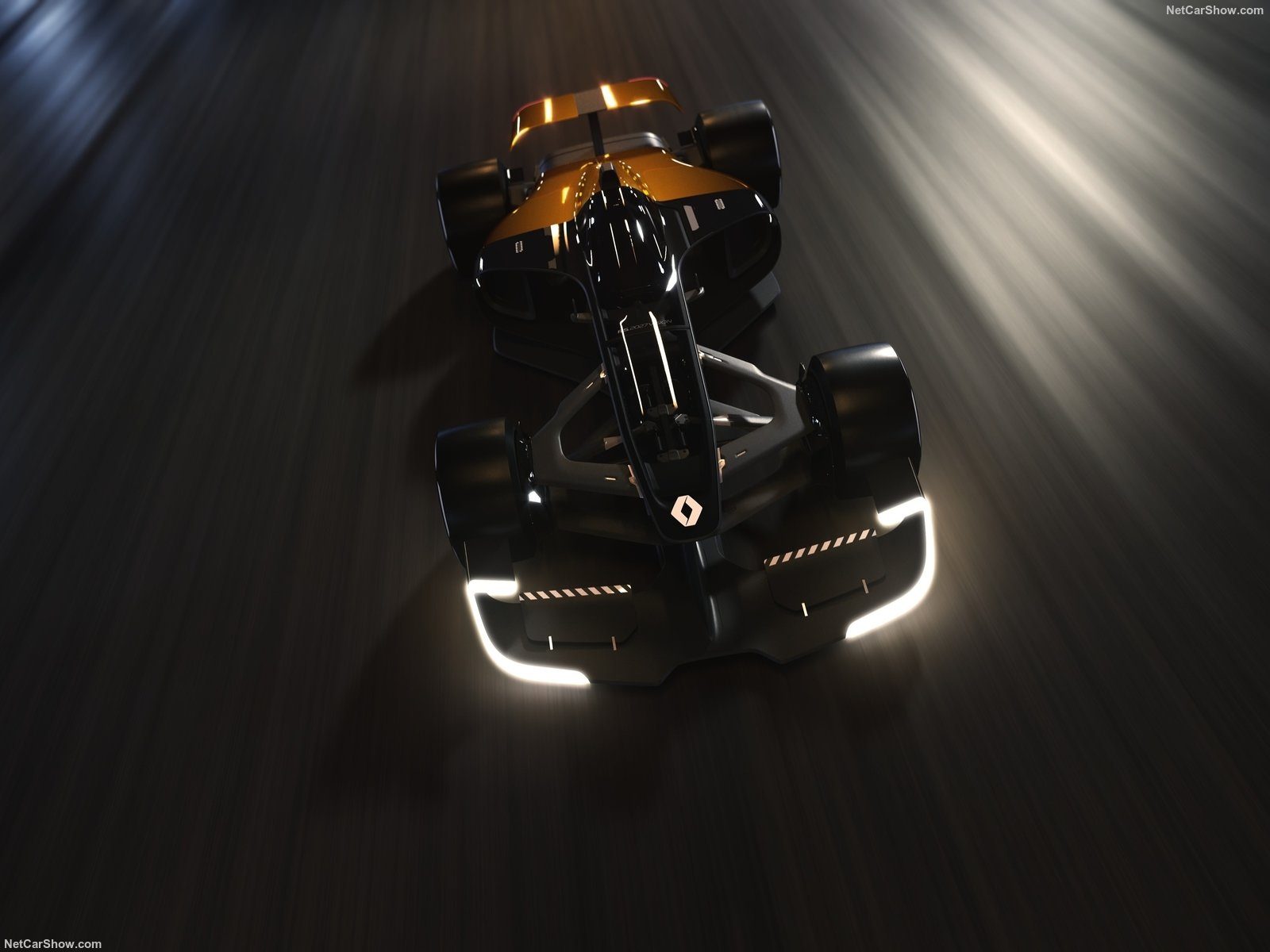 Many of these innovations enrich Renault's technology know-how, some of which are already available in its current range of passenger vehicles, for example, Renault's MULTI-SENSE system with active damping and the high-energy density batteries of Renault ZOE Z.E. 40.

• F1 hybrid power plants based on a V6 combustion engine incorporating downsizing technologies such as turbocharging and multipoint fuel injection, a configuration that maximises power output while curbing fuel consumption and volume.
• The capacity of the fuel tank is just 60kg (compared with 105kg in F1 today), which is the quantity necessary for the shorter, more exciting race formats.
• Meanwhile, high energy-capacity batteries, two times the current F1 batteries energy density -a similar level to the Formula E batteries that will be used in Season 5-, are used to power the two 250kW electric motors in a sustainable way. They also allow the car to be driven in all-electric mode to save fuel during certain moments of the race, such as the formation lap and entering and exiting the pits. 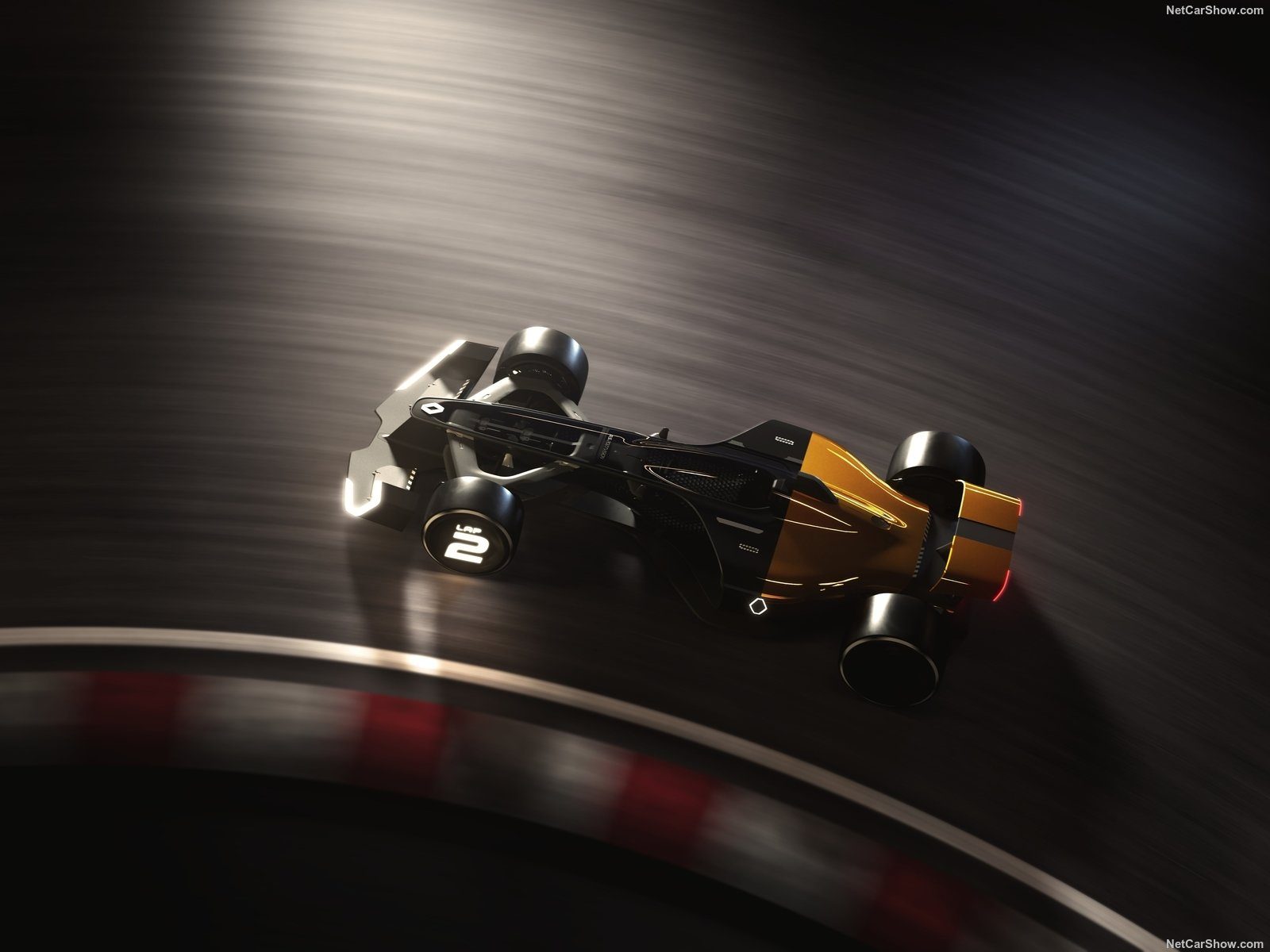 Renault's vision of Formula 1 in 2027 also advocates for a responsible approach to costs. By capping expenditures, the discipline can attract more manufacturers and teams for a long-term commitment.

• To achieve this, F1 benefits from standard elements, thereby reducing the economic pressure on the teams: all non-performance-differentiating components are provided by a single supplier selected by the FIA.
• Restricting development work on the cars' aerodynamics brings wind tunnel and parts production's budgets down, too. Only the front and rear wings, engine cover, floor and diffuser can be remodelled, and only three configurations are authorised during a single season.
• Finally, F1 takes note of more accessible technologies and recovers with a certain pragmatism. For example, ultra-complex hydraulic suspensions give way to simpler active suspensions, but which could recover the otherwise lost energy. 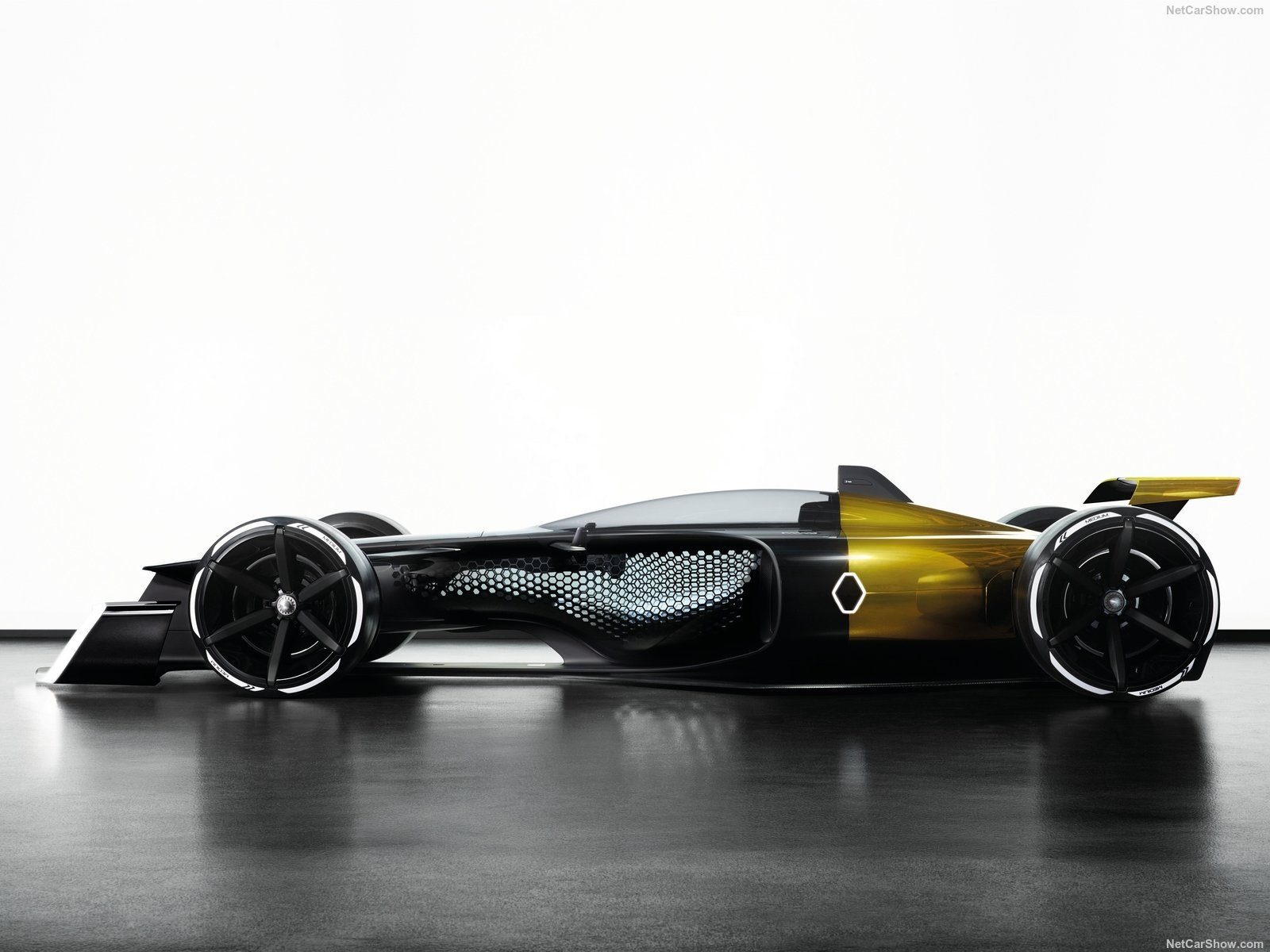 A financially level playing field injects an extra element of excitement into the season, granting all teams an equal opportunity to compete. 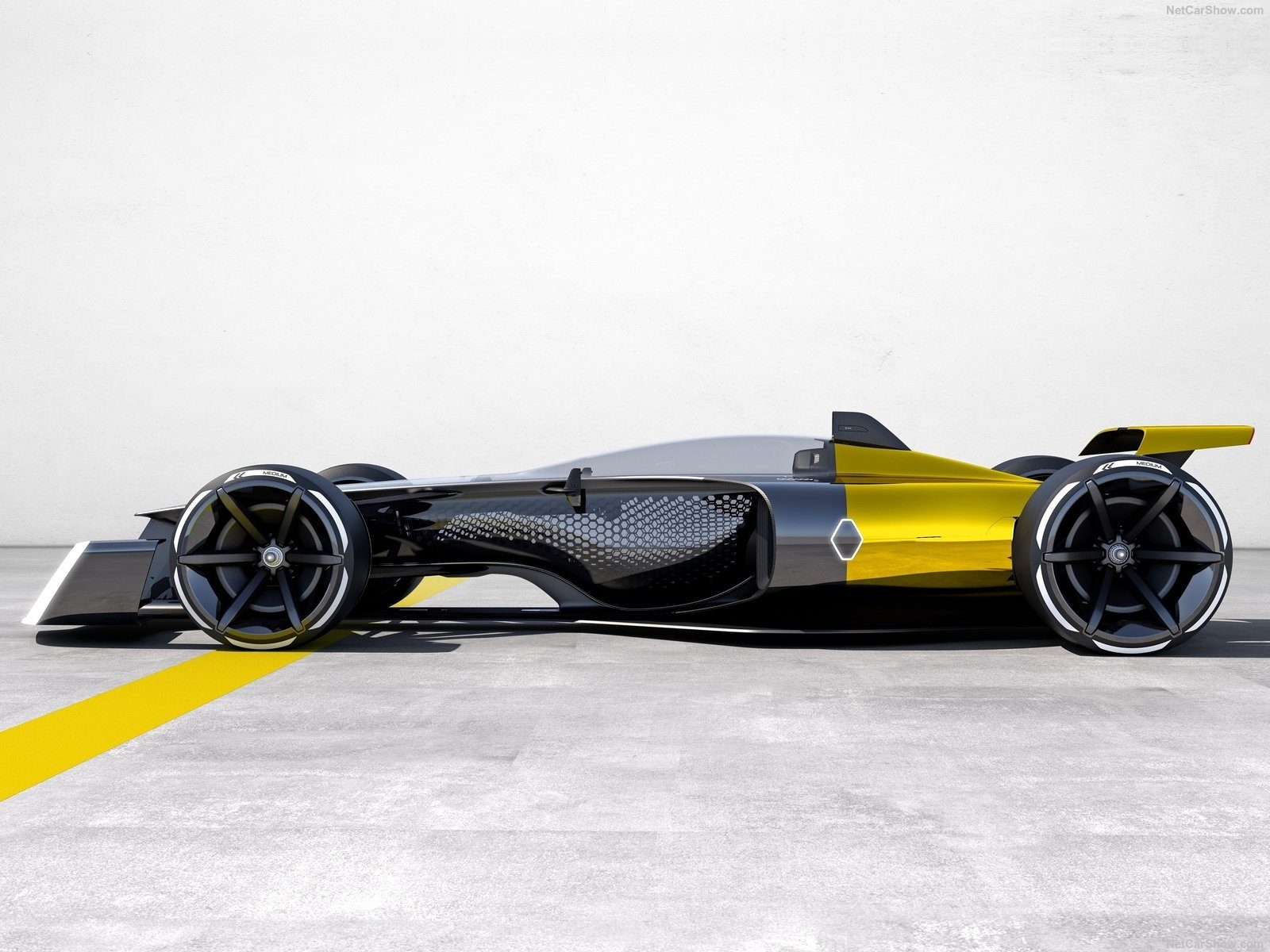 In response to television audience trends and shifts in broadcasting formats, Renault explores how Formula 1 in 2027 could become a more compelling form of entertainment. So, the format of Grand Prix weekends has been revised to make them more diverse, with exciting new opportunities to promote the drivers:

• Sunday's centrepiece-race shortened (250 kilometres instead of approximately 300 today) and divided into two parts: a long race and a second, shorter sprint known as the 'Final Sprint.'
• A Rookie Night Race, featuring the teams' reserve drivers and the drivers who are in their F1 rookie year, is organised on the Friday evening of race week, ahead of Saturday's official practice.
• With this vision, Renault is sending a powerful message to the sport's fans about the continued excitement and innovation ahead in Formula 1 racing.
• Renault is more than ever a key player in the world of Formula 1 and intends to remain so for at least ten more years.
• Over the course of these ten years, motorsport-honed innovations will continue to be carried over to the brand's passenger models both in the Renault Sport Cars range, as well as mainstream Renault vehicles. 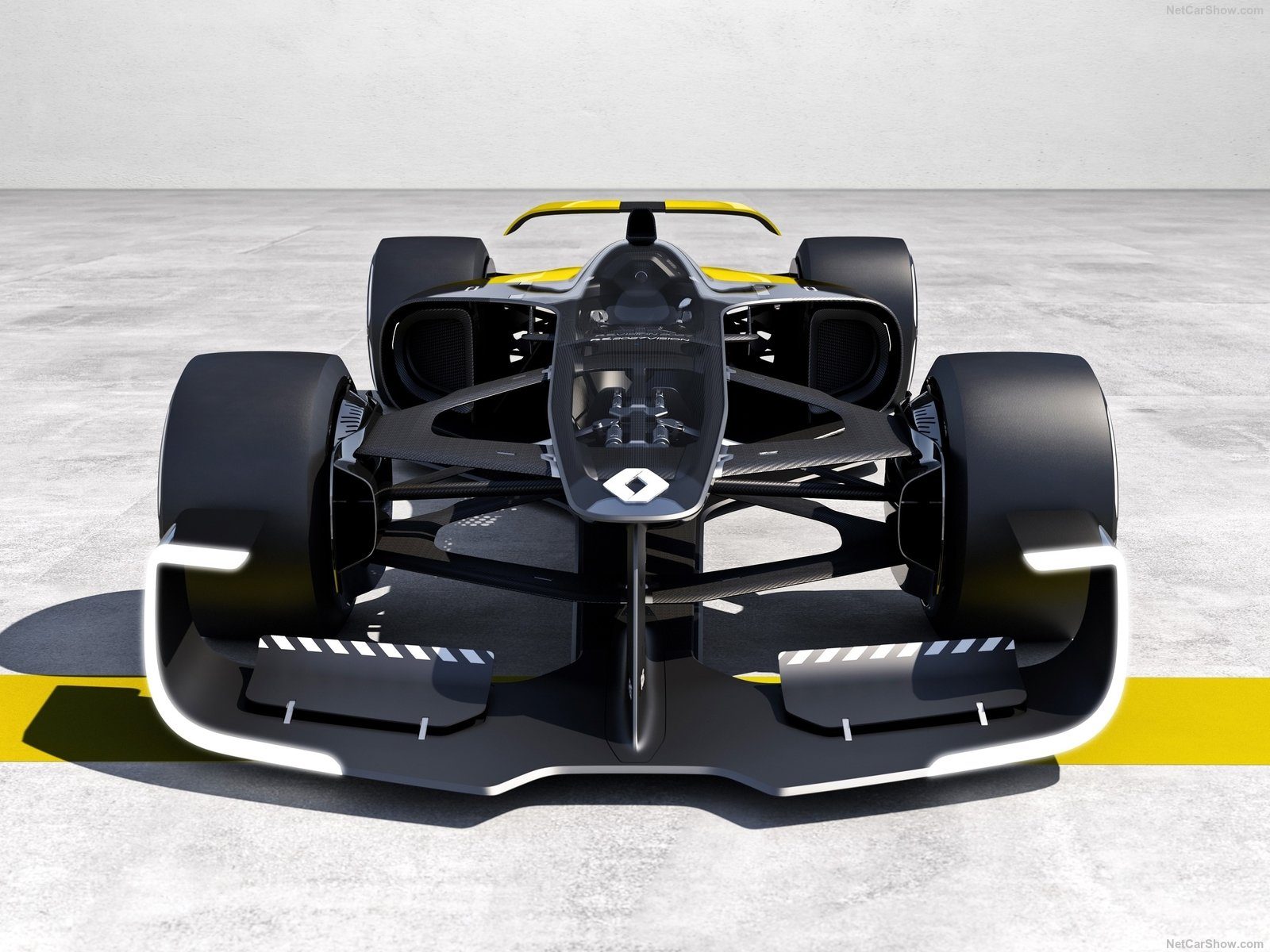 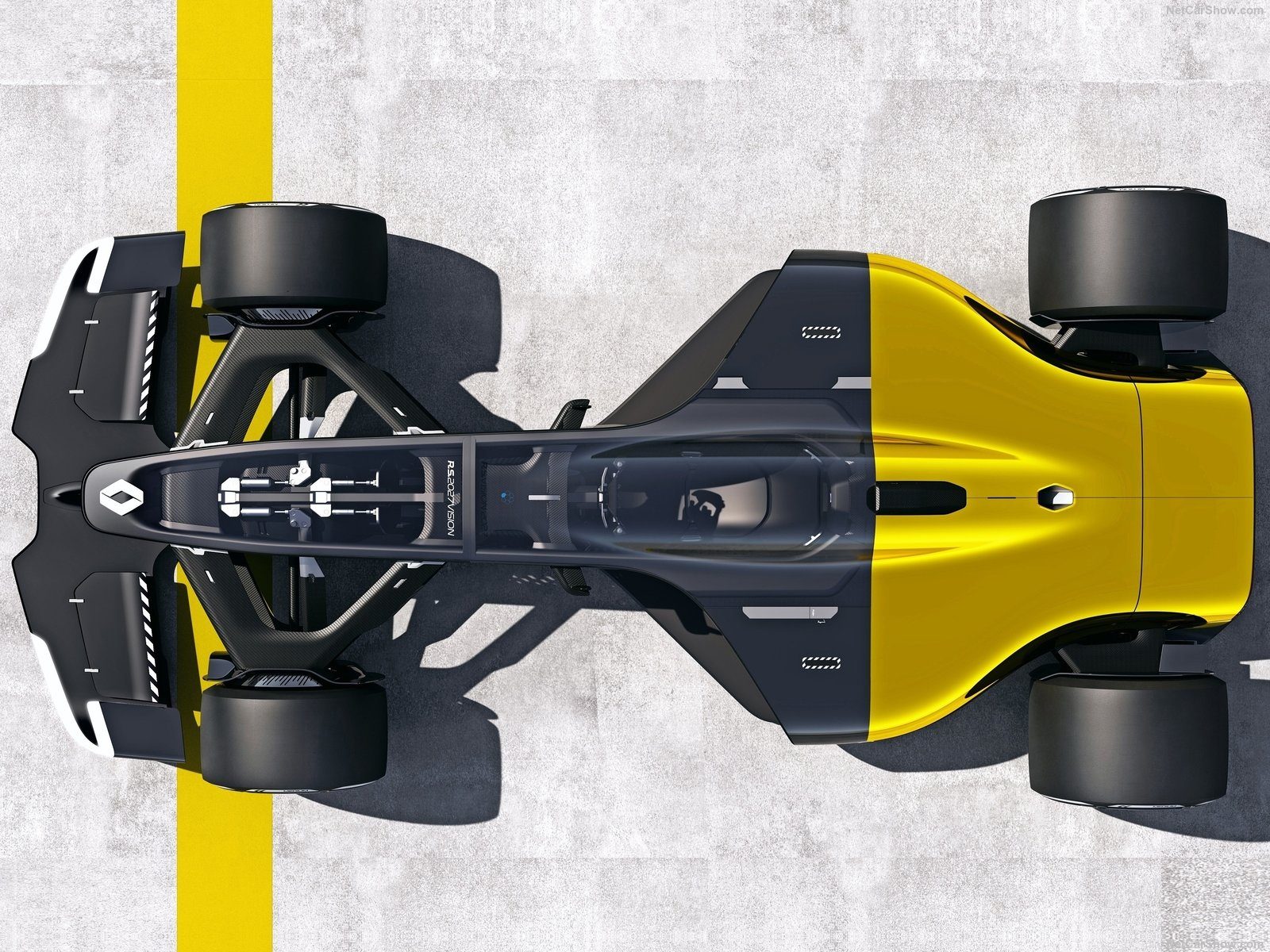 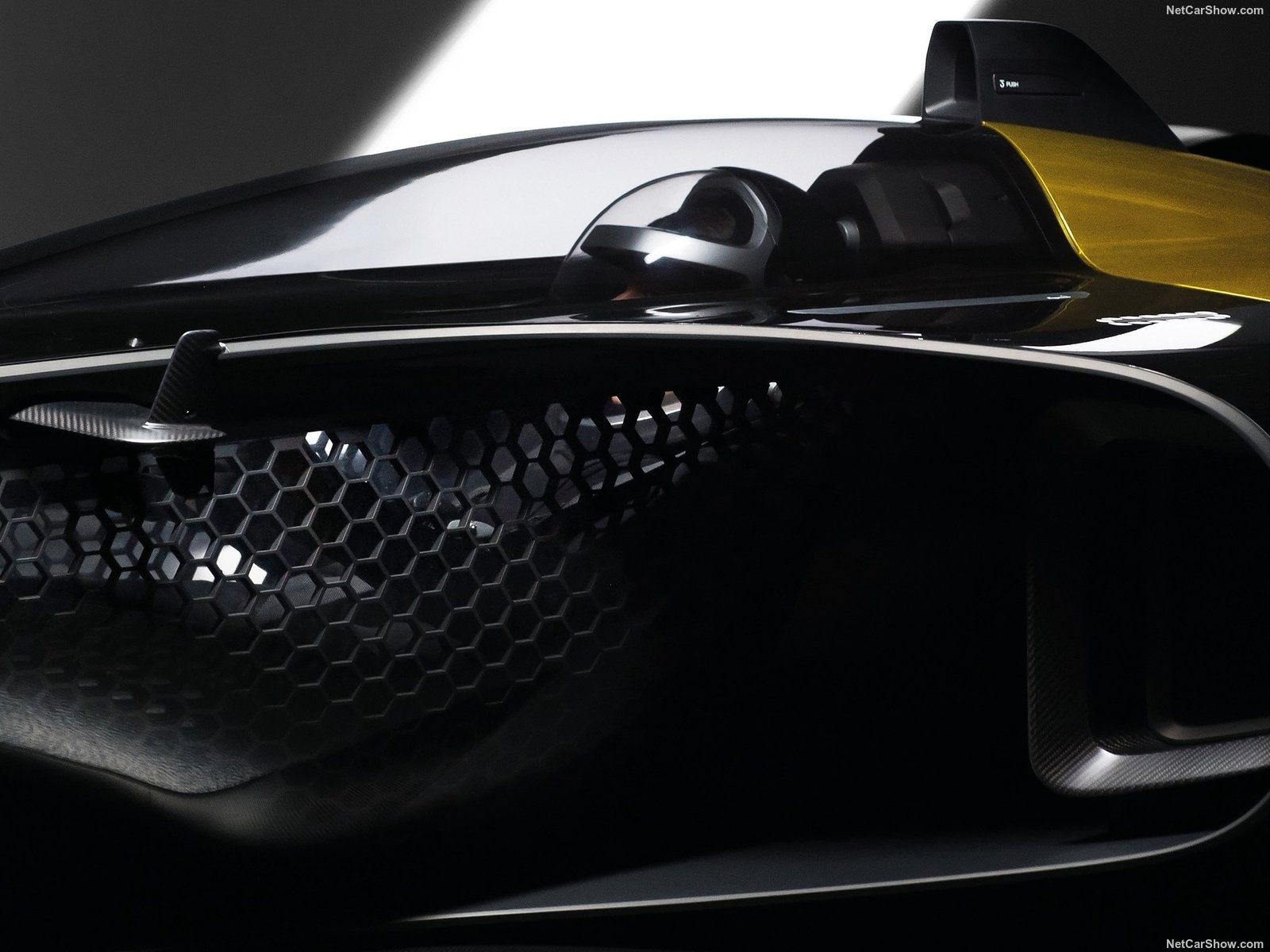 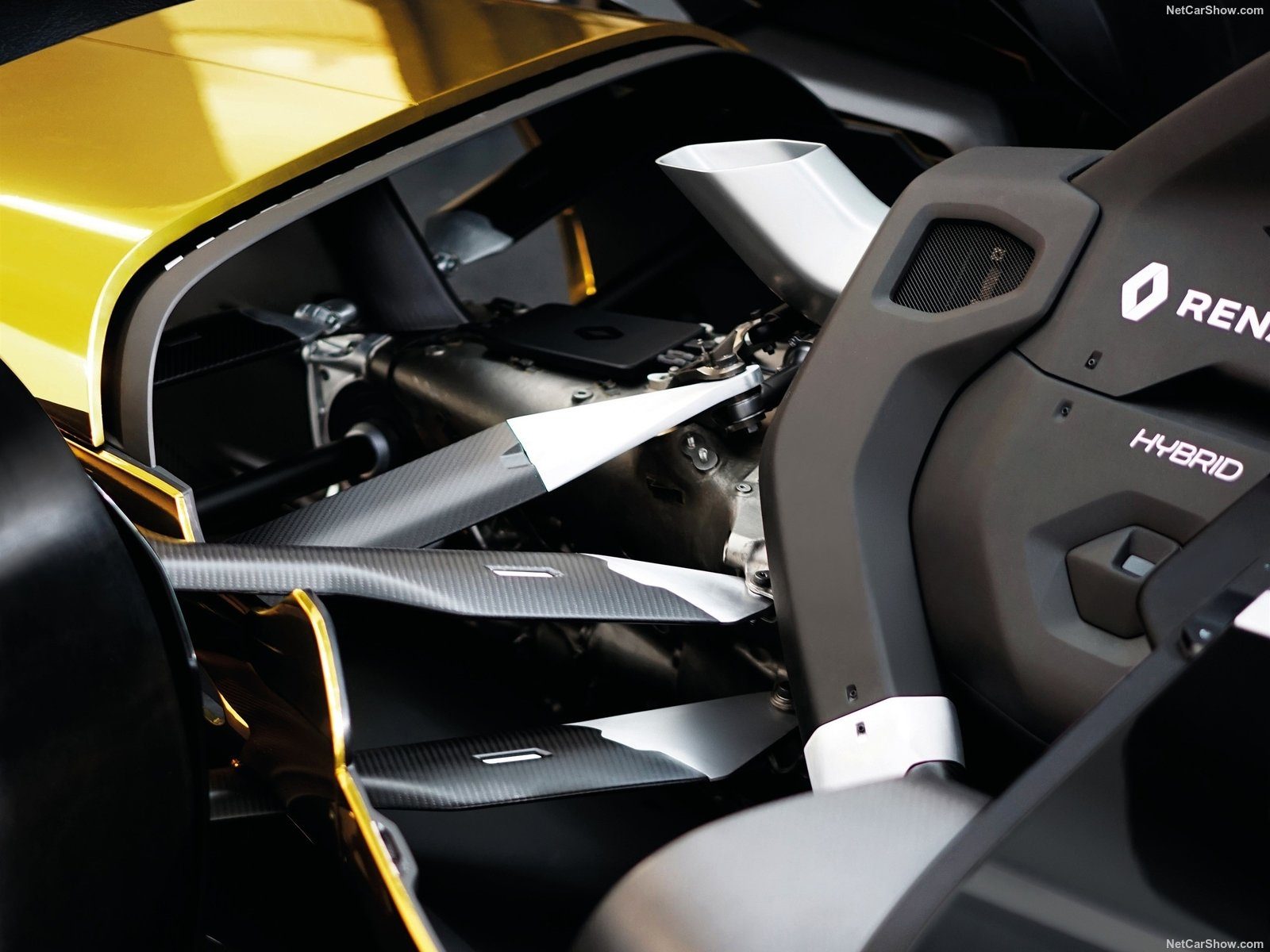 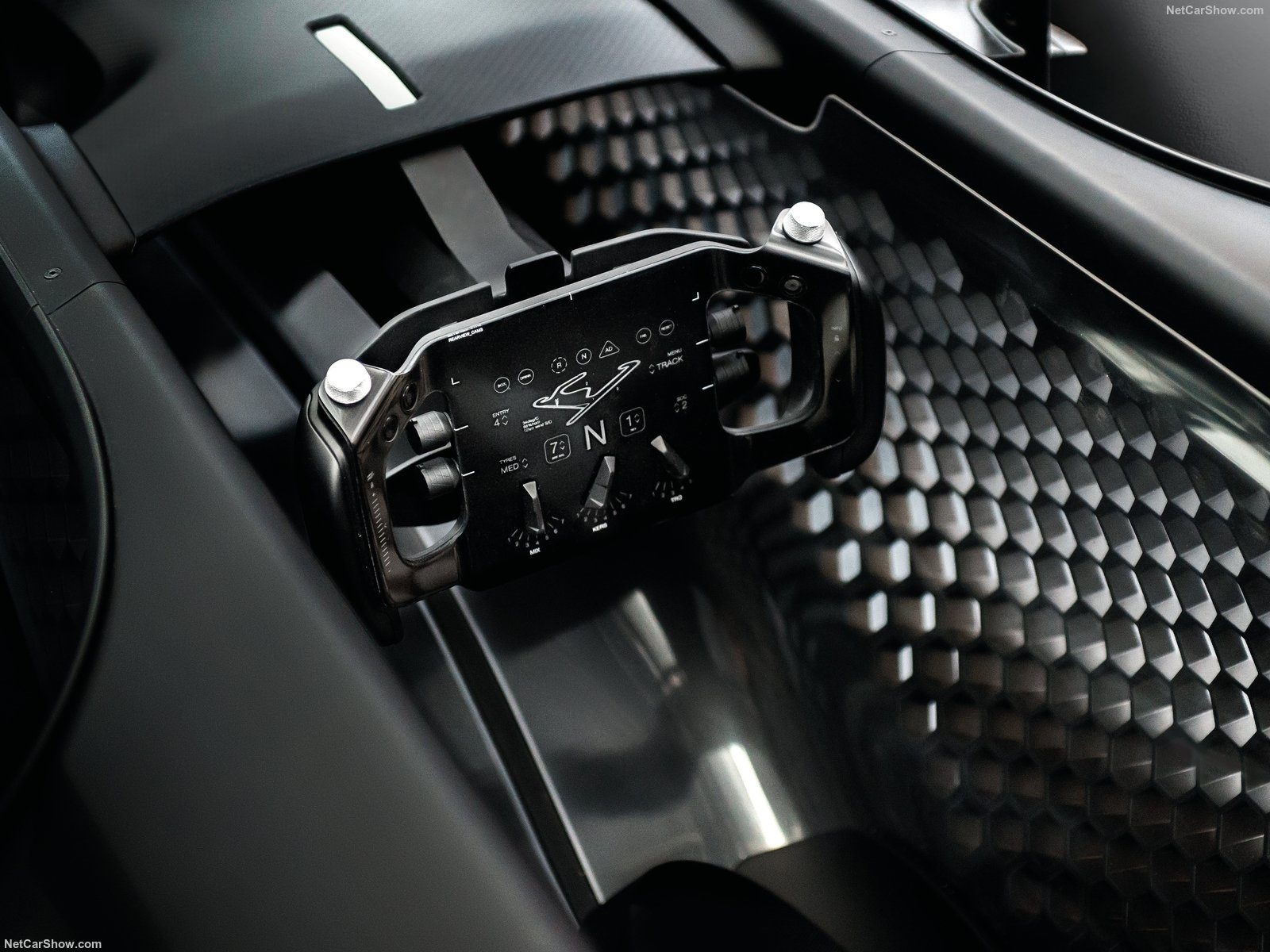 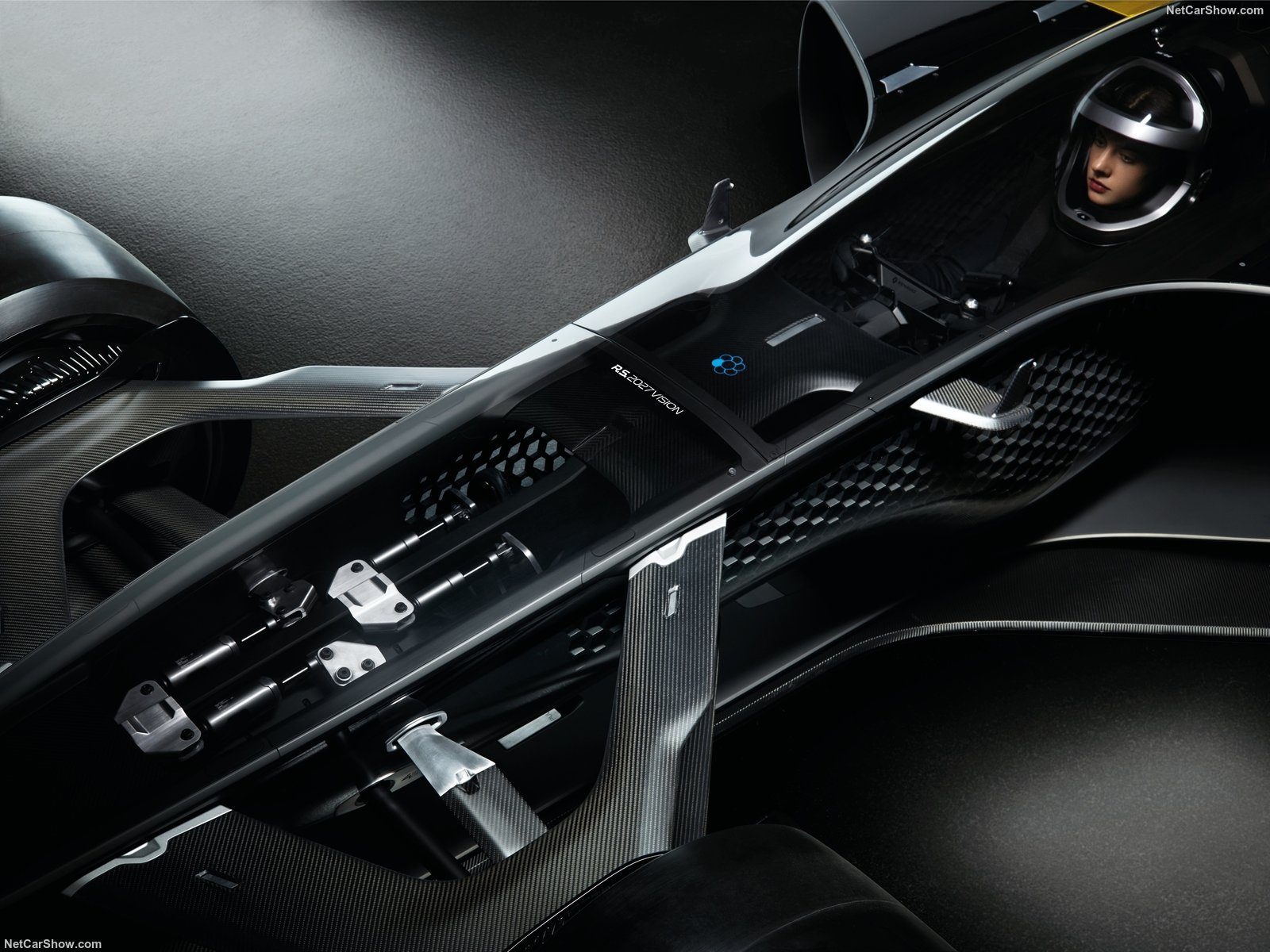 List of possible competitors that are currently in GT series