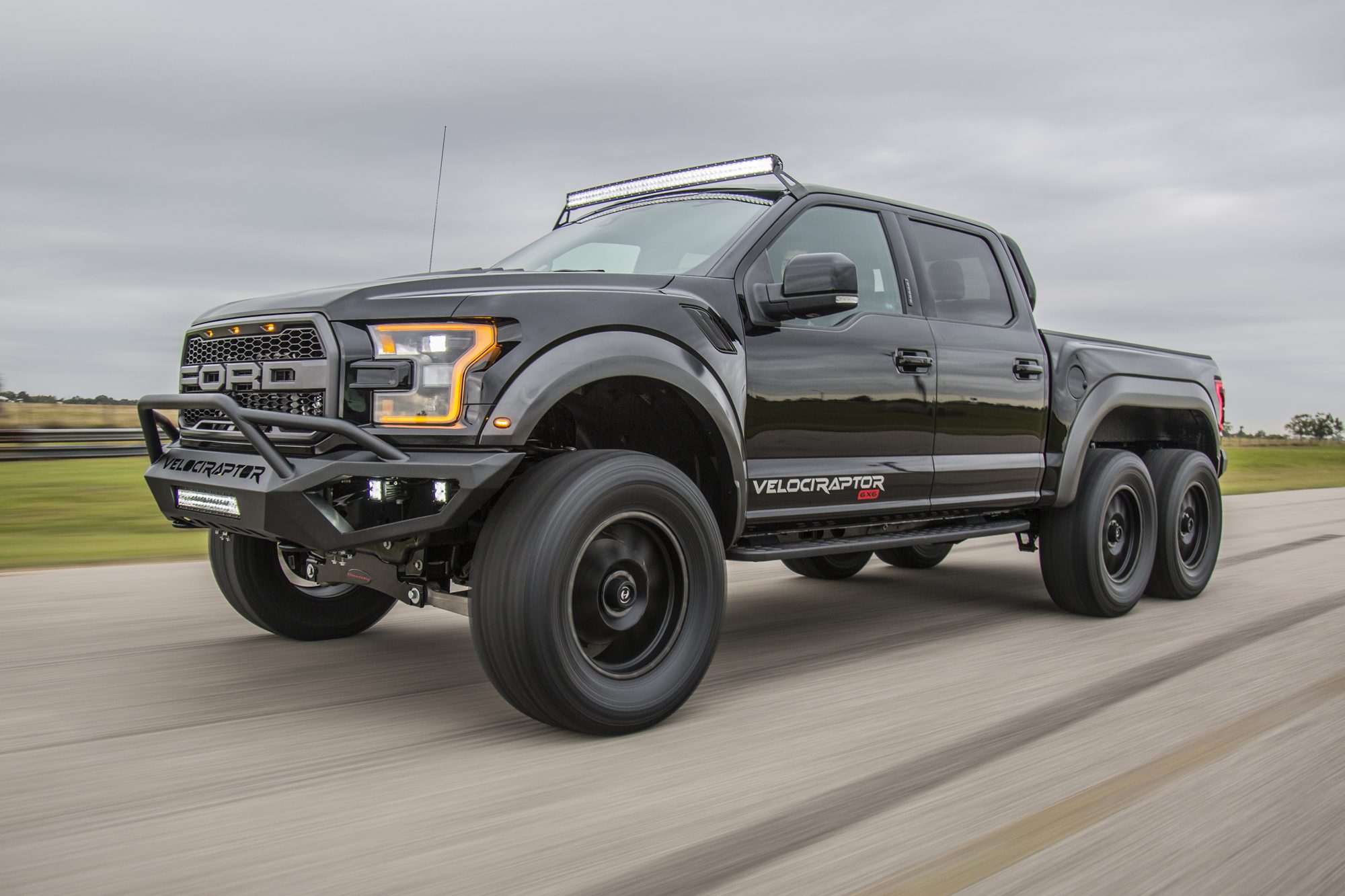 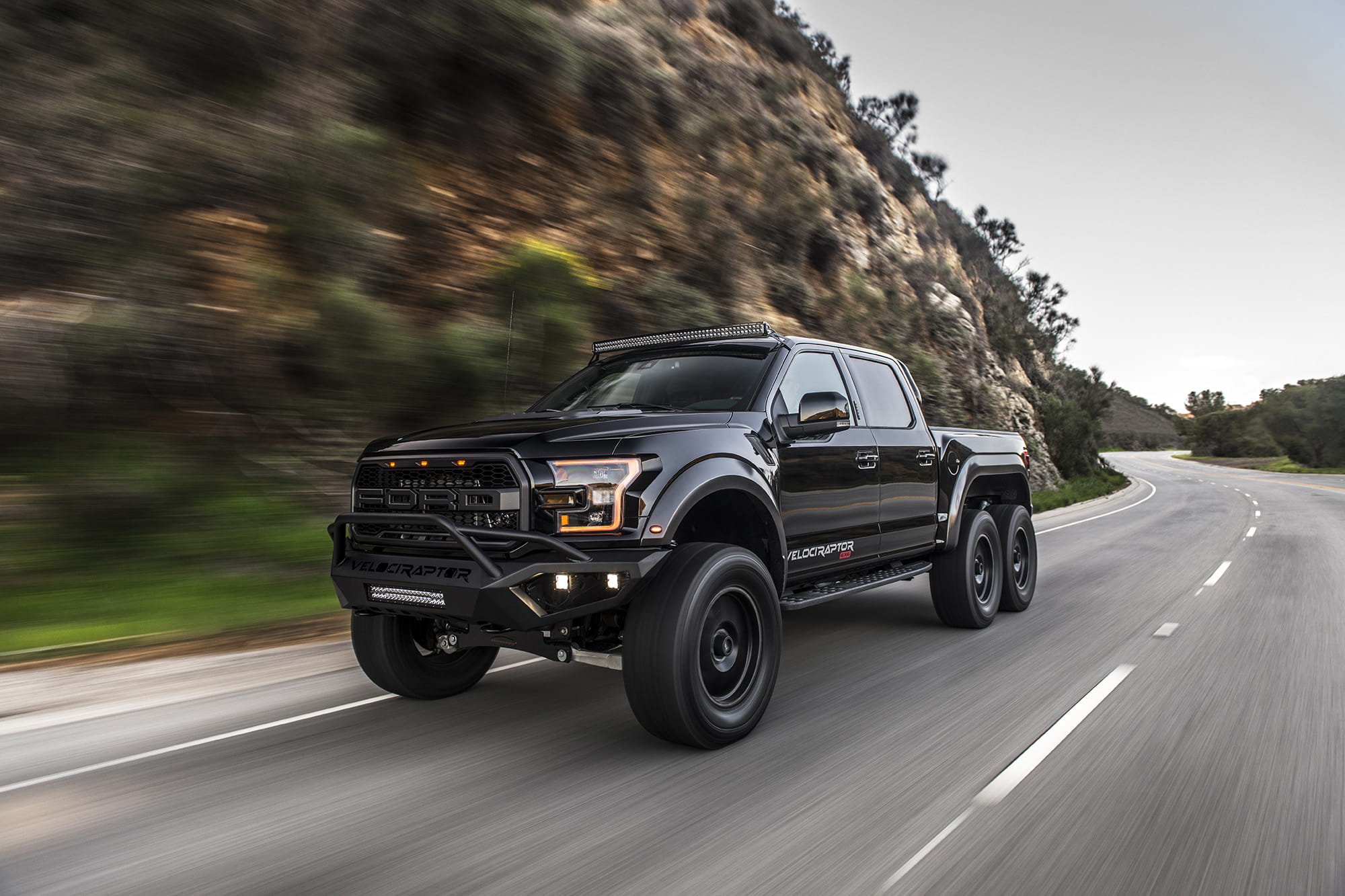 American tuner Hennessey has added an extra axle to the immensely capable Ford F-150 Raptor. The truck is called VelociRaptor 6×6, and it’s based on the four-door version of the second-generation Ford F-150 Raptor. Over a year after it was unveiled, the VelociRaptor 6×6 is finally entering production. But Hennessey only plans to build 50 copies of this apocalypse-worthy rig. 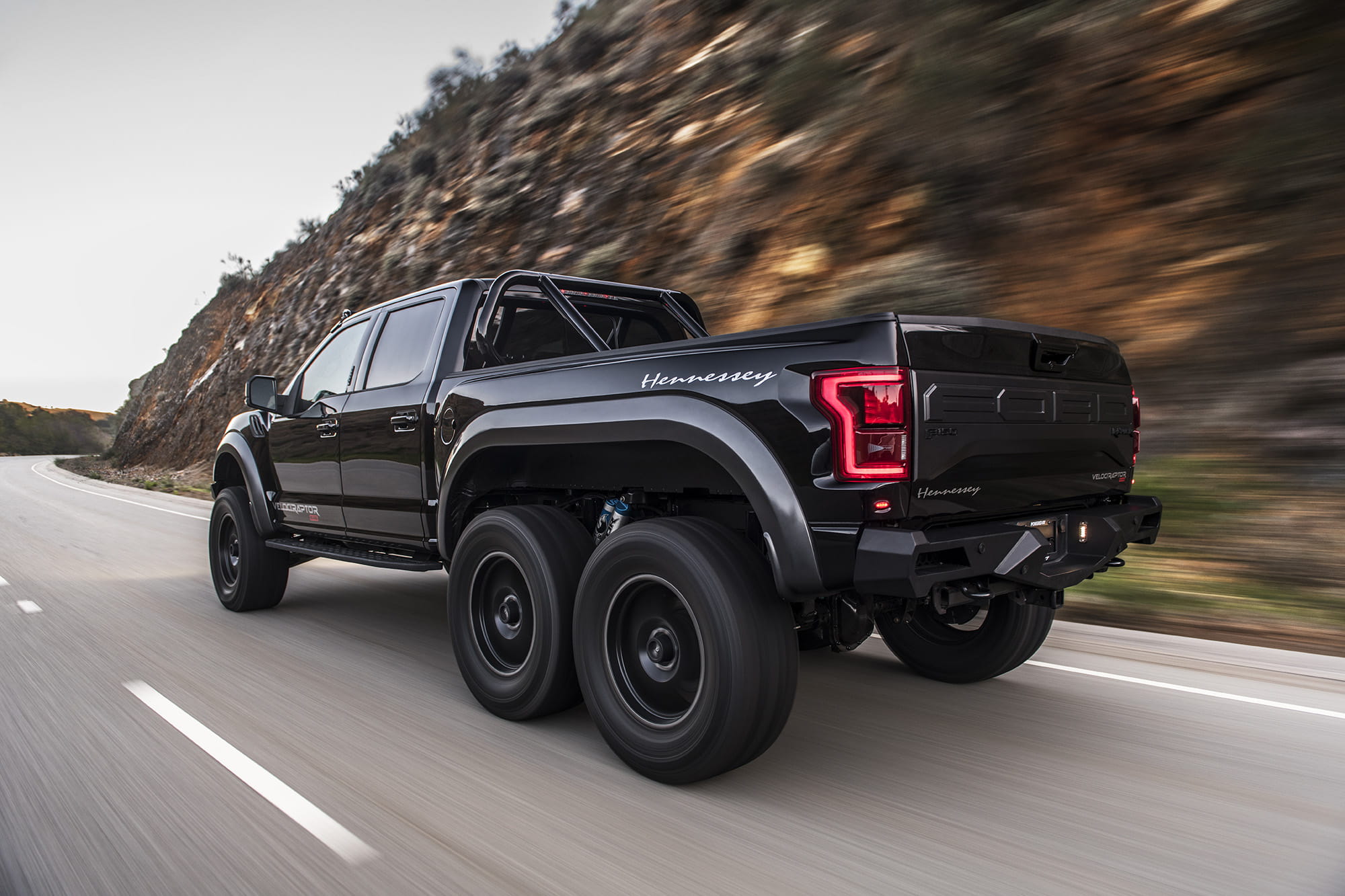 Hennessey has added a third axle and a longer bed, but the modifications don’t stop there. The truck also gets a new bumper with a built-in bull bar, four fog lights right above the windshield, 20-inch alloy wheels wrapped by off-road tires, locking rear axles, and a fully adjustable suspension manufactured by Fox. 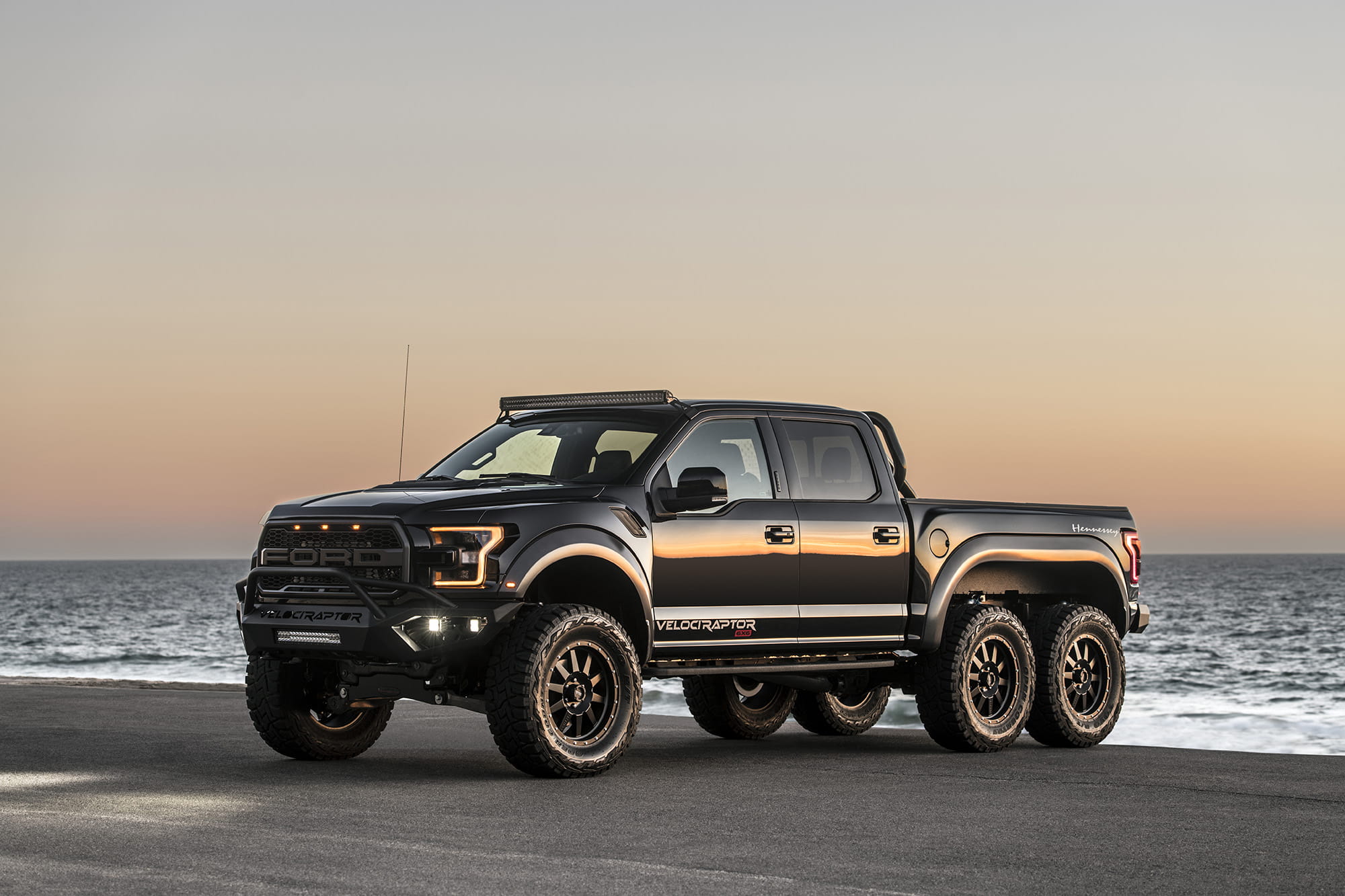 The VelociRaptor 6×6 uses the same 3.5-liter twin-turbocharged EcoBoost V6 as the stock F-150 Raptor. But while the stock truck makes 450 horsepower and 510 pound-feet of torque, the 6×6 can muster 600 hp and 602 lb-ft thanks to Hennessey’s HPE600 performance package. It adds a pair of up-sized turbos, a re-mapped ECU, a high-flow stainless steel exhaust, and a new air-to-air intercooler.The engine’s output is channeled to the drive wheels — all six of them — via a ten-speed automatic transmission. Hennessey says the VelociRaptor 6×6 will do 0 to 60 mph in 4.9 seconds. 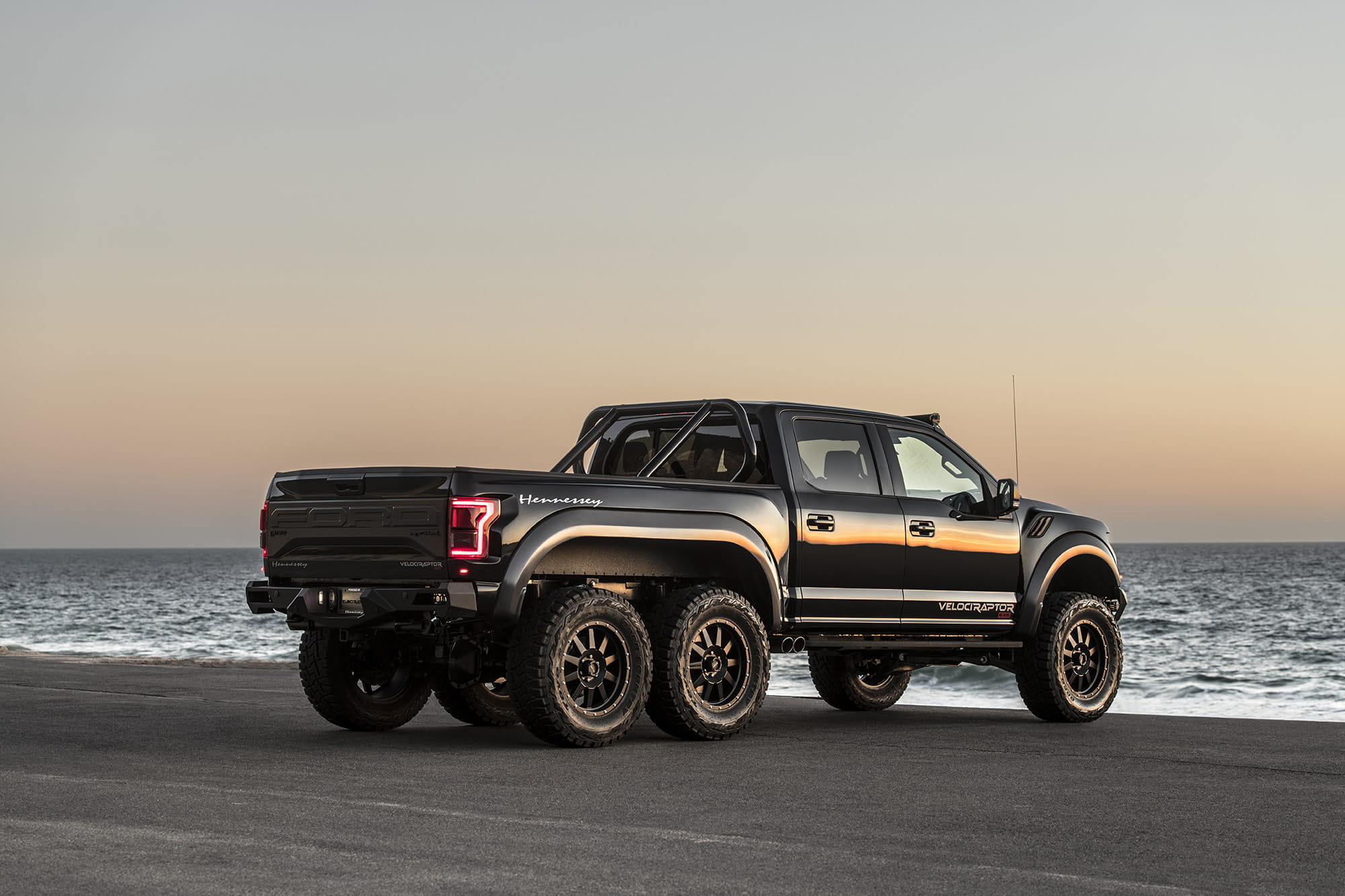 The list of options includes upsized Brembo brakes (which you’d likely want in such a beast), bigger wheels, and a customized interior. Finally, customers who are investing in the 6×6 to prepare for the end of the world, a full-scale zombie attack, or both can order it with armor. 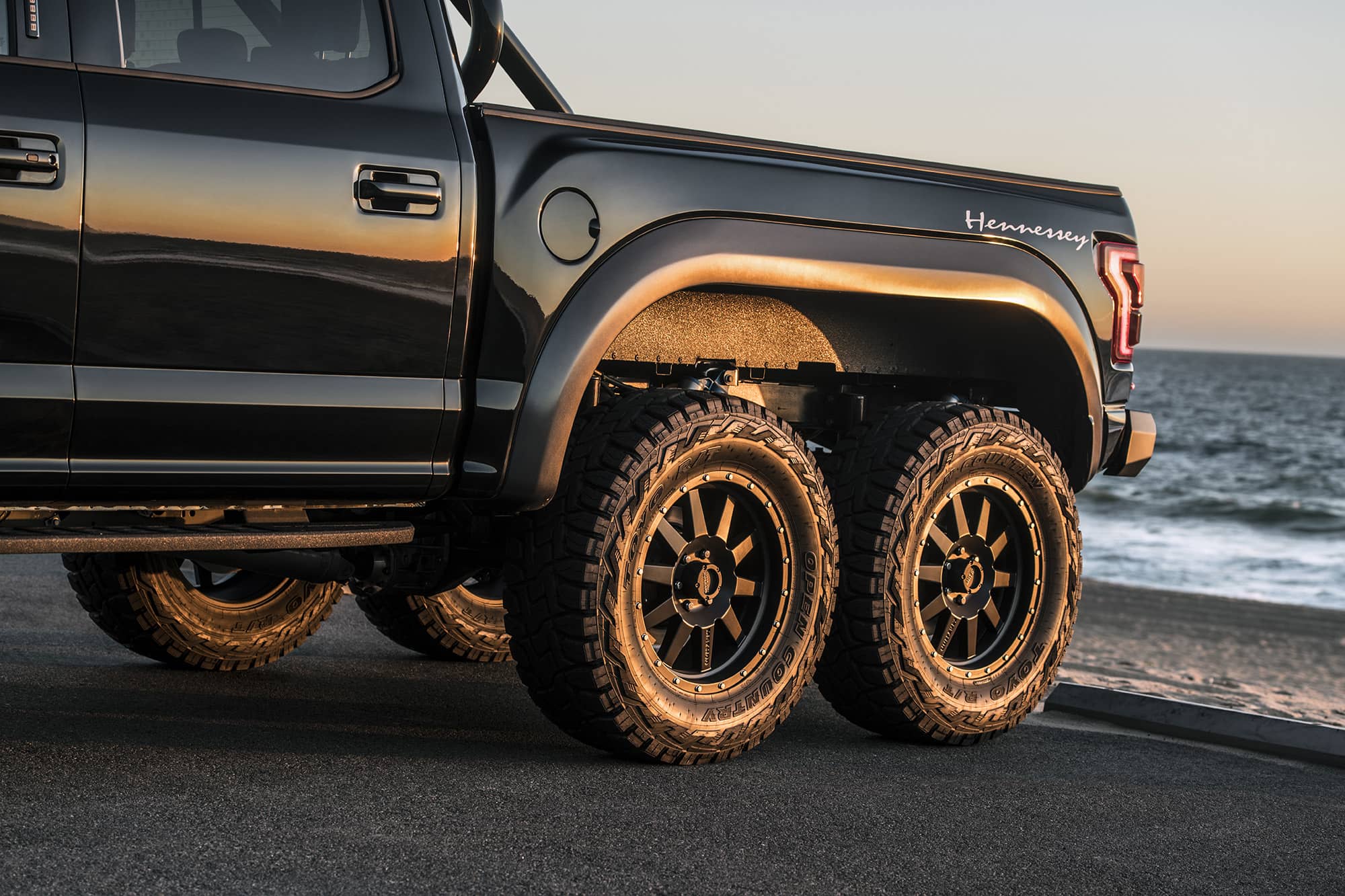 Hennessey’s six-wheeled monster isn’t merely a wild, one-off concept designed to turn heads on the auto show circuit. It’s heading to production, and pricing starts at $349,000 including the cost of the donor vehicle. Buyers can purchase the VelociRaptor 6×6 either directly from Hennessey or through select Ford dealerships. If you just want the performance upgrades and not the 6×6 conversion, Hennessey will also build you a souped-up, four-wheeled Raptor. 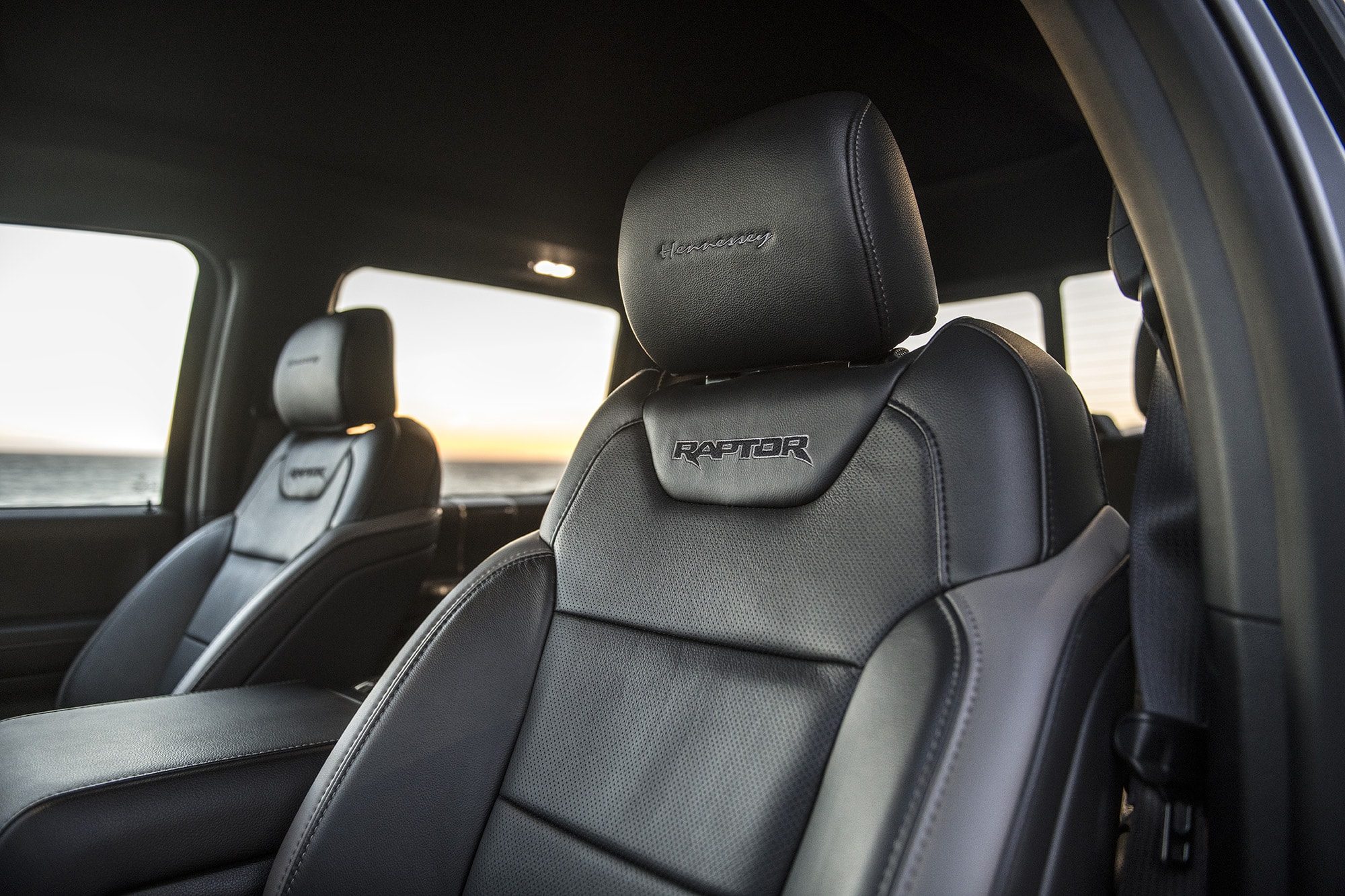 You’d think one six-wheeled performance truck would be enough, but these vehicles are becoming something of a trend among people with more money than sense. Mercedes-Benz kicked things off with its G63 AMG 6×6, and British tuner Kahn Design has tried to one-up the Germans with its Land Rover Defender-based Flying Huntsman. Who knows where this madness will go next. 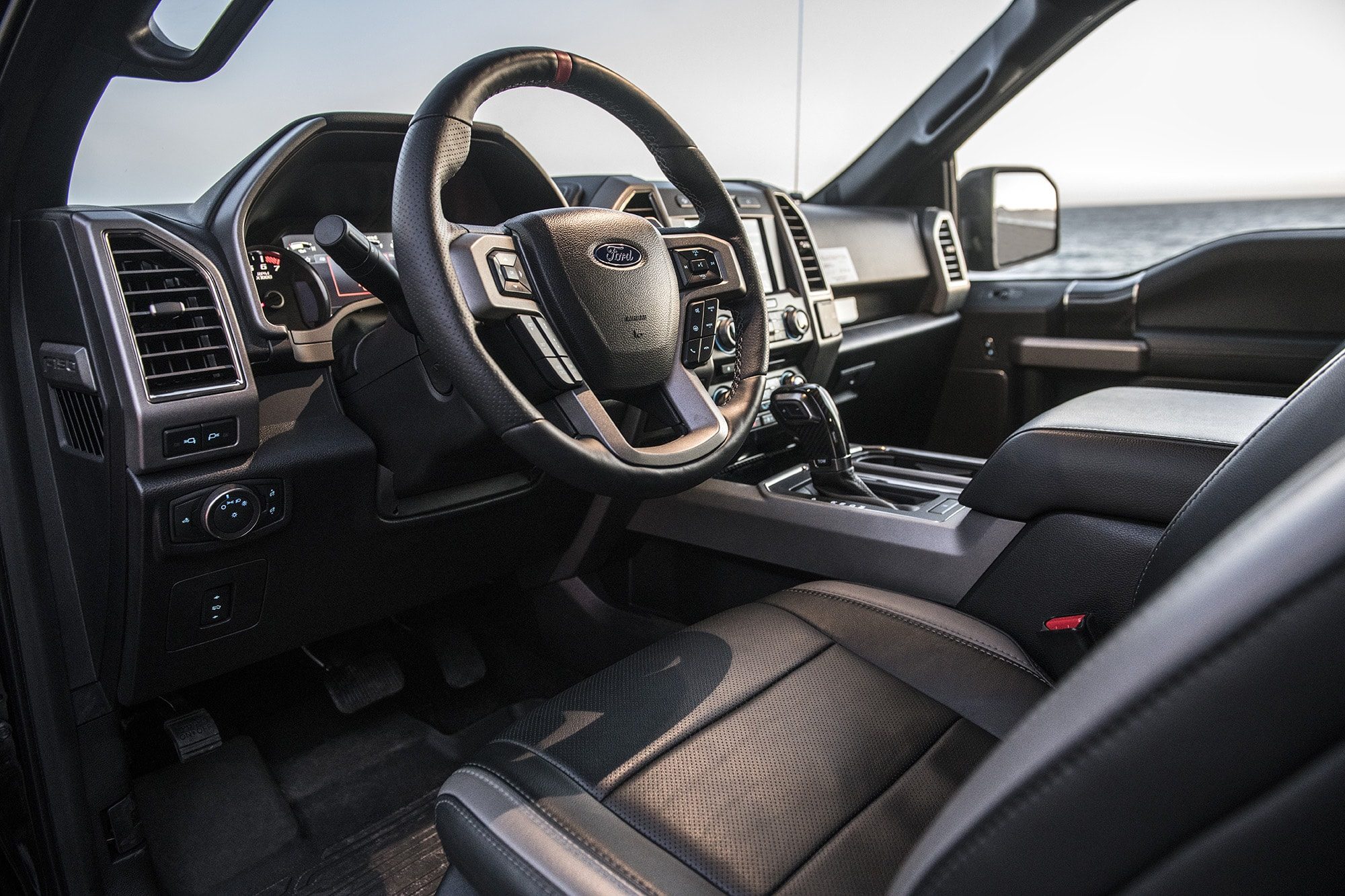 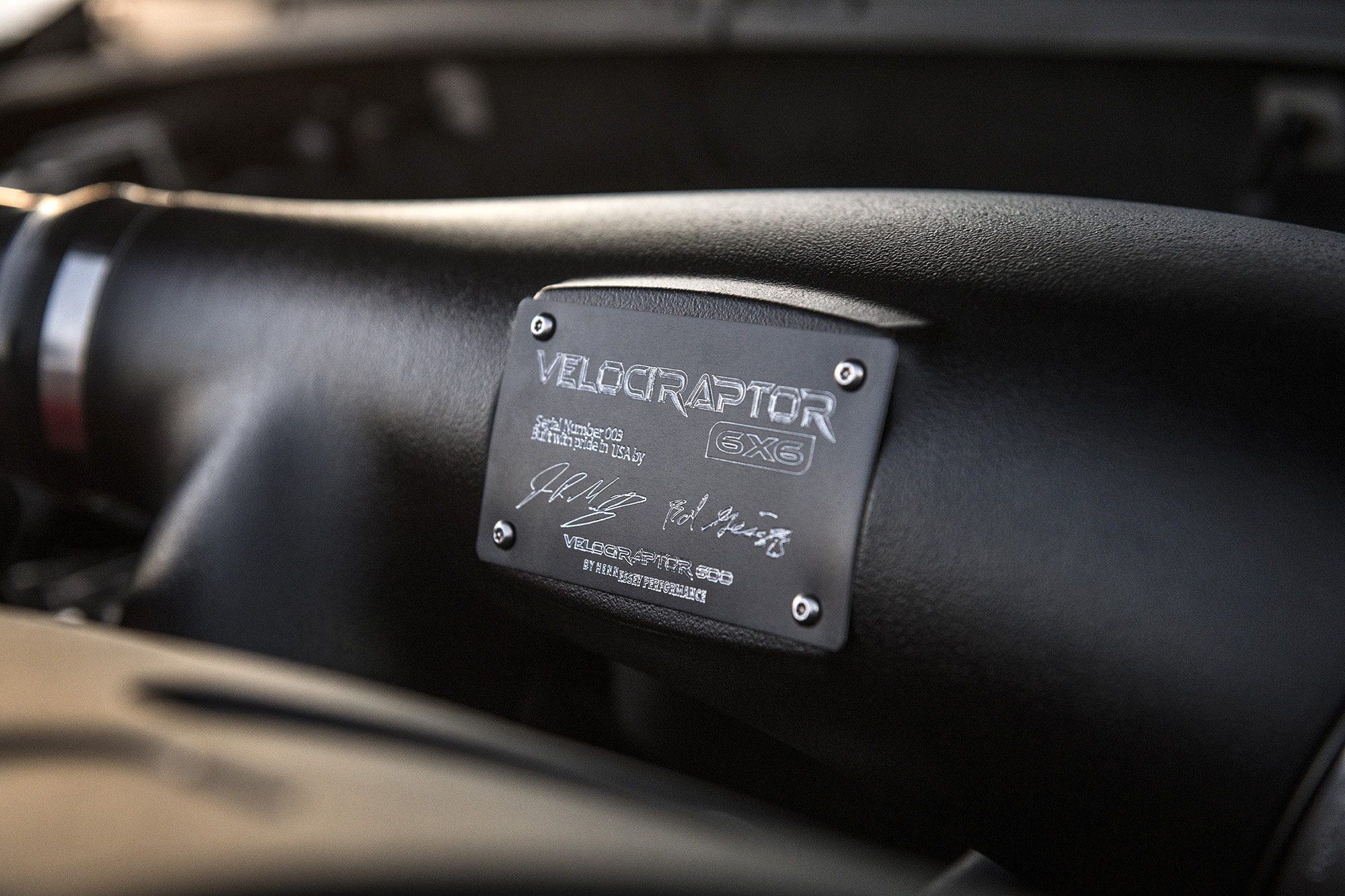 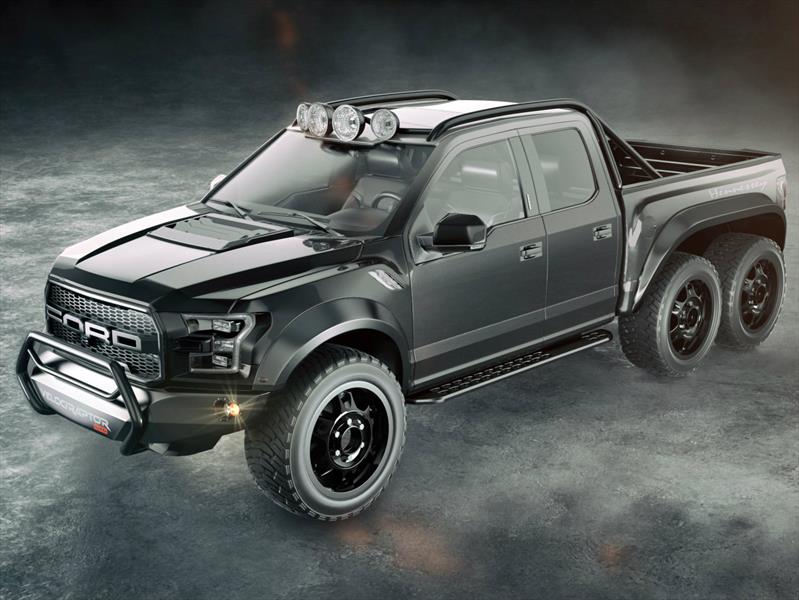 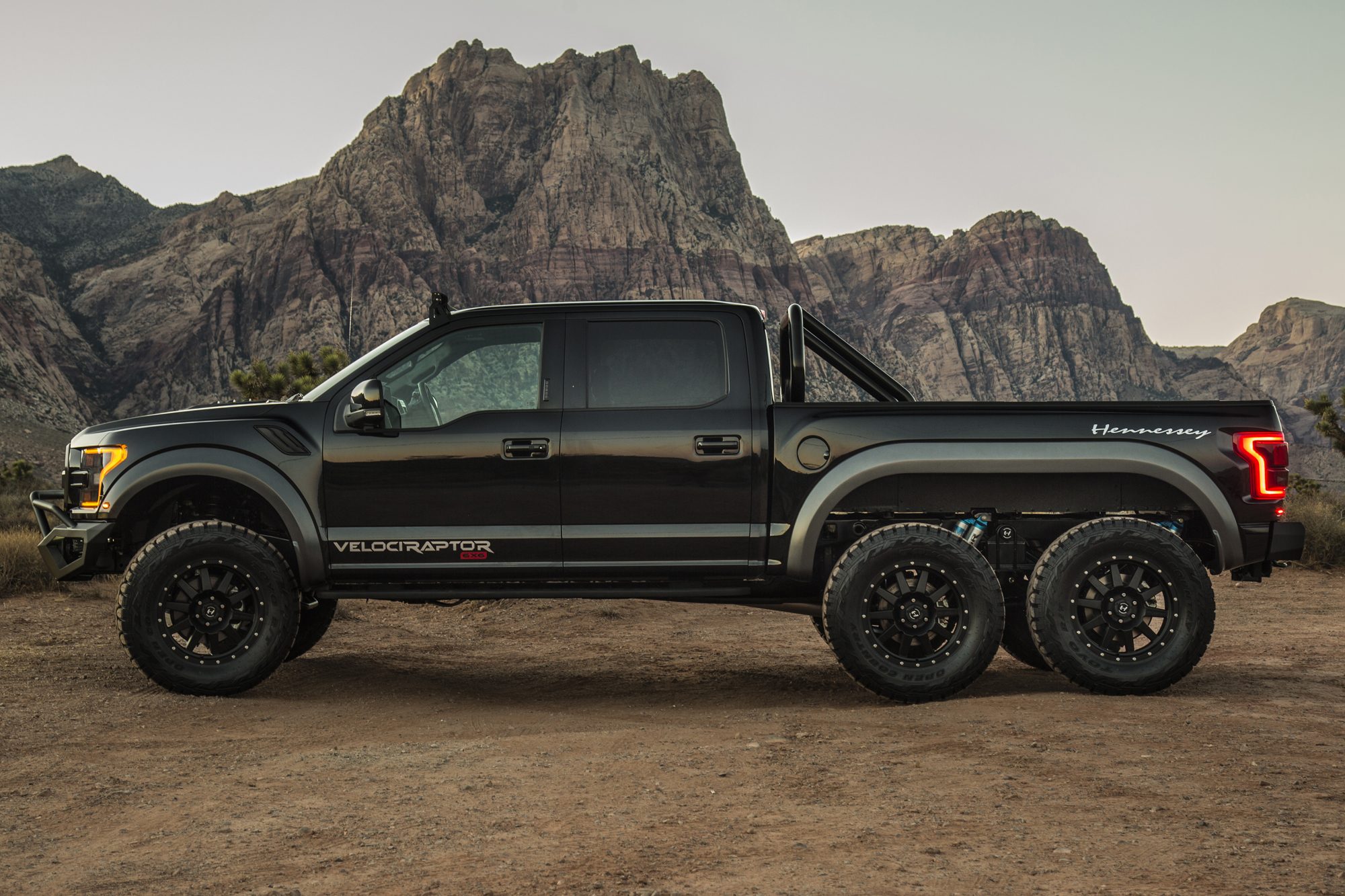 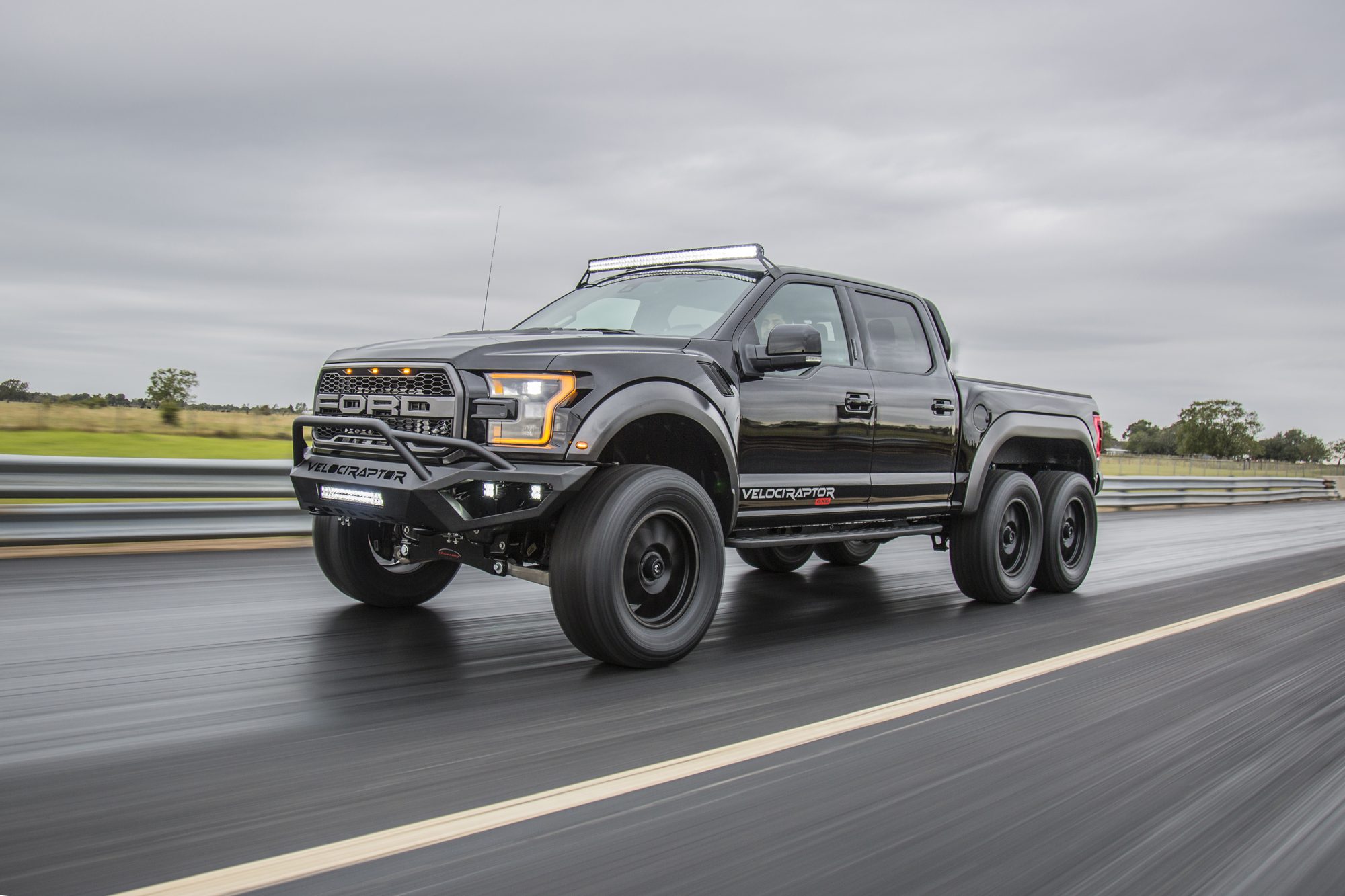 Cristobal1234
it’s based on the four-door version of the second-generation Ford F-150 Raptor.
Click to expand...