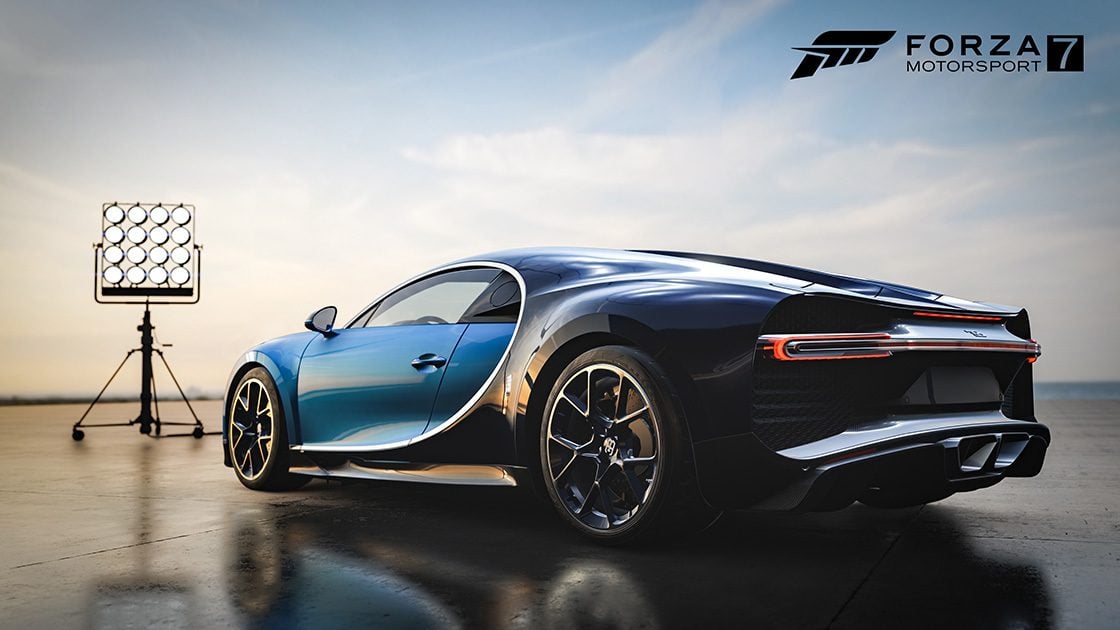 We’re doing things a little differently here this time around. Instead of our usual single-ride videos, we’re going to start looking at entire DLC packs in one quasi-review format. It starts with Forza Motorsport 7, and its Dell Gaming Car Pack — otherwise known as “that one with the Chiron”.

There will be no stars here, just our quick thoughts on the cars, peppered with some direct-capture footage from behind the wheel. While we’re starting with FM7, expect to see a whole bunch of videos like this over the coming days, for Gran Turismo Sport, Project CARS 2, and more.

Like what you see? Share your thoughts in the comments section. You can catch the video below, and our thoughts on the cars underneath that.

Finally! A modern Aston racer comes to Forza… right as it’s replaced. Nonetheless, as the new car comes with a turbo Mercedes V8, we’re happy to see this car in FM7 as a swan song for one of endurance racing’s elder statesmen.

It runs in the Forza GT category and as you’d expect, it fits in nicely there. It requires a more thoughtful right foot than the mid-engined racers, and feels just a little old-school next to the C7R. But that engine note though — it will be missed.

The next car’s sure to annoy the purists, on account of it being wrong-wheel drive. Yes, the TT RS, despite the name, sends power exclusively to the front. It was built to tackle a very specific class at the Nurburgring you see, and then took on Pikes Peak.

Truth be told, it might be the most fun car to drive in the pack. It goes where you want with minimal fuss, and only really makes its front-drive nature apparent when you get too eager in slow corners. It’s also got that unique five-cylinder warble.

Unfortunately, the TT is a misfit within the realm of Forza. Homologation puts it in Forza GT against cars like the Aston, where it’s utterly outclassed. Why it isn’t made to run against the touring cars is beyond us.

It’s the car every kid was asking for once they got two S14 Silvias. Yes, the Chiron is here in all its 1500hp glory. The production version of a certain Vision GT car shocks you because of how utterly easy it is to drive.

Okay, thanks to how quickly it builds speed, you do have to recalibrate your mental braking points. It feels lighter on its feet than a Veyron, but there’s still a sense of plenty of weight sitting just behind your digital shoulder. The front tires lose grip before the rears, so it’ll push if you’re heavy with the throttle. Which is exactly what it did at La Sarthe, where the Chiron feels very penned in at its namesake Bugatti circuit.

Here’s one of the two Mopar trucks in the pack. It’s here to remind you that yes, Dodge does in fact still make the Durango. It makes the Chiron feel like a ballet dancer by comparison, though at least it has a solid V8 soundtrack. But with the Jeep Trackhawk also showing up in an earlier pack, and the regular SRT version of the Cherokee already in the game, we’d be hard-pressed to recommend this one.

Forza Horizon 3 was an ode to the Aussie car industry. Motorsport 7 brought all those cars back, but this is the first time an Australian car has been DLC. It’s the ’60s HK-gen Monaro, and it’s a good one. Naturally, we took it to Bathurst.

In stock form, like any big-engined car of this age, it’s very short-geared, topping out around 130mph. Also like most cars of its time, it’s hilariously under-tired, allowing you to steer it with your right foot (or finger, for pad users out there).

Kia’s on a roll. This marks the Stinger’s first console game appearance, and it’s a fun sports sedan. It feels very well-rounded, and far lighter than its curb weight suggests. That long long wheelbase makes it very predictable, and easy to gather up in the event of a slide. Which you’ll find yourself doing just for the hell of it.

It sits in the Sport Touring class. Stock, it’s one of the weakest cars in the group, but Homologation should put it on pace at the higher-speed circuits within Forza.

We end the pack with a Ram. A bigger, sillier version of a truck already in Forza. We took it to the Patriot mile at VIR because where else would you take a 2.5-ton truck?

Let’s just say we hope there’s an off-road or rally expansion in the works, Turn 10.