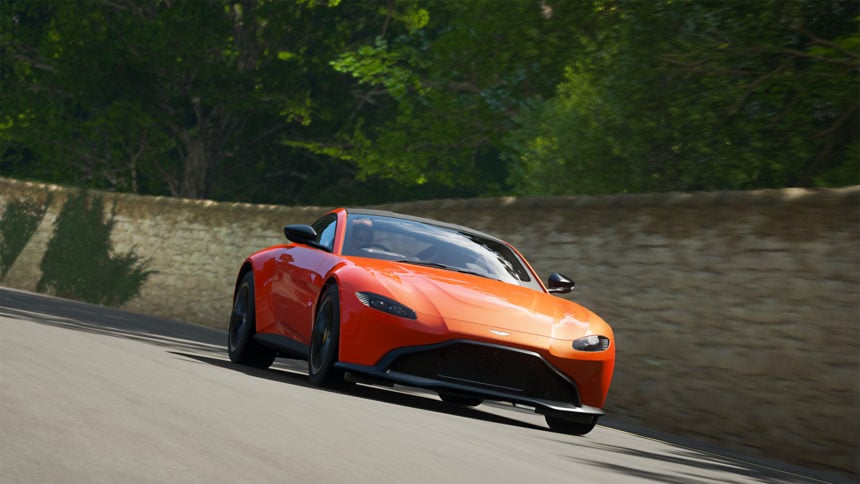 A new pair of vehicles have arrived at the Horizon Festival this week. With the summer haze in full effect this week’s duo is more than up to the task of heating things up.

Up first is the 2018 Aston Martin Vantage. Succeeding the previous model, now 12 years removed, there’s some big shoes to fill. Luckily, the new Vantage kicks things off on the right foot. If it looks a little familiar, especially the front grille — it should. Its exterior design takes cues from the track-only Vulcan and purpose-built DB10.

Powered by a Mercedes-AMG M177 4.0-liter twin-turbo V8, the Vantage makes 503hp. For those keeping score, that’s 83 more ponies than its predecessor. The new model doesn’t shy away in performance either. It will rocket to 60mph in 3.6 seconds and on to a top speed of 195mph.

The second car is the 2014 McLaren 650S Spider. As the name implies, its a convertible version of the 650S. Like the coupé, up to 25% of its parts are new compared to the outgoing 12C Spider. It’s a peculiar, if not controversial choice that’s sure to spark some debate.

While the Spider fits in with this week’s motif, it offers nearly identical performance to the existing 650S Coupé. An admirable feat in and of itself considering its almost 90lb heavier. It will hit 60mph in 3 seconds and charge onward to its top speed of 204mph. That’s fast for a drop top any way you slice it.

Unlike the i8 Roadster and Gallardo Spyder, the McLaren isn’t an open top. Instead, the top only comes down in Forzavista, making it an awkward choice. Both cars are available for purchase separately courtesy of the Xbox Store. Car Pass owners need only collect the cars and add both to their garage.

Next week will see the addition of two European racing machines just in time for autumn.

Forza Horizon 4 Car Pass
14 Comments Discuss this post in our forums...
Test Your Badge Knowledge With Our Car Logo Quiz