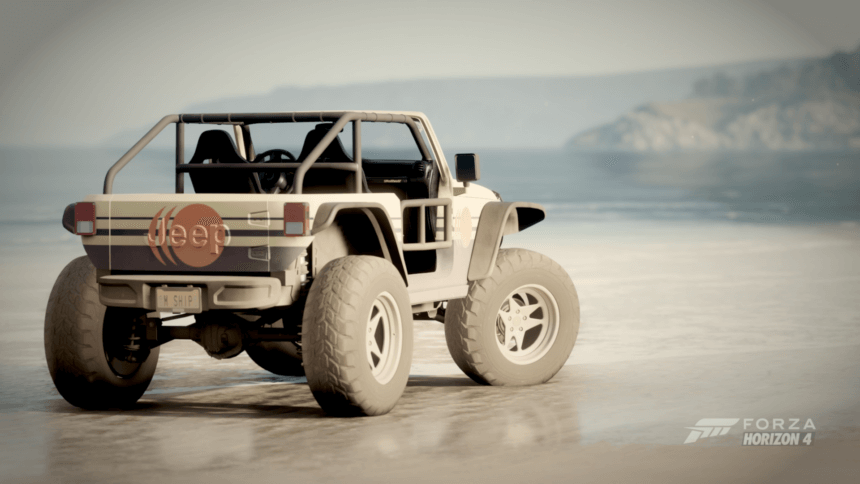 As the sun dips below the horizon, the latest Autumn season has kicked off in Forza Horizon 4. Among the piles of leaves are the latest round of new events, with more prizes up for grabs.

New content takes a break this week, but players can have another chance to win a wild Lamborghini, plus more Playlist prizes for 50% and 80% completion. Pack your essentials and let’s head out to explore Autumn. 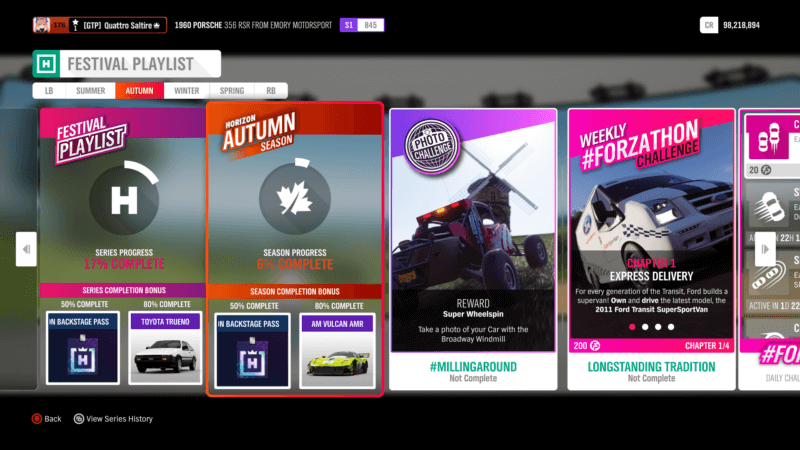 A Centenario of Power

The AMR Pro upgrade package takes the already extreme standard Vulcan and turns the insanity meter up a notch. That starts with the aerodynamic enhancements, with a larger rear wing and new front dive planes help bring extra downforce. The Vulcan’s 7.0-liter V12 remains at 820hp, meaning the signature battlecry will continue to fill the air.

Another Horizon Backstage Pass is also available if you’re looking to find a car you haven’t acquired yet.

Autumn’s latest Photo Challenge takes us back to Series 25 for some #MillingAround. Simply pull out your best car and snap it at the Broadway Windmill. Seasonal championship prizes feature the 1994 Toyota Celica and a Forza Edition of the BMW E28 M5.

One car to look out for is the 2016 Lamborghini Centenario LP770-4. Built to celebrate 100 years since the birth of its founder, the Centenario features wild styling worthy of bedroom posters. Under the skin sits the familiar underpinnings from the Aventador. That means a bombastic 6.5-liter V12, tweaked to make 760hp for this special anniversary car.

If you want the Centenario, you’ll need to win the “Surfer’s Paradise” championship. 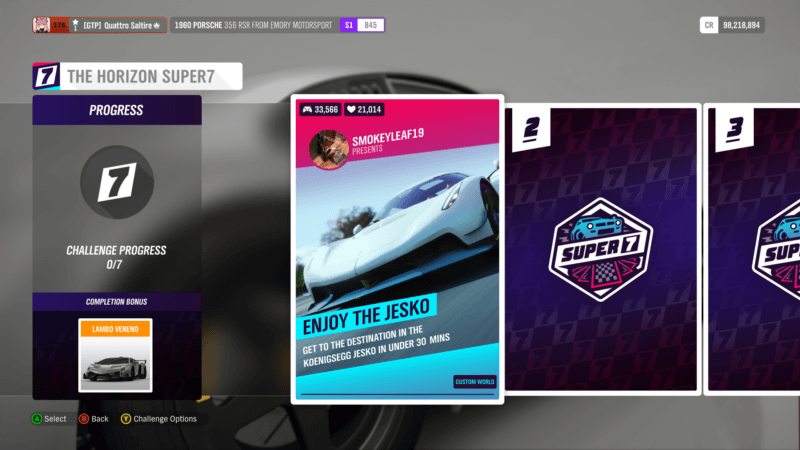 Lamborghini is also on the menu as this week’s Super7 prize. Complete all seven challenges to recieve the very angular Veneno.

You can find the rest of Autumn’s events below: 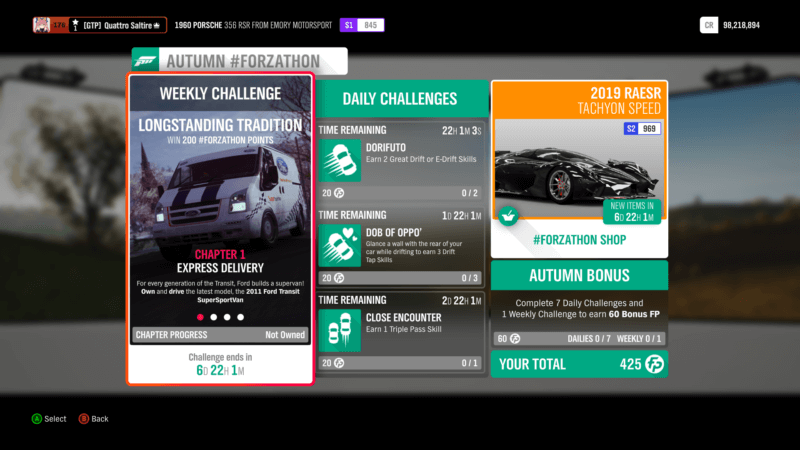 Forzathon is putting on its work boots as the spotlight shines on the 2011 Ford Transit SuperSportVan this week. Climb aboard this national icon to get started.

Next, mix things up against your opponents and claim victory in 2 Road Racing Series sprint events. Afterwards, take out the trash as you’ll need to earn 8 Binman skills. There will be plenty of rubbish bins to look out for in Edinburgh for this one.

Finally, make sure nobody gets in the way of your deliveries by earning 10 Trading Paint skills to close out another week of challenges. 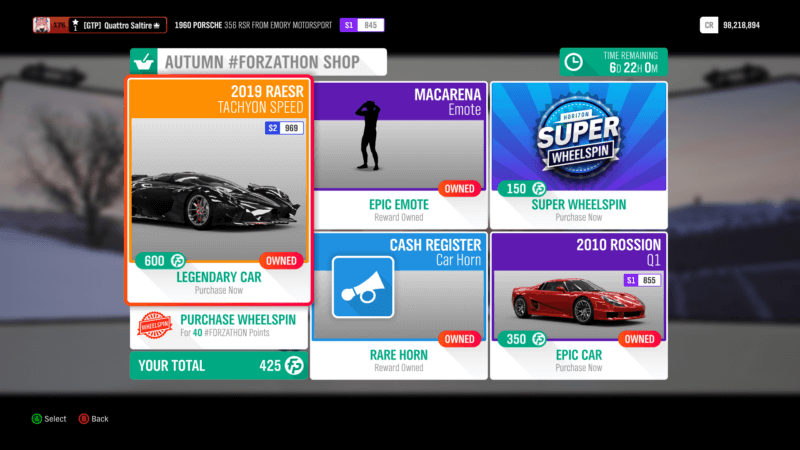 The shop gets electrified this week with the addition of the RAESR Tachyon Speed.

This obscure electric hypercar brings design that blends Formula 1 and the Batmobile. The Tachyon also packs some clever technology to go with its futuristic looks. Under the skin is a bank of six electric motors making a total of 1,250hp. Curiously, the motors will spin to a maximum of just over 3,000rpm, which helps bring a monstrous 3,650lbft of torque.

The Tachyon is a big purchase at 600 Forzathon Points, but this is the opportunity to snap one up if you missed its debut in Series 33.

Another uncommon car this week is the 2010 Rossion Q1. Although the Q1 is classed as an American sports car, dig deep and you’ll find British roots, as the Q1 is a restyled and upgraded version of the Noble M12. Under the hood is the same Ford-derived 3.0-liter, twin-turbocharged V6, tuned to make 453hp. Thanks to a lean weight of under 2,700lb, the Q1 intends to retain the M12’s signature handling for twisty roads.

The Q1 is much cheaper at just 350 FP. For those after a track-focused car without looking to the establishment, this Anglo-American machine ticks all the major boxes.

Novelty items for purchase include the “Macarena” emote and the Cash Register horn.

Forza Horizon 4 Season Change
3 Comments Discuss this post in our forums...
Test Your Badge Knowledge With Our Car Logo Quiz