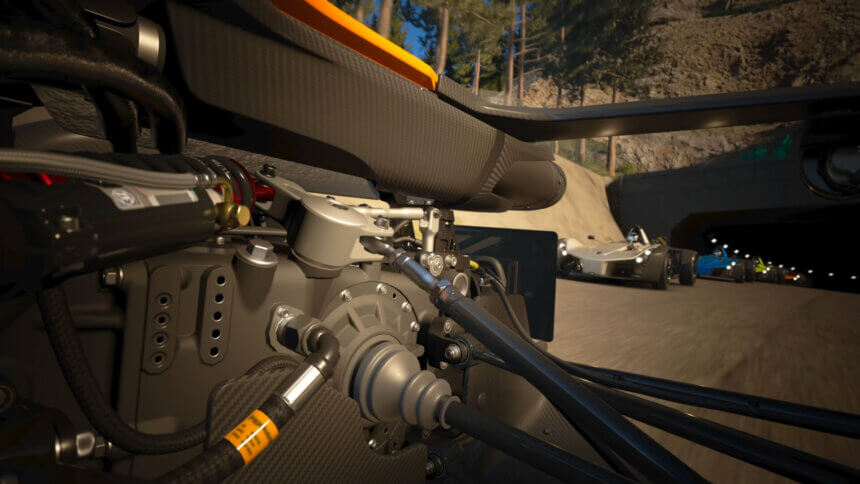 New footage of Gran Turismo 7 appears in a new video on Sony’s official channels promoting the features of the PlayStation 5’s new DualSense controller. It’s only a very short clip, within a very short clip, but it’s the first new video we’ve seen of the game since the initial reveal last year.

It’s been a little while since we heard anything about Gran Turismo 7, and even then it was only to note the game has been pushed back from 2021 to 2022. For game content we have to look back even further, with almost everything we’ve seen of GT7 coming in the first reveal video back in June 2020.

The new DualSense video is all about the controller’s haptic feedback. A considerable step on from the old rumble functions, the clip highlights how you can feel your environment — explosions, rain drops, and road surfaces — through the controller, with games like Bugsnax, Ratchet & Clank: Rift Apart, and Returnal used to show the feature. GT7 also features, with a second of new video footage from the game:

It’s rather familiar footage, as it again features the BAC Mono — a car that will be new to the series with GT7 — at the updated Trial Mountain circuit, but it’s at a slightly different section of the track than before. The previous video showed the cars passing through turn five, but the new clip is a corner earlier, emerging from the turn four tunnel.

Interestingly, if you slow the footage right down with YouTube’s playback speed feature you can see the car’s pushrod-actuated suspension at work. As the car pitches to the left — heading to the racing line — the rear-left unloads, and the pushrod attached to the rear upright pivots the bellcrank. That translates the motion into the laterally mounted ZF Sachs coilover.

While it is only a morsel of new footage, it’s a good hint that Gran Turismo 7 is once again in Sony’s promotional plans for the PlayStation 5. With the game launching in 2022, it’s now between eight and 20 months away and the sooner the marketing starts, the sooner it will arrive!

You can keep up to date on everything to do with GT7, including latest news and known game content, at GTPlanet’s dedicated Gran Turismo 7 Guide page.

DualSense
36 Comments Discuss this post in our forums...
Test Your Badge Knowledge With Our Car Logo Quiz

Gran Turismo Sport 635 May 3 by Andrew Evans
There’s a new set of GT Sport Daily Races starting today, with three new events for players to get to grips with over the next seven days. Each of this…