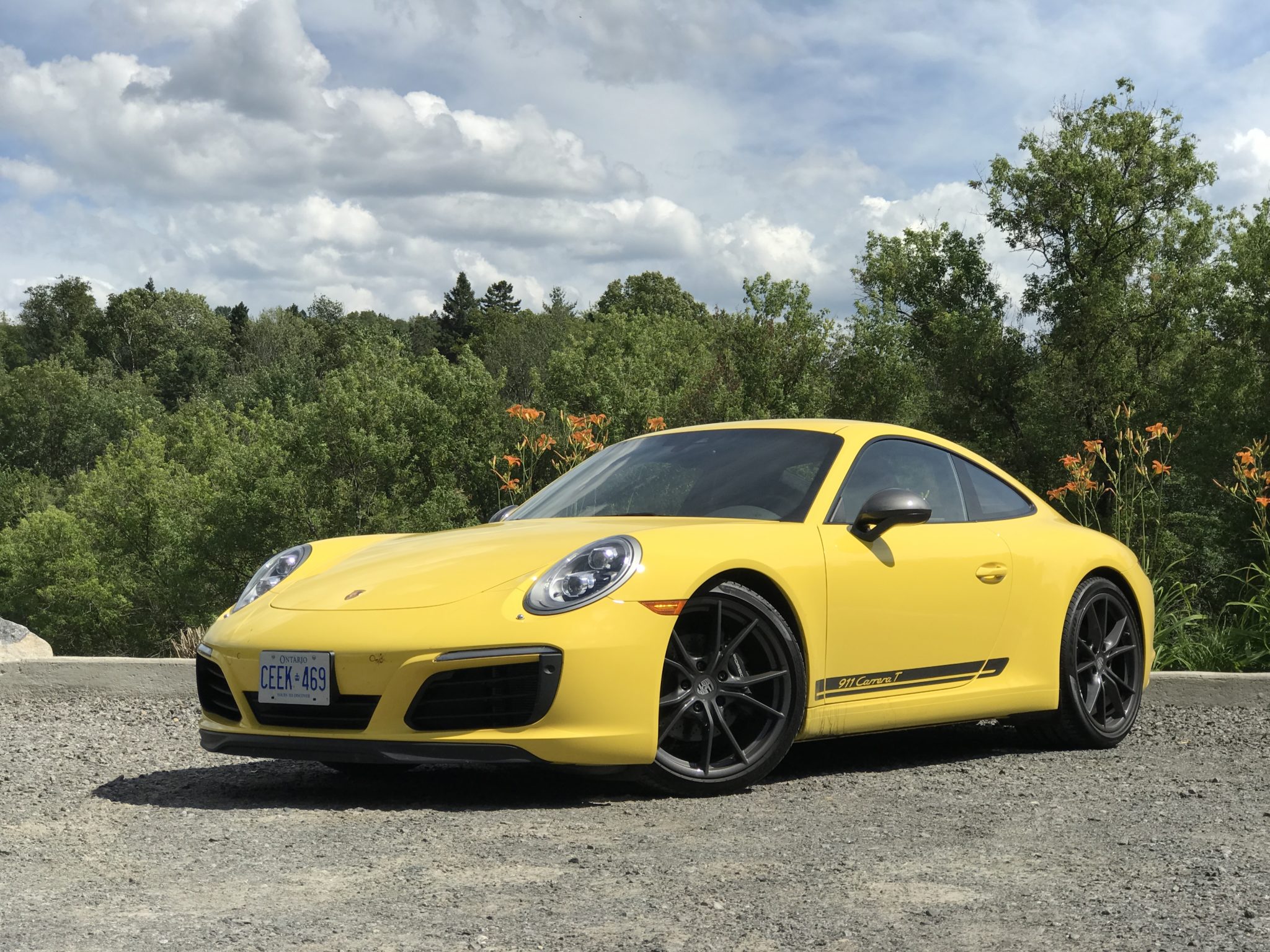 Twenty three. The car you see above, the 2018 911 Carrera T, bumped the model count for Porsche’s quintessential sports car to just shy of two dozen — the ‘Ring-blazing GT3 RS has since hit that mark.

One of the great things about the 911 is that it can be so many things to so many people. According to Porsche, the T continues Stuttgart’s recent trend towards a purer, classic driving experience. It started with the 911 R, a limited-run special edition arguably known more for its red-hot market speculation potential than the pairing of a row-your-own gearbox with a GT3 RS engine.

After that, the facelifted 991.2 GT3 brought the stick back, and doubled-down on the R’s approach with the demure (and very cool) Touring option.

Now Porsche is sprinkling some of that same magic on the “mainstream” portion of the lineup. The T — yep, for “Touring” — cherry-picks the most driver-focused features from elsewhere in the lineup, promising more thrills at a regular production model entry point. 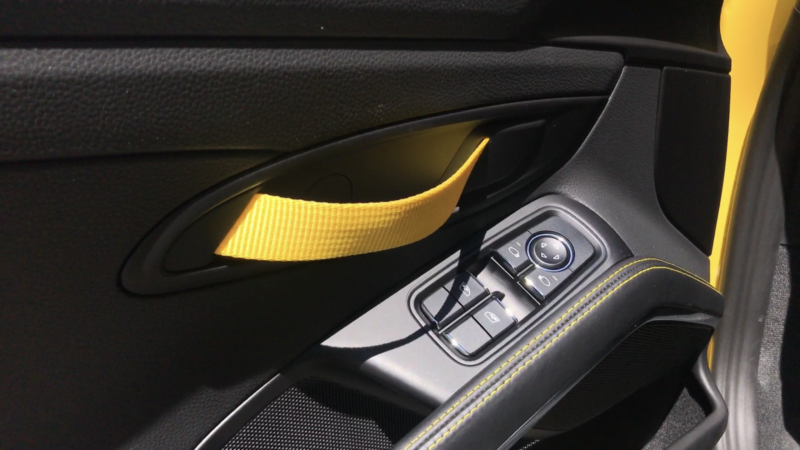 Not exactly. The T occupies the space between the base Carrera and the S. It boasts the engine of the former (370hp and 331lbft, courtesy of a turbo 3.0-liter flat-six), and a price closer to the latter. It’s the lightest model in the range at 3,142lb (1425kg, with the manual), if only by a few pounds. However, that figure includes a handful of features unavailable on the regular Carrera.

In terms of lightweighting, Porsche has replaced the regular windows with the thinner items from the GT Division models. The doors get the same fabric pull-straps as those track monsters too, while the team has “largely reduced” the sound deadening.

The optional sports exhaust from elsewhere in the range is standard fit here, as is the PASM sport suspension, dropping the car 0.4in (10mm). The rear seats become shelves, and the infotainment is gone (though you can spec both back at no extra cost).

The seven-speed manual pairs an LSD with the slightly shorter final drive ratio of the Carrera S. Plump for the PDK option ($4,250 CAD, $3,730 USD), and the LSD is absent. The self-shifter also sticks with the Carrera’s taller 3.44 final drive ratio. Despite this, the PDK will reel off the industry sprint to 60mph in 4.2s — the manual, 4.5s. 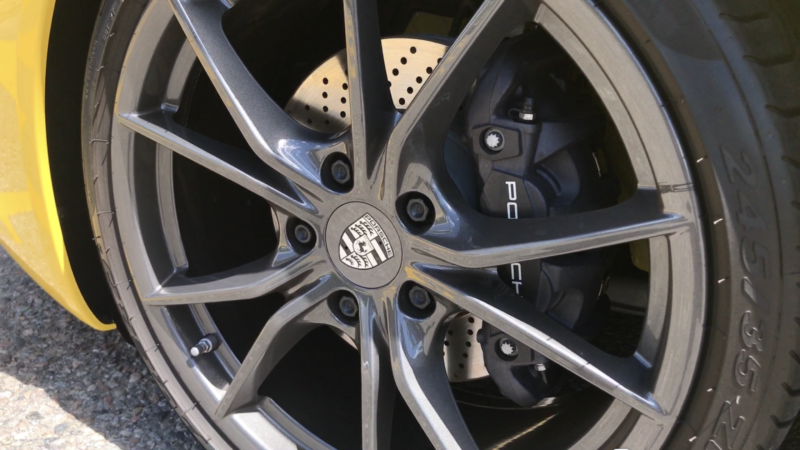 That’s all a bit parts-bin-specialy, isn’t it?

It is. But that’s hardly a bad thing; it’s the 991.2 Carrera Greatest Hits collection.

The T thankfully adopts the GT3 Touring’s demure approach to exterior styling, too. There’s a very subtly different front lip spoiler, and Agate Grey accents in the form of a lower door model designation and side mirrors. The wheels are 20″ Carrera S items by default (in a model-exclusive Titanium Grey), with only the five-spoke Carrera Sports as extra-cost options.

Basically, it’ll blend in for all except the truly tuned-in. If you know, you know.

We tried both optional seats on our test drive. As you’d expect, the 18-way adjustable leather items are supremely comfortable. Those carbon seats are fantastic too, holding this 5’10” driver firmly in place while also proving surprisingly comfy on my turns on the passenger side. 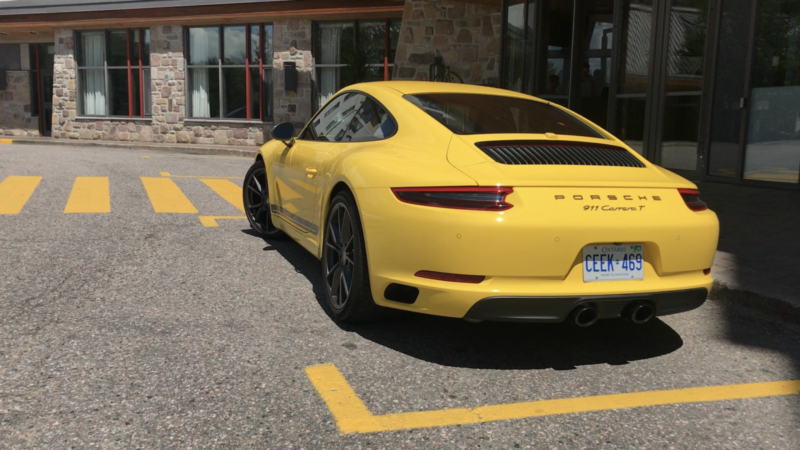 In a word, yes. The 911 T is an excellent all-round companion for road driving. That turbo engine may lack the top-end fizz of the GT3, but crucially, it hasn’t lost its flat-six voice. I’m looking at you, Cayman.

Out on the roads around Mont Tremblant, the 3.0-liter has the big-lunged feel you’d associate with a greater capacity engine. In the best way possible, it barely feels turbocharged, only really letting on during change-ups high in the rev range with a hint of blow-off valve. Helping that feeling is the sheer elasticity of the power. From as low down as 1800rpm in fifth, the 911 T gets a noticeable surge forward. It makes short work of any gap the final highway section of our drive throws at us.

Twist the wheel-mounted dial to Sport and the T unleashes its inner hooligan. Any lift off the throttle unleashes a cavalcade of backfire from the pair of central exhausts. Sure, you’d probably need to test a regular Carrera in parallel to suss out the reduced sound deadening. But as is, there’s enough of the flat six’s signature howl — punctuated by the popcorn effect of any errant stones those sticky 305-section tires throw up against the wheel wells — to let you know you’re in something special.

Funnily enough, click the dial over to Sport+ and the ratatat of the exhaust stops. It’s as if Sport mode is for the showman, whereas the more extreme setting is all business. And right now, business calls for dissecting back roads in Quebec.

Even with the Sport Chrono dial in Normal, the 911 is a firm ride, but never jarring. It doesn’t crash over uneven tarmac; it digests the bumps, flows with them. The 911 T feels in control, while the clear and precise steering ensures you’re a part of the equation.

The brakes — 13in (330mm) with four-piston calipers all-round — inspire confidence from the top of the pedal’s travel. Like most German cars, there’s zero slack here. The middle pedal is a joy to use, even if its most strenuous workout of the day is highway stop-and-go.

Yes, the middle pedal. We started the day in a PDK-equipped car. It was a boon for slipping through the nation’s capital during early morning. Shifts were fast — whip-crackingly so in Sport+ — whether left to the T’s own devices, or called upon via the wheel-mounted paddles.

The seven-speed manual was ours after a poutine-laced lunch in Mont Tremblant (hey, when in Rome!). The clutch pedal’s firm, with a very generous amount of travel. The bite point takes some getting used to: it happens further through the range of motion than I was expecting. It also engages very quickly. Luckily, Porsche’s decision to include auto stop-start in the 911 means it doubles as a stall saver. Disengage the clutch and the engine pops back into life.

The shifter feels good in your palm. It’s the right size and shape, with a noticeable amount of heft without becoming a pain. It slots home positively, with no vagueness. 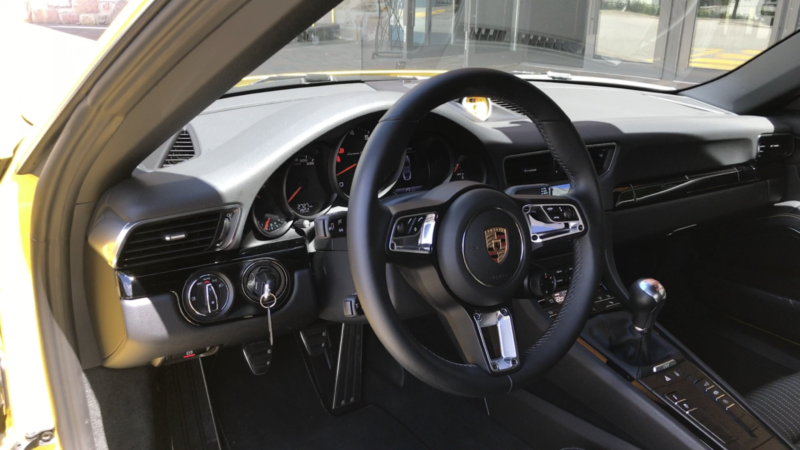 How’s the rest of the package?

The 911 enjoys all the benefits of Porsche now being a high-volume manufacturer.

While the T can technically be had without infotainment, you’d be fooling no-one by choosing the cubby hole instead. The touch-screen is clear and easy to navigate. It offers Bluetooth pairing with Android and Apple devices (the latter includes CarPlay as well). There’s also the dedicated Porsche Connect app, which allows you to access numerous functions of the car, whether you’re in it or not.

A rear camera, as well as proximity sensors on both ends of the car are welcome standards. The 911 is still a wieldy size, but those rear pillars can mask cars on the highway.

Our testers had a variety of options selected. In addition to those upgraded seats, there was adaptive cruise control, heated seats, rear-wheel steering, plus more. There are two optional audio systems as well: a 555-watt Bose option, and an 821-watt Burmester.

A quick browse of the Porsche configurator shows it’s entirely possible — though admittedly unlikely — for prospective buyers to add over half the 911 T’s list price on again in options.

The 911 T still comes with all of the everyday usability and sound ergonomics of any other Carrera. The frunk is huge, and you’ve always got that space where the rear seats used to be. Keep your foot out of it and it’ll even manage 26mpg on the highway. 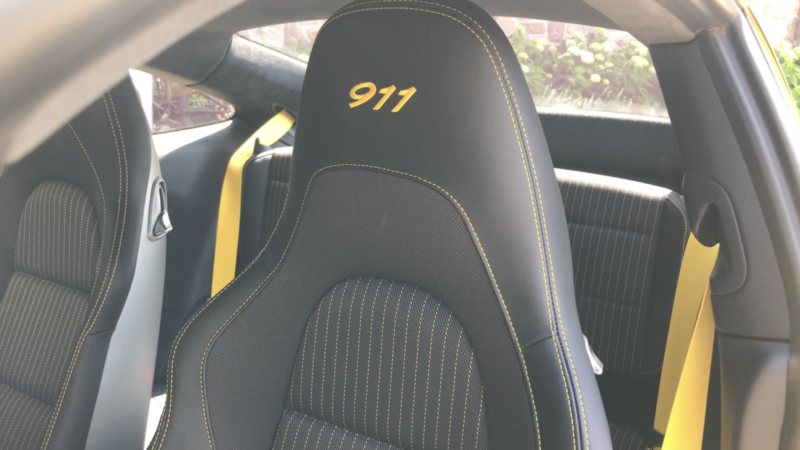 This is a Porsche 911. Anybody looking for a high-end sports car that’s just cracking into the six-figure range is going to consider it. It’s the standard bearer for a reason.

The T’s specific niche makes it a rather unique proposition however. Those looking to walk into a dealership and lay down money for the most expensive model simply because it costs the most will completely ignore this model.

Few cars offer the blend of virtues the 911 does, particular brew of the T included.

There’s Godzilla. The Nissan GT-R is a sledgehammer to the Carrera T’s scalpel, but the 565hp all-paw sports coupe is its own flavor of excitement. If we’re talking icons, one can’t ignore the Corvette. For the T’s price you could bag a 650hp Z06 and enough change to buy a… Cruze (or pocket the difference). The regular Stingray or Grand Sport would both make for a more appropriate foe.

Sticking to two-seaters, the F-Type is worth a look. The V8 is only available with all-wheel drive these days, but not the six-cylinder model. No matter which engine, they’ll both offer even more gratuitous pops and bangs than the 911 in Sport mode.

The BMW M4 shouldn’t be dismissed either. The Competition package is one thing, while the limited-run CS could be the closest option in spirit.

But perhaps the biggest threat to the 911 T comes from within the family. A Carrera S with the Sport package rings in at less than $10K more than a T with the rear wheel steering. Sure, it’s heavier, but the 50lb or so comes with 50 additional ponies in the tail. 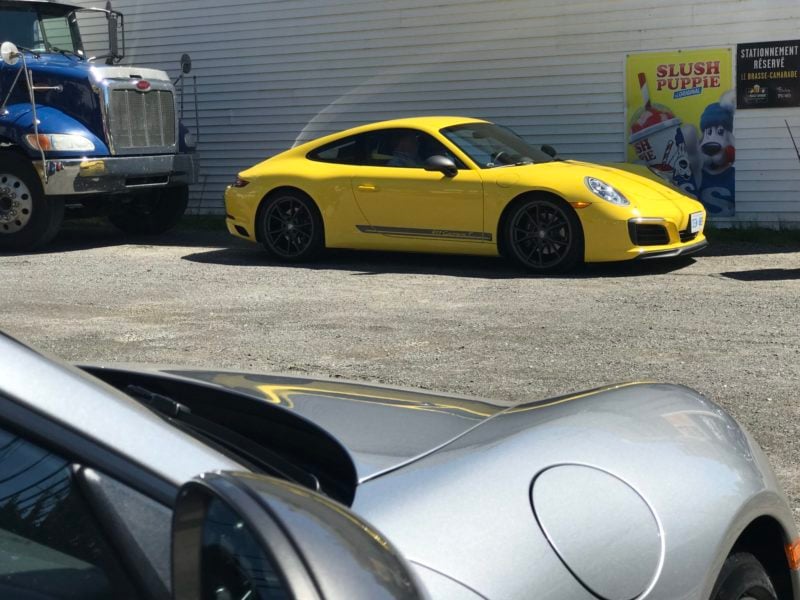 As the collection of competitors listed above shows, if you play the numbers game, the 911 T isn’t a definite victor. But to dismiss the T on account of its numbers is missing the point.

It’s true, the T is more Carrera than cut-price GT3. But its humbler roots bestow it a level of everyday accessibility the GT3 doesn’t have. It retains just a soupçon of edge, of that urge to peel off on a drive just for the sheer pleasure it provides.

Is it a “settler”, a car someone buys when they can’t swing what they really want? Maybe. But that’s a bit like dismissing the Cayman as the car people only buy when they can’t afford a 911.

During the final portion of our drive, we had found our groove. We were making swift progress, and every car we caught up to very kindly let us pass. As we wound our way through the Laurentians, a seasoned motorcycle rider quickly filled the rearview.

After a few corners, it became clear we couldn’t match his original pace. We slowed down, but instead of passing, our new friend matched us. We picked back up, settling into that same addictive rhythm as before, with the familiar rise and fall of the flat-six’s song bouncing off the trees.

That guy got it. 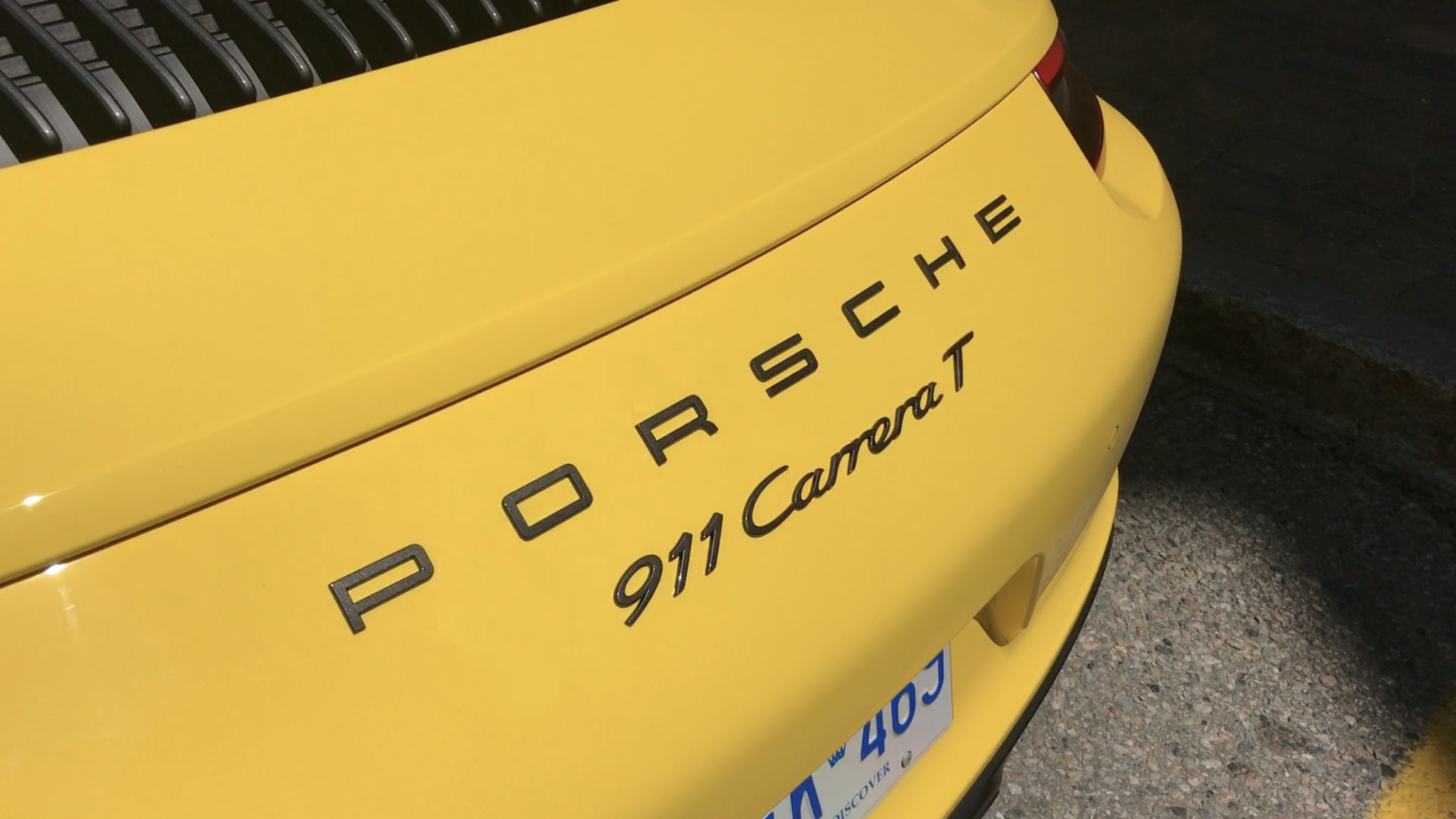 Accel times are not the point here. Every aspect feels well-matched with the others, with either transmission.
Ride & Handling

Flows over the road with a firm but controlled feel. Great sense of balance, consistent and clean steering.
Space & Comfort

It’s a two-seat 911 without a rollcage. Feels spacious up front and plenty of storage space. Continent crusher.
Equipment

The blend of performance, feel-good factor, and quality ain’t cheap, but it’s also an elusive one. Just be wary of the options list.