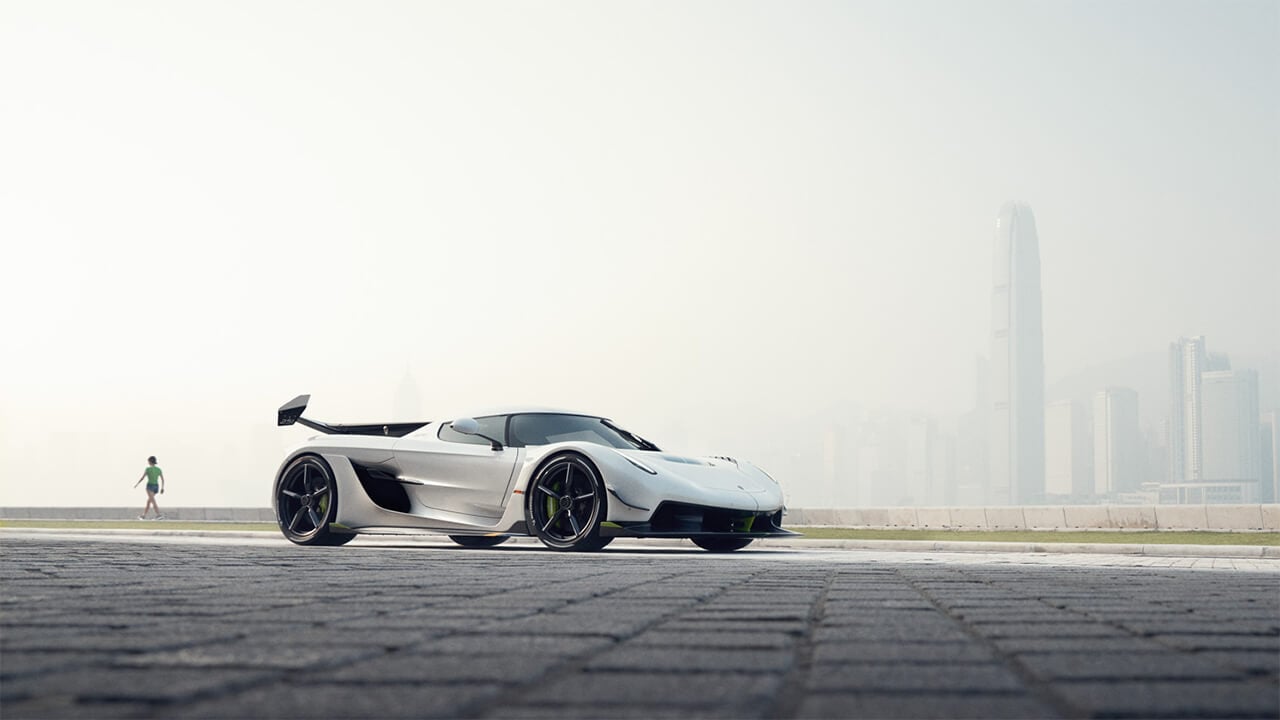 According to a now-deleted Tweet from the official Forza Horizon 4 account, Swedish marque Koenigsegg’s latest hypercar is heading to the game — and soon.

The social media post appeared for the briefest of moments yesterday, but it was long enough for several Twitter users to spot the notification. It vanished again pretty soon after, though a few people were able to grab screenshots: 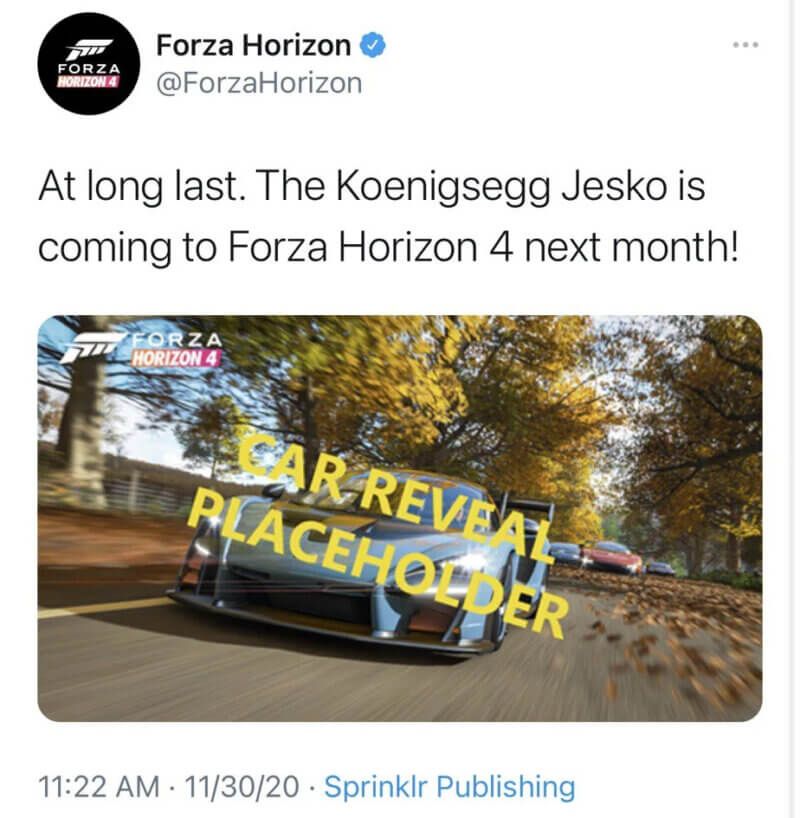 As you can tell from the interesting choice of illustration, this rather looks like a post that Playground Games’s social media consultancy, Sprinklr, intended to schedule but instead accidentally published. However, the key information remains: the Koenigsegg Jesko is coming to FH4.

If you’re not familiar with the Jesko, you should be. After all the company’s founder, Christian von Koenigsegg, chose to name this particular car after his own father, so it’s a pretty big deal.

Koenigsegg intends the Jesko to be an extreme track toy, with revisions to the suspension and braking system, and a focus on downforce. In addition to the regular Jesko, there’s also an “Absolut” model which does away with that giant rear wing in order to hit the highest top speed it can.

Thanks to more than 1,280hp under the rear cover — or 1,603hp on E85 fuel — that top speed is thought to be around 300mph, making it faster than its Agera RS sibling. That should come in handy for FH4’s speed traps.

This is actually the second time that the Jesko name has appeared in connection with Forza. In June 2019, Turn 10 studio head Dan Greenawalt Tweeted “welcome to Turn 10”, along with some images of the Jesko. At the time it seemed likely that the Jesko would arrive in the next Forza Motorsport title, but now it looks like Horizon will get it first — with the rebooted Forza Motorsport a long way from completion.

As for when the Jesko will arrive, the now-deleted message quite clearly states “next month”. However, while the Tweet appeared in November, it clearly wasn’t intended to public consumption just yet. That probably means we’ll see the car in January and Series 31.

Gary Slater · Dec 1, 2020· Comments
January may be in the closing stretches, but Winter has returned for another round in Forza Horizon 4. Through the blizzards and the snow drifts, everyone at the UK festival continues to battle through the elements in order to seek out the latest events.

Gary Slater · Dec 1, 2020· Comments
As the rain begins to pour across the UK, a brand new Autumn season is revving up to take charge at the festival in Forza Horizon 4. Players are prepared to brave the muddy elements as there’s more events waiting to be conquered.

Gary Slater · Dec 1, 2020· Comments
A new Summer season has rolled around again to kick off a fresh series in Forza Horizon 4. We’re in the opening stage of Series 57, with another round of prizes waiting to be claimed during the next four weeks.

Gary Slater · Dec 1, 2020· Comments
It’s a new year, and Forza Horizon 4 is kicking off 2023 with a brand new Spring season at the UK festival. We’re also saying goodbye to Series 56 this week, with a final dash to pick up the remaining cars waiting to be claimed.

Gary Slater · Dec 1, 2020· Comments
Winter has settled across the UK once more, as festivalgoers are preparing to see off 2022 and welcome the new year in Forza Horizon 4. Along with the Hogmanay festivities, players are digging amongst the snow to grab the latest batch of prizes before 2023 arrives.

Gary Slater · Dec 1, 2020· Comments
Autumn takes a hold over the UK for another week in Forza Horizon 4 during this Christmas period. If you’re unable to make it to the festivities in Mexico, there’s still plenty of activities to keep you busy from wrapping presents.

Gary Slater · Dec 1, 2020· Comments
The countdown to Christmas is on, and Forza Horizon 4 is kicking off the preparations with a brand new Summer season. We’re now into Series 56, meaning that there is a freshly baked remix of content across the festival that will help see players into the new year over the next four weeks.

Gary Slater · Dec 1, 2020· Comments
The festive spirit is kicking up a gear as attention begins to turn towards the holidays. To help out, the UK festival is welcoming in a new Spring season to Forza Horizon 4. We’re also into the last season of Series 55, with a last push for the remaining content for this week.

Gary Slater · Dec 1, 2020· Comments
As 2022 begins to enter the closing stages, Forza Horizon 4 welcomes December with an apt Winter season. With festive plans beginning to take shape, players are continuing to hunt down the latest events.