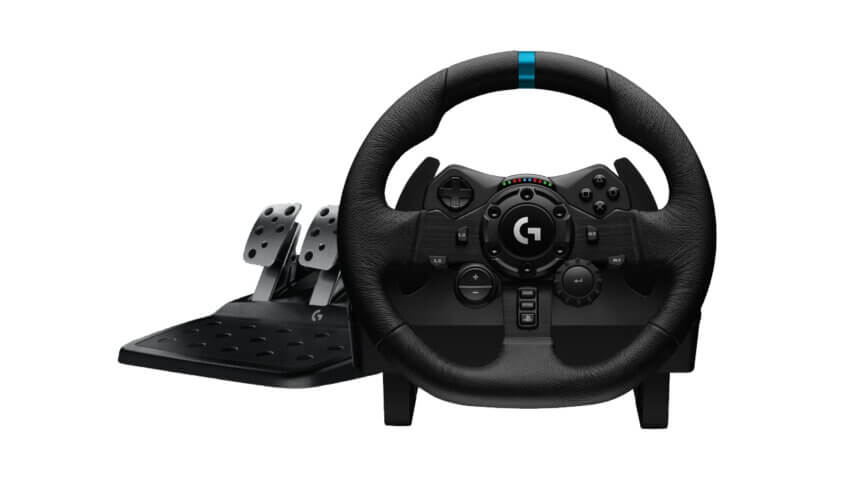 Right on cue, Logitech has revealed its new console and PC racing wheel, which it calls the G923.

As you might expect from the name, and from the image above, the G923 is an updated version of the G29 and G920 wheel that first arrived in 2015. In terms of physical dimensions, both the wheel and the included pedal set are identical, and even come in at the same weight, though there are a few obvious changes.

Regardless of whether you pick up the Sony-compatible wheel or the Microsoft-compatible wheel, there are very few physical differences now. The old G920 didn’t have the LED rev counter, or the multifunction dial and selector you’d find on the G29. These now appear on the G923, meaning that the only differences are the button labels and the console-specific navigation buttons on the bottom spoke; you will still need to be careful to pick up the correct wheel for your console.

The changes come under the skin, with a new force feedback technology that Logitech calls “Trueforce”. According to the brand, this is the first “high definition” force feedback system, developed from machines used in the field of surgery.

Robot-assisted minimally invasive surgery (RMIS) uses haptic force feedback systems. This allows the surgeons operating the robot to feel what they’re doing, even to the point of determining what tissues they’re touching — despite not being in the same room as the patient.

Most existing wheels — including the G29/G920 — use an approximation system. This interprets game response to deliver force feedback according to a specific profile at any given moment. Logitech says that, while this was useful with early, low bandwidth USB technology, the Trueforce system is designed with a much higher bandwidth in mind and can deliver truly accurate force feedback.

Only a limited number of games support Trueforce at the moment — three, in fact. They’re Assetto Corsa Competizione and GRID on all three platforms, and Gran Turismo Sport on PS4.

“For the last few years, we’ve been working with sim drivers, and professional race car drivers to develop a full-featured, realistic driving experience like no other. With TRUEFORCE you really get to feel the road, along with all the subtle features of the race car. It truly elevates the experience, and everyone we’ve had try it always walks away with a smile!”

There’s other small changes too, with a programmable dual clutch/launch control pedal (we assume for PC only, via the G Hub), and a new progressive spring in the brake pedal. Logitech prices the G923 at around the same point as the old G29, coming in at $399.99 (£349.99/€399.00), and as yet there’s no specific shifter available.

The G923 will be available this month, and it will work with both current-gen consoles and next-gen ones too — including PS5.

Logitech
179 Comments Discuss this post in our forums...
Test Your Badge Knowledge With Our Car Logo Quiz

WRC Series 17 Apr 13 by Andrew Evans
Nacon and KT Racing have announced the next entry in the WRC series, the official game of the World Rally Championship. WRC 10 will arrive later this year, and brings…

Gran Turismo Series 39 Apr 12 by Andrew Evans
As players are waiting for some good news around PlayStation 5’s Gran Turismo 7, a development over the weekend could mean that Gran Turismo will also head to the world…

Esports 50 Apr 12 by Andrew Evans
Just like the real thing, F1 Esports has something of a gender imbalance. In four seasons to date, no female driver has ever taken part in an official F1 Esports…

Gran Turismo Sport 512 Apr 12 by Andrew Evans
A new week means a new set of GT Sport Daily Races to get to grips with, and this week’s trio of events brings a mixture of pace to satisfy…

Forza Horizon 4 4 Apr 8 by Gary Slater
The seasonal wheels keep turning on Forza Horizon 4 this week, as another Summer season is officially underway. It’s also the kickoff for Series 34, bringing the first week of…