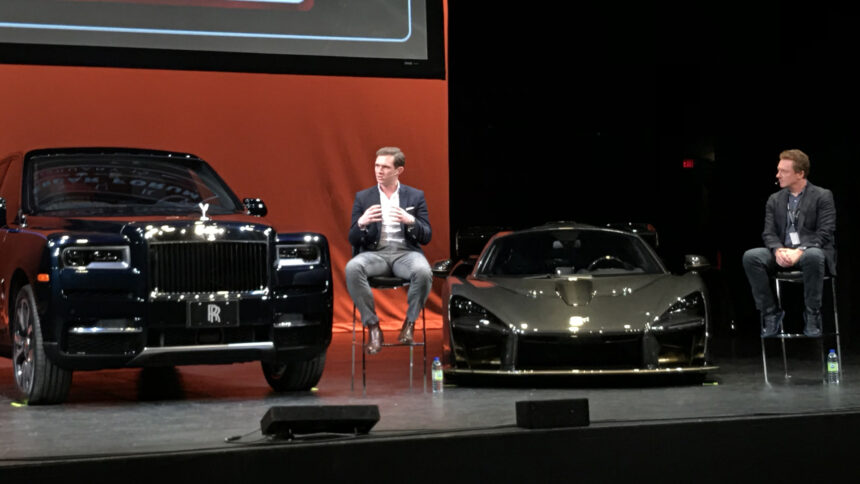 If you’ve been holding out for a McLaren-branded high-rider, we’ve got bad news for you. Or rather Mark Roberts, head of design at McLaren Automotive, does.

Roberts was in town in Toronto last week as one of the speakers in the first Luxury Supercar Forum, held the day before the Canadian International AutoShow Media Day. He shared the stage with Alex Innes, head of coach build design at Rolls-Royce, as well as Majid Al Attar, the man that penned the Devel Sixteen. As talk turned to the Cullinan beside Innes, host Townsend Bell asked Roberts if McLaren would be joining its countrymen in the lucrative crossover realm.

“I can easily answer that and say no,” was Roberts response. “We really do deliver on the ultimate driving experience. For us it means no compromise. An SUV doesn’t allow us to deliver on that.”

It’s a bold strategy from the Woking-based marque. Roberts also mentioned the company’s product offensive, with plans for 18 new models between now and 2025. For none to be part of the hot market segment would actually make McLaren one of the only crossover holdouts in the business.

It’d certainly be the only British company to do so. Rolls of course has the Cullinan, whereas Bentley’s already breaking records with its Bentayga. Meanwhile Aston Martin has been testing its upcoming DBX on rally stages. Even Lotus, now under the same Geely umbrella as Volvo, will get a crossover in the near future.

Elsewhere in the luxury world, Ferrari has confirmed a high-rider by the name of Purosangue (Italian for thoroughbred) is coming. Its erstwhile competitor Lamborghini has already released the Urus onto the world’s roads, and will even take it racing next year.

Keeping a crossover off its portfolio puts McLaren in rarified air. Bugatti and Koenigsegg have made similar statements recently, and it seems a safe bet Horacio Pagani isn’t jacking up a Huayra roadster, either.

Roberts teased future models during the discussion, including a successor for the P1 — not to be confused with the Senna or Speedtail — as well as an all-electric model. He couldn’t give an exact time frame for either, but the former will be part of the 18-model plan, so expect it before 2025.

Automotive News 53 Oct 19 by Andrew Evans
The chase for the fastest ever production car just got a lot spicier as SSC has recaptured the crown it lost in 2010. In regaining the record, SSC has also…