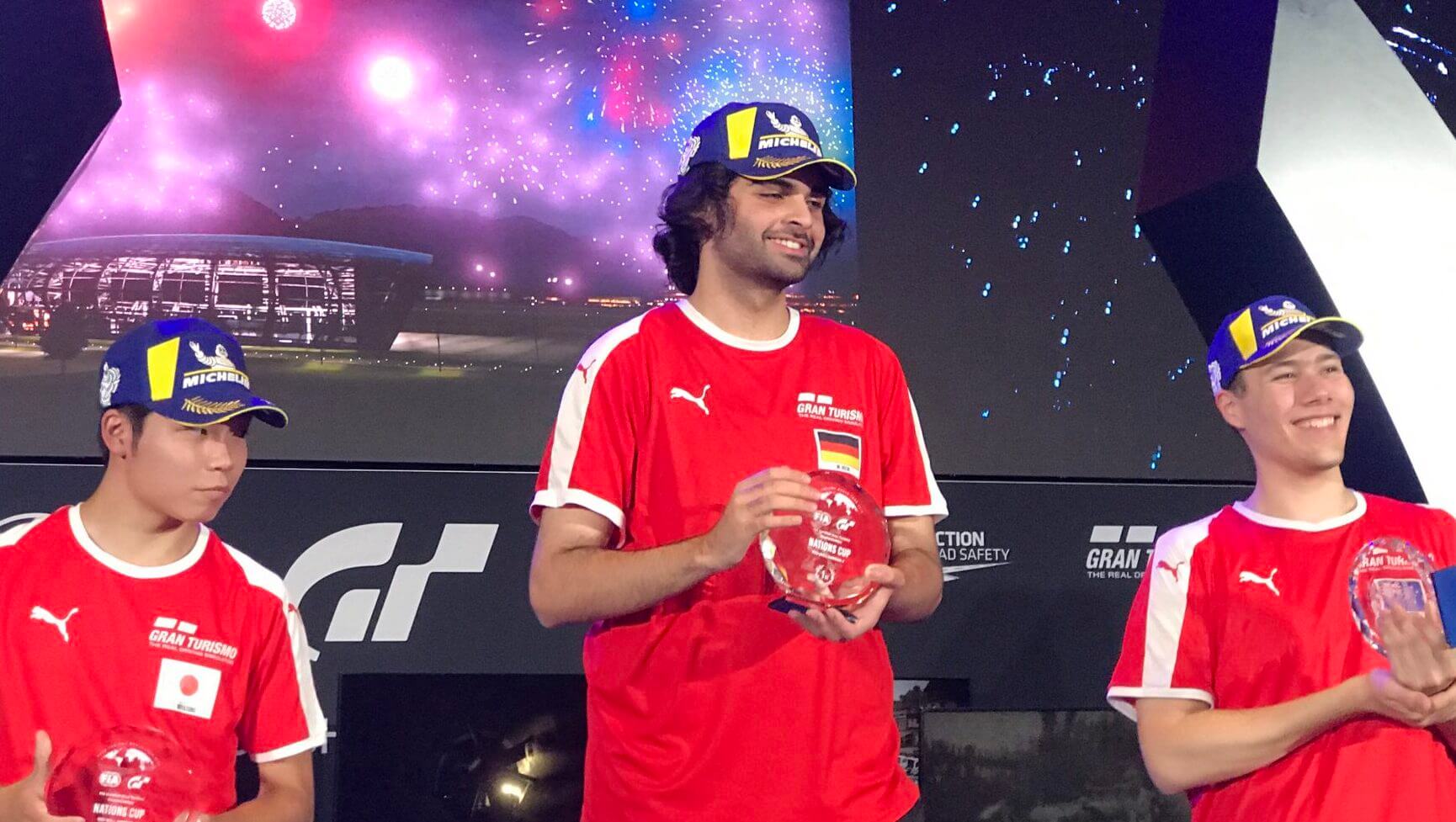 Turkish-German driver Mikail Hizal has won the Nations Cup event at the World Tour in Salzburg, claiming his spot in the FIA Online Championship final in Monaco in November.

Hizal finally converted a World Tour appearance to victory at the Red Bull Hangar-7 venue in Austria with two commanding performances. Previously an eternal bridesmaid, with a second place in both Paris and New York, he’s finally made it to the top step with one event to spare.

The racing action started with a qualifying session. This used the traditional final race combo, which here in Austria would be the Red Bull X2019 Competition at the fast Autodromo Nazionale Monza.

With that out of the way, the top six drivers went for a superpole shootout. Coming out on top there was Takumi Miyazono, the nearly-man from New York with the unusual race strategy. He took pole from Mikail Hizal by just under 0.2s. 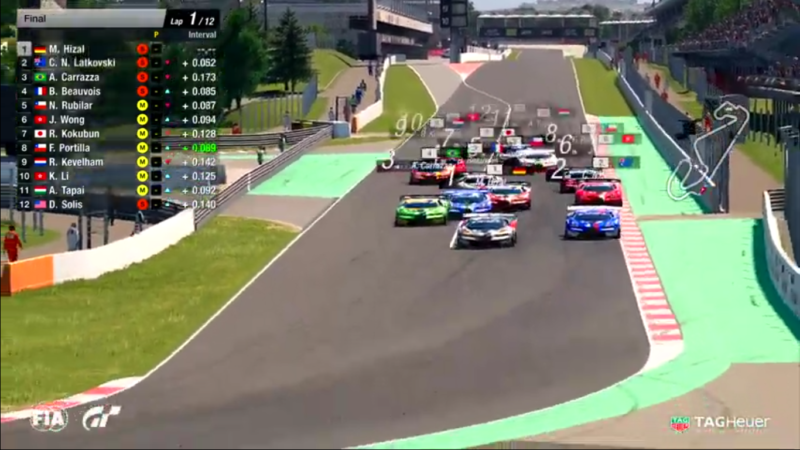 The opening spell of the first race was a little on the busy side — fairly typical with high speed cars aiming for low speed corners. Cody Latkovski was almost immediately alongside Hizal as the cars entered turn one, but Hizal held firm and ran the long way round turn three to hold his position.

Slightly further back, Daniel Solis was caught out in the first braking zone and, despite trying to take evasive action, ended up collecting Rick Kevelham’s Bugatti. The American saw a three second penalty just to add to his woes.

Another driver seeing three seconds from the stewards was Fabian Portilla. The Chilean ran too deep into turn five and speared into Ryota Kokubun. In a busy lap for the officials, Adriano Carrazza also got a one second wrist-slap after tapping Latkovski out of the way in turn 10.

That flurry of paint trading soon brought the first pit stops. Kokubun, Kevelham, Solis, and Adam Tapai all pitted for soft tires. In Solis’s case that was a bit unusual, as he’d started on the same tires and all cars must use both available compounds. The following lap Portilla, Nicolas Rubilar, Jonathan Wong, and Kin Long Li all also switched from medium to soft.

Leader Hizal switched the other way at half distance. Having started on the softs, he swapped for medium tires along with Carrazza and Baptiste Beauvois, while Latkovski stayed out for another lap.

However, nothing could stop Hizal. He coasted home with five seconds to spare from Latkovski. Carrazza sat third and, making the right tire call, Wong in fourth. Kevelham and Solis never recovered from the turn one mishap, and were eliminated. 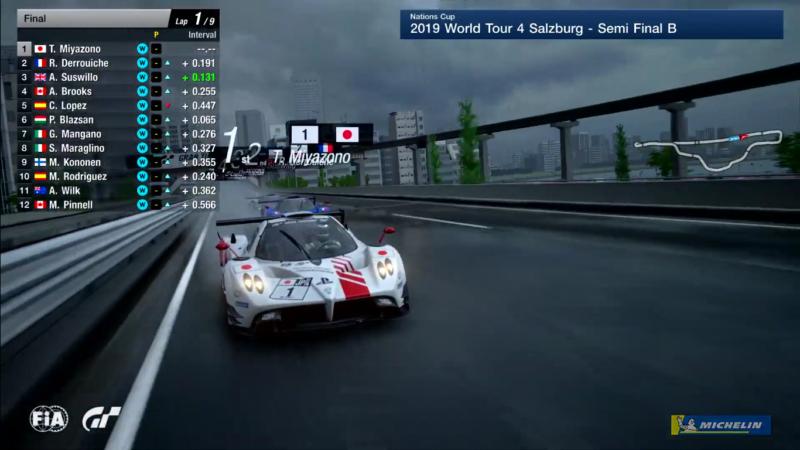 The second race headed to a new circuit variant for GT Sport, with a wet Tokyo circuit — specifically the outer loop (clockwise) of the central circuit.

One thing that the drivers wouldn’t have to worry about here would be pit stops. All 12 cars used intermediate wet tires and fuel was not an issue. However everything else would be a worry — including the 700hp track day special car and the rolling start inside the bone dry tunnel…

With slipstreaming the key here, Adam Suswillo and Rayan Derrouiche soon found themselves on the tail of pole man Miyazono. Even approaching the first corner, the trio were three wide, but survived the complex intact. That wasn’t necessarily the case throughout the field, as both Giorgio Mangano and Manuel Rodriguez picked up early penalties for contact — putting them at risk of dropping off the vacuum of the cars ahead.

Soon the race at the front became a three-man show, with Miyazono, Derrouiche, and Suswillo each taking it in turns to slide up into the lead at 208mph. However the squabbling slowly brought further cars into the fray. What had looked like a trio became a sextet, until Miyazono broke free of the tow and worked his way off down the road.

The first turn became the focal point for the overtaking, with the order changing lap on lap. As Suswillo and Derrouiche tangled for second, Andrew Brooks overtook both to take the spot.

However the crucial incident came on the final lap. Derrouiche, a shade late on the brakes, tagged Suswillo and sent the Brit into the back of Brooks. Both managed to hold onto their cars but the Frenchman impeded his own progress to allow Coque Lopez that chance to slip into the final qualification spot. Having been in the top four all race, Derrouiche was now fifth.

That’s the way it ended, with Miyazono comfortable from Brooks, Suswillo, and Lopez. Derrouiche missed out by just 0.66s and would need the repechage. Eliminated altogether were Patrik Blazsan and Markus Kononen. 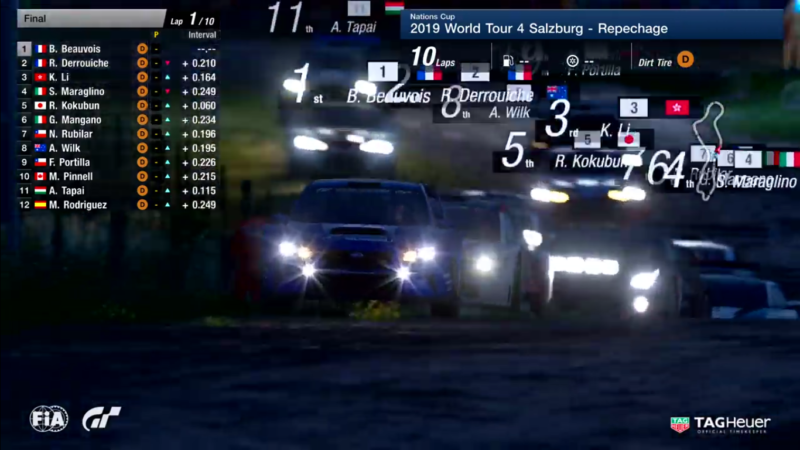 The World Tour Repechage events have gained something of a reputation for randomness. They’re often unusual combinations not seen in regular online races, and a slight suspension of the rules leads to rather fraught races.

Despite Salzburg’s event drawing deep from that same well, it was almost anything but. The start had some aspects of chaos but it very quickly settled down as the four cars at the head of the field simply established absolute dominance.

In short order Derrouiche, Beauvois, Li, and Salvatore Maraglino just dragged ahead of the rest. The gap grew by a second a lap between Maraglino and countryman Mangano almost like clockwork, to close to 10s by the end of the race.

These four drivers thus booked their place in the event final, while the others will need to look to Tokyo for their next chance at a World Tour win. 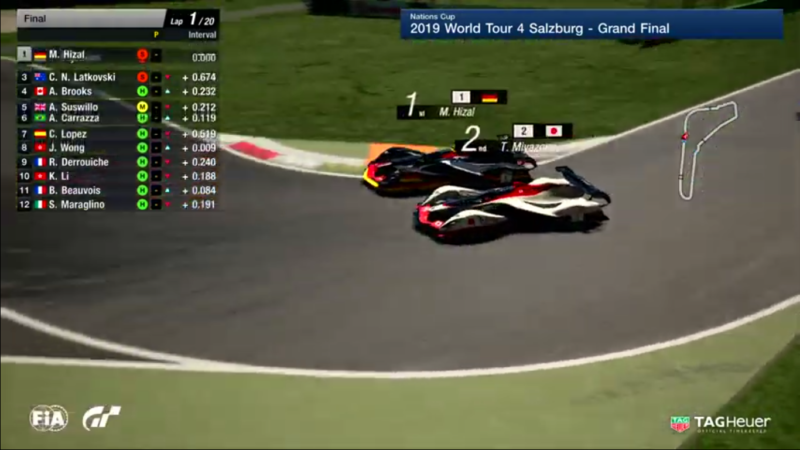 With Hizal and Miyazono winning their semi-finals with comfortable margins, they were the favorites going into the final — and Miyazono’s earlier pole position lap had laid down a marker.

Only the front two and Latkovski in third chose to start on soft tires — with all three required in the race — as Suswillo in the middle of the pack was the only driver to go for the medium tires.

Monza being Monza, there was of course a first turn incident. Hizal and Miyazono came together through Rettifilo, but both came out unscathed and in their original positions. Brooks all but missed the chicane out, taking evasive action but remaining fourth, while Suswillo lost out as he was forced onto the gravel on the outside and dropped to last.

Unsurprisingly all but two of the hard tire drivers chose to take their pit stop immediately. Six cars hit the pits at once to shuck the slow rubber, with all but Derrouiche opting for mediums, as the Frenchman took soft tires. Carrazza followed with a hard to medium swap a lap later.

With all the pit stops going on, the lead three had made a space for themselves up front. Suswillo sat fourth, six seconds back, as the obstacles between him and the lead pack had all moved out of the way. Making the most time though was Hizal, pulling 2.5s out on Miyazono.

Brooks pulled what may be the pass of the weekend on Maraglino at the della Roggia chicane, making the tire advantage pay off. However the action soon settled down as the drivers all moved into the mid-phase of their respective tire stints.

The first lead car to change was, unusually, Latkovski. He came in at the end of lap eight to swap soft for hard. Again, it wasn’t much of a surprise to see him jumping into the pit lane to swap them for medium tires on the very next lap. Suswillo, glued to the Australian’s rear wing, followed him in to switch the other way.

Meanwhile at the front, the pit stops offered the opportunity for a change of lead. Hizal and Miyazono both pitted at the end of lap nine to change soft for medium, but where Hizal took on more fuel, the Japanese driver did not. With the long refueling times, this swung the pendulum Miyazono’s way. This turned a three-second deficit into a 1.5-second advantage.

Soon the drivers were making their second and final — or third and final in the case of Lopez and Brooks — stop, to fuel to the end and change to soft tires. However the lead two were on a different strategy and Hizal was not closing on Miyazono.

Brooks’s race came to an abrupt end on lap 15. Exiting della Roggia, where he’d earlier made such a good pass, he encountered a slow-moving Wong after some paint trading with Beauvois. The Canadian collided with the rear of the Hong Kong car and span down the field to last.

Running low on fuel — just four liters left — Miyazono was forced to pit for hard tires on lap 15. This meant five laps on the slowest tires that most people had only used for one or two, and an age waiting for the extra 30 liters of fuel to dribble into the X2019’s tank.

Hizal, who’d taken on fuel in his first stop, could afford to wait a little longer, and came in for his final stop at the end of lap 17. On went the hated hard tires, and with just a 20-liter refill he was soon out and on his way.

That left the front three — Hizal, Miyazono, and Latkovski — running with five second gaps to one another, with Suswillo a further five back in fourth. Latkovski, with a two-grade tire advantage was able to take some time out of Miyazono, but the front four finished in the same order, with Coque Lopez just behind in fifth.

The action now moves on to Tokyo in October, with three names confirmed for the final in Monaco in November: Nicolas Rubilar, Igor Fraga (twice), and now Mikail Hizal.