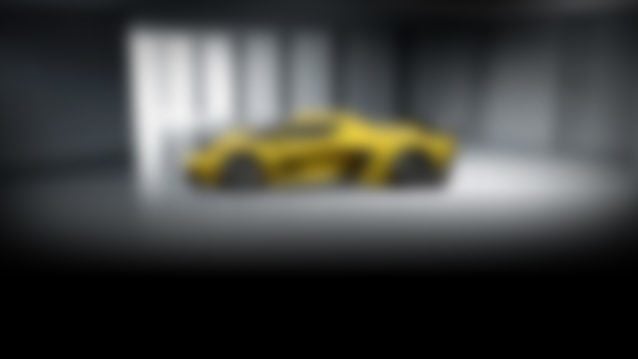 This month started with news of the Vision Gran Turismo program getting back into gear. Famed Italian design house Pininfarina will be working with F1 and CART champion Emerson Fittipaldi on the EF7 Vision Gran Turismo, the first addition to the project in over a year.

The original EF7 teaser was a peak over the new supercar’s shoulder. The official Fittipaldi Motors website has a countdown for the Geneva Motor Show, giving us a clearer idea of the car’s overall proportions, via a much less clear image. We can say, with 100% certainty, that the car is in fact yellow.

While it doesn’t tell us much more, the blurry image does hint at the EF7’s drivetrain. The passenger cell is quite far forward, essentially confirming the car’s midship layout. The official statement accompanying the car’s announcement said Fittipaldi would “apply all his track knowledge on creating a new experience”, so a racing-inspired mid-engine layout was expected.

German firm HWA is taking care of the engineering side of the project. HWA, being the motorsports spin-off of AMG, has plenty of history running three-pointed star vehicles in a variety of race series, notably DTM. However, with exception to Formula 3, the company currently deals with front-engine rear-drive cars. The question of what, if anything, the EF7’s mid-engine platform is based off will likely remain unanswered until the doors open in Geneva on March 7.

As for when players will be able to drive the car in Gran Turismo, that too has yet to be made clear. GT Sport is expected to release at some point in 2017, but strangely, the game wasn’t specifically named in the EF7 press release (only “the Gran Turismo series”). We’ll be keeping our eyes on the Motor Show for more news on the car.

Andrew Evans · Feb 3, 2017· Comments
An announcement on the PlayStation Blog Japan has revealed that Gran Turismo 7 will be one of the games available in a special PlayStation VR2 event in Tokyo next month.

Andrew Evans · Feb 3, 2017· Comments
There’s a new set of Gran Turismo 7 Daily Races now available for the next seven days, and an entirely new experience in one of the three events as dynamic weather makes its online debut.

Andrew Evans · Feb 3, 2017· Comments
Kazunori Yamauchi has confirmed via a post on the PlayStation Blog that Gran Turismo 7 will come with almost total support for the PlayStation VR2 hardware when it launches on Feburary 22.

Andrew Evans · Feb 3, 2017· Comments
PlayStation has published its annual top 20s of games downloaded from the PlayStation Store, and Gran Turismo 7 ranks among the highest — at least on PlayStation 5.

Andrew Evans · Feb 3, 2017· Comments
The schedule for the next stage of the Gran Turismo 7 Online Championship has been revealed, with another short Exhibition Series to occupy players ahead of the official 2023 season.