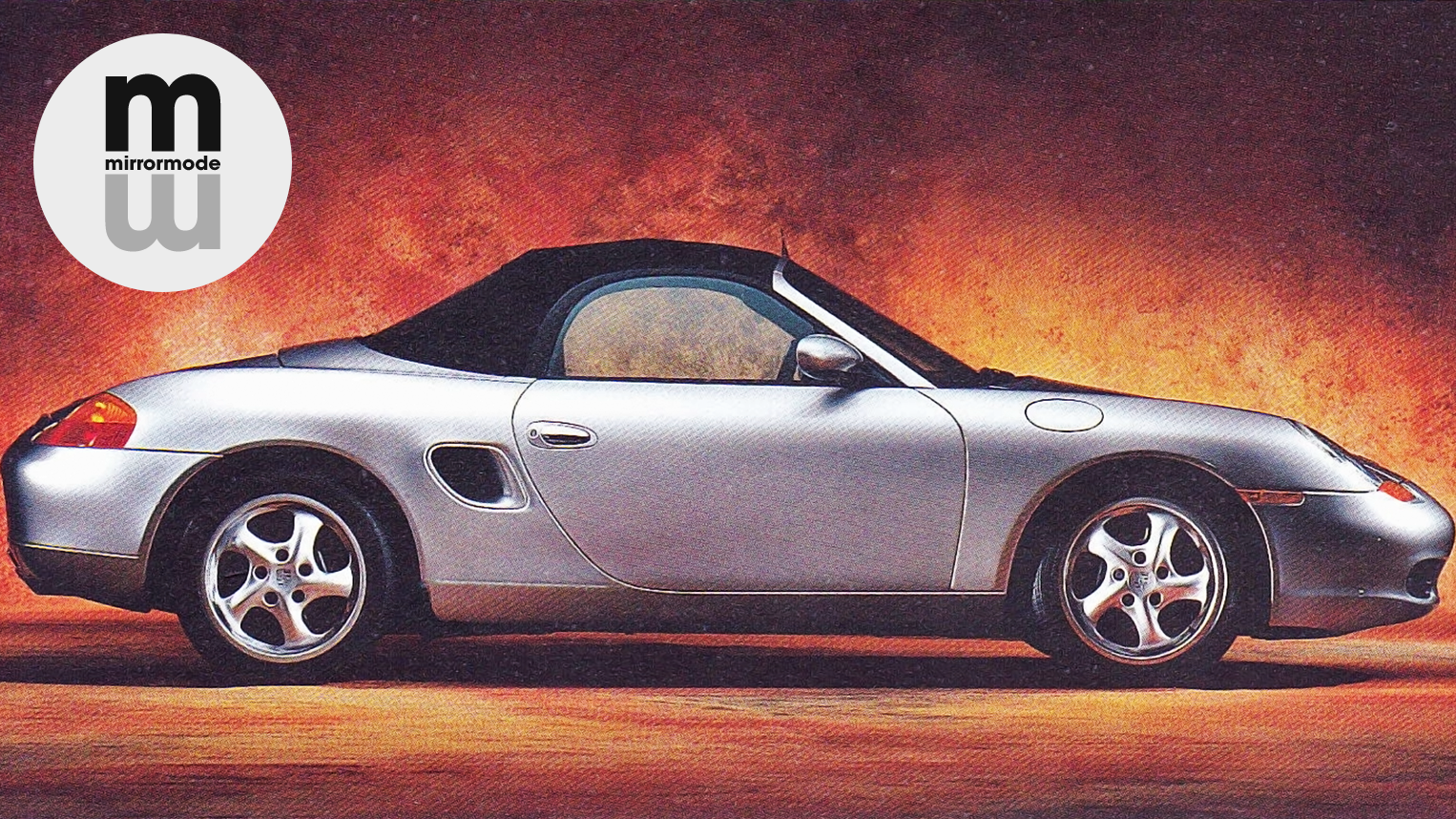 Welcome to Mirror Mode, GTPlanet’s series that shines a spotlight on retro racing games. In this installment, we take a look at one of the original PlayStation’s forgotten first-party racers.

The year was 1997. Nobody had heard of Gran Turismo yet, and they wouldn’t until the following January. Nevertheless, racing games were booming, and Sony firmly established the PlayStation as the destination for the genre with the likes of Formula 1, Wipeout 2097, and Rage Racer.

1997 also gave us some pretty remarkable cars. The sixth-generation Honda Accord debuted, which would later lead to one of our favorite sleeper sport saloons of the decade. So did the E46 3 Series and the once iconic, now tragically lame Plymouth Prowler. And last but certainly not least, Porsche finished rolling out the Boxster around the world.

For the younger among us, it’s difficult to visualize a Porsche lineup that doesn’t include the Boxster. But the early ‘90s were not kind to the famed German marque, mostly thanks to an aged portfolio and an urgent need of production line efficiency. Porsche sold just 14,000 models globally in 1993 according to The New York Times, with a paltry 3,000 of them hailing from the States.

A change was long overdue, and Porsche was keen to see the writing on the wall. It acted swiftly. Introduced at the 1993 Detroit Auto Show, the Boxster concept was a new Porsche for a new generation, albeit one inspired by the 550 Spider of legend. The production version bowed three years later. Mid-engined, water-cooled, and toting a base price roughly $25,000 less than the cheapest 911 at the time, the Boxster helped Porsche stave off bankruptcy well into the new millennium.

That’s the short story, and if you’re curious for more, I strongly recommend checking out Lyndon Bell’s insightful retrospective on the Boxster for Road & Track. But to gamers in 1997, the pivotal Porsche might be fondly remembered for other reasons, as it was the Boxster that starred front and center in Sony’s Porsche Challenge.

In scouring the web for information on Porsche Challenge, I held out for a cult following – a pocket of fans who regarded it as more than a shameless branding exercise to prime the pump for the automaker’s next big bet. I didn’t find evidence of one, which is strange considering the game was a modest success in Europe, and a promising technological showcase for the PlayStation in the platform’s early days.

There’s one car: it’s the Boxster. It comes in six colors (seven if you’re good enough), represented by six different drivers, each with a unique personality that will ostensibly materialize during wheel-to-wheel skirmishes thanks to the magic of artificial intelligence. (Spoiler: the best you get is a disgruntled horn blaring.) There are four courses with two variations apiece, and another “interactive” configuration that switches off random sections of track from lap to lap. That’s Porsche Challenge.

No, it’s not a lot of content. But much like how Wipeout perfectly captured the mid-’90s British rave scene with savvy graphic design and Prodigy, Porsche Challenge captured the future Porsche was selling. It was suave and polished, like a showroom or a finely-printed pamphlet of the automaker’s latest masterpiece. It helped, of course, that the first-generation Boxster is timelessly gorgeous.

There may have only been one car in Porsche Challenge, but it looked better and was more detailed than any car in any game that preceded it. Sony was proud of it, too; the back of the box touts Gouraud shading, real-time lighting, and use of engine samples from an actual Boxster. As a child, I distinctly remember being astonished at the sheer size of it from the chase cam.

Team Soho, the division of Sony Computer Entertainment Europe that developed Porsche Challenge, essentially put on a master class in manufacturing the illusion of authenticity. Even the user interface, clean and finished in the Franklin Gothic typeface Porsche used in its marketing materials, lended an air of legitimacy to the whole affair. The options concealed a short film about the making of the Boxster, ensuring the player would be acutely aware of just how big a deal the first new Porsche in 18 years was.

And of course, this would be no Mirror Mode if I didn’t stop for a moment to acknowledge the soundtrack of the subject. Jason Page, who you may know for his work on the American and European versions of the original Gran Turismo, also brought us Porsche Challenge’s score. Given the game’s small amount of content, Page didn’t slave over a ton of tunes for this title, but his contributions are nevertheless memorable. The music in Porsche Challenge transcends funk, lounge and rock and roll – not terribly unlike Need for Speed II’s soundtrack, but a little dancier. It’s a perfect fit, and the menu track in particular personally ranks as one of my all-time favorite game songs.

It wouldn’t be fair to say Porsche Challenge is all style and no substance, but in a modern context, it’s difficult not to get bored quickly. The courses, spanning Porsche’s Stuttgart test track, the United States, Japan and an Alpine location, are all dynamic and interestingly designed, but they can’t save the fact that the driving isn’t particularly fun.

Racing action follows the classic arcade model of catch the rabbit, but Porsche Challenge psyches you up for failure right from the get go. This is a hard game, not helped by the rather vague steering model. It’s certainly drivable, but still a bit heavy and all the grip shows up unexpectedly late through the corner. Optional arcade physics attempt to dial up the lunacy a bit – the game defaults to simulation – but it’s still not quite as responsive or spirited as Sega Rally or even Need for Speed III.

But Porsche Challenge’s biggest problem is its Championship mode. I doubt anyone even back in 1997 was motivated enough to play it to completion. It asks you to essentially drive all four locations multiple times over in a 12-race series – once through the short variants, then the longer ones, then in interactive mode. Then you do it all over again, only mirrored. And just when you think you’re free, there’s a final, harder round to bleed what remains of your ever dying soul.

The worst part is, there’s no points tally; you must come in first in every race, and if you don’t, you lose one of a finite number of lives. Don’t play it, it’s not worth it – there are cheats that will give you all the goodies you’d earn from the campaign, anyway.

Upon beating (or cheating) your way to the end of Porsche Challenge, you’re presented not with a 911 or a secret track, but a series of films. The first of which lasts about 45 seconds, and consists of assorted clips of Porsche’s storied motorsports history. One shows drivers running to 917s at the start of the 24 Hours of Le Mans, while another stars a 550 Spyder getting refueled in the pits.

In this day and age, it’s not hard to find these videos; the internet has made such moments so readily accessible, they aren’t special anymore. But 20 years ago, they were. And although I can say it wasn’t the sort of reward I expected as a kid, the film slowly dug its claws in me, a budding car enthusiast. It was one of the most amazing things I’d ever seen, and I wouldn’t have seen it anywhere else but in this game.

To me, that film embodies Porsche Challenge. It was like GT Sport’s Brand Central decades before Polyphony found a way to Trojan Horse commercials into games. So many years later, it’s a remarkably faithful expression of an uncertain and transformative time for a company we all have some relationship with. How many racers can you say that about?