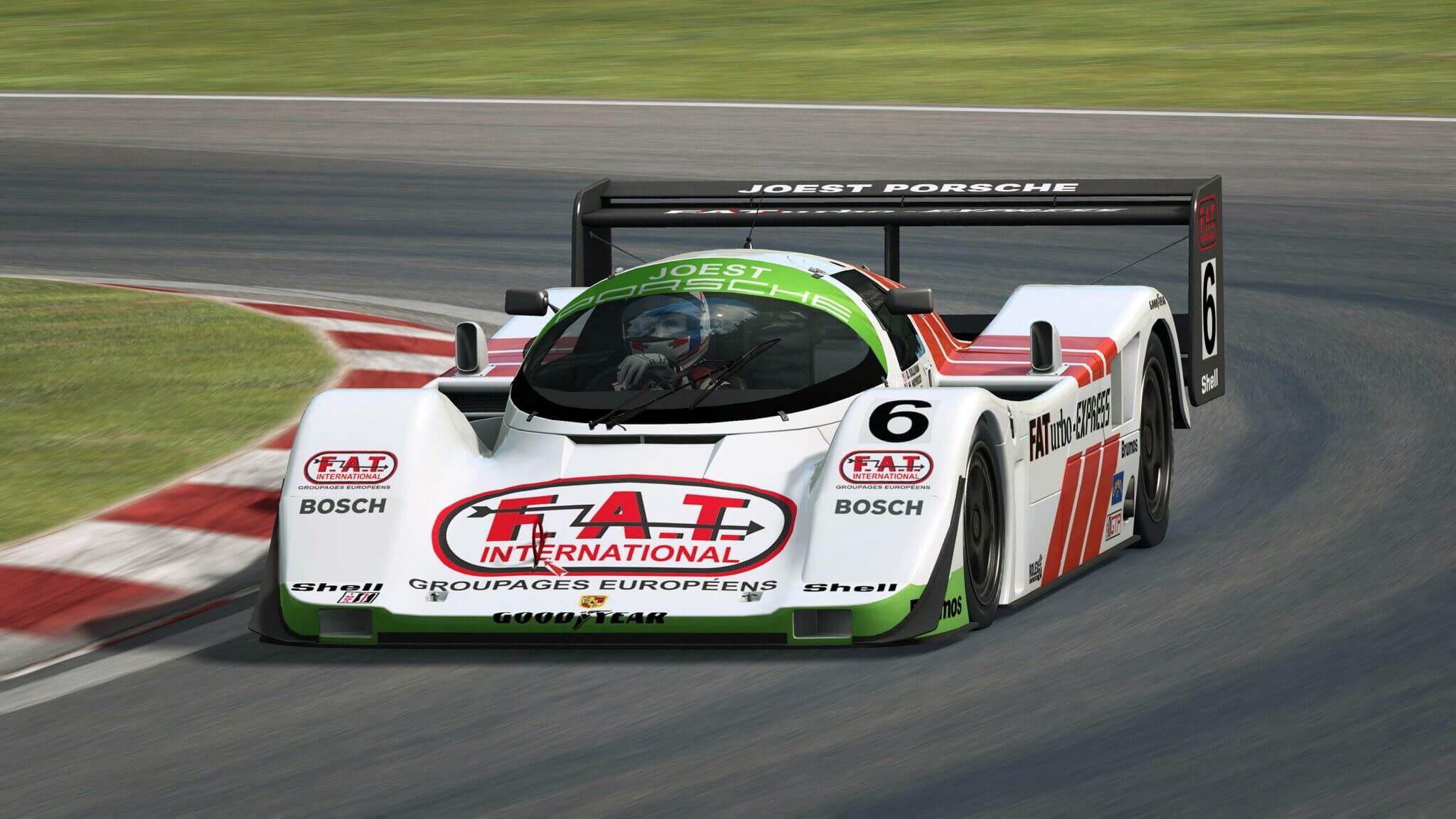 Group C truly is the dog’s bollocks. A truckload of power, tons of downforce and brutal power delivery — it’s hard to understand why the class didn’t receive more love within sim racing. With this wonderful sim racing explosion we’re in the midst of, that is finally changing.

Until the last few years, the only way to sample Group C on PC was the Prototype C mod for F1 Challenge. It took a long time, but we now have an incredible range of these beasts in Project CARS 2 and Assetto Corsa. RaceRoom will soon join the Group C party, with the recently unveiled Nissan R90CK and Porsche 962. Luckily for me, I was given the chance to drive them early.

I may have mentioned it once or twice, but the Porsche 962 in AC is one of my favourite cars in sim racing. Given my love for that car, it had to be my first port of call in R3E.

There is one main area where the car differs from its Assetto compatriot, and that’s with the aerodynamics. Rather than being in its original form, this Joest-modified variant has the magnificent double wing. That along with other modifications gave the near decade-old 962 a fighting chance against more modern machines.

These are words I’ve used to describe driving older cars before, but it really is a raw, manual experience. When you’re used to racing a spaceship on wheels in the shape of the iRacing R18, it’s shocking to witness how far the technology has come since the Group C days.

Where a modern LMP1 hybrid does a lot of the thinking for you, the 962 has none of it. It expects you to be capable of hanging onto its power. Under initial acceleration, it feels easy — but then turbo kicks in. When that happens, you just have to hope you have the ability to hold onto the squirming steering wheel. And that’s with this car in upgraded form!

With the downforce, it tempts and teases you to push it harder, but that squirming quickly becomes far more severe. The rear gets snappie as the front tyres start to laugh at you. You can almost hear it saying “you thought you were safe, didn’t you?” You have to respect it.

The best thing about all the near-death experiences? I could feel every bit of it. With the aid of a Sector3 developer, I got my FFB tuned to the point where it felt more detailed than even Assetto Corsa.

In an effort to mimic onboard shots of drivers wrestling this car, I turned up my FFB. Usually, when you crank up the FFB strength, it results in a loss of detail, but not here. You still get the detail you need to be precise with the car. Combine that with the muscle-destroying strength of the FFB and you’ve got a legitimately sweaty time on your hands.

For me, a high-quality car is intuitive. That doesn’t mean it’s easy, but it gives you the opportunity to learn the traits of a car. That is the case here. To master, the 962 is a whole different ball game.

It’s cars like this that make it easy to see why people fell in love with the racing in the 80s and 90s. The machines of the day had grip, mesmerizing power, but so much character. It makes for a daring yet fun experience. Being able to feel enough to push it to the limits, but also knowing it will bite… hard. The 962 is a beautiful, brutal machine to drive.

The joy I had driving it, makes me want to race it with others. A multi-class event with some GTO cars thrown in, anyone?

Andrew Evans · Mar 27, 2019
If you fancy getting your hands on the brand-new Thrustmaster T248 steering wheel, then Sector3 Studios has a giveaway that should be right up your street.

Andrew Evans · Mar 27, 2019· Comments
By now, we should all be used to seeing pro drivers trying their hand at esports events. Over the past couple of weeks, and in response to the near total cancellation of real-world motorsport, pros have raced against personalities in the sim-racing world in a series of exhibition races.

Andrew Evans · Mar 27, 2019· Comments
PC racing sim RaceRoom Racing Experience is truly putting the “free” into “free-to-play”. Sector3 Studios has opted to make not only the game itself but every single item of content within it free to all for the next few days.

Michael Leary · Mar 27, 2019
The first update of 2020 has arrived to RaceRoom Racing Experience, and with it comes a brand new circuit. Located in the city of Shaoxing in the eastern province of Zhejiang, China, say hello to the Zhejiang Circuit.

Michael Leary · Mar 27, 2019· Comments
The December update for RaceRoom Racing Experience is now available on PC. With it comes plenty of goodies that are appropriate for this time of the year.

Michael Leary · Mar 27, 2019· Comments
We’re coming up on the end of the year, and right on cue, Sector3 Studios has begun teasing what’s next for RaceRoom Racing Experience. The Swedish studio has revealed the next car on its way is the BMW M4 GT4.

Jimmy Broadbent · Mar 27, 2019· Comments
After some much-needed rest and recuperation over the last week or two, I’ve come back to a whole heap of new sim racing content. Over the last few days, rFactor 2, DiRT Rally 2.0 and RaceRoom have received new goodies. It always puts a spring in my step when there are new toys to play with when I get home. Of all the newly-released toys, I’ll be talking about the bonkers Volkswagen I.D. R.