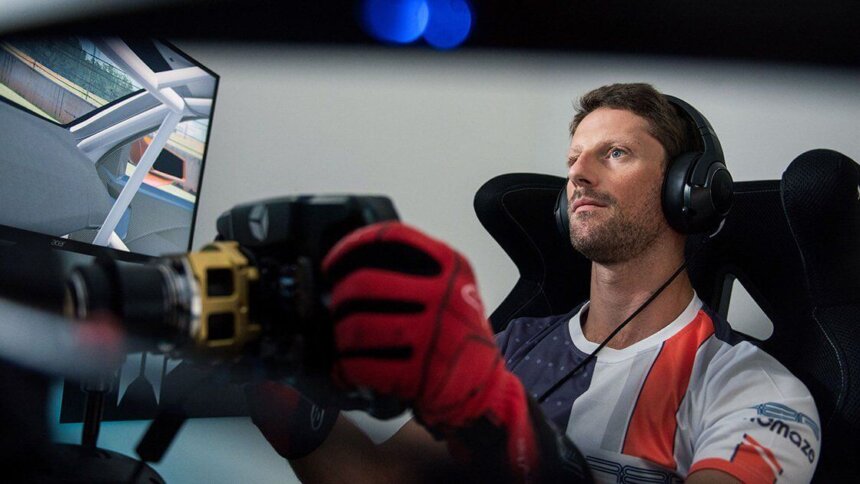 Although he left the Haas F1 Team at the end of the 2020 Formula One World Championship season, Romain Grosjean will be joining forces with the team once again, this time in F1 Esports.

The French driver departed F1 in a shocking crash, after four years at Haas. In the opening lap of the Bahrain Grand Prix, his car left the circuit after contact with Daniil Kvyat’s AlphaTauri and speared into a crash barrier at almost 120mph.

His Haas VF20 was split in half by the 67G impact, with the front section puncturing the barrier and the halo device deflecting the metal away from Grosjean’s head. Having survived that he spent almost half a minute inside a fireball, before escaping his car and getting to safety with the help of Dr. Ian Roberts.

Grosjean has now moved to race in IndyCar this season, and actually made his debut in the series virtually last week. However, he’d previously set up his own esports team, called R8G Esports, and it’s through this that he continues his partnership with Haas.

It’s quite a handy lineup to call on too. Among others, R8G’s squad includes GT Sport World Tour finalists Baptiste Beauvois and Randall Haywood, and multidisciplinary champion — and current Formula E Accelerate points leader — Erhan Jajovski. There’s also F1 Esports experience in Thomas Scibilia, and of course Grosjean himself is part of the squad. Like all the other teams, Haas will have to choose a wildcard driver from the 2021 Pro Draft later this year in addition to its selected driver lineup.

“I’m delighted that we get to utilize Romain’s enthusiasm for esports and R8G Esports’ expertise to oversee our continued participation in the F1 Esports Pro Series. It’s an important step up for us in terms of our involvement from previous seasons. We know we’re partnering with a group that truly understands the demands of the esports environment and can help take our program to the next level.

2021 F1 Esports ChampionshipRomain Grosjean
0 Comments Discuss this post in our forums...
Test Your Badge Knowledge With Our Car Logo Quiz

Gran Turismo Sport 3794 Apr 14 by Andrew Evans
With a week to go until the racing action gets underway, Polyphony Digital has announced the full schedule for the first round of this season’s FIA Gran Turismo Online Championship.…

WRC Series 25 Apr 13 by Andrew Evans
Nacon and KT Racing have announced the next entry in the WRC series, the official game of the World Rally Championship. WRC 10 will arrive later this year, and brings…

Esports 79 Apr 12 by Andrew Evans
Just like the real thing, F1 Esports has something of a gender imbalance. In four seasons to date, no female driver has ever taken part in an official F1 Esports…